The U.S. Coast Guard cutter Narwhal operates with a small 12-person crew. It was dispatched to the Conception the night it caught fire off of Santa Cruz Island. Photo credit: Anne Miller

The small 12-person crew of the Newport Beach-based Coast Guard cutter Narwhal has been through many operations together, and each one was an intense exercise in teamwork.

But when Lt. j.g. Caroline Miller, the commanding officer of the 87-foot Narwhal, was directed to dispatch the vessel to the search-and-rescue mission of the Conception boat fire on Labor Day, crew support played an even bigger role.

In a couple of hours, the Narwhal came to the scene of one of the largest maritime tragedies off of the entire U.S. coast. The 75-foot Conception had become engulfed in flames and sunk.  Thirty-four lives were lost.

“We all know what this job entails. We know that we could see some pretty horrific things, but there’s no way to prepare for it,” said Nicholas Olsen, the fireman aboard the Narwhal who was tasked with searching for survivors.

Miller said that a mission of this scale was infrequent for her crew. “You hope it never happens. But it’s one of those times when you take all of your training and experience and put it together to try to offer the best response.” 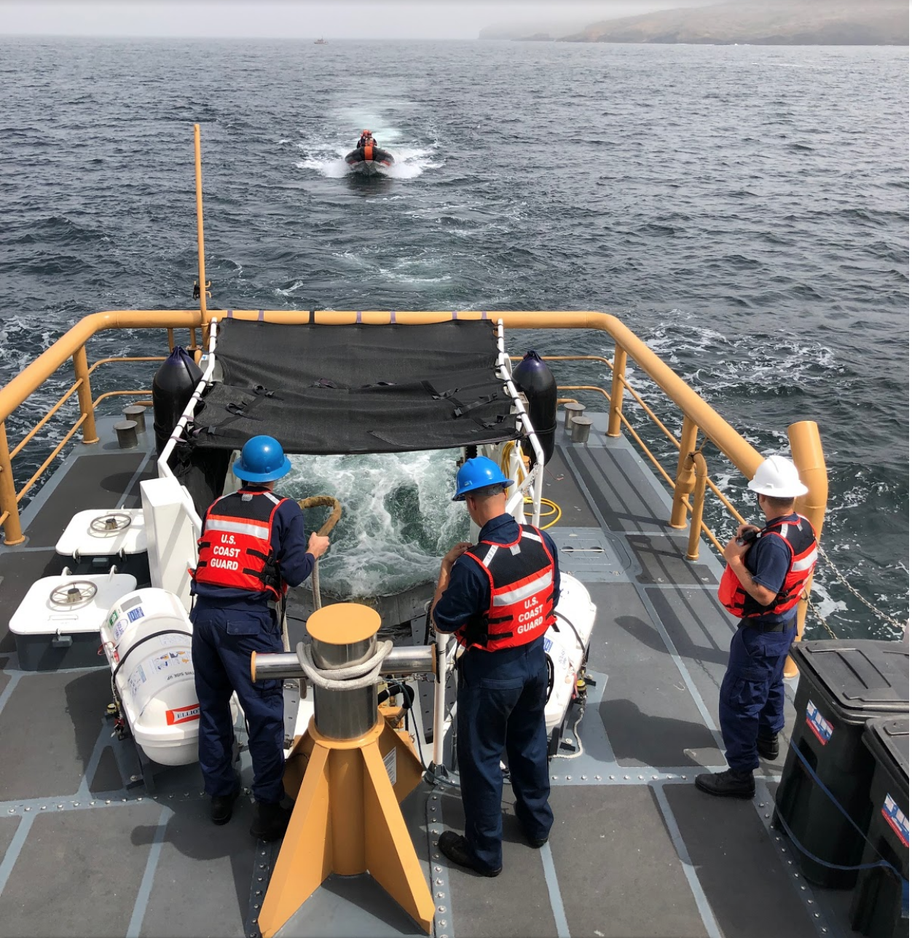 A small boat recovery of the U.S. Coast Guard cutter Narwhal while on the scene of the Conception fire mission. Photo credit:  Caroline Miller

“When you’re out there… and you’re doing your job, it's easy to get in a zone, and you don't think about the bigger picture,” said Olsen. “The toughest thing is when you get back onshore, and you start seeing how the families are affected...that’s when it becomes real.”

All members of the Coast Guard receive CISM (Critical Incident Stress Management) training to help prepare them for their difficult work. However, following events like the Conception fire, crews often require additional help.

“They do one-on-one interviews to try to help you take the images that are in your head, and try to rationalize them and come to grips with what you’ve seen,” said Olsen of how the Coast Guard sends out peers trained in stress management to do an initial assessment of the crew.

That’s when the crew’s camaraderie becomes part of the emotional support they provide each other.

“The biggest thing is talking about it to someone,” said Olsen. “You don’t want to keep that to yourself.” He says that because the Narwhal crew is small, they are close-knit and can discuss anything that comes up.

“At that point, rank doesn’t matter,” said Miller of the crew's open communication.“You just really want to have the ability to reach out in case you’re working through this issue.”

As a woman in her mid-20s, Miller says that most of her experience with the Narwhal has been wonderful and that she loves the feeling of being out at sea. However, after the Conception mission, she says it was nice to dock and reconnect.

“I came home and just called a lot of people and said, ‘Hey, I was thinking of you,’” she said. “It really helps you prioritize things because it’s easy to get lost in the small day-to-day problems. And then when something like this happens, and you get home and you step away from the job a little, then you're able to reflect a little. You get to see the big picture, and my heart goes out to the people who are still dealing with this. I know it’s a life-changing event.”