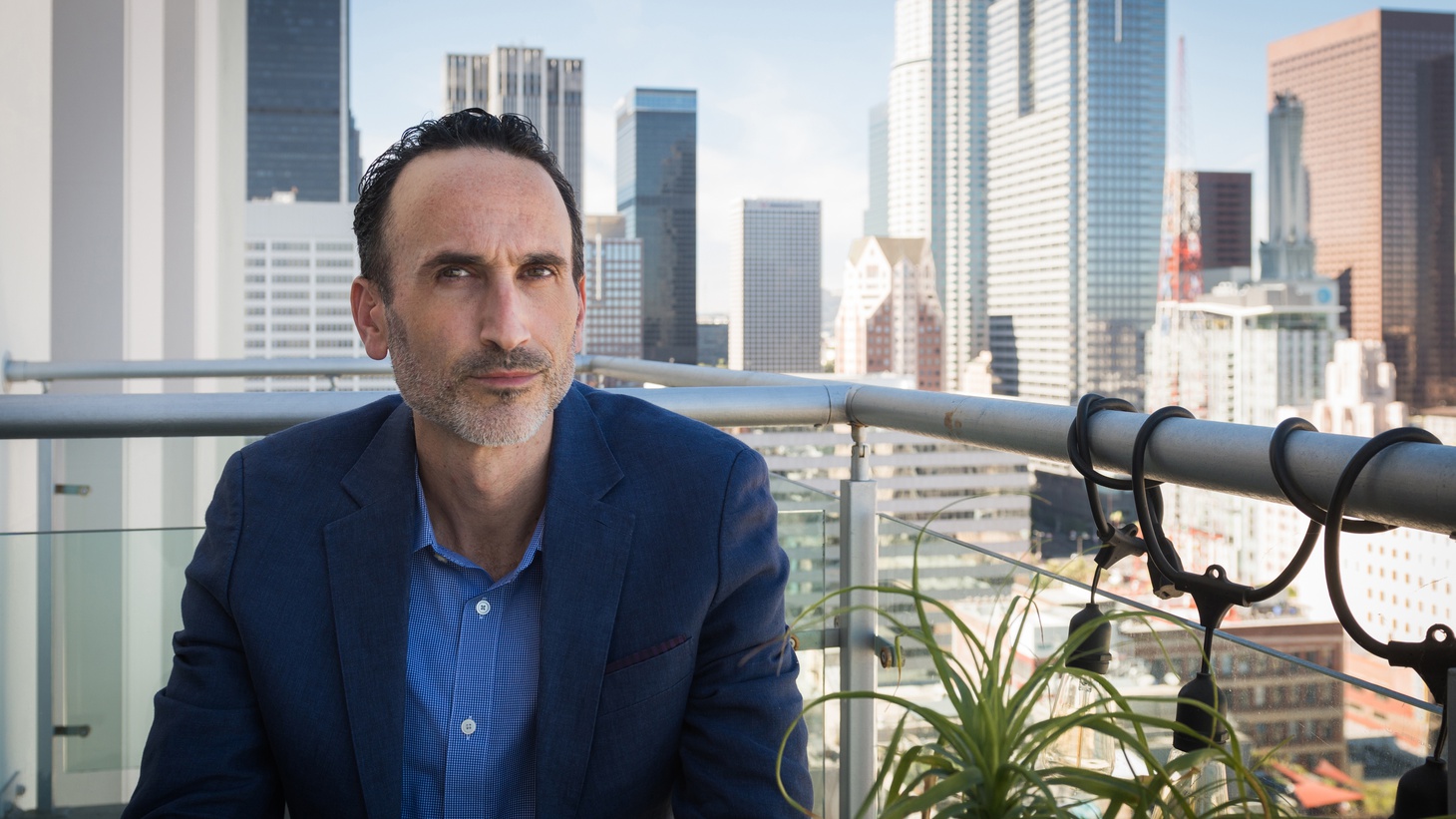 Dr. Daniel Turner-Lloveras regularly fields questions about COVID vaccination from immigrants being held in U.S. detention facilities, part of a broader covid information campaign spearheaded by California advocacy groups. Turner-Lloveras says lack of trust is a major reason tens of thousands of detainees have refused vaccination. “When someone doesn’t have confidence in the people offering the vaccine, many people are going to decline it.” Photo by Heidi de Marco/KHN.

The sounds of wailing ambulances, car horns, and bustling traffic filtered into the high-rise home office of Dr. Daniel Turner-Lloveras in downtown Los Angeles as he settled into a brown leather couch to take a call.

On the other end of the line, staring at a mint-green wall inside a plexiglass phone booth with little privacy, sat Pedro Figueroa, 33, a detainee at the U.S. Immigration and Customs Enforcement Mesa Verde detention facility in Bakersfield, California.

“Is it mandatory to get the booster?” Figueroa asked in Spanish. “And why do I need it?”

Turner-Lloveras, who specializes in internal medicine, fields questions like these once a week as a volunteer physician for the COVID-19 Vaccine Education & Empowerment in Detention program, or VEED, a collaboration between the California Collaborative for Immigrant Justice and the Latino Coalition Against COVID-19, an organization he co-founded. They launched the program last April to provide vaccine education to immigrants who have been arrested for being in the U.S. without proper documentation and are awaiting a court hearing or deportation.

Licensed medical providers volunteer to talk by phone with immigrants housed in ICE facilities. Conversations last five minutes to half an hour, and volunteers cover a two-hour shift once a week.

“On average, I’ll talk to four people. The majority of the calls are in Spanish, about 80%,” said Turner-Lloveras, who is proficient in Spanish. “But it varies. One day there was no Spanish, and it was English and Mandarin. I used my phone’s real-time audio translation, and that worked fairly well.”

April Newman, VEED’s program manager, said providers are not pressuring anyone to get vaccinated. “It's really each individual's choice,” she said. “But we want to make sure that they're equipped and empowered with sound and accessible information.”

ICE has seven detention centers in California, six of them managed by private prison companies. In the two years since the pandemic took hold, covid outbreaks have plagued detainees in recurring waves, sweeping through almost every facility in the state. As of March 14, ICE had recorded more than 2,000 cases of covid infection and one covid-related death at its California facilities, according to agency data. Nationwide, ICE has recorded more than 40,000 cases among detainees and 11 deaths.

The California facilities have been the target of lawsuits alleging lax efforts to prevent and contain covid outbreaks. The Mesa Verde facility, where Figueroa is being held, was the subject of a class-action lawsuit filed by the American Civil Liberties Union and other groups alleging crowded, unsanitary conditions and failure to adopt safety protocols recommended by the Centers for Disease Control and Prevention. Government documents uncovered in the case revealed that at one point Mesa Verde officials purposely limited covid testing to avoid having to isolate detainees who tested positive.

Under a settlement reached in January, immigration officials agreed to adhere to numerous covid-related protections for the next three years, including sharp limits on the detainee population to allow for adequate distancing and regular testing. In addition, hundreds of immigrants who were released because their health made them especially vulnerable to covid cannot be returned to detention unless they pose a public safety risk.

The settlement includes new protocols for vaccine outreach, including requiring ICE and GEO Group, the private prison contractor that manages Mesa Verde, to offer covid vaccines to detainees during the 14-day quarantine period after they are booked into custody and to provide booster doses consistent with CDC guidance. If a detainee initially declines vaccination, but later has a change of heart, the facility is to administer a vaccine at that person’s request.

“It should not take litigation to ensure that ICE provides public health-informed vaccine education and promptly administers vaccines and boosters to people in custody. These are absolutely critical measures to protect people in custody from the ongoing threat of covid-19,” said Bree Bernwanger, a senior attorney with the Lawyers’ Committee for Civil Rights of the San Francisco Bay Area, one of the groups that sued.

As of Feb. 21, nearly 34,000 detainees in U.S. detention facilities had declined vaccination, according to figures provided by ICE. In the same period, more than 53,000 received one.

Turner-Lloveras said the big barrier is a lack of trusted messengers. “When someone doesn’t have confidence in the people offering the vaccine,” he said, “many people are going to decline it.”

According to ICE's covid protocols, vaccine information is provided at intake in numerous languages. Still, Newman, VEED’s program manager, said detainees in some facilities have reported a markedly inconsistent approach to providing vaccines, boosters, and education.

“Programs like VEED are critical,” said Jackie Gonzalez, policy director for Immigrant Defense Advocates, a group working to abolish detention facilities in California. “Because we know individuals who are detained don’t trust the people who are detaining them, especially when the detaining party has been a private corporation that has failed them time and time again on issues of health and safety.”

Figueroa, originally from Michoacán, Mexico, has been at the Mesa Verde facility since November awaiting a court date on his deportation case. He said he was brought to the U.S. without documentation as a child and picked up by ICE following a recent arrest. He declined to discuss the nature of the arrest, saying he had been advised that discussing his case could hurt his legal effort to stay in the U.S.

In detention, Figueroa said, he initially declined a vaccine because he felt he had insufficient information about safety and side effects. He had heard the Johnson & Johnson vaccine has been linked to a rare but life-threatening side effect involving severe blood clots.

“I told the nurse that I heard bad reports on Johnson & Johnson. If I wanted to get vaccinated with one of the other ones, could I have more information?” Figueroa recalled. “Her response was, ‘We’re offering J&J. Do you want it or not?’ So I didn't get it.”

Eventually, Figueroa got the Pfizer vaccine. But he had questions about booster shots and other covid-related issues. Turner-Lloveras, he said, didn’t treat him like a detainee.

“I feel like I was treated like just another person who called for information,” said Figueroa. “I feel more comfortable receiving medical information from someone on the outside, so that I can make these decisions.”

The pilot program started with 20 physicians on call across the country. They recruit volunteers on an ongoing basis and currently have several active doctors. For now, they are providing services in four detention centers in California where detainees have specifically requested outside medical advice, and hope to expand nationwide.

The call between Turner-Lloveras and Figueroa lasted about 18 minutes. Figueroa asked about the risks of people mixing different brands of vaccines from the initial doses through the booster, as well as the possibility of false-negative test results.

After the conversation, Figueroa decided to get the booster when he becomes eligible in three months. “The hope is that I won’t be here, but if I am, I’m going to get it to protect myself and protect others,” he said.

KHN (Kaiser Health News) is a national newsroom that produces in-depth journalism about health issues. Together with Policy Analysis and Polling, KHN is one of the three major operating programs at KFF (Kaiser Family Foundation). KFF is an endowed nonprofit organization providing information on health issues to the nation.