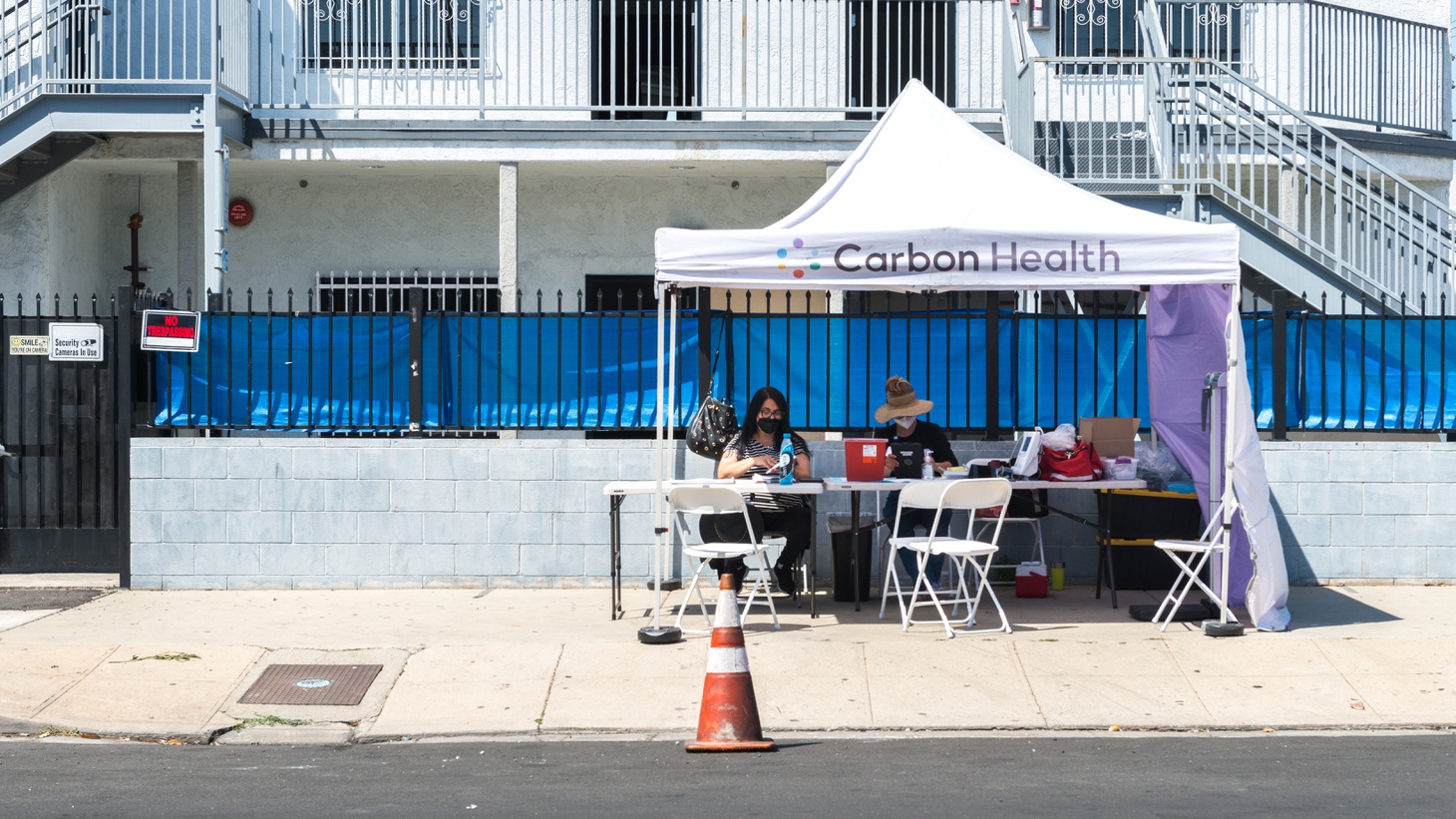 Nurse Gita Ahadi and community organizer Mari Mercado wait for people to show up at Carbon Health’s pop-up vaccination clinic in South Central Los Angeles, across the street from South LA Cafe. Mercado is offering a $50 gift card to encourage people to get vaccinated. Photo by Heidi de Marco/KHN.

LOS ANGELES — Nurse Angel Ho-king sways her head to the sound of salsa music as she waits for people willing to roll up their sleeves to get a shot. Ho-king is part of a four-person crew staffing a COVID-19 vaccine table at a health fair in Rampart Village, a predominantly immigrant neighborhood about 10 minutes from Dodger Stadium.

In three hours on a recent Saturday, Ho-king and Brenda Rodriguez, a medical assistant, vaccinated 16 people — far fewer than they had anticipated. Nearly everyone who showed up at the fair, organized by Saban Community Clinic, were adults seeking booster shots or young children getting a first dose (children ages 5 to 11 became eligible for a vaccine late last year).

As COVID infections have declined, so too has interest in COVID vaccines — even though the shots are highly effective at preventing serious illness and death from the virus.

In California’s most populous county, where more than 1.7 million people have not received even one dose, vaccination events have turned desolate. About 46,000 county residents got their first dose in March, a 79% decline from January, according to the Los Angeles County Department of Public Health.

Those who remain unvaccinated are harder to convince, telling health care workers and vaccination coordinators that they don’t feel a sense of urgency.

According to a January survey by the Public Policy Institute of California, about 1 in 10 California adults said they definitely won’t get vaccinated, which has remained consistent since January 2021, and 86% of unvaccinated adults said the omicron variant wasn’t enough to persuade them. Employers and businesses are dropping or rolling back vaccination mandates. And although proof of vaccination once offered perks, such as allowing people to go maskless indoors, face coverings are generally no longer required in California.

At a recent vaccination drive coordinated by an immigrant advocacy group in Palmdale, near Lancaster in northern LA County, only two people showed up over four hours, both for second doses. As of April 1, 25% of Palmdale residents ages 5 and up were unvaccinated, compared with 17% of county residents, according to county data.

Jorge Perez, Salva Organization’s vaccine coordinator, spent a week promoting the event with his team, going door to door, visiting local businesses, and publicizing it on social media. At previous vaccine drives, “We got 42 people, then 20, then four,” said a disappointed Perez. “Now two.”

Perez reduced the number of staffers at vaccination events from five to two in February as the numbers started to dwindle. 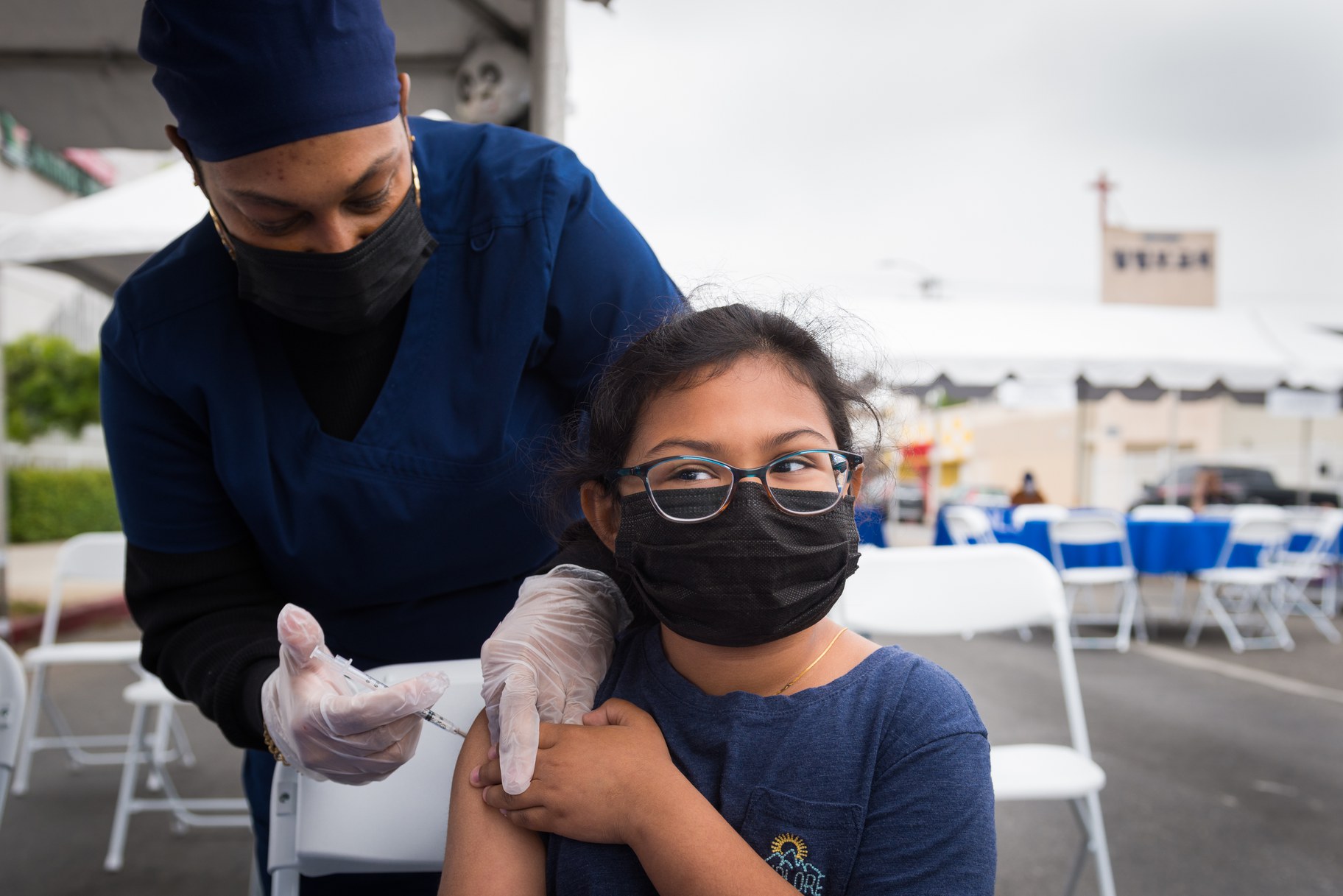 Sneha Rahaman, 7, receives her first dose of the COVD vaccine from nurse Angel Angel Ho-king in Rampart Village. “It hurt a little bit, but not that much,” she says. “It’s going to make me safe.” Photo by Heidi de Marco/ KHN.

Much work remains to be done to combat vaccine misinformation, especially given the spread of BA.2, an Omicron subvariant that is highly transmissible, said Dr. Richard Seidman, chief medical officer for L.A. Care, a public Medicaid insurance plan that serves county residents. The number of COVID cases and hospitalizations had been declining since February, but the county is again seeing a bump in cases, according to data released this week.

People have various reasons for remaining unvaccinated, Seidman said. “For some, it’s distrust of the government or health care providers in general,” he said. “Some are more cautious and want to take a wait-and-see approach. Others simply don’t believe the science.”

A study published April 11 by JAMA Internal Medicine shows just how entrenched views are. Many people who refused to get vaccinated early on said they were waiting for the shots to get full approval from the FDA. But when the agency’s first full approval of a COVID vaccine came in August 2021, the study concluded, it did little to change people’s minds and “had little immediate impact on vaccination intentions.”

In California, unvaccinated people were nearly 14 times as likely to die from COVID as people who had been fully vaccinated and received a booster dose, according to state data from March 7-13.

Perez said people getting their first shots now are doing so mainly because they feel obligated — to meet a work requirement, for example, or enter places such as restaurants, bars, and gyms that require proof of vaccination.

That was the case for Modesto Araizas, one of the two people who showed up at the Palmdale vaccine event. Despite contracting COVID twice, missing work, and having a hard time breathing, he didn’t get vaccinated until he needed proof of vaccination to eat at his favorite seafood restaurant.

Until recently, the federal government reimbursed doctors, hospitals, and other providers for tests, treatments, and vaccines for uninsured people. But the Health Resources and Services Administration stopped accepting reimbursement claims for tests and treatments March 22, and for vaccinations April 5.

Many uninsured people now will likely need to pay out-of-pocket for tests and other services.

Perez is hoping people might become more open to vaccines if COVID tests become too expensive for them. No one will want to keep paying for tests when they can just get a shot, he reasoned.

Nurse Roxanna Segovia works at a pop-up vaccine and testing clinic across the street from South LA Cafe in South Central LA. She recently spent 45 minutes trying to persuade a man who had visited the clinic regularly for free tests to get vaccinated.

“He gave me all the reasons he has not been vaccinated, like his civil rights were being violated and Bible verses,” Segovia said. “His job requires it now, and he said he was losing money by missing work waiting for test results. If he continued this way, he wouldn't be able to feed his family, but even so, he still wasn’t sure if he was making the right choice.”

At the end of their conversation, he got the shot.

This story was produced by KHN (Kaiser Health News), a national newsroom that provides in-depth coverage of health issues and that is one of the three major operating programs at KFF (Kaiser Family Foundation). KHN is the publisher of California Healthline, an editorially independent service of the California Health Care Foundation.