More than a name: Anaheim’s ‘Little Arabia’ could be officially recognized 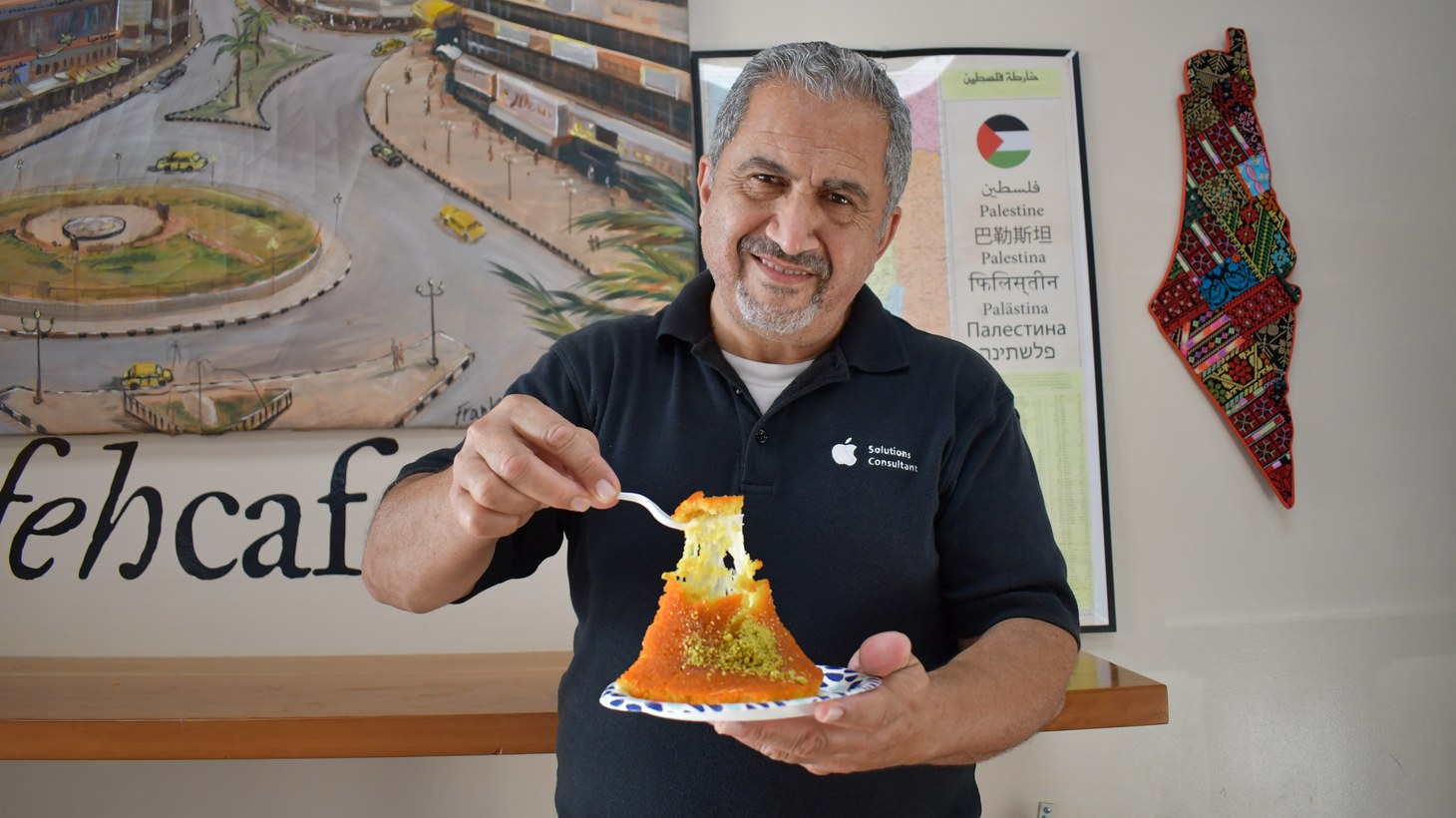 Asem Abusir opened Knafeh Cafe in Little Arabia more than a decade ago to sell his family’s longstanding take on the beloved Middle Eastern dessert called knafeh. “We chose Anaheim because we saw the growth of the Middle Eastern community,” says Abusir. Photo by Laura Kondourajian/KCRW

For decades, Arab Americans have known where to go for the best hookah lounges, cultural markets, and Middle Eastern food: a thriving stretch of Brookhurst Street in Anaheim that’s unofficially called Little Arabia.

After years of campaigning by community members and business owners, the Anaheim City Council will consider officially recognizing the area by that name too.

The council will hear a motion today that would designate Little Arabia in title and as a business district like Little Saigon in Westminster and Orange County Koreatown in Garden Grove.

A long fight for a designation 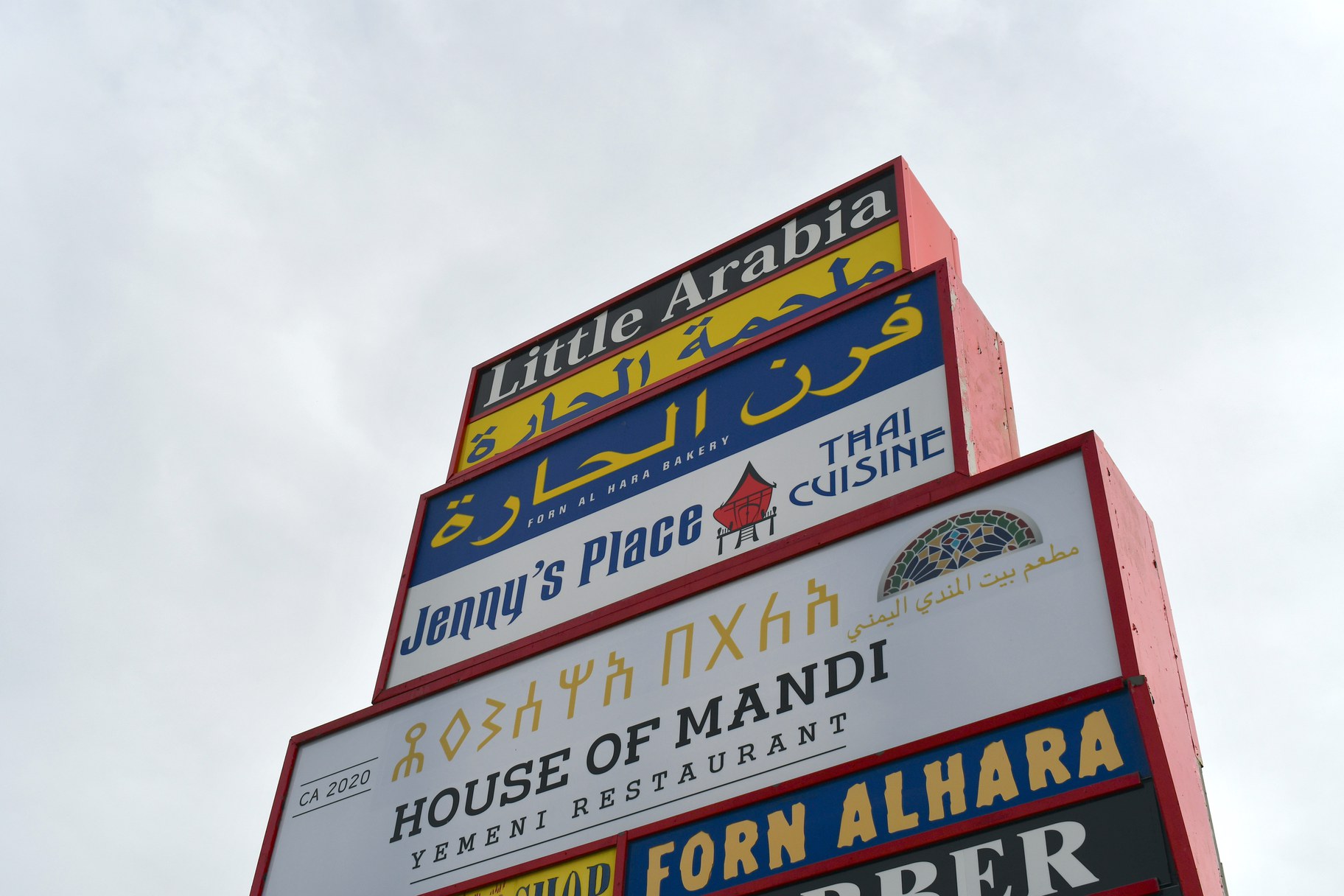 This strip mall on Brookhurst St. in Little Arabia is filled with Middle Eastern businesses and other cultural eateries. Many Arab Americans say they come to Little Arabia because it is a home away from home for them. Photo by Laura Kondourajian/KCRW

The area now known as Little Arabia grew to be a cultural destination after the still-standing Altayebat Market was opened in the early 1980s. Over the next few decades, more Middle Eastern businesses followed, filling the stretch of Brookhurst Street between Interstate 5 and Katella Avenue and its surrounding area.

What the community calls Little Arabia was a home away from home for Al-Dabbagh, who drove down from Pasadena when he was a young immigrant.

Arab Americans aren’t the only residents who support the official designation. A poll of Anaheim registered voters conducted by the Arab American Civic Council and the U.S. Immigration Policy Center at UC San Diego found more than half of all respondents support officially designating the area as Little Arabia. That number jumps to more than 75% for those who said they had actually been to the area.

However, despite the widespread support, many Anaheim City Council members have long been hesitant to discuss officially designating Little Arabia.

It took a FBI corruption probe into the city and the resignation of former Mayor Harry Sidhu to prompt changes in city policy that allowed for the discussion to be put on the agenda.

Al-Dabbagh says City Council members have given a wide range of reasons, including ideological, for why they haven’t had a proper discussion on the matter.

“I remember last year, the mayor said, ‘Well it’s a diverse area and what about all these other ethnic groups that live in there?’ I think that was simply an excuse,” says Al-Dabbagh. “The real reason why there’s no designation is unknown.”

Advocates behind the push to designate Little Arabia say they aren’t trying to exclude any communities in their efforts and that they know the area is very diverse.

In fact, Al-Dabbagh says the Arab American businesses have helped revitalize the once seedy part of town into a vibrant place where all businesses can thrive. 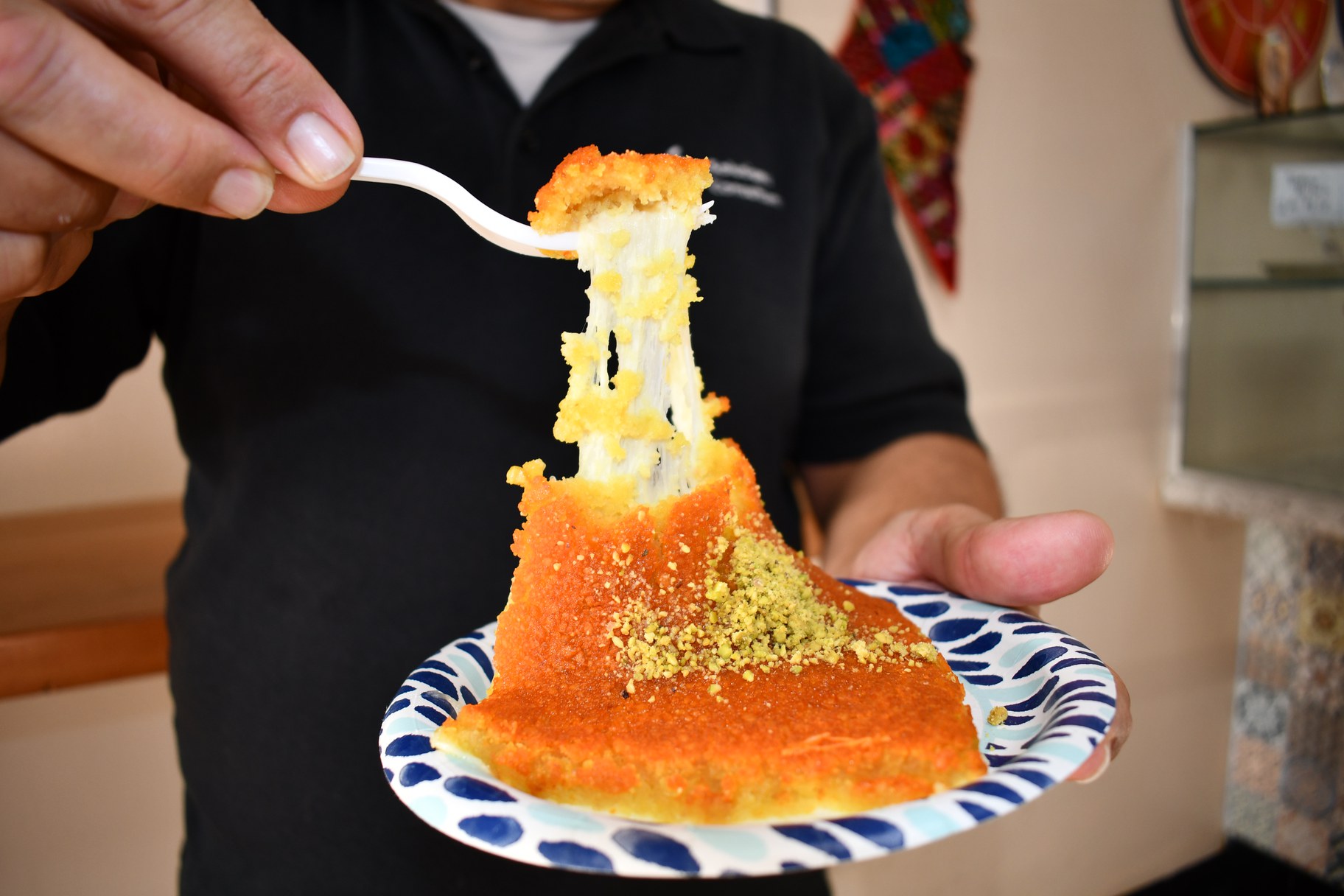 The knafeh sold at Knafeh Cafe is an inherited recipe from the Palestinian city of Nablus. It is a cheese dessert topped with buttery, shredded phyllo dough and pistachio crumbles, and soaked in a homemade simple syrup. “We use the original Knafeh recipe, which people miss,” says Abusir. “We get a lot of feedback and reviews saying this is … as close to the one they tried back home.” Photo by Laura Kondourajian/KCRW

One of the dozens of businesses that call Little Arabia home is Knafeh Cafe, which serves the popular Middle Eastern dessert knafeh.

Its owner Asem Abusir says an official designation could be the final push that businesses like his need, especially while they are dealing with the economic fallout from the COVID pandemic.

“We chose [to open up in] Anaheim because we saw the growth of the Middle Eastern community in Anaheim and surrounding cities,” says Abusir.

Abusir came to the United States in the 1980s and worked as an engineer for more than three decades before deciding to open his business with his family in Little Arabia in 2013.

He uses an inherited recipe from the city of Nablus, handed down to him from his family in Jordan and Palestine, to make the popular cheese pastry that is topped with buttery, shredded phyllo dough and pistachio crumbles, and then soaked in a homemade syrup.

“[I] decided if we have such a good recipe, why not carry on the family tradition?”

Abusir’s business has found success in Little Arabia, in part, because it is located near Disneyland and other attractions, bringing in tourists looking to try new food. He says that could increase if Little Arabia is designated.

The official designation could also mean the cultural district would be acknowledged in city materials, and signs could be erected notifying visitors of Little Arabia’s location.

Aside from visitors to Anaheim, Abusir says his customers of Middle Eastern descent keep coming back to Knafeh Cafe because they say he makes the most authentic knafeh they’ve had in the United States.

“We get a lot of feedback and reviews saying this is … as close to the one they tried back home,” says Abusir.

That familiar feeling of comfort is the throughline for Abusir and other advocates behind the push to designate Little Arabia.

“I just get that feeling that I am back home, and I [also] hear it from other people when they come from Sacramento or the Bay Area,” says Abusir. “They say, ‘We love coming to this area because we feel we’re back home. We feel we have traveled to the Middle East.’”