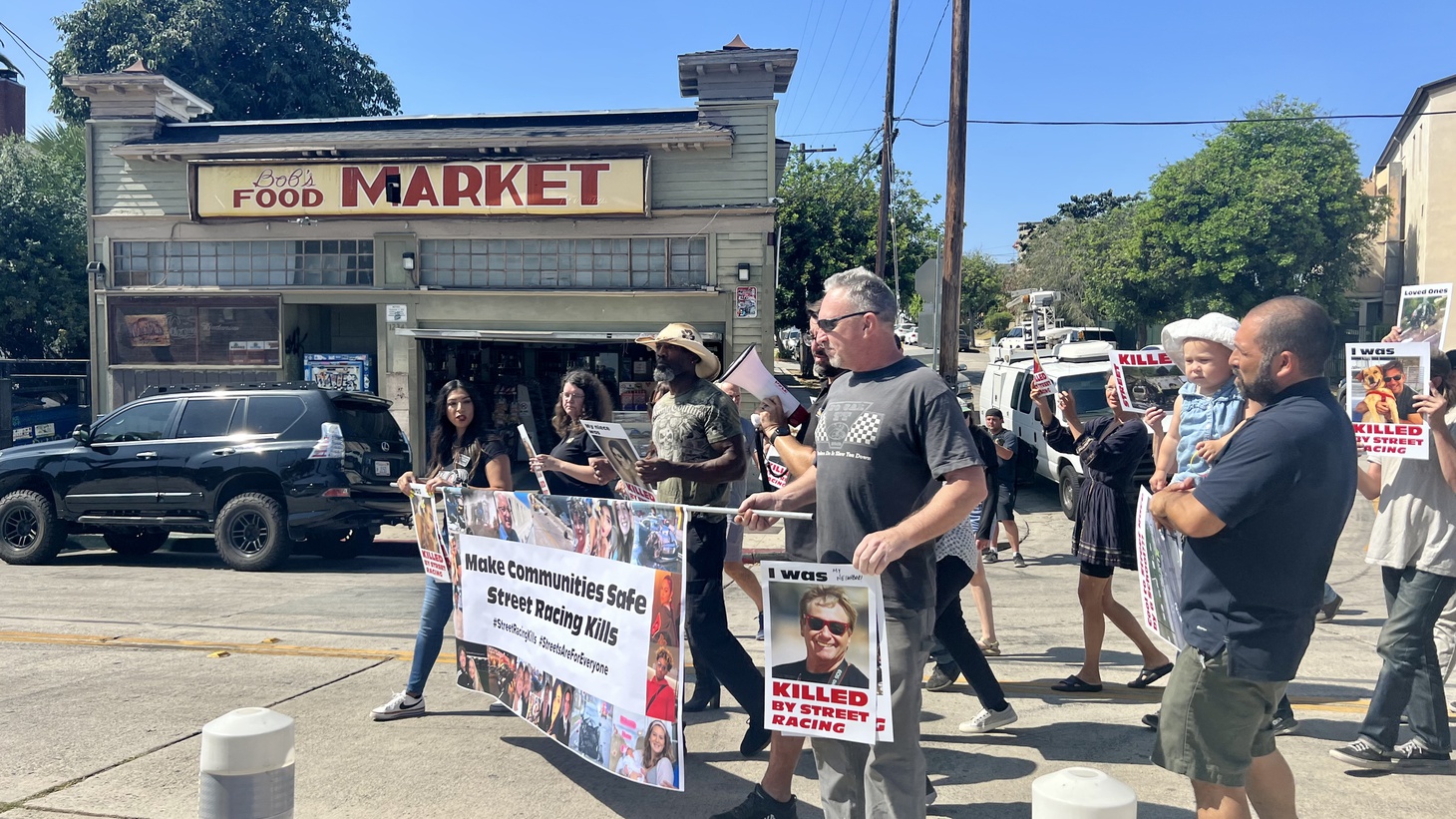 Angelino Heights residents carry signs saying “I was killed by street racing” and “make communities safe, street racing kills,” as they march in front of Bob’s Food Market, aka Toretto's Market & Deli from “The Fast and the Furious.” Photo by Rebekah Ludman.

“Fast and Furious” movie fans rev up their engines while doing donuts and spewing exhaust at all hours of the day and night in Angelino Heights, near Echo Park, and residents say they are fed up. Some parents say the dangerous driving has made their kids too scared to go outside, thinking a car will lose control.

The area’s residents blame NBCUniversal, which has released nine “Fast and Furious” movies so far, all filmed in Angelino Heights. As the studio recorded scenes here for 10th installment, residents say the franchise glamorizes street racing and car stunts, and they want the production team  off their streets.

“If you’re seeing that and you’re experiencing that every single day, where your heart drops every single time there’s a screeching car in front of your house that looks like they’re practically going to crash into your car or your property, you better bet your family is going to be affected,” says Bella, an Angelino Heights resident who works in the entertainment industry and declined to give her full name out of fear of retaliation from NBCUniversal.

Last week, Streets Are For Everyone, an advocacy group that aims to reduce traffic fatalities, helped the residents organize a protest in the neighborhood while film crews shot nearby.

Some residents don’t understand why the studio has to film in Angelino Heights at all.

“I’m sure for all the money that they are spending … they can build a set,” says Planaria Price, who has lived in the neighborhood for 50 years. “They did that with ‘Charmed,’ they filmed the pilot there, they immediately built a set of the inside, they came for exteriors.”

Price says a local house that serves as the home of Dominic Toretto, the main character in the “Fast and Furious” movies wouldn’t be hard to portray on a soundstage because it “is not that complicated, they can certainly build a facade and just leave our neighborhood out of it.”

NBCUniversal did not respond to KCRW’s requests for comment for this story.

People in the community mainly want the studio and fans to be respectful of the neighborhood. They also hope to work with the city to re-engineer nearby streets to stop stunts and racing in the area. For example, one broad intersection could feature more green space in a traffic circle so the wide streets are less inviting.

Residents’ ultimate goal is to see their community back to how it was before fans started pouring in with their cars.

“What has our community come down to? Where is the sense of family value here and peace? We don't have peace,” says Bella, who bought her home here 17 years ago when it was a quiet neighborhood. “And not until something gets done will we have that back the way it was, when we first initially moved into an area we thought would be the perfect place to raise our family.”

For now, filming has wrapped up in Angelino Heights, and “Fast and Furious 10” is expected to hit theaters in May 2023. Residents hope the studio won’t be back in their neighborhood if another installment is made.