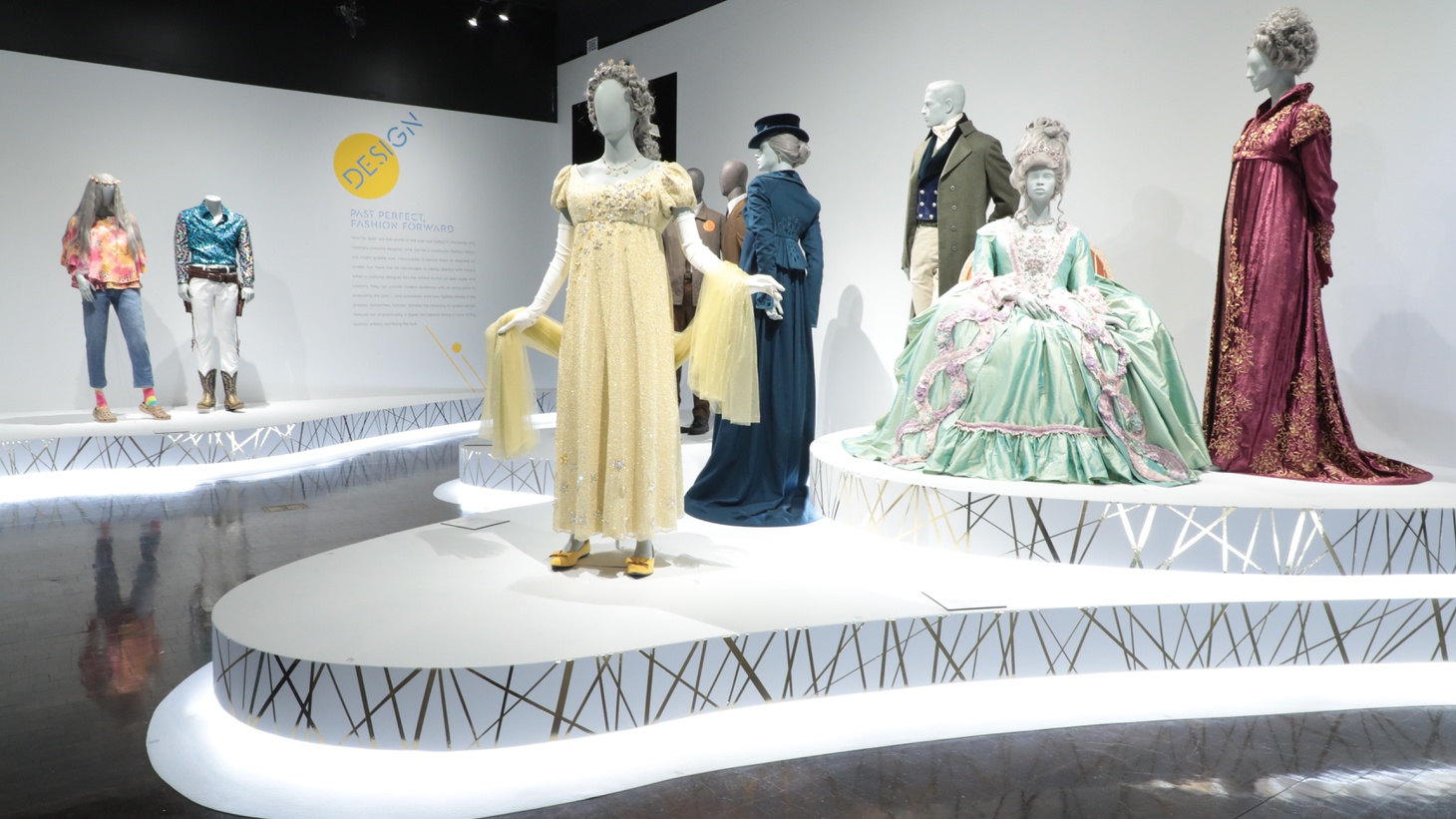 More than 20 Emmy Award-nominated shows, including Netflix’s “Bridgerton” and HBO’s “Euphoria,” are featured in this year’s “Art of Costume Design in Television” exhibit at the FIDM Museum. Photo by Benjamin Shmikler/ABImages, courtesy of the FIDM Museum.

The Emmy Awards will take place on September 12, and the TV Academy has partnered with the Fashion Institute of Design and Merchandising (FIDM) Museum for the annual “Art of Costume Design in Television” exhibit. It highlights styles from more than 20 popular shows, including sumptuous Regency era gowns on Netflix’s “Bridgerton” and mid-century looks on Amazon’s “The Marvelous Mrs. Maisel.”

How has screen size impacted the way designers are approaching costuming for TV?

[Many people] view the shows on a small little iPhone, and a lot of times you really have to concentrate on the power of color [and] the power of texture.

I think what’s even more important now is that three-quarters shot. You really don't know what the cameraman will zoom in on, so the costume designers have to think even more so about the small details: the lapels, the jewelry, and the hats.

Also what's changed is the quality of the film and TV. It's gotten so much sharper. Before there were so many rules about colors that you couldn't use, and a lot of that now is out the door.

What costumes from “Bridgerton'' are on display? 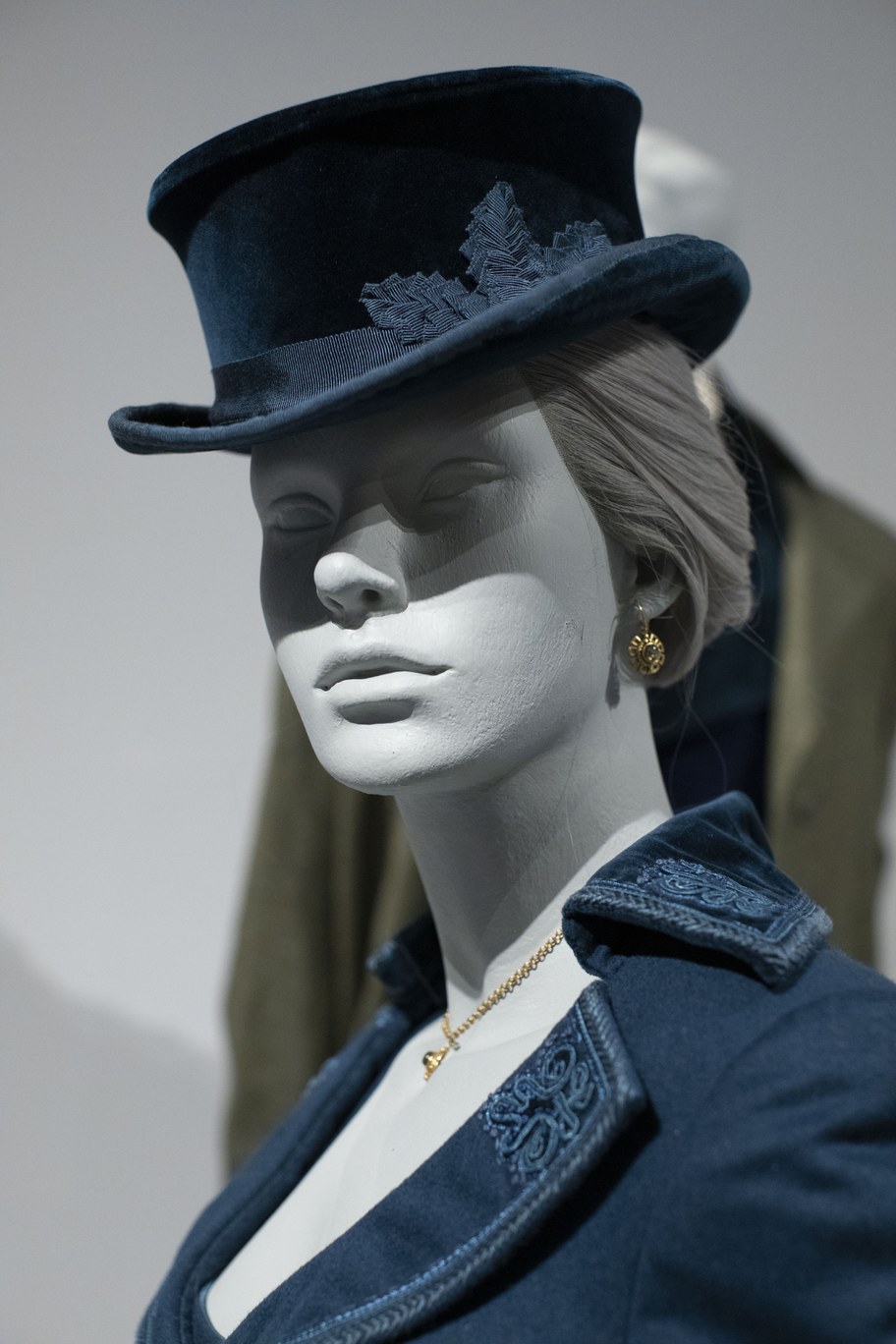 The costume designer for Netflix’s “Bridgerton” incorporated contemporary references into the period costumes on the show, like this wool hunting suit worn by the character Kate Sharma. Photo by Benjamin Shmikler/ABImages, courtesy of the FIDM Museum.

There's been a lot of talk about the costumes on the show and whether or not they are period-correct. The show’s costume designer actually said in an interview that … there is a period-correct foundation to the [show’s] costumes and designs, but she likes to add contemporary aspects.

A lot of the fabric is … of this time. … For example, [the show features] the Sharma family who are of Indian descent. The costume designer wanted to make sure to pay homage to their Indian heritage in their Regency-style period costumes. So you see that with the uses of gold, teal, and jewel colors, as well as a lot of embroidery in lapels.

We have a great hunting suit worn by Kate Sharma on display. It’s a deep teal color and a wool gown. But it's got intricate embroidery that is a slight nod to Indian heritage.

We've also got Queen Charlotte's gown. It's a green and pink big ball gown — very much Marie Antoinette-like — that she wore for the first ball with a big wig, statement-making necklace and tiara.

What is featured from “The Marvelous Mrs. Maisel?” 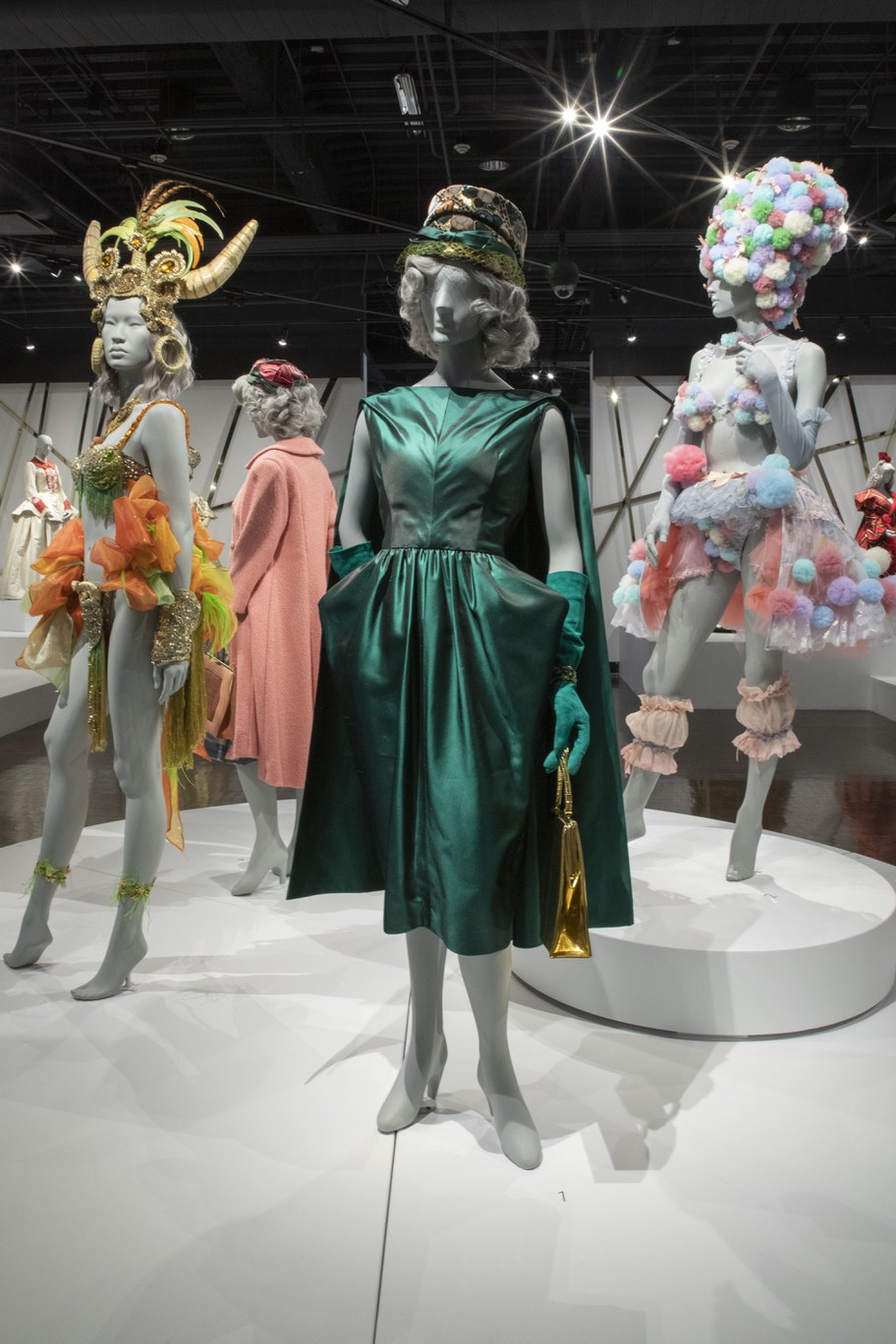 The flamboyant costumes worn by the burlesque dancers on the latest season of Amazon’s “The Marvelous Mrs. Maisel” are on display at the FIDM Museum’s Art of Costume Design exhibit. Photo by Benjamin Shmikler/ABImages, courtesy of the FIDM Museum.

Many people may not realize that the show transitions into the early 1960s. When we think of early 1960s fashion, it is still very 1950s. There's a rule in terms of when do you define a decade based on its fashion, and it's usually after the middle of the decade. So the shapes are still very 1950s.

You have that fitted silhouette, but the costume designer wanted to make sure to include a little bit of boxier shapes. Also what really started creeping into the early 1960s were larger hats, and we see one fabulously displayed in the exhibit that was worn by Midge’s mother.

We also have some very risque but fabulous costumes, and they're from the stripper episode. The costume designer had to design costumes for all the burlesque dancers, and so we have two of them. The pom-pom one is a showstopper.

How hard is it for designers to create something that just looks effortless like Grace’s costume on display from “Grace and Frankie?” 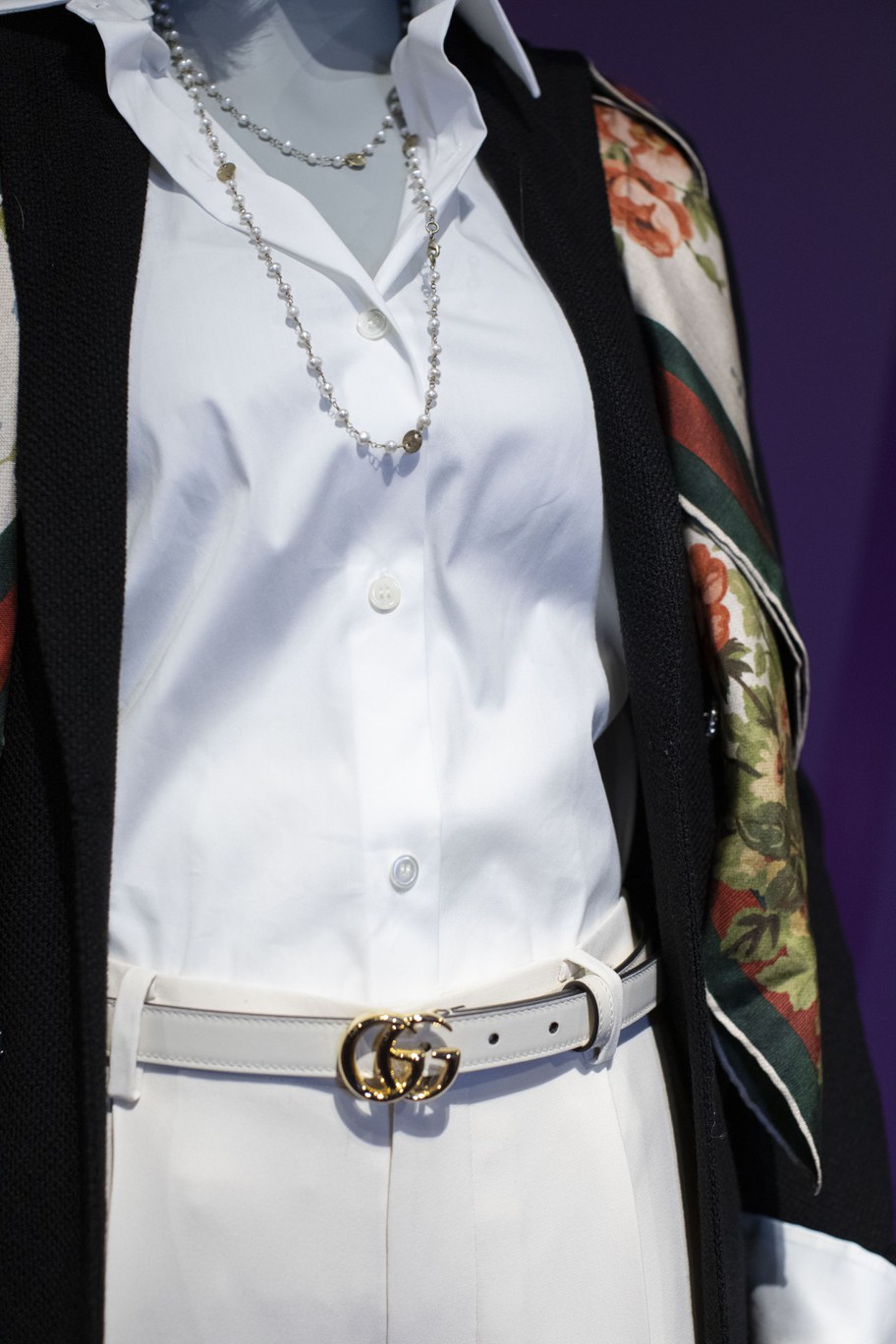 The timeless outfit worn by Jane Fonda’s character Grace in the Netflix series “Grace and Frankie” represents “the West Coast version of the Upper West Side,” says FIDM Chair of Fashion Design Nick Verreos. Photo by Benjamin Shmikler/ABImages, courtesy of the FIDM Museum.

We have Lily Tomlin as Frankie, the more bohemian, artsy character and then Jane Fonda as Grace. She is very elegant and she sort of represents tha Malibu-Bel Air style — the West Coast version of the Upper West Side.

What are the highlights from “Euphoria?” 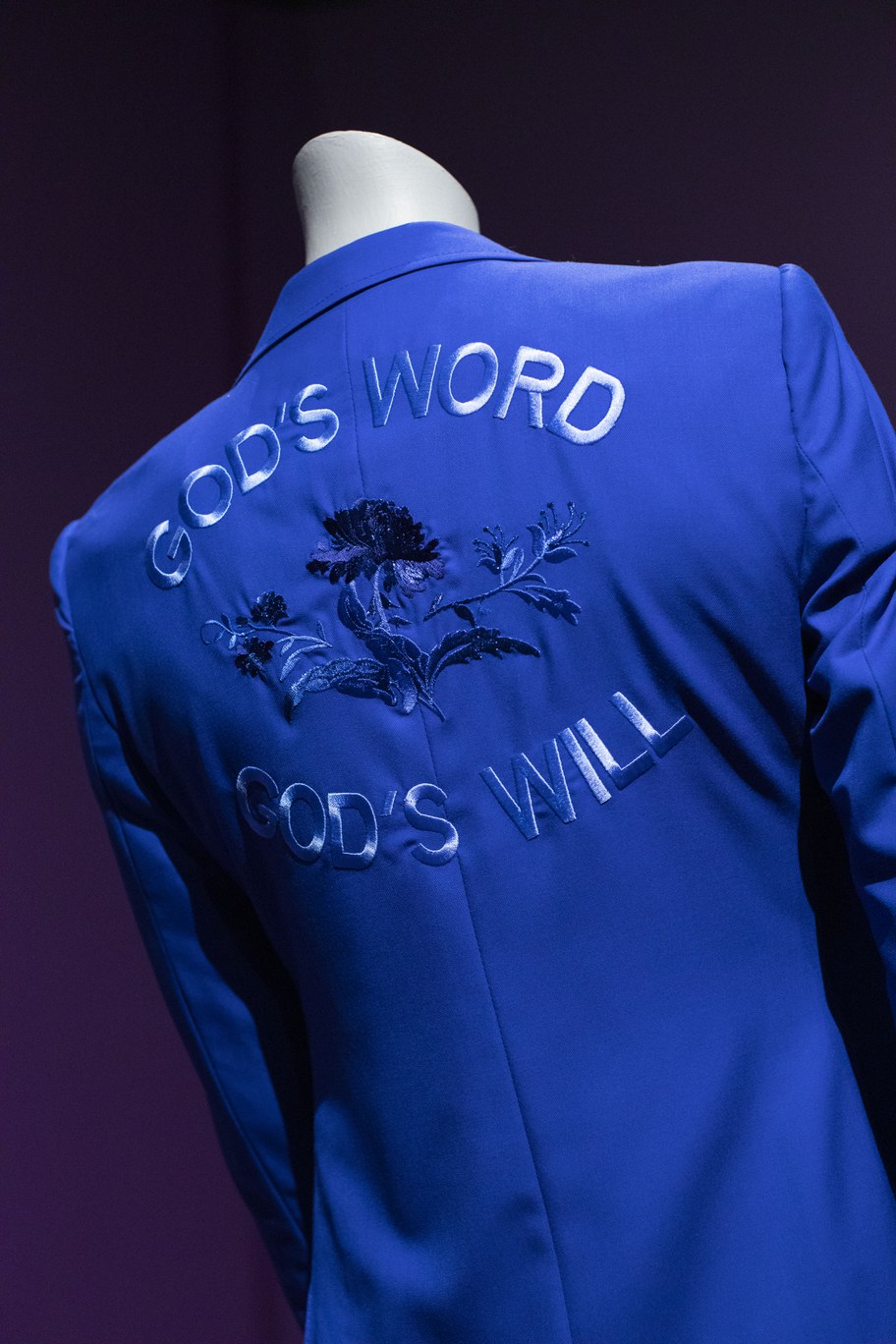 The bold blue power suit worn by the character Fez’s grandma in “Euphoria” was created by New York tailor Amber Doyle. Photo by Benjamin Shmikler/ABImages, courtesy of the FIDM Museum.

Heidi Bivens is the costume designer, and she actually comes from the fashion world. She likes to create character portraits through clothing, and you can see that in “Euphoria.”

You see on display something that Zendaya wears, and it's pretty casual … but along with it, she is wearing a vintage Gaultier vest that the costume designer found.

There’s also a fabulous blue suit worn by Fez’s drug-dealing grandma, and that was custom made by a New York tailor by the name of Amber Doyle.  It’s pretty great.

How do the dresses worn by Cassie and Maddy from “Euphoria” reflect their characters and relationship with each other? 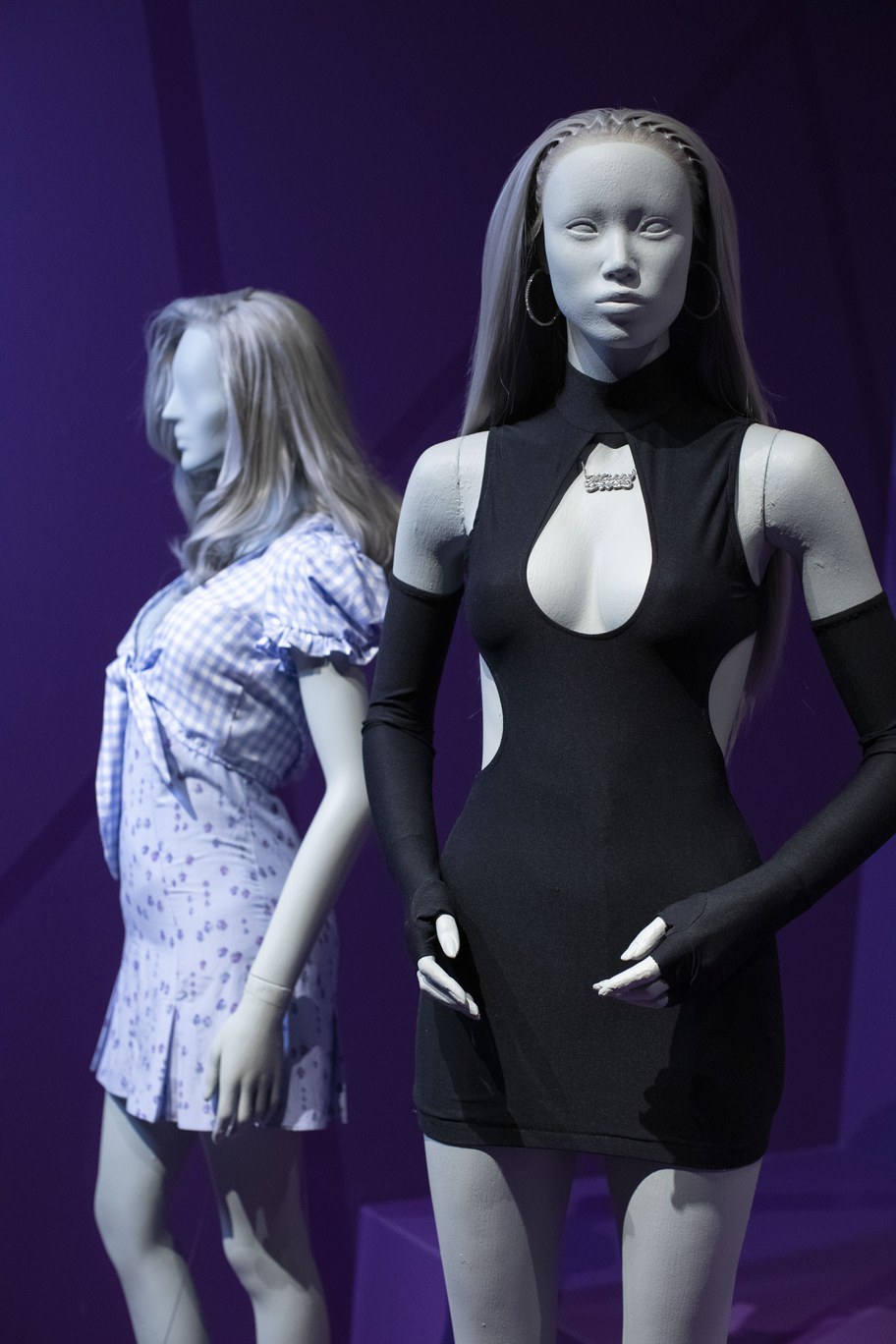 The costume designer from the hit HBO show “Euphoria” likes to create character portraits through clothing like these two dresses worn by characters Maddy and Cassie, says FIDM Chair of Fashion Design Nick Verreos. Photo by Benjamin Shmikler/ABImages, courtesy of the FIDM Museum.

The Cassie one — I call it the Daisy Duke outfit — is part of her transformation or “maddy-fication.” She's trying to look sexier, and so her fashion is trying to convey that to the audience and to her fellow classmates.

Then there is Maddy with her uber sexy black cutout dress. Everybody on the internet wanted that dress. It actually comes from a clothing line called AKNA. It's all about conveying who you want to be through fashion. That's something very important, especially for this younger generation. The characters and this age bracket [are all] about taking ownership of your body, being comfortable with it, and being comfortable with fashion.

What makes the costume featured from “Angelyne” unique? 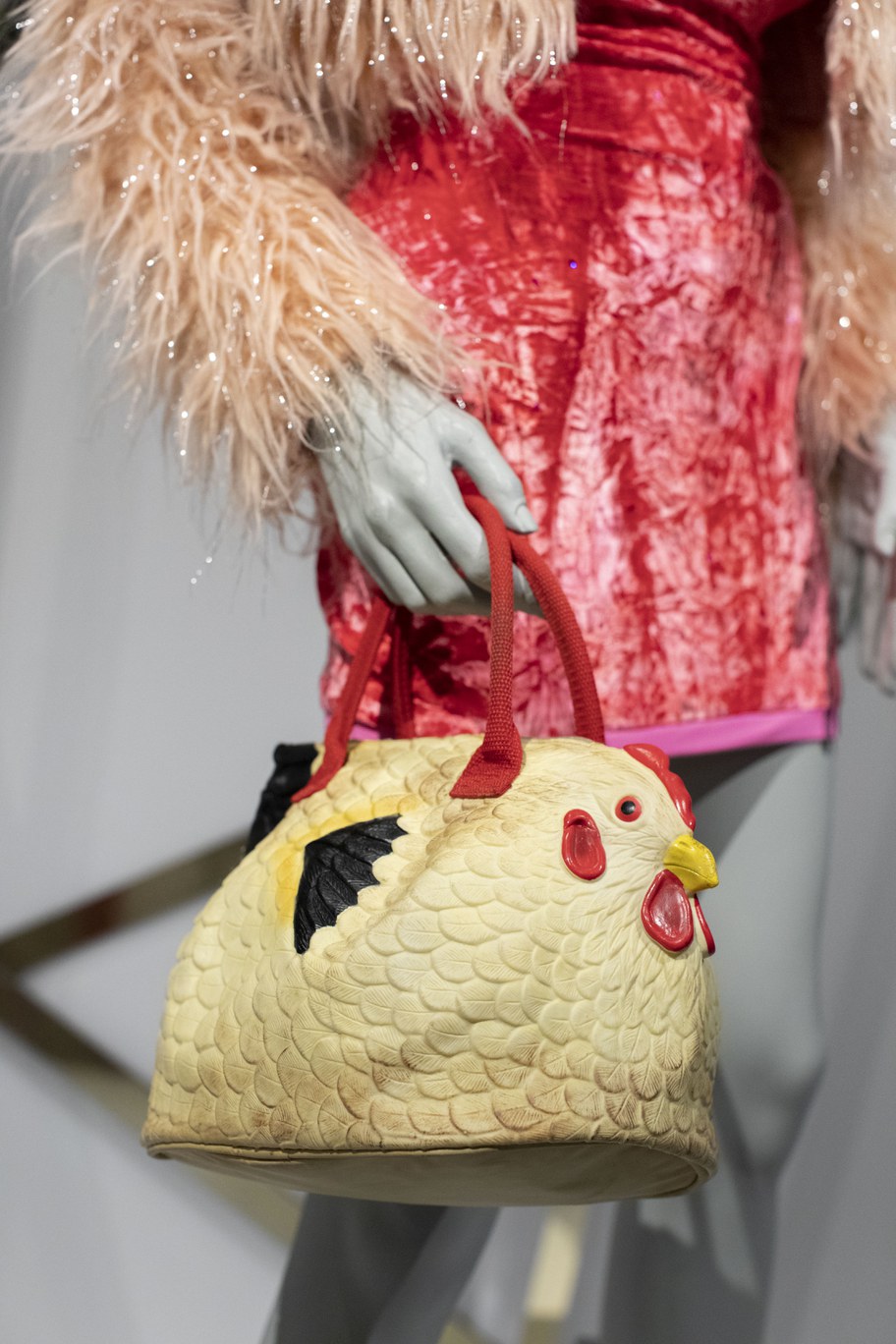 The Peacock series Angelyne features its namesake LA icon, who is known for her over-the-top pink outfits and the chicken-shaped purse she carries. Photo by Benjamin Shmikler/ABImages, courtesy of the FIDM Museum.

The costume designer had to custom-make almost every single costume for that series because it's such a difficult body shape, but it's all about pink. You think of pink, and you think of it as a childlike color, but she wanted to take ownership and make it sexy.

I also thought it was fascinating that the costume designer said the wardrobe team had to create different breastplates and different kinds of body prosthetics for her throughout the years of Angelyne. I thought it was a great look, and it just needs to be on a big billboard for sure.