Ady Barkan and his wife, Rachael King, in their home in Santa Barbara. Photo by Kathryn Barnes.

Ady Barkan was diagnosed with ALS three years ago.

At that point, he was a new father who recently moved to Santa Barbara with his wife, Rachael King. He was working as a political activist and enjoyed hiking and going to the beach.

Now the 35-year-old is almost entirely paralyzed from the neck down. He uses a computer to speak and needs around-the-clock care.

But the sicker he gets, the more personal his political activism becomes.

His experiences with insurance paperwork, doctors bills and prescription drug prices have led him to write a memoir about his experiences, “Eyes to the Wind,” and speak with some of the top Democratic presidential candidates about their healthcare plans.

Barkan: ALS is the story of things becoming impossible. Three years ago, I was totally healthy and could enjoy beautiful Santa Barbara, with hikes in the mountains and runs by the shoreline.

Now I can't eat or move almost at all, and require full time care to do basically anything. The worst, by far, has been not being able to speak for myself. Having to type things out one letter at a time means there are hundreds of things I want to say every day that I just can't get out there.

Still, I have tried to focus on what I can control and what I can change. And for me, I've been able to find meaning even in an incredibly difficult situation through activism and political change. 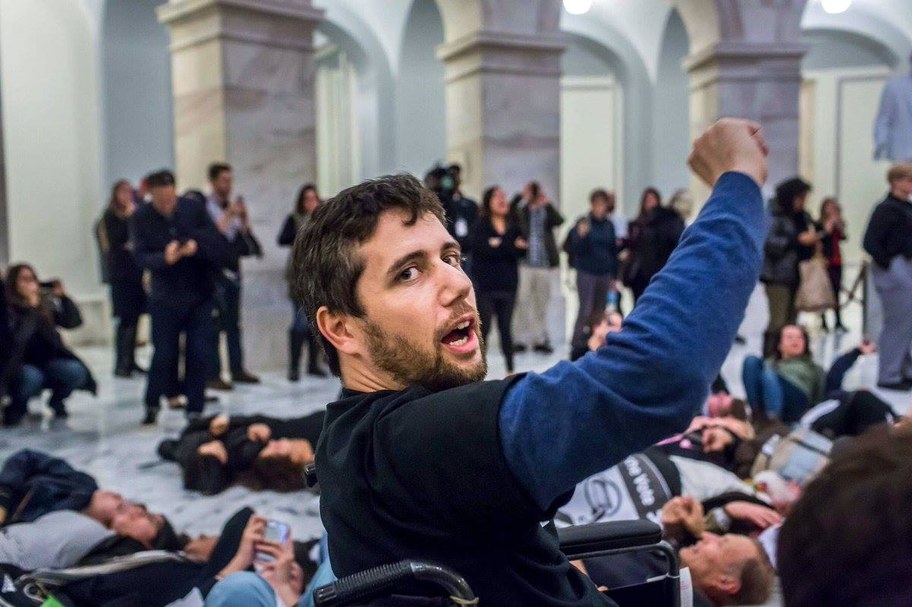 Despite your diagnosis, you've continued to tour the country and make numerous trips to DC to stand up for social causes, Medicare For All being just one of them. What are you trying to do with your remaining time?

I am trying to draw attention to how broken our healthcare system is, as someone who's lived it and experienced it firsthand. Since my diagnosis in 2016, my family and my assistants and lawyers have spent countless hours on the phone arguing with insurance companies to try to get them to cover the cost of basic treatment, like a ventilator I need to breathe.

Time and again, I've come up against the brutal reality of our healthcare system. The simple fact is that it is built for insurance companies and the rich, not for patients or the vast majority of Americans.

So I'm trying to use my remaining time to show people that there is a better way. We are the richest nation in the history of the world, and we already spend more per person on healthcare than any nation on Earth. It doesn't have to be this way. We can have Medicare For All and guarantee health care as a right to every person in America, all while still saving money from our outrageously expensive status quo.

What have been some of the hardest parts about navigating the healthcare system for you and your family?

The hardest part, by far, was the stress of figuring out how we would pay for the outrageous cost of full-time home care, which patients of ALS invariably need. I now pay $20,000 per month for the cost of full time care. I am fortunate to have wealthy supporters who are willing to help cover those costs, but that's not an option for most people. Most people just go bankrupt or die early instead when faced with bills like that.

You've interviewed six of the Democratic candidates for president and asked them about their health care plans. Who has the best plan and why?

Bernie Sanders and Elizabeth Warren are right that we need to fundamentally transform our healthcare system and take profit out of insurance. We need Medicare For All because it is the only plan that will save us money, ensure that every single person is covered, and fundamentally change the way we think about health care and human life in this country, not as commodities, but as precious and inherently valuable.

In most cases, ALS patients die within three to five years of their diagnosis. Stephen Hawking lived with the condition for 55 years before dying just last year. Does his story give you hope for your own?

Sort of. I've tried not to hope or think too much about the future and really stay focused on what's going on around me in the present. It's the only real way to not be devastated every day by the progression of this disease or become overwhelmed by grief. So day after day, I'm trying to think about how I can make a difference and still play a positive role in the life of my wife and kids. I'm trying not to set goals beyond that.

What advice would you give to others who are facing a potentially fatal disease?

Acceptance is everything. There is nothing you will be able to do to change the fact of your diagnosis. Once it's clear you have a fatal disease, you have to accept it, and you have to accept all of the feelings around that. The sadness. The helplessness. All of it. That's the way to find some semblance of peace, even as you're falling. And it's a lot better than continually feeling outraged about something you have no power to control.

On bad days, what keeps you hopeful and positive?

There's my son Carl and my wife Rachael. We have a baby girl due in a few weeks. It's such a joy to watch him grow up. It's hard not to feel good watching him play with trucks. I wish I could play with him, but that's the nature of this disease. Every good thing is a little bit tainted by the fact of ALS.

I've been really interested in the kind of world I want to leave behind for my kids. And I really believe we are at a turning point as a society, where we will either rise to tackle the great challenges of inequality and climate change or let them ravage our world.

And the thing that gives me hope is seeing so many people get engaged and become part of our political process to push our world in the right direction. That's the only way out of this dark moment we're in.

What do you love most about Santa Barbara?

Truly everything. So much good food. Mesa Verde and Los Agaves are two of my favorites. I love being so close to the ocean. I used to go all the time before I was sick. I love being so close to the mountains and real wilderness, where I used to go hiking all the time. This is an incredible community and I really love it here. But my communication system doesn't work in the sunshine, so I am stuck inside much more than I would like.