Lines at many LA County vote centers were short on Election Day.
Photo by Samanta Helou for KCRW.

Following an unprecedented election season, defined not only by its long primary season but a global pandemic, the day after the election has arrived. And despite concerns over civil unrest, malfunctioning voting machines, and long lines, Election Day across Southern California was calm.

As California election officials continue to tally votes, former Vice President Joe Biden cruised to a victory in California, winning more than 65% of the state’s vote.

Many races, including the battle for LA District Attorney and Congressional District 25 are still too close to call. According to LA County Election officials, there are many outstanding ballots still to be counted.

In total, more than 2.3 million voters in LA County in total cast their ballots by mail, making for a historic turnout and relatively short lines at vote centers.

KCRW reporters and photographers traveled across the region on Election Day and talked with Angelenos about why they voted at vote sites such as Dodger Stadium, The Pantages and The LA Zoo.

Helen Tang voted in person on November 3 at Beverly Hills in City Hall. She told KCRW reporter Caleigh Wells that she shied away from mail-in voting because she was unsure about the mail-in voting process.

“I trust myself, I want to put the ballot into the system directly by myself," she said. “I'm proud of myself to come in to vote [with] no line. I can do other things the same day."

On Friday, Gina Bisignano voted in Beverly Hills for President Trump. She says she voted for him because she blames Democrats for unnecessarily shutting down her skincare business during the pandemic.

Vahan Paroyan voted in Glendale with a friend. He told KCRW reporter Benjamin Gottlieb he voted for President  Trump due to tax reasons.“My dad is a middle class truck driver, so taxes are huge for us,” Paroyan said.

Some voters, like Luis Orellana and Suzette Avalos voted close to home at LACC. Avalos told photojournalist Samanta Helou-Hernandez that she voted in order to get President Trump out of office, who she sees as a symbol of disrespect to the Latino community.

“It’s important to vote because these past four years this man has done nothing but insult the Latino community, and I feel we need to vote him out,” says Avalos, who is Honduran and Mexican.

Felix Joaquin, owner of 12 Hour Barbershop, voted by mail this year. He’s voted in the last three elections. He says if people don’t use their voice in elections, they will be like “ghosts in the U.S.”

For others, like Brandon Curtis Williamson in Van Nuys, November 3’s election was the first time he voted. Williamson, who is a father, told Gottlieb that he voted because he said the election was too important to sit on the sidelines.

Angela Ochoa in Virgil Village also voted for the first time on November 3rd. After coming to the U.S. from El Salvador 10 years ago, this was her first year voting. She told Helou-Hernandez she likes voting because she gets to make her own decisions.

This year, some Angelenos were unable to vote. That includes Bianca, who is an undocumented immigrant from El Salvador. She wasn’t enthusiastic about either candidate, but she wants to see economic change and immigration reform. As a street vendor in MacArthur Park, her business was greatly impacted by the COVID-19 pandemic.

Check out our scenes from election day in LA below: 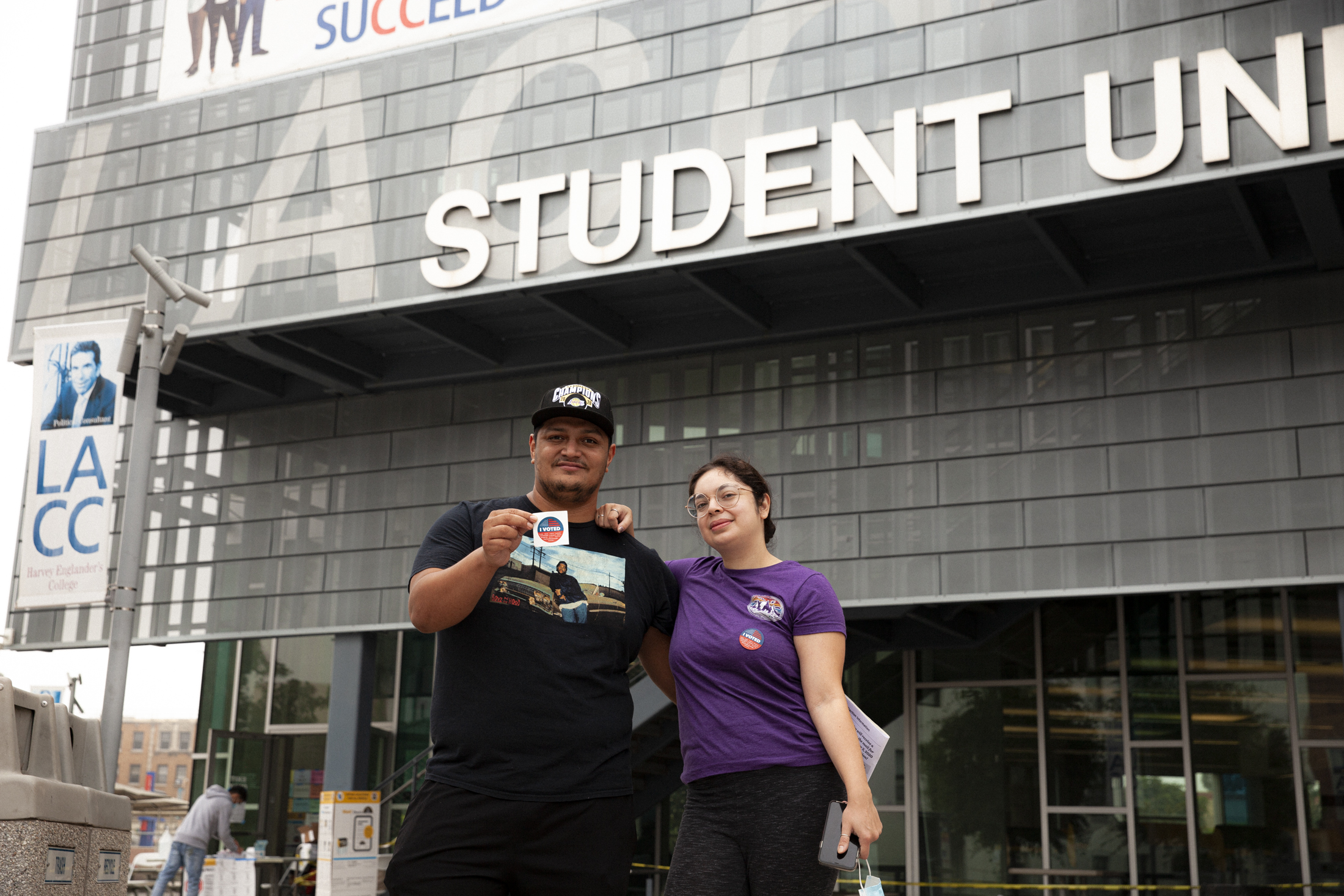 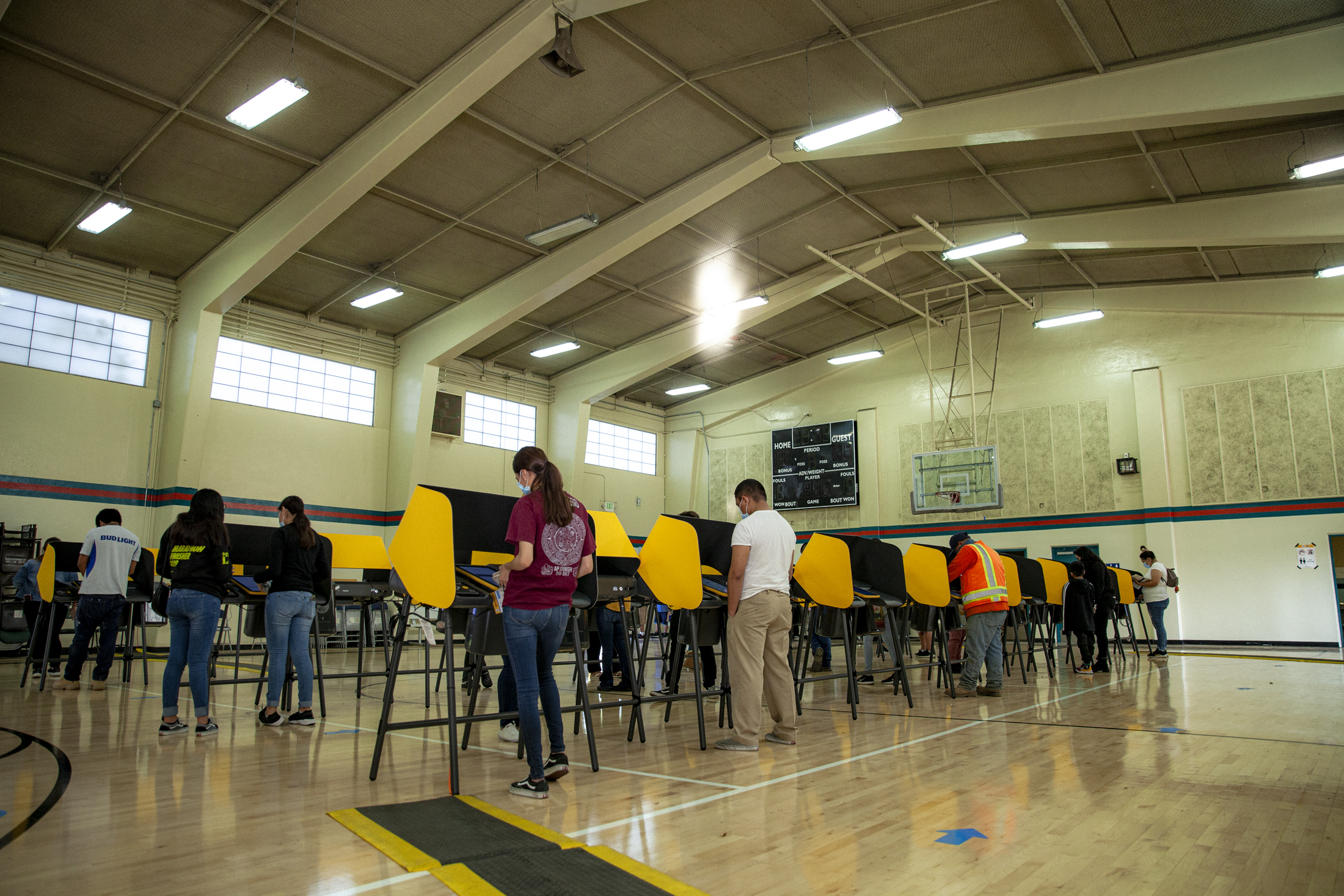 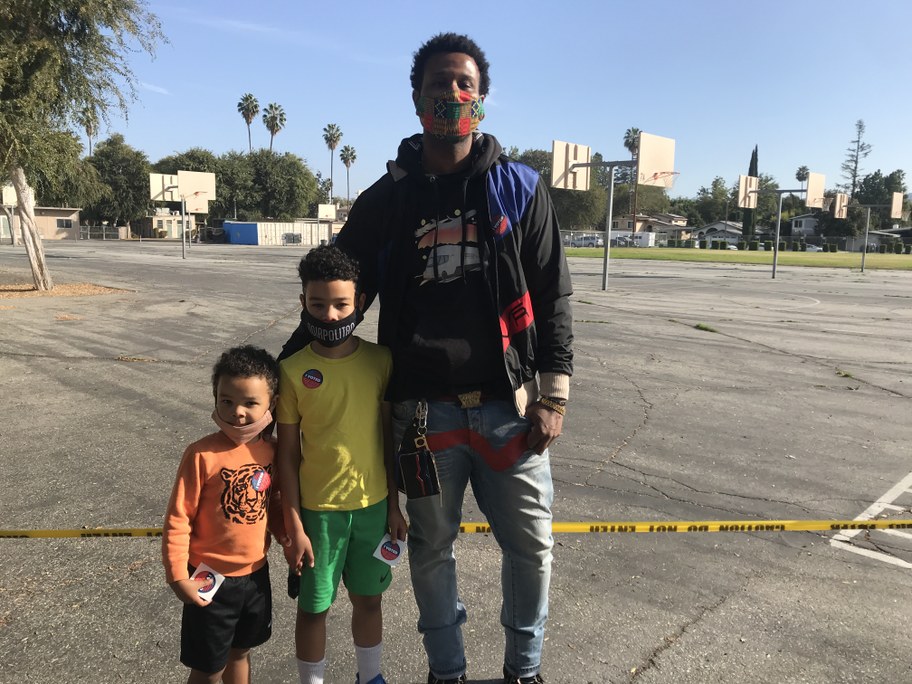 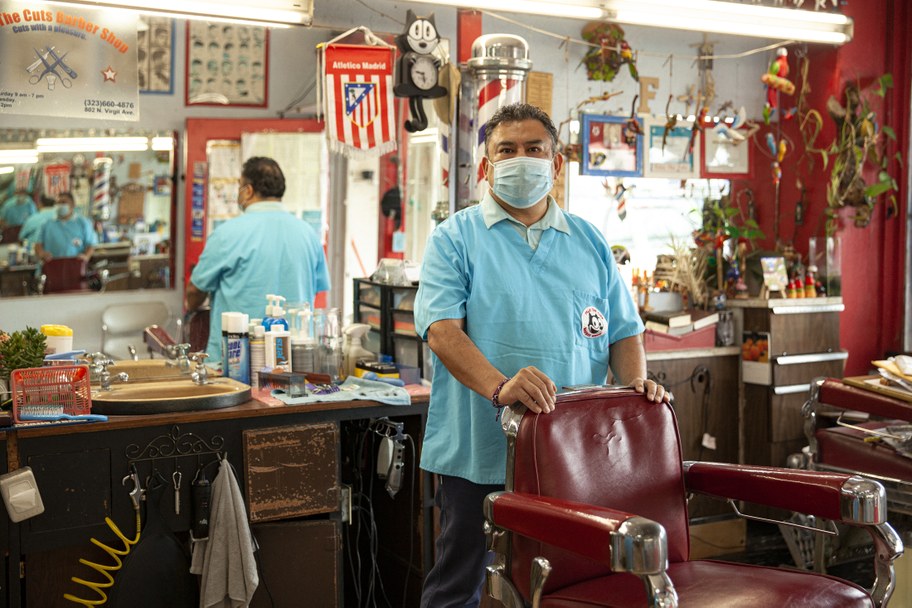 Felix Joaquin voted this year by mail. Photo by Samanta Helou for KCRW. 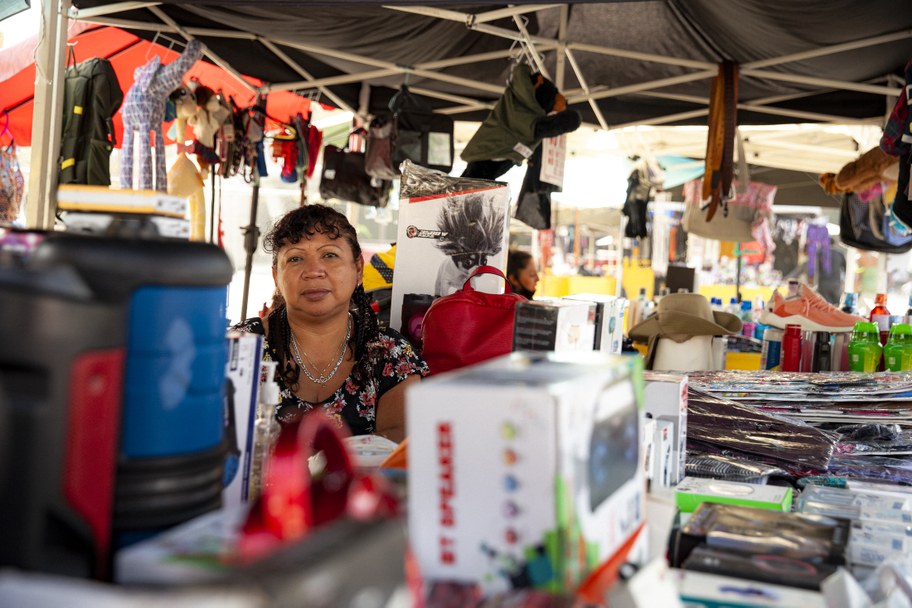 MacArthur Park street Vendor Blanca was unable to vote this year, due to her status as an undocumented immigrant. Photo by Samanta Helou for KCRW. 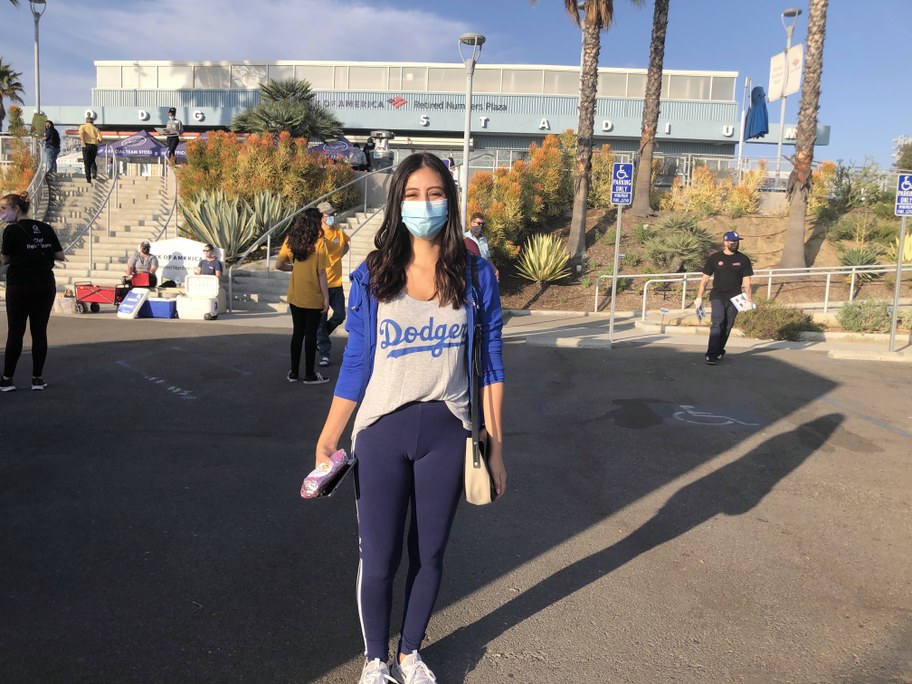 Yesenia Rodriguez of Silver Lake wore Dodger blue to come vote at the stadium. She says it felt more important than ever to research each issue on her ballot. She’s never felt like her vote mattered more than this year. Photo by Caleigh Wells/KCRW. 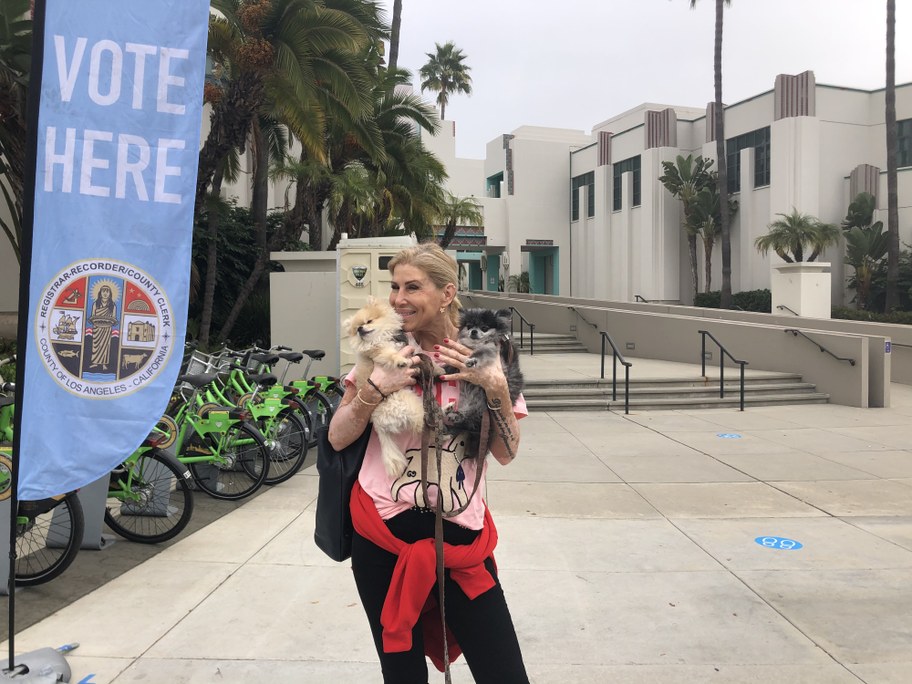 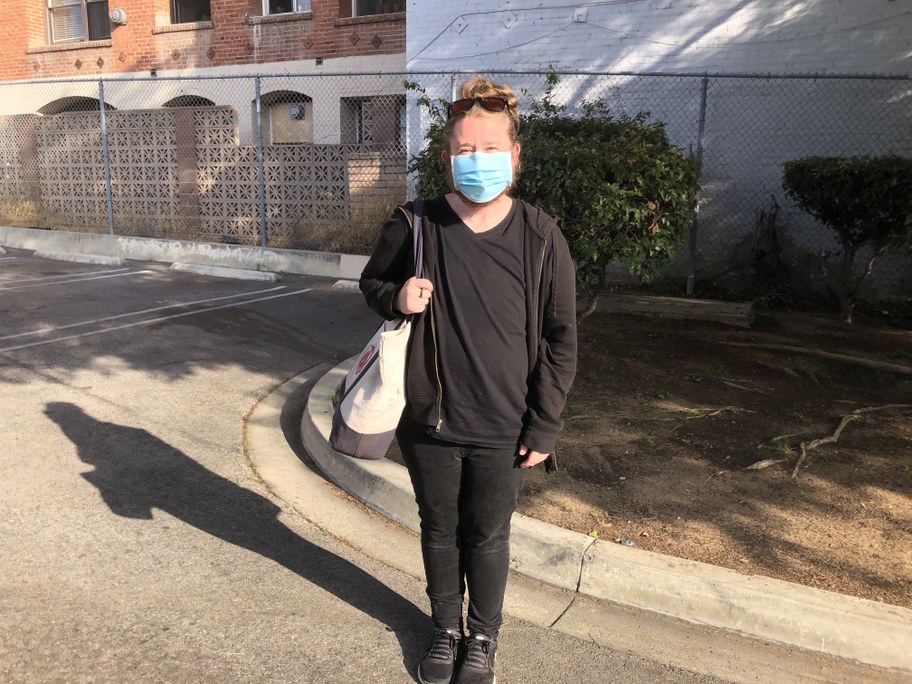 Tyler Bennett, who is currently unhoused, didn’t receive a mail-in ballot. So they voted in person. They’re especially worried about what the outcome of the presidential race means for their healthcare and social services. Photo by Caleigh Wells/KCRW. 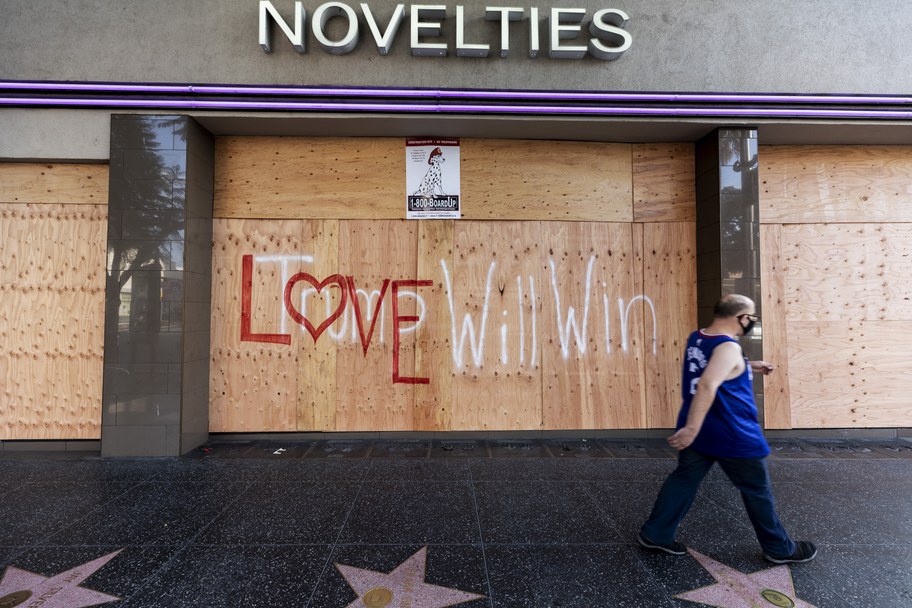 Due to presumed Election Day unrest, many business owners across Downtown LA, Hollywood, and Beverly Hills boarded up their doors and windows. Photo by: Ted Soqui for KCRW. 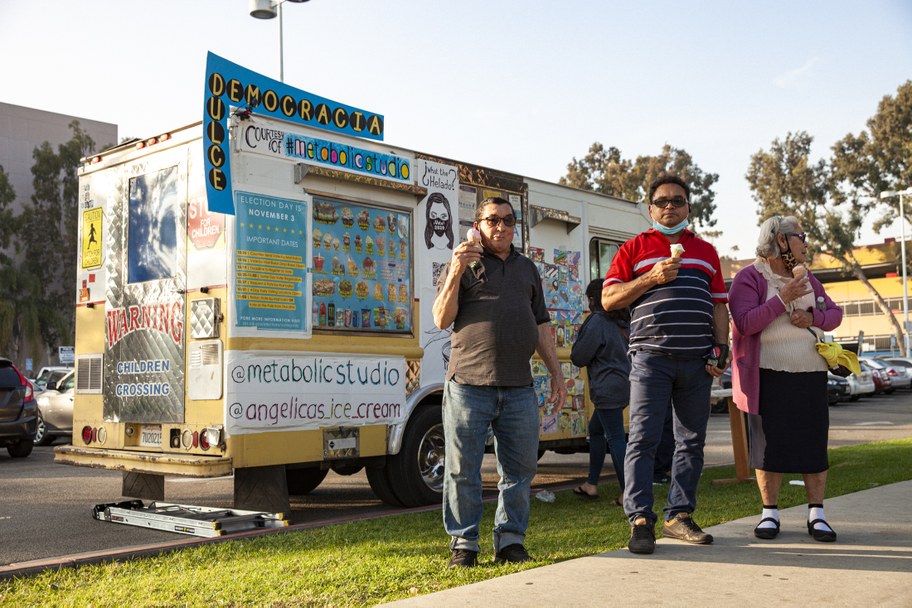 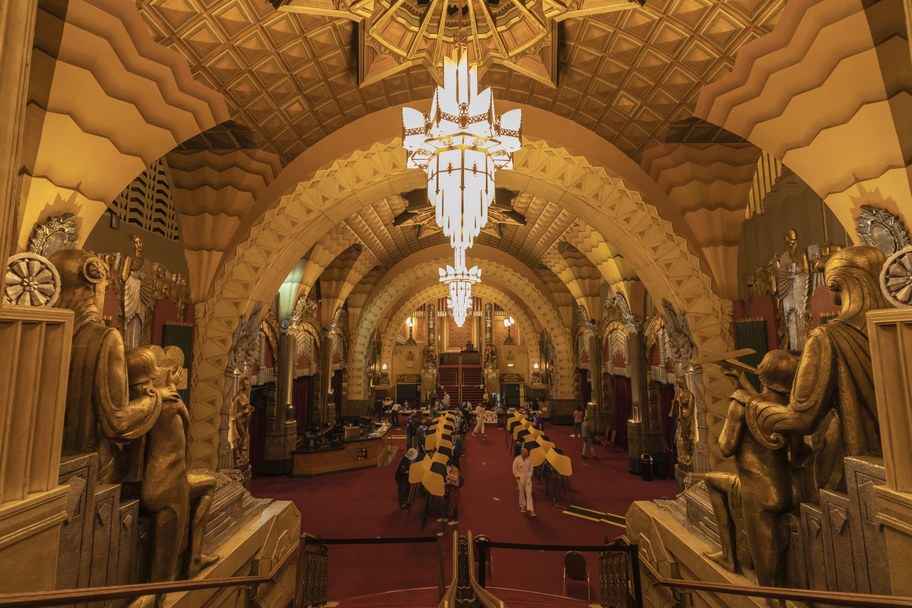 The Pantages Theater, in Hollywood, served one of more than 900 vote centers in LA County. Photo by Ted Soqui for KCRW. 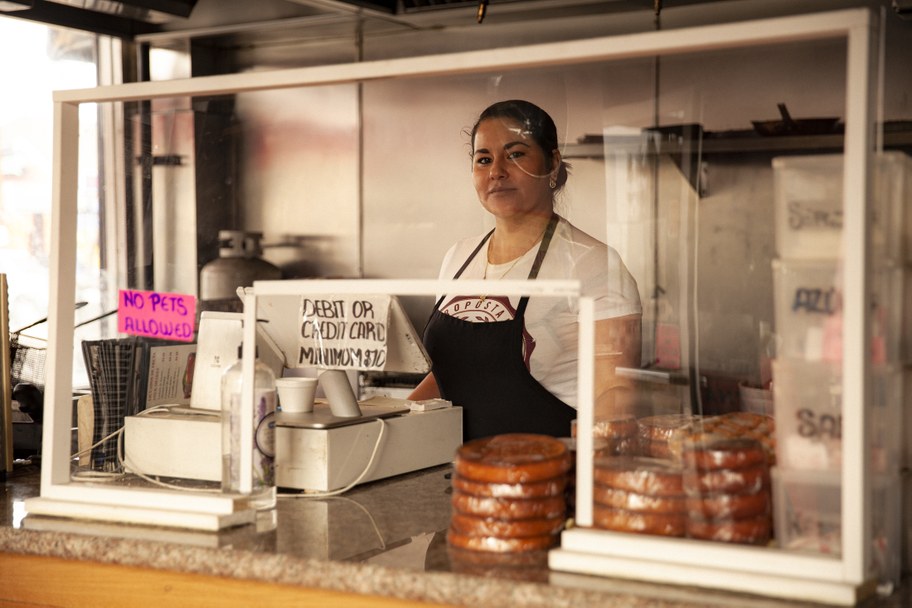 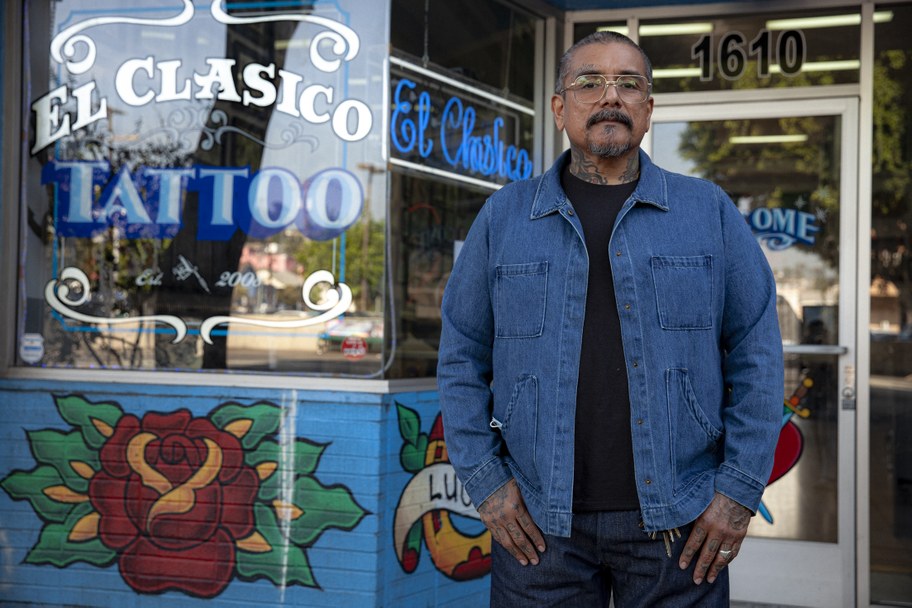 Sal Preciado is the owner of El Clasico Tattoo in Echo Park and a 5th generation Los Angeleno who grew up in East LA. He views voting in this system as “playing someone else’s game” and wants to see an Indigenous candidate. Preciado left the presidential choice blank. Photo by Samanta Helou for KCRW.