Beyond Stonewall: How LA Pride amplified the fight for LGBTQ rights A Gay pride parade in West Hollywood in 1977. Protests rocked Los Angeles in the years leading up to and after New York City’s Stonewall Uprising. Photo by Los Angeles Times Photographic Archive at UCLA Digital Library.

Fifty one years later, Martinez is now the executive director of the Latino Equality Alliance, a Boyle Heights-based organization dedicated to supporting the safety and wellness of LA’s Latinx LGBTQ community.

“I don’t know if it’s by cosmic law, or universal law, or how it happened,” Martinez says. “[There’s] this universal or cosmic energy to push me to be an advocate.”

Martinez organized the first annual Boyle Heights Pride on June 25, where local performers, community members and politicians took to the internet to virtually celebrate together.

Boyle Heights Pride arose as a response to the daily upending of life, from the COVID-19 pandemic and the civil unrest over the killing of George Floyd at the hands of Minneapolis police. The world-renown LA Pride began under similar circumstances of discord 50 years ago.

“Pride started from police brutality, police violence on LGBT folks,” Martinez says about New York’s 1969 Stonewall uprising. “The struggles of us being accepted in the world, and trying to fight for equality.”

For Martinez, the meaning of Pride is clear. “Pride is very intersectional,” hesays. “It represents the injustice [and] the discrimination that happens.”

Starting at Hollywood Boulevard and Highland Avenue, about 1,000 demonstrators took to the streets to march for LGBTQ rights in 1970. It was the reportedly first permitted LGBTQ protest in history.

Organized by Christopher Street West, LA Pride was a direct response to the six-day clash against police at the Stonewall Inn in New York City on June 28, 1969. The bar was infamous for its police raids and harassment of queer New Yorkers under the guise of cleaning “the neighorhood of sexual deviants.” 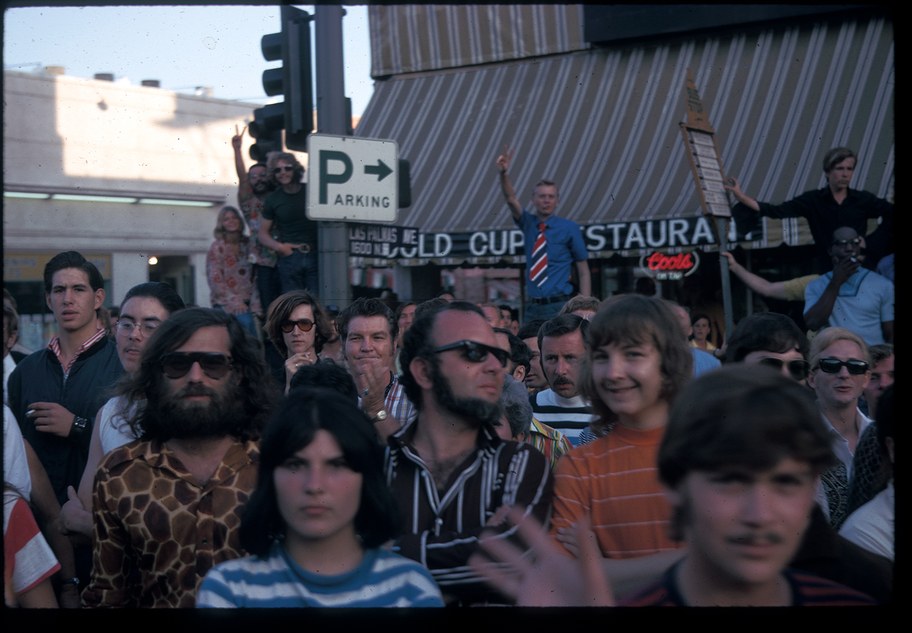 A crowd at LA's first parade on June 28, 1970. Photo courtesy of Christopher Street West Association Collection, ONE Archives at the USC Libraries.

Stonewall is often labeled as the powder-keg that set off the American LGBTQ civil rights movement. But as it turns out, New York doesn’t hold the exclusive rights to setting off the movement. According to Joseph Hawkins, the director of USC’s ONE National Gay and Lesbian Library and Archives, Los Angeles is rife with LGBTQ history.

In honor of LA Pride’s 50th anniversary, here are some poignant moments in Angeleno LGBTQ history.

Originally organized by the Los Angeles Merchants’ Association, All Fool’s Night was the culmination of La Fiesta, a week-long celebration during the tough economic times of the late 1800s. The event was loosely based off of Carnival, the traditionally European street parade. Similarly to Pride celebrations today, the event drew thousands of attendees, and visitors could find floats, masquerade balls, and street festivals. According to Hawkins it was a place for queer individuals to gather in drag and other gender non-conforming attire.

“People would dress up in drag and costume and run around town. It was a licentious sort of celebration,” Hawkins says.

But in 1898, after facing pressure from religious and conservative voices, the LA City Council passed ordinance 5022, which would effectively ban the dressing in drag and other non-traditional clothing. By the 1920s, the legislation would be used by law enforcement to fine and arrest those who cross-dressed. 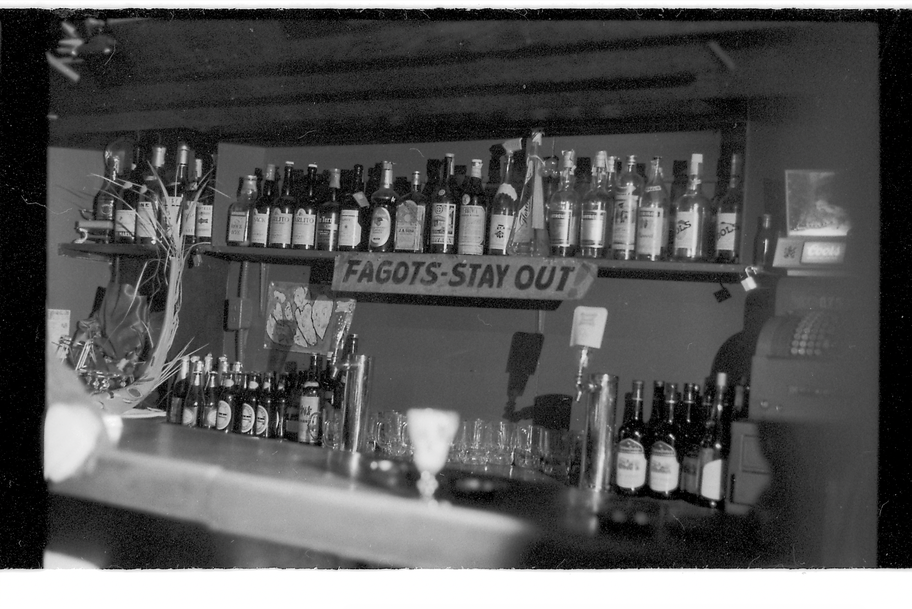 This sign was displayed at Barney’s Beanery in West Hollywood for almost half a century. Photo courtesy of ONE National Archive.

For nearly 40 years, a sign reading “Fagots Stay Out” was prominently displayed at Barney’s Beanery in West Hollywood. First installed in the early 1940s by then-owner John Barney Anthony, Hawkins says the sign became a lightning rod for pro-LGBTQ protests by the Gay Liberation Front, a grassroots activist group.

Well-known gay civil rights leaders, such as Morris Kight — the co-founder of Christopher Street West — and Reverend Perry staged demonstrations outside of the Beanery, demanding the removal of the sign. Protesters stood outside of the bar for three weeks in 1970.

The sign was permanently taken down in 1985, soon after the incorporation of West Hollywood.

The Cooper Do-Nut Riots is one of the earliest documented clashes between LGBTQ people and police in the years leading up to Stonewall.

The 24-hour donut shop was said to be frequented by both police officers, Black and Latino drag queens, and queer Angelenos at night, which led often to clashes between both groups.

As the 1960s approached, Hawkins said queer people began to tire of the police harassment. “They said to hell with this, we’re not putting up with this anymore. We’re going to go after these people,” he says.

One night in March of 1959, LAPD officers tried to arrest customers at the shop, including author John Rechy, drag queens, and a handful of sex workers. Patrons fought off the police inside of Cooper’s by throwing paper cups, trash, and, yes, doughnuts at police.

Minutes before midnight on December 31, 1966, Angelenos were gathered inside the Black Cat on Sunset Boulevard in Silver Lake. It was New Years Eve, and attendees were getting ready to usher in 1967. Two years before the Stonewall Uprising.

Unbeknownst to the partiers inside, plainclothes police officers had infiltrated the event. At the strike of midnight, after the men and women inside hugged and kissed each other in celebration, the party was raided and at least 14 people were arrested by police. Two gay men were found guilty of kissing one another by a trial jury and were registed as sex offenders. 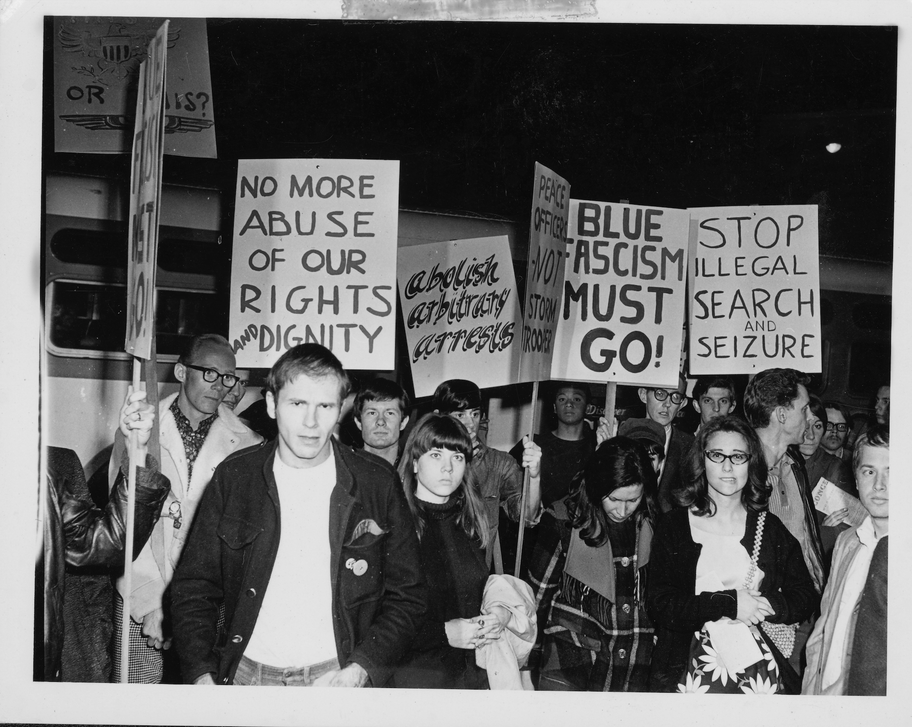 The Black Cat demonstration on February 11, 1967. Photo courtesy of Advocate Records, ONE Archives at the USC Libraries.

Later, in February, the Gay Liberation Front staged a 24 hour demonstration, where men kissed one another. Police were invited to watch, according to Hawkins. Some 500 demonstrators showed up.

“It was an in-your-face, ‘we’re here, we’re queer, get used to it because we’re not going away now’,” Hawkins says.

In March 1969, Howard Elfand was brutally beaten by two members of LAPD Vice Squad after an “anti-gay” raid at the Dover Hotel in downtown LA. He died within half an hour of arriving at the LA General Hospital. In response, more than 100 protesters took to the streets, led by Kight and Reverend Perry.

In a trial by jury, the officers defended their actions, stating Elfand had propositied them at the Dover, the location of a known sex club. The jury delivered a verdict of “justifiable homicide” in 30 minutes.

For Martinez, the years of multifaceted queer history have built a legacy.

“Social change doesn’t happen overnight. It’s a process. But in that process everyone has a certain role,” he says. ”Don’t think you need to have a cape on, and go flying around and doing everything yourself. Just know what you do at that moment has a significant impact on making a better place. ..then turn around and look back and see the change you’ve made in the world.”

Looking forward, Martinez hopes that next year Boyle Heights Pride will be held in-person, like the LGBTQ celebrations that came before it.