LAUSD faces a deadline to prove it can pay its bills Ending the six day teachers strike brought labor peace to L.A. Unified, but it made the school district’s financial situation worse, forcing it to tip into financial reserves that will be nearly depleted in three years. Photo credit: Saul Gonzalez.

When the L.A. teachers strike ended in January, Los Angeles Unified teachers received a six percent salary hike and a pledge by the district to hire more school staff and cut class sizes, all at a cost of $400 million over the next three years.

However, the commitments in the deal made the district’s already serious financial troubles even worse.

Factors such as ballooning pension costs, health coverage for employees, and a declining student population mean that LAUSD is spending about half-a-billion dollars more a year than it takes in, which is forcing America’s second largest school district to burn through its budget reserves.

“We will spend every nickel we have in the next two and half years and it will all be gone,” said LAUSD Superintendent Austin Beutner on the eve of the strike.  Beutner hasn’t changed his prediction.

To avoid bankruptcy, the district wants more education funding from Sacramento. It also wants to put a parcel tax on the local ballot, so that money raised from property owners would be allocated to schools.

But LAUSD faces a more immediate day of financial reckoning.

Under California law, all school districts in the state must submit proof to their respective county offices of education showing that their finances are stable and that there are no risks of insolvency. The deadline for LA Unified to submit a financial stabilization plan to the L.A. County Office of Education for review is March 18th.

The plan has to show that the district can eliminate deficit spending and keep from going broke. And it’s not allowed to factor in dollars that aren’t guaranteed, like possible money from Sacramento or revenue raised from a parcel tax ballot measure that may or may not pass.

“I believe there is a will on the part of the district and support from the county to figure out a way to make it happen,” said Jim Morris with the Los Angeles County Office of Education. Morris, a former chief operating officer with L.A. Unified, was tapped by the county to lead a team of fiscal experts charged with helping the district submit a fiscal plan. 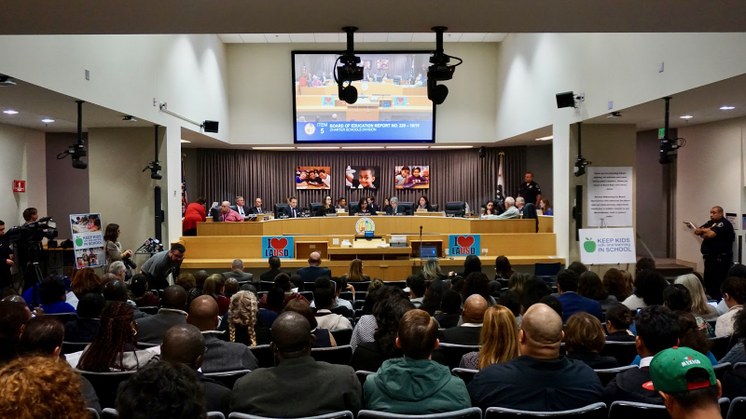 LAUSD must submit a financial stabilization plan to the Los Angeles County Office of Education by March 18th, showing that it can keep sufficient money in its financial reserves and avoid insolvency. Photo credit: Saul Gonzalez.

If  L.A. County says the plan isn’t up to snuff, it can take an extraordinary step and appoint a financial advisor with the power to overrule the LAUSD’s budget decisions and block future labor agreements the district might negotiate. That would shift fundamentally shift control of how the district spends its money to Los Angeles County.

In 2017 Los Angeles County did this on a smaller scale after a state audit found that the Montebello Unified School District’s finances were in shambles. The county imposed a fiscal advisor on the district, who still makes fundamental decisions for how money is spent.

At least for now, Morris is reluctant to talk about that as a possibility for LAUSD, hoping that with the assistance of the county, the district will submit a plan that passes muster.

“This is the district's job to either identify the cuts or the revenue enhancements,” said Morris. “The sooner you start planning for the long-term fiscal stability of the district, the easier it is.”

Of course, if the task were easy, LAUSD wouldn’t be in the trouble its in now.

In a statement emailed to KCRW, LAUSD said it continues to work on its plan. The district won’t give any more details, other than to say it’s seeking a more than $42 million reduction in annual operating costs.

If the district and L.A. County can’t find a lasting solution to the district’s financial woes, there is another possibility. The State of California could ultimately step in, fire top school district management and seize control of LAUSD. The state took control of Compton’s public schools in 1993 and Inglewood’s in 2012.