Long Beach looks to revitalization, but some get left behind Long Beach, the city once dubbed as “Iowa by the Sea,” is transforming into a mini metropolis by the sea through a revitalization effort that includes new high-rises that will be home to some 5,000 new housing units, with a goal of 8,000 total by 2023.

If you walk through the city’s downtown core, you can’t escape the sound of construction.  Crews hammer, install beams and add high-end finishes to new buildings in areas that used to be filled with vacant lots.

There will be a new city hall, new waterfront hotels and the soon-to-be tallest building in Long Beach: a 35-story residential tower. But that only gets to keep the record until another planned 40-story tower is completed on the west side of downtown.

It’s a big change for the city that’s long been in the shadow of glitzy Los Angeles, connected to the north by a ribbon of asphalt and concrete known as the 710 Freeway. 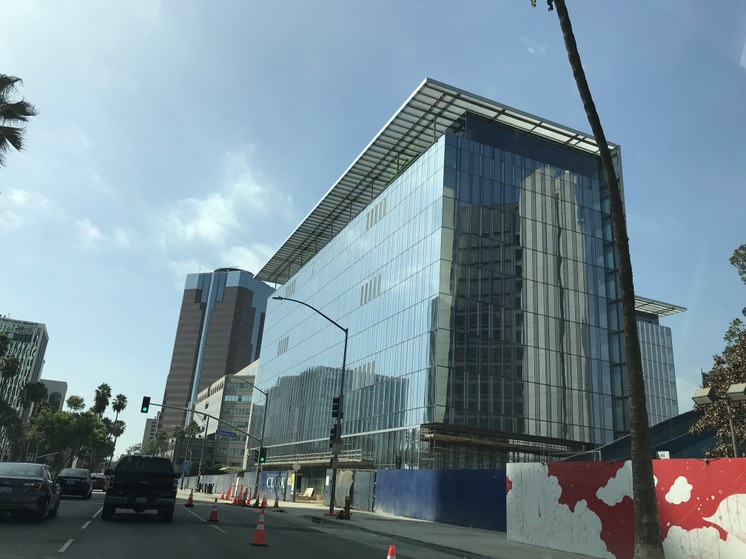 New buildings have also been going up in the Long Beach Civic Center, where there will be a new city hall, new Port of Long Beach headquarters and new main library. Photo credit: Susan Valot

“Long Beach is the same size as Atlanta, Georgia. The population of Long Beach is bigger than Miami, than Pittsburgh, than St. Louis, than New Orleans. Those are all big cities. Long Beach is a big city completely on its own,” said Long Beach Mayor Robert Garcia. “I think because we’re so close to L.A. and the second largest city in the country, you know, I think a lot of folks don’t realize what’s happening here.”

Garcia has been working on redeveloping downtown Long Beach since he was first elected mayor in 2014. Last year, he focused his re-election campaign on economic development, housing and public safety. He easily beat his opponent, capturing nearly 80 percent of the vote.

"A lot of people today are scared of more people, but the future is that cities that aren't growing and adapting and creating space for young professionals to live and work are dying,” Garcia said. “And cities of the future are growing. They're planning for growth."

Garcia looks forward to the Long Beach skyline becoming more cosmopolitan, just in time for the 2028 Summer Olympics, which will be hosted by Los Angeles. Like in past L.A. Olympics, Long Beach hopes to host several events, though it is not clear yet which events it will host. Being part of the Olympics means people. And people would fill up the city’s new hotels. 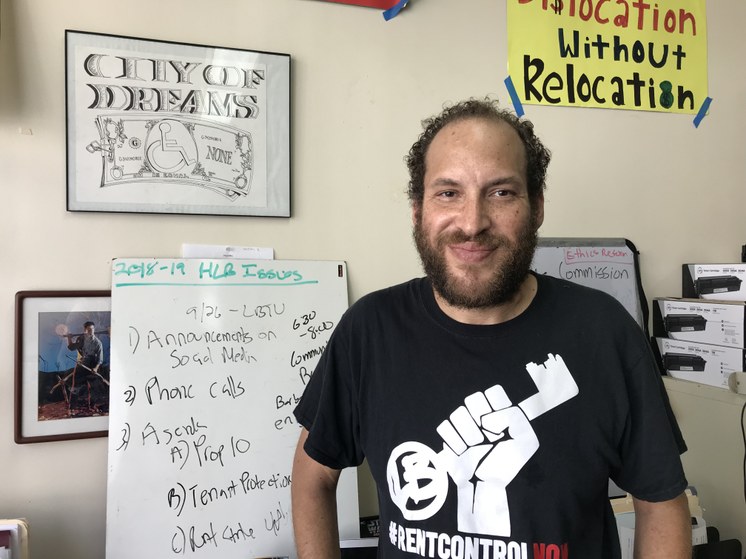 However, not everyone is thrilled with the revitalization. Josh Butler, executive director of the affordable housing non-profit Housing Long Beach, walked around downtown Long Beach and its eastern edge on a recent sunny day. He pointed out the ripple effect of high-end development downtown on the nearby area, which is somewhat run down and full of older places with cheap rents. 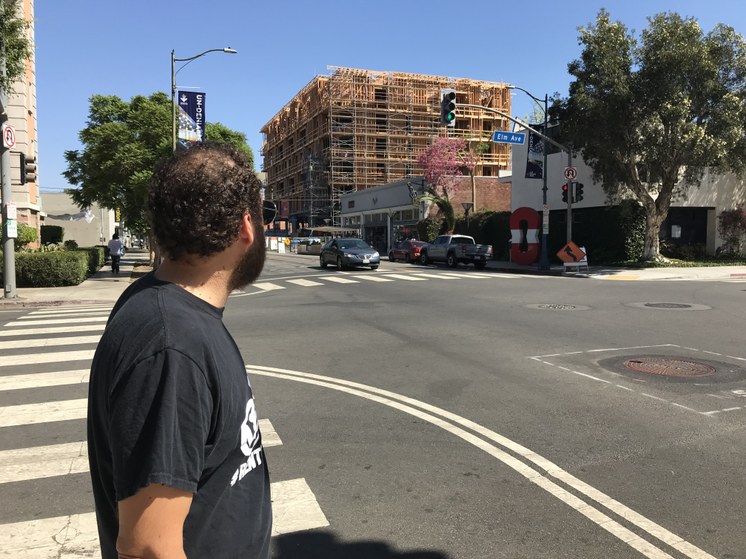 While some sections still had older buildings with bars on the windows and peeling paint, hints of change were evident. Closer to the downtown core, new coats of paint were visible. The bars over the windows were gone. Neat, new fences surrounded tiny, tidy yards. Younger people walked dogs along the sidewalk outside.

Along one stretch, every single building had “for lease” signs out front. Many apartment buildings appeared to be empty. Butler stopped at one. The doors and windows were wide open. You could smell the paint fumes.

“This is a building that has new paint, new doors, new everything. New rents - and all new residents,” Butler said.

Still, there were signs of big city problems, too. Closer to the downtown area, where the glassy skyscrapers are going up, homeless people laid on the sidewalks. One man yelled about murder and AIDS while lying on the ground, covered by a blanket in front of a high-end development still being built. 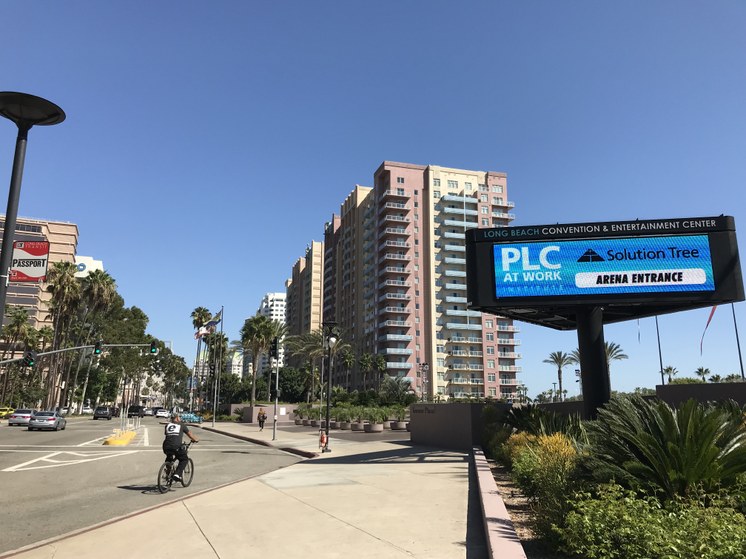 There are already many recent developments completed along Ocean Avenue, near the waterfront in downtown Long Beach. Photo credit: Susan Valot

Nearby penthouse units at the 17-story high-rise known as The Current, cost about $6,000 a month.

Butler pointed out where vacant lots used to be, now replaced by luxury developments.

Butler said they started seeing residents being evicted two or three years ago. He said other residents are facing rent hikes they cannot afford. He said in some cases, the rent increases are 40 to 50 percent, resulting in a $400 to $500 rent hike.

“That’s tantamount to an eviction,” he said.

Mayor Garcia pointed out that the new development is not building over affordable housing units and that the new development includes 800 affordable housing units, which amounts to about 16 to 17 percent of the total new units. Garcia said these will be rent-stabilized units for seniors and veterans and families and are in addition to the roughly 6,000 rent-stabilized units in the city, many for seniors.

“Displacement and gentrification are complex issues for cities. And I don’t know that anyone has figured it out yet on how to do it right. When you have a neighborhood that has been high crime and then over time becomes safer,” Garcia said, “How do you find that balance? I think that’s what we’re struggling with.”

Butler does not think the additional affordable units are enough to counteract the rising rents that have forced some long-time residents out.

Butler compared the gentrification to the infamous episode of “The Twilight Zone,” “To Serve Man.” In it, a towering alien comes to Earth, promising to fix all of its problems. The alien leaves behind a book with a mysterious title.  People begin to trust the aliens and board a ship to go to their paradise land. And at the end, a cryptographer decodes the title and learns it is “To Serve Man” and it is a cookbook.

“With gentrification, people are very excited about some of the changes that we initially see in a depressed community,” Butler said. “But at the end of the day, it turns out to be a cookbook for us because we can’t afford the rents, we can’t afford to live in the community, we don’t recognize our neighbors anymore.”
Mark Magdeleno recently moved into a renovated apartment building on the edge of downtown Long Beach. 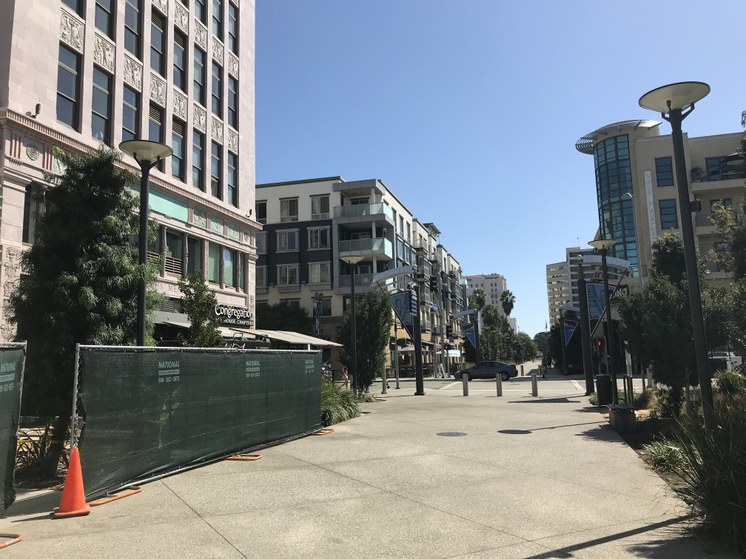 The new downtown Long Beach core is still under construction, but already businesses like restaurants and breweries have moved in. Photo credit: Susan Valot

“I think they kicked everybody out of here. I moved in and everybody is brand new. And I felt like the first day of college,” Magdeleno said, admitting that he felt little bit guilty. “I know that somebody lived there before me and I felt bad because being someone that would advocate for people's rights, when you move in, you kind of take, not advantage of it, but you're benefiting from someone not being there."

Magdeleno and others worry that gentrification will mean a loss of diversity and a loss of community in Long Beach.

Karen Reside grew up spending time at her grandmother's house near the water in Long Beach in the 1950s, when the area was dubbed "Iowa by the Sea" for its small town feel and transplanted Midwesterners. They would hang out at the entertainment zone called the Pike on the waterfront, which was around where the Long Beach Convention Center is now.

"And it was just a very interesting mix,” Reside said. “The whole downtown area was really fascinating because there was so much stuff going on all the time."

But then the Pike started to decay. Adult movie theaters moved in. Crime increased. Then in the 1970s, the first push for revitalization came with a few restaurants and an influx of subsidized senior housing.

Reside said criminal activity got pushed a little bit further away from the downtown core.

"There was like a four block area you could walk down and be okay, but you couldn't go around the block,” she said.

Last year, Long Beach saw a 16.5 percent drop in its overall crime rate compared to the previous year. Crime data from the city showed an increase in murder and rape, but a big drop in robbery and aggravated assault.

As the city changes, it is attracting new attention, like that of the Los Angeles Angels of Anaheim. They are considering building a stadium here where there is currently a parking lot on the waterfront by the Long Beach Arena and Convention Center.

Business leaders hope it will be like what you find in San Diego or San Francisco. It’s a transformation, good and bad, that could help Long Beach break free of the shadow of L.A. and hold its own as a city on the sea.