The first patients at Long Beach Convention Center line up to receive their coronavirus vaccine. Photo by Caleigh Wells

Then the website crashed from the flood of people trying to make appointments.

But in Long Beach, it’s a different story. The city is already vaccinating residents ages 65 and older. Grocery store workers are making appointments, and educators start getting vaccinated next week.

Why are the two areas in such stark contrast?

Long Beach is one of two cities in LA County that has its own health department, which means they get their own supply of shots and make their own decisions about who gets vaccinated and when. While LA County is spreading out its vaccinations in a step-by-step plan, Long Beach Mayor Robert Garcia says the city is opening the floodgates.

“A lot of health departments and folks I’m talking to are planning out their weeks, and spreading it out to 1000 this week, 1000 the next week. We’re just trying to do as many as we can every single day until we run out,” he says. “So I think that’s the key difference. And it is a little riskier because we could run out, but that’s a good problem to have.”

The city opened its largest vaccination site on Tuesday at the Long Beach Convention Center, where 1,800 people were vaccinated on the first day. Patients there reported getting in and out in half an hour, including the 15-minute mandatory recovery period.

“It was easy. We sat for a while, chit-chatted with the people over there and came right in, no big deal,” says Long Beach resident David McGilton-McGlamery.

He called his last year with his husband Rick “retirement on steroids,” and says he can’t wait for it to be over. “I want it all to end so I can go on a vacation somewhere. Anywhere. And eat at a restaurant inside.” 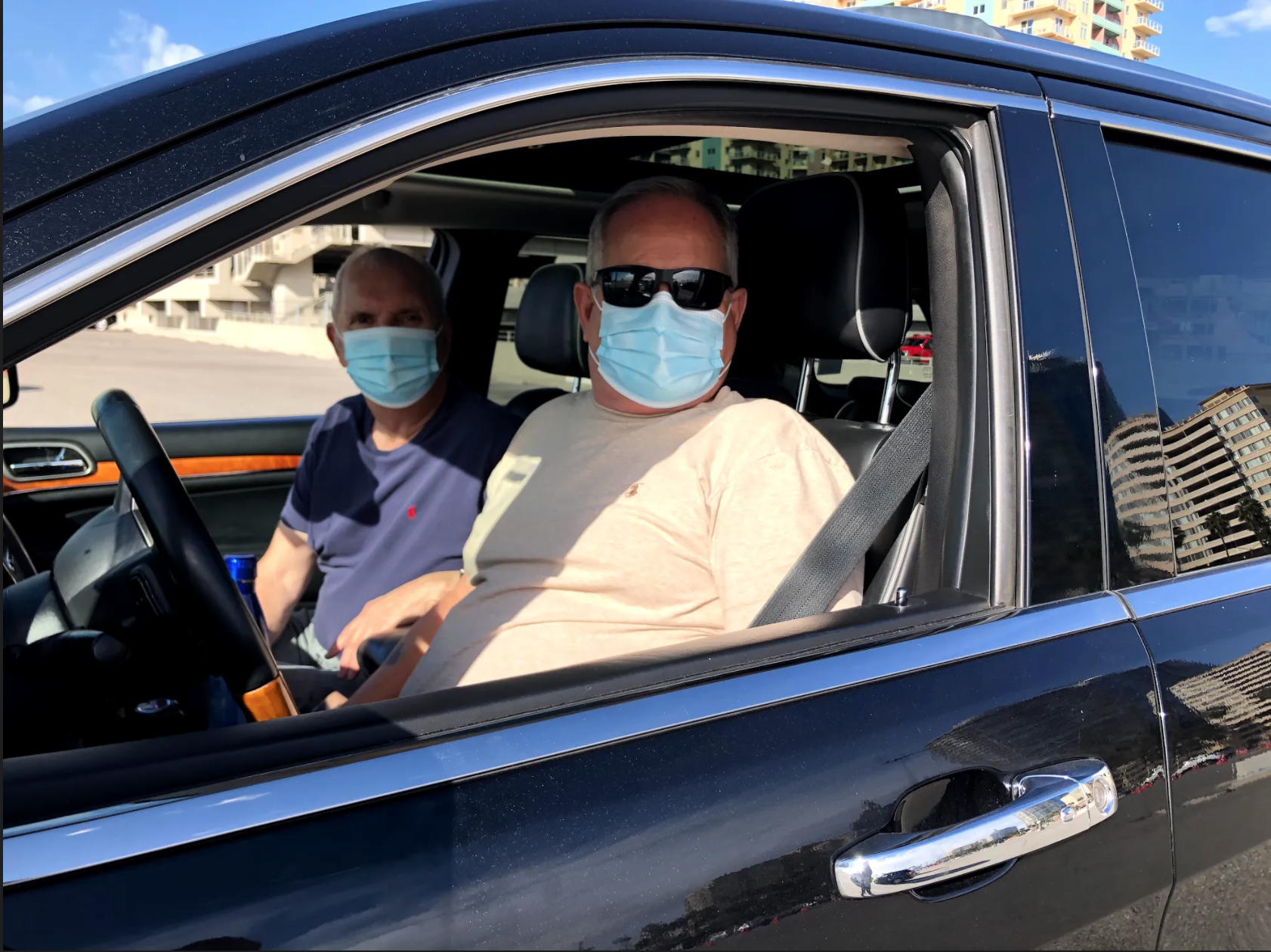 David (right) and Rick (left) McGilton-McGlamery are eligible for vaccinations as residents 65 or older. They arrived an hour early for their vaccines. Photo by Caleigh Wells

“I'm really impressed with how this has gone. It’s a lot of people. It seems to be really under control, and I’m just thankful to be on the road to being fully vaccinated.”

Los Angeles County just started vaccinating all residents 65 and older. How do I sign up?

LA County residents can sign up at the county’s vaccination website, which is now up and running after it crashed from so many people trying to register on Tuesday. It’s still challenging to find an available appointment this week, but the website encourages patients to keep trying in case of cancellations.

Some residents have also reported success in calling their primary care provider or local pharmacy directly. UCLA patients received an email this week saying that the new directive to expand vaccine eligibility did not come with an influx of shots, and patients might need to wait a bit longer.

Appointments require detailed personal health and insurance information, so anyone who’s scheduling for older family members might benefit by having them with them during the process.

Will the county run out of vaccines?

LA County Public Health Director Barbara Ferrer said the county has enough doses to get through the end of the week. By the end of last week, California had administered 40% of the 3 million shots it has received.

Former Health and Human Services Director Alex Azar said late last week that there was no federal stockpile of coronavirus vaccines, despite promises from former President Trump to governors across the country that he would release any remaining doses. That’s led to uncertainty over how many shots California will receive next week, and whether there will be enough to continue vaccinating at this increasing rate.

Garcia says if Long Beach runs out of shots, for example, patients who already made appointments will get priority when new shots come in. That includes people who made appointments for their second doses when they got their first shot.