The COVID-19 pandemic is taking a toll on aspects of life throughout Southern California, but it has hit particularly hard in South LA. A new light-rail line connecting Mid-City to Los Angeles International Airport and the construction of SoFi Stadium brought in new residents, mainly white, and pushed Black entrepreneurs to take a stand in their neighborhood before it became inaccessible. The county-wide shutdown has impacted all of those businesses, which already operate on thin margins.

LA County Supervisor Mark Ridley-Thomas holds the seat for the second district, and says that he is working hard to keep those businesses and residents afloat with a rent hike freeze and eviction moratorium.

“I think the Board [of Supervisors] has gone a considerable distance in trying to accommodate renters. But I want to hasten to make the point that we should not ignore or abandon property owners, mom and pop landlords, etc.,” he says.

He says the Board is trying to be balanced in its efforts to “check a lot of the boxes,” and they’re open to input from community members.

This week, the Los Angeles County Department of Public Health announced that mortality rates for the virus were highest amongst the county's Black residents. The second district is home to many of the county’s Black and Latinx residents. Ridley-Thomas says that the high deaths in the area’s Black community are due to historic disparities.

“We do know that there is an imbalance in terms of the distribution of resources, and so those things cannot and should not be denied,” says Ridley-Thomas. “But I think we need to follow that data rather than prejudge the data, and base our actions on the conclusions that we draw as a result of having analyzed the data in a very fair-minded way.” 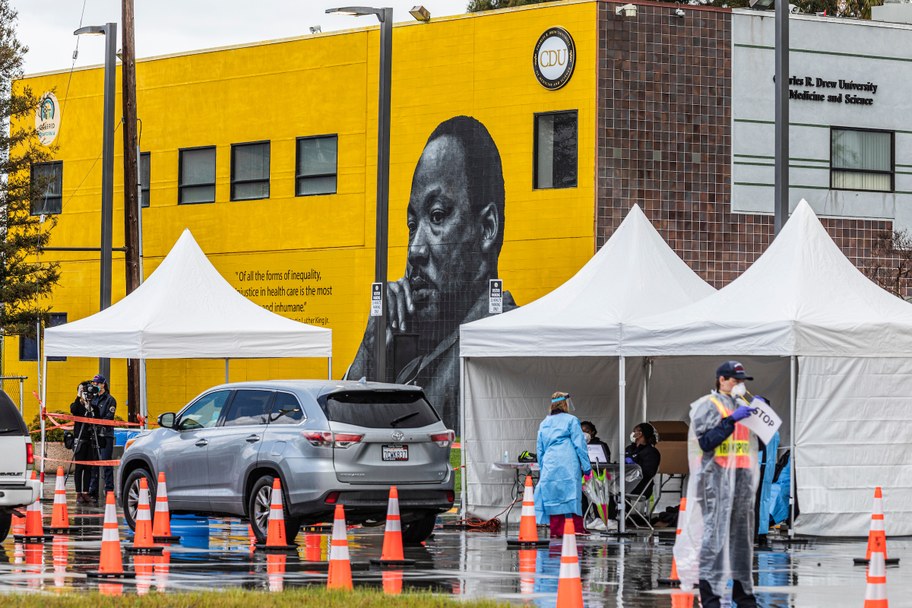 A COVID-19 testing site at the Charles R. Drew University of Medicine and Science this week. Photo credit: Ted Soqui for KCRW.

He says that the Charles R. Drew University of Medicine and Science and the new Martin Luther King Center for Public Health are evidence of the county’s work to repair those disparities. He believes that the facilities are prepared to take on a surge of cases.

“We are [in] unprecedented and extraordinary times. I say often and I believe that where there's a will, there is a way. We have an obligation to figure it out, and so that's what we must do.”