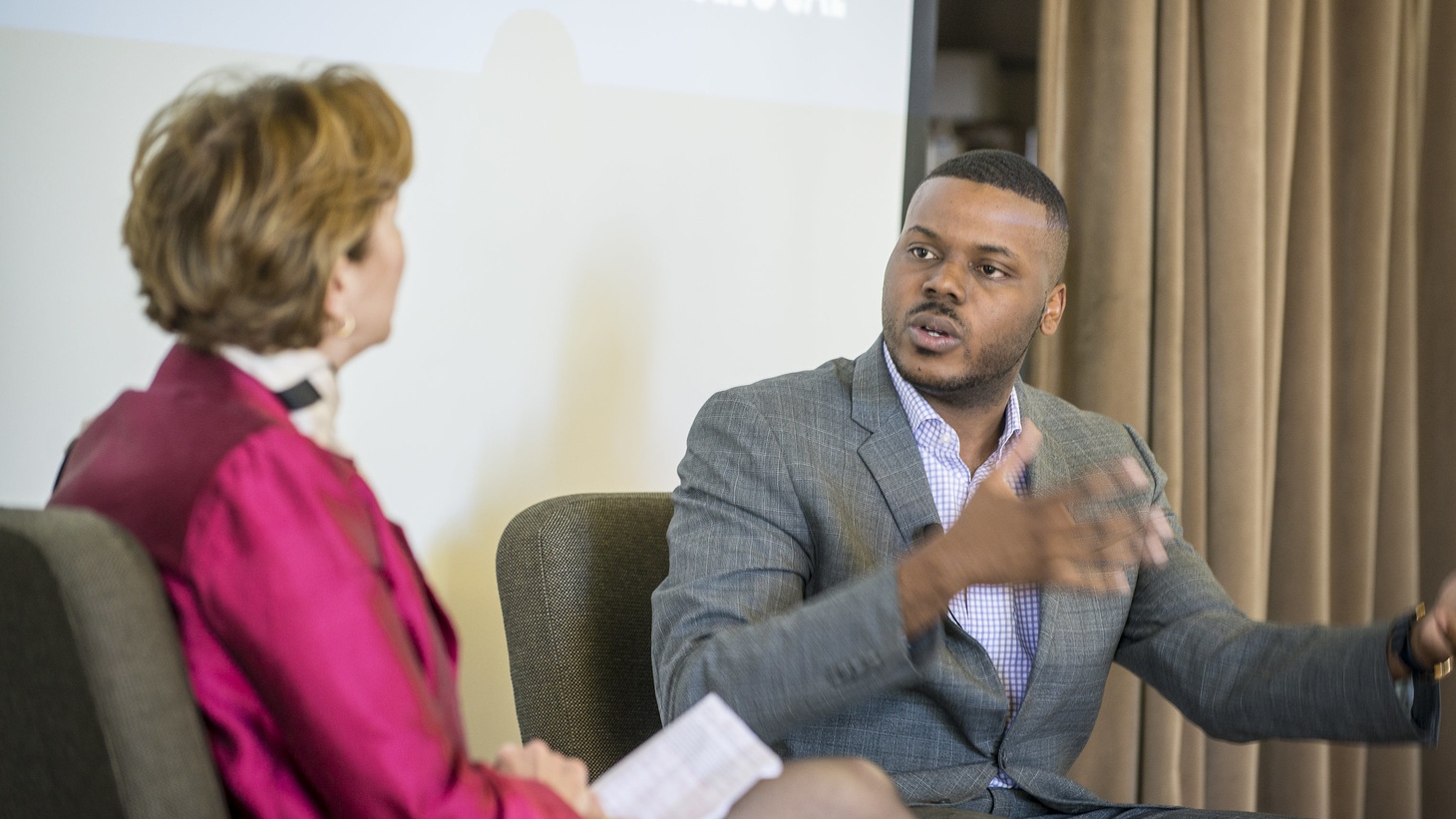 When Michael Tubbs was the mayor of Stockton, he was among the first civic leaders in the country to experiment with universal basic income. He says bold initiatives are needed to lift up the 15% of Californians who live below the poverty line. Photo courtesy of New America.

The size of California’s economy dwarfs any other state in the U.S. And it’s also the most diverse, thanks to industries like tech, entertainment, agriculture and international trade.

But California harbors a dirty secret: It has one of the highest poverty rates in the country. More than 15% residents here lived in poverty from 2018-2020, second only to the District of Columbia, according to a recent study from the U.S. Census Bureau.

A new campaign called “End Poverty in California'' aims to change that stat. It’s founded by Michael Tubbs, the former mayor of Stockton and a special advisor for Economic Mobility and Opportunity to Governor Gavin Newsom.

How do you define poverty?

Michael Tubbs: I define poverty as the inability to meet one's basic needs. The inability to pay for shelter, food, et cetera. And by that definition, our current poverty measures are inaccurate and inadequate because it only measures those at the very bottom. But not those who are barely making it.

The anti-poverty campaign calls for creating baby bonds for every child in California. How would that work?

Baby bonds are a powerful tool to ensure your next generation — even if they are born in poverty — has the resources by the time they are adults to really have a nest egg for a house down payment, to start a business, and to pay for school.

It's exciting because there's already momentum in the state on that. Senator Nancy Skinner has introduced a bill to provide baby bonds for what she's calling COVID kids or kids who lost a parent or a caregiver to COVID.

We know that in addition to those kids, there are a lot of kids in California who deserve sort of an investment that accrues interest. By the time children are 18 or 19, they are able to start their adulthood with an investment from the state that allows them to take advantage of the opportunities that exist as adults.

Economist Darrick Hamilton has done research, and it has shown that baby bonds, when implemented, have the potential to end the racial wealth gap in one generation. It could be anywhere from $5,000 to $15,000 to $20,000, depending on what's put in. And as a young adult, that's something, particularly when your family is living paycheck to paycheck.

How do you think we can increase access to jobs and strengthen employee protections?

I think a good example is what we saw recently in California, with the fast food councils. It's really about how you make sure in the industries and in the clusters, which disproportionately higher low-income workers, that those workers have a voice and that they're not victims of waitstaff, that they're not taken advantage of because their immigration status, and that they're given a seat at the table to earn some equity.

You're also talking about things like investing in child care, providing paid family and sick leave, and high quality job training. How would all this be paid for?

I think it's a mixture of things. The state has had a $45 billion surplus because of those who have done well in the state. When they do well, the state makes more, and we know that's happening in the context of a lot of people doing very badly.

We also have to look at [it] not as a cost, but as an investment because when you make child care more affordable, for example, you're allowing a lot more people to work to contribute to pay taxes.

When many small businesses are struggling these days, how can they pay higher wages?

But I would argue that most small business owners don't like seeing trash and homelessness on the streets and don't like the fact that their employees have to come to work sick.

I think part of it is being very thoughtful with our policy decisions. There are some sectors that aren't small businesses that hire a lot of low-income workers. Those who are making millions and millions of dollars of profits, they should be able to do a little bit more for their workers.

Are you pushing for changes for gig workers?

I think that we've seen, particularly this pandemic, that gig workers deserve some sort of protections as well whether it's a conversation around portable benefits or what we saw with Prop 22.

But there are a whole bunch of folks who are working in our economy, who have no protection, who have volatile wages. We all end up paying for it anyway, with health care costs with emergency room costs.

In the end, we're not going to solve poverty in one year or with one policy, but with a consistent focus on this as [a] north star for the state.

This is the issue we want to solve by actually believing that we'll come to win-win solutions where small businesses are able to thrive, and their employees are able to pay rent.

The name of your campaign “End Poverty in California” is the same as a program launched by Upton Sinclair in the 1930s when he ran for governor. Why do you think you've got the answer, whereas many other people and programs have failed?

I think what's different is COVID-19 has really illustrate to all of us that we live in a time of pandemics, and that economic resilience is tantamount to continuing to be formed as a society and as a community.

We can't really fight COVID-19, wildfires, floods and climate change without dealing with poverty and economic insecurity. We also need to be very intentional about amplifying and lifting up the voices of those actually impacted in poverty.