Los Angeles City Council President Nury Martinez says she wants homeless encampments restricted in her district because her constituents, including immigrant, working-class families, can enjoy public spaces. “They don't have the luxury to take their kids to Disneyland on the weekends, so they go across the street and enjoy the local parks. ... People get married at our parks. People enjoy barbecues and birthdays, and even Quinceañeras.” Photo by Shutterstock.

Homeless encampments will be banned from more parts of Los Angeles in a month. Mayor Eric Garcetti signed the anti-camping ordinance Thursday, just a day after the majority of the City Council, including Council President Nury Martinez, voted to approve the new law.

That means it would be illegal to sit, sleep or lie within 500 feet of public facilities, such as schools, public parks and libraries. People who violate the ordinance or resist to comply with the new rule will face fines.

The law to restrict homeless encampments has been a contentious issue. Property owners fiercely called for tougher measures to move unhoused people out of their neighborhoods, while housing advocates claimed the ordinance inhumanely criminalizes homelessness.

Despite frightening incidents, Martinez tells KCRW she supported the anti-camping ordinance to allow her working-class constituents to safely enjoy public spaces in their neighborhoods.

She also says that she will soon decide whether to run for LA mayor, but she’s taking a cautious approach because of the potential impact the campaign would have on her young daughter — along with threats publicly made against other female leaders in other parts of the country.

KCRW: Do you still feel confident that you made the right decision by voting to restrict homeless encampments across the city?

Nury Martinez: “I sure do. The current situation is unsafe for all Angelenos. The ordinance really gives us the power to govern our city again because I think that we've lost our way over the last couple of years, unfortunately.

We have an obligation to folks to bring them indoors first and foremost. We also have to work with solutions to ensure that we're doing that with dignity, consideration and respect. That's not lost on me.

But I also feel very strongly [to look out for] mothers who are walking their children to school every morning, people walking through their neighborhoods, and seniors who have to navigate through the debris on the sidewalk. There's just no justification for that.

And communities that have seen this crisis blow up the most in their neighborhoods also deserve the ability to safely navigate their public spaces.”

You previously said immigrant families’ rights to enjoy certain facilities were often overlooked as homeless encampments grew. What do you mean by that?

“I think all neighborhoods deserve it. But I particularly talk about the immigrant experience because I'm a daughter of immigrants.

The majority of my entire life has been spent in these neighborhoods that saw me grow up. I was born and raised in the northeast San Fernando Valley, and I continue to raise my family here. My mother still lives here in the community of Pacoima.

Oftentimes, what I don't hear is the voices of immigrant families who often work two or three jobs just to put food on their table. [They] lived in cramped conditions like small apartments or converted garages.

They don't have the luxury to take their kids to Disneyland on the weekends, so they go across the street and enjoy the local parks. You can come into my neighborhood any weekend, and you will see how utilized our neighborhood parks are. People get married at our parks. People enjoy barbecues and birthdays, and even Quinceañeras on Saturdays at our local parks.

I often don't hear their voices and their concerns because they're often too busy working within their families. I think it's important to also hear from them in terms of the quality of life that they want to see in their own neighborhoods.

We can’t continue to govern and only hear the voices on Twitter and social media. Oftentimes, these communities don't have those voices or that ability to communicate that way.”

Your home was vandalized by people who may have been upset about your housing policy decisions. Are you concerned that activists may further threaten you personally or your family?

“This year has been a year of threats. Verbal harassment and now vandalism — they’re not going to stop me from doing what I have to do.

My family does not welcome this. Sometimes I have to stop and think about my 12-year-old daughter who has to wake up to some of this stuff going on. But I did not and I will never legislate based on fear.

… I grew up in an activist family. The activism that I know growing up was fighting for my mom's job when it was sent overseas to Mexico. Two thousand people lost their jobs then in Pacoima.

These cowards who came to my home to vandalize and intimidate me — it’s just not going to work. How is that going to help us bring people inside any quicker? It's not.

I don't respond to these kinds of tactics. These are the streets that I know and the neighborhoods that I care about. These cowards who came to my neighborhood probably don't even live here. I'm certainly not going to legislate based on fear. I'm going to continue to do my job.”

You and Mayor Garceti made the announcement that all city employees will have to either show proof of vaccination or get tested for COVID every week. Why not a full mandate?

“We're debating that. It’s still in the works. I don't think we can ask Angelenos to get vaccinated if we're not doing it ourselves as public servants. We need to set an example and hold ourselves accountable. I think it starts with our city employees. 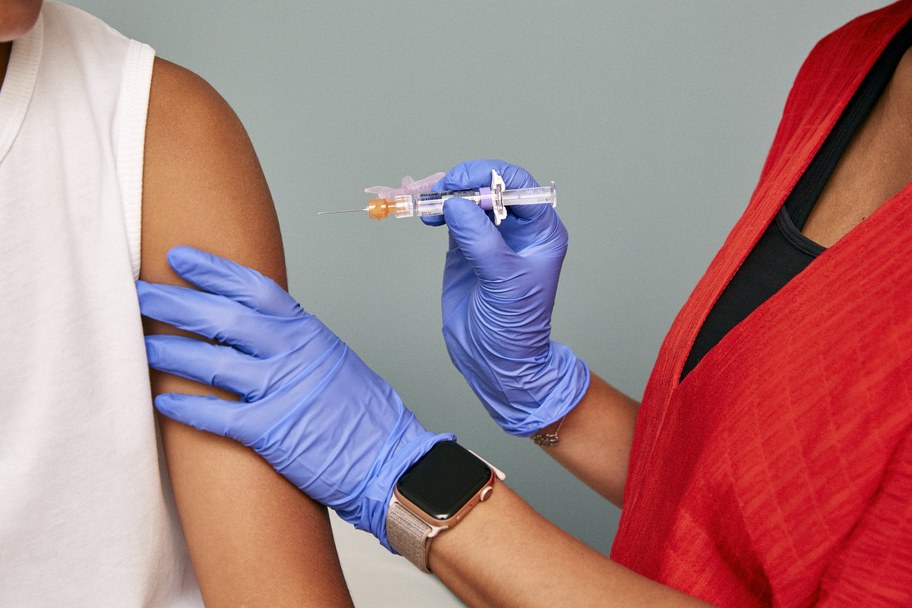 Martinez thinks one of the reasons Latinos lag in the vaccination rate is that many of them cannot afford to walk away from their jobs to receive the shots. “Many of the conversations that I have with community members are about getting the time off to go get vaccinated and then possibly taking a day or two just to recuperate in case you have side effects. We have to continue to talk about having some flexibility for some of these essential workers, and people who don't get paid time-off to be able to do this.” Photo by SELF Magazine via Flickr (CC BY 2.0).

Do you worry about pushback from some of the unions representing city workers, just as the LAPD and the LAFD?

But so far, I have not heard a whole lot of hesitation. I think everybody recognizes that we all need to do our part and step up. They're all dealing with small pockets of folks who don't want to get vaccinated with symptoms, are reading misinformation, or just don't believe in the vaccine.

We're all having to grapple with these groups of folks that we have to convince to step up and do their job. But I haven't heard too much pushback from our union leaders.”

Despite the robust vaccination campaign, Black and Latino communities are still lagging in getting vaccinated. What’s going to take them to get the COVID shot?

“I've said this in Spanish, too. What is it going to take? Is it going to be you getting sick, getting hospitalized, being put on a ventilator, or seeing a loved one in the hospital die from this virus?

For the Latino community, many of the conversations that I have with community members are about getting the time off to go get vaccinated and then possibly taking a day or two just to recuperate in case you have side effects. We have to continue to talk about having some flexibility for some of these essential workers, and people who don't get paid time-off to be able to do this.

The other part is hesitancy. People just don't think this is going to happen to them. They don't think it’s real unless they see someone get sick. I need them to take preventative measures to not only protect themselves but their children and their family members.

What I did this last month is door-knocking in some of the most dense areas in my district in North Hills and Panorama City, and actually taking the vaccine with us. I had two firefighter women who went knocking doors with me. We actually gave a number of folks a shot in the arm right there. By actually taking it to them — the campaign is called ‘Vaxxed up.’  I want to continue to do more of these events.”

Are you considering a possible run for Los Angeles mayor?

“This is a role that I'm seriously considering. I'm not making any secrets about that.

But when women are running for higher office, that tends to be more of a conversation that needs to be held with your family. These conversations are continuing to happen. I very much care about how this would impact my 12-year-old daughter. I care very much about her opinion. My mom's 84 years old. I watch over her as well while my sister stays with her now. These are all things that I consider.

But I also saw how the election in New York played out. There has never been a female mayor leading two of the largest cities in the country. I'm not blind to that.

I also look at leaders like Governor Gretchen Whitmer, Nancy Pelosi and AOC [Alexandria Ocasio-Cortez] — all the hate that they endure. It is a very difficult job to run for office. Women in particular during this pandemic have endured so much hate and backlash because we had to get up and make some tough choices.

These are all things that I'm considering, but I will let you know. I'm getting closer to making a decision but my first job is to represent my district and to lead this council.”