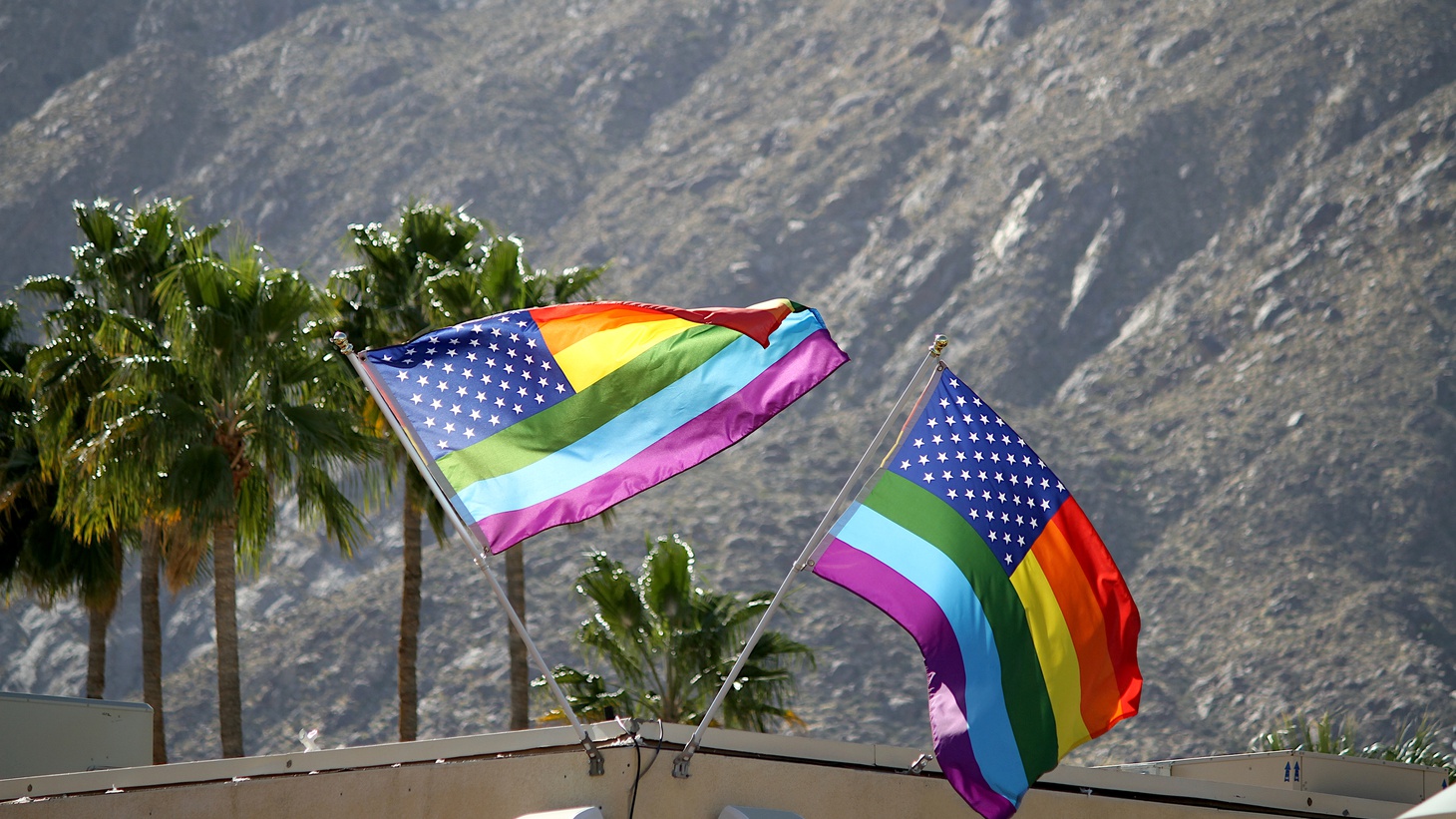 Gay pride rainbow flags fly along Arenas Street in Palm Springs, California. The city will be represented by GOP Congressman Ken Calvert, thanks to redistricting. Some residents are worried about his anti-LGBTQ voting history. Photo by Shutterstock.

After the once-every-decade redistricting process shook up California’s political boundaries, Palm Springs, a city known for being a LGBTQ haven, will be represented by a member of Congress who has previously voted against same-sex marriage.

Some members of the desert oasis community, like Palm Springs Mayor Lisa Middleton, are worried about the change.

“I'm always anxious to work with my friends in Western Riverside County, but the Coachella Valley has a specific identity,” says Middleton, who is California’s first transgender mayor.

Palm Springs has had a storied LGBTQ legacy for decades. According to Middleton, the LGBTQ community has grown particularly large since the 1980s when many HIV-positive gay men moved into the region. In 2017, the city elected the nation’s first entirely LGBTQ City Council.

“In Palm Springs, [we get] over 5.5 million visitors per year, and the LGBTQ market is an incredibly important part of our brand,” explains Middleton.

Palm Springs once belonged to the reliably Democratic 36th congressional district. However, under the new finalized maps, it joined the largely conservative 41st district, which includes Corona and Lake Elsinore.

Palm Springs being represented by a Republican isn’t a new concept. GOP Representative Mary Bono was a political force in the region until the last round of redistricting changed the maps. But Middleton says Palm Springs is facing a new political climate under Calvert’s leadership.

“Congressman Calvert comes from the Trumpian approach to politics.”

Throughout his career, Calvert supported the federal Defense of Marriage Act, which defined marriage as between one man and one woman, and he backed Proposition 8 in California, which sought to ban same-sex marriage.

“This is a man who has never voted with the LGBTQ community on any issue. At every opportunity where he has had a choice to stand up for equality, he has resisted that choice. That’s something that we understand and it will have an impact.”

While Calvert says he believes the right to gay marriage is the settled law of the land and opposes any attempts to revisit the groundbreaking Supreme Court decision, Middleton fears the current Supreme Court would be able to undo the progress for the LGBTQ community.

“It would be a tragedy of immense proportions should the Supreme Court ever overturn our right to marriage.”

But the recently redrawn map may also affect the long-serving GOP congressman as Riverside County is now an effectively purple district under the new boundaries. Joe Biden barely carried the region in the presidential election, while voters narrowly chose to remove Governor Gavin Newsom in the 2021 recall. That could provide a challenge for Calvert’s reelection potential in the district that was once overwhelmingly Republican.

Despite their clear ideological and political differences, the Palm Springs mayor says she is willing to work with the Republican congressman for the good of the people.

“We want to … see him reach out and come to understand this community and the people who live here.”

KCRW reached out to Rep. Calvert’s office but has not heard back.