Californians reacted quickly to the news that former Minneapolis police officer Derek Chauvin was found guilty on all three counts related to the death of George Floyd. The charges were second-degree unintentional murder, third-degree murder, and second-degree manslaughter. Judge Peter A. Cahill revoked Chauvin’s bail, and sentencing is expected within eight weeks.

Some took to Twitter. Others took to the streets to gather with others in person.

Raymond Ross spoke to KCRW on Tuesday after the verdict was read: “This is the scene of joy and celebration that the law was on our side for once. And I was able to see that. Rodney King was on tape the same exact way.”

Ross was speaking from the corner of Florence and Normandie in South Los Angeles, where truck driver Reginald Denny was infamously attacked during the 1992 LA riots. The event is considered an inflection point during the first night of the riots, after a jury acquitted four white LA police officers who were caught on-camera beating Rodney King.

Ross also pointed to the recent death of Daunte Wright in Brooklyn Center, also at the hands of police. “This is only one win because we lost hundreds. We still got another young boy out in Minnesota who got killed and the cop claimed that it was a Taser. But let's just take it one day at a time right now and be happy that we accomplished something where we could be heard.”

Ross said it was a sign of evolution. “I believe this is indicating that we can change ... we want to normalize this.” 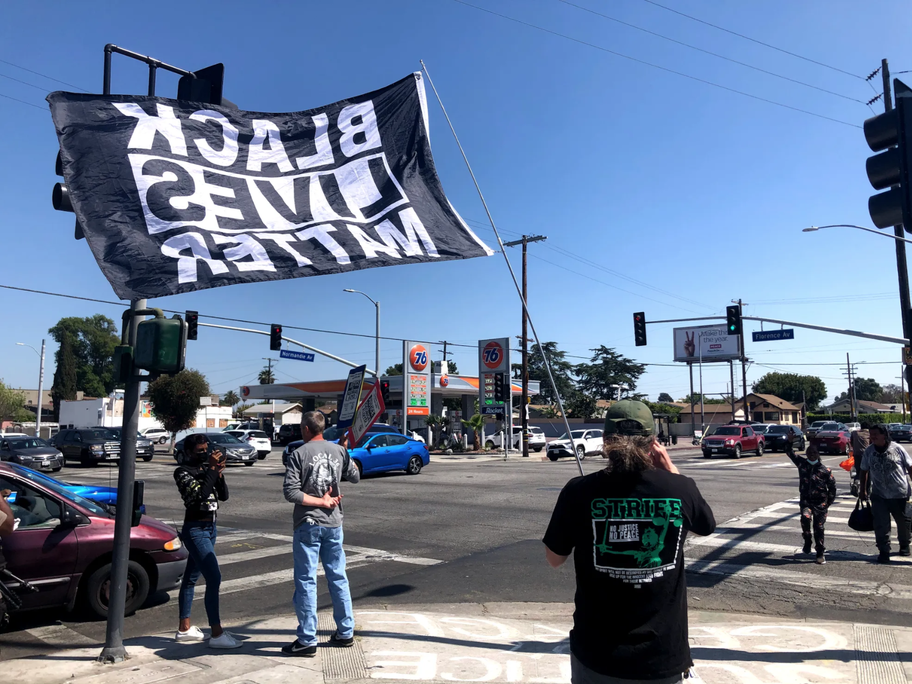 Demonstrators stand at Florence and Normandie in South LA to celebrate the guilty verdict of Derek Chauvin. This is where the notable attack on Reginald Denny happened during the LA riots in 1992. Photo by Caleigh Wells/KCRW.

“We were sitting in class, anxious. I wasn't listening to anything. I underestimated my own emotional reaction to that. I couldn't even listen to my teacher. I couldn't hear anything because this was historical,” Theard told KCRW. “There's so much backing this verdict. I was nervous, ‘Oh my god, if this goes wrong, LA's gonna be a warzone. ... I was mentally preparing myself to deal with that disappointment and that discouragement.” 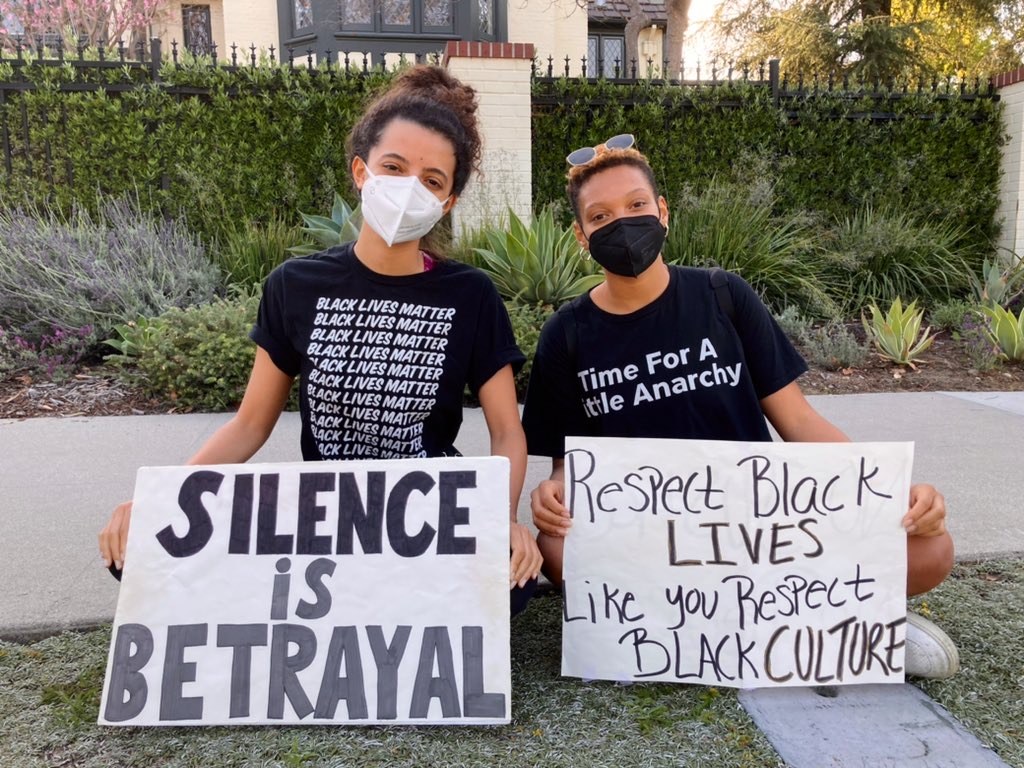 Akinola added, “As a Black person … you can't just live and walk and breathe in this country. You’re constantly protecting yourself against anything that could happen.”

South LA resident Celia Rivera told KCRW she cleared her schedule after learning that the verdict would be read on Tuesday. She wanted to make space for the wave of emotions she knew she’d experience. And instead of joy, she felt pain when thinking about the context around the conviction.

“It is an odd space, recognizing that today is a historic moment, but that one moment of accountability — because it's not justice — one moment of accountability does not make up for centuries-long violence. It is a drop into the ocean,” Rivera said. “I think the expectation that we all should be in celebration is clouded by the trauma of why we're here in the first place, and it’s not a celebration. What justice really looks like is for George Floyd to be alive. And that’s not possible, so we spend another day, another year in pain.” 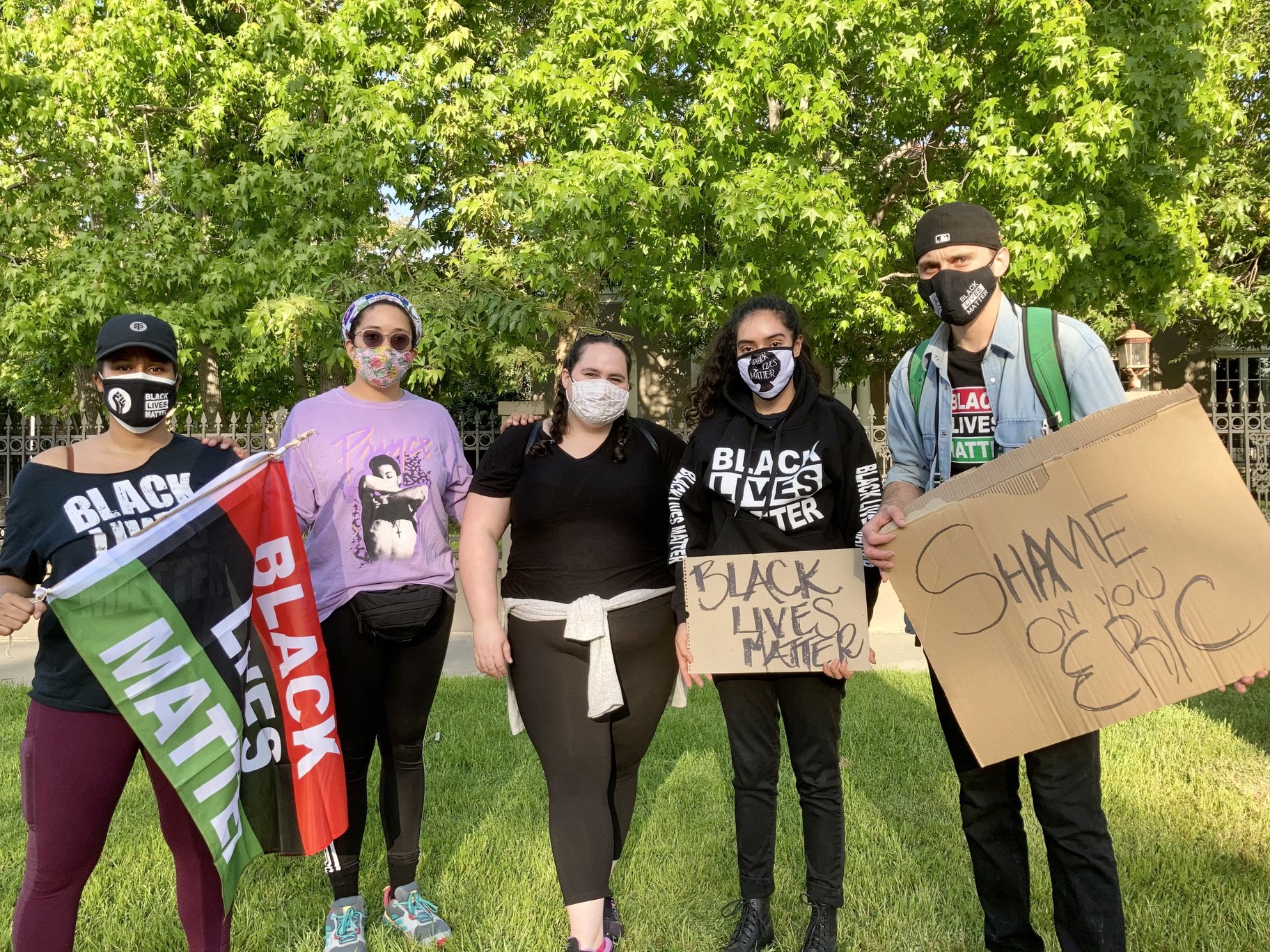 Celia Rivera, who’s holding the Black Lives Matter flag, does not feel like justice was served in the trial of Derek Chauvin. To her, justice means Floyd never would’ve died. Photo by Danielle Chiriguayo/KCRW.

Pastor Michael J.T. Fisher came to Grand Park in downtown LA to take part in a gathering of local clergy.

“My emotions coming up to the verdict were anxiety, because we’ve been here before, where the evidence was presented and it seemed like it would be an easy decision,” Fisher told KCRW. “But I was very very relieved and proud in our judicial system, to see that for once it seemed as if they cared about the lives of marginalized people, people of color.” 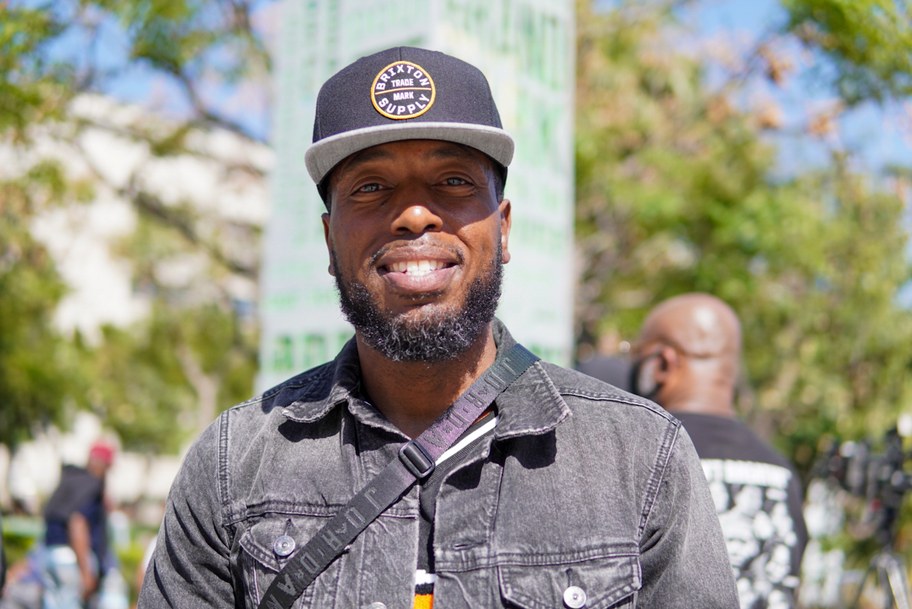 “I was very very relieved and proud in our judicial system, to see that for once it seemed as if they cared about the lives of marginalized people, people of color,” Pastor Michael J. Fisher told KCRW. Photo by Angel Carreras/KCRW.

Fisher continued, “For me as African American myself, it was relieving to know that raising my son, that if something happens to me, they’ll care about my life. And the person who murdered me won’t get off just because they work for law enforcement.”

U.S. Rep. Karen Bass in a statement: “Thirty years ago, Rodney King was brutally beaten by police. The video of the assault shocked the world, but not the jury, who let every single police officer responsible roam free.

Today is different. Derek Chauvin murdered George Floyd and has been convicted of his crimes.

But as we exhale from the relief of justice finally being delivered in a case like this, we have to remain focused on the sentencing, which I believe should be the maximum, and the underlying movement that this case has come to represent: the need for accountability and real, substantive, transformative reform to our policing system.

The United States House of Representatives has twice passed the George Floyd Justice in Policing Act. We must continue this fight – so that rulings like today’s verdict, don’t come as such a surprise or such a relief. Justice in this country should come as expected, for all.

I also want to thank my friend and former colleague, Minnesota Attorney General Keith Ellison, who led the team that ensured this result.”

“Today’s jury verdict in the tragic killing of George Floyd is a reminder of the need for America to address the systemic bias and institutional racism which exists in many parts of society, including education. While justice was served today, it does not change the fact that a life was needlessly taken. Much has to change to avoid more tragedies like this one.”

Relieved by the guilty verdict AND...
Justice for #GeorgeFloyd required that we #ReimaginePublicSafety and #DefundThePolice. Meet us in front of the Mayor’s mansion RIGHT NOW.
(Google Getty House Los Angeles for street address.) #BlackLivesMatter

Guilty on all counts!!

Today, our nation took a step forward on the winding journey toward healing, reconciliation, and accountability. But this conviction does not return George Floyd to the arms of his siblings and children.

George Floyd would still be alive if he looked like me. That must change.

No conviction can repair the harm done to the Floyd family, but today’s verdict provides accountability.

Now, we must continue our work to root out the racial injustice that haunts our society.

Nothing can eliminate or heal the pain that George Floyd’s murder has caused. But now the jury has spoken decisively and ensured that Derek Chauvin will be held accountable. (1/3) pic.twitter.com/bquuM926LS

Derek Chauvin has been found guilty on all counts.

Justice has been served.

Derek Chauvin murdered George Floyd in the light of day, with a maliciousness caught on tape far too many times in our history. In taking the life of one of the people he was sworn to protect, Chauvin disrespected the solemnity of his duty in the worst possible way.

Justice has been served today and our love goes out to George Floyd’s family. The jury absolutely did the right thing. We know there is so much more to do to break down racial injustice and achieve equity for all. I am hopeful this verdict can be a turning point for our country.

The jury arrived at the correct conclusions in the #DerekChauvinTrial. https://t.co/9uuRF9AvLp

“Thank you George Floyd for sacrificing your life for justice.” pic.twitter.com/JfapSsKdtX

A previous version of this story misattributed a quote to Samantha Theard. It has been corrected to reflect the correct speaker.