Members of the Gutierrez family mourn graveside, during a non customary military burial service amid an outbreak of COVID-19, for Robert Gutierrez, who was given a Purple Heart award for serving in the Vietnam War and passed away of a non-coronavirus related death, at the Bakersfield National Cemetery in Arvin, California, April 3, 2020. Photo by Shannon Stapleton/ Reuters.

As California finally starts showing signs of getting a handle on the coronavirus, health officials up and down the Golden State are concerned backsliding could happen if we ease up on precautions like wearing masks and avoiding crowds.

But whether you believe the experts or not could depend on your political views.  A recent statewide poll from the California Health Care Foundation found three-quarters of liberals “strongly support” stricter health orders if they prevent more deaths. Only 40% of conservatives shared that view.

We’ve seen partisan protests over coronavirus restrictions not only break out in beach towns and at the state capitol, but in local grocery aisles and shopping center parking lots.

“I've gotten calls from constituents: ‘This guy's jogging down the street by me, and he doesn't have a mask on,’” says city councilman Bob Smith. “‘You gotta do something. And I see people out at a restaurant, and they don't have a mask on, and we need to enforce it.’ And I also got calls from people that, ‘The Governor's a dictator, and we gotta get back to church.  You gotta do something.’”

Those disparate calls from constituents aren’t coming from people in Culver City or Costa Mesa; they’re coming from residents of Bakersfield, where Smith sits on the seven-member city council.

Los Angeles and the surrounding county has continually snagged the Southern California COVID headlines. The county accounts for about a third of all the reported coronavirus cases in the state — and around half of the deaths linked to the virus.  But to the north, in Kern County, the number of cases is a lot lower. However, its positivity rate —the percentage of the people screened for COVID who end up testing positive — is more than double LA’s.

Both counties are dealing with some similar issues when it comes to fighting the virus. Each has a large population of low-wage, essential workers, and each has dealt with a number of workplace outbreaks. In Kern’s case, those are concentrated in the agriculture and food processing sectors. Farmworkers in particular have seen a high number of cases.

But what are things like on the ground in Kern County: are businesses following health orders; are masks the rule rather than the exception?

When it comes to downtown Bakersfield, the county seat, you see people in masks. To be fair, there aren’t a lot of people out and about because the pandemic has many businesses closed or working limited hours. On top of that, daytime highs in Bakersfield crest above 100 degrees for much of the summer, so that too puts a damper on walking around the city core. 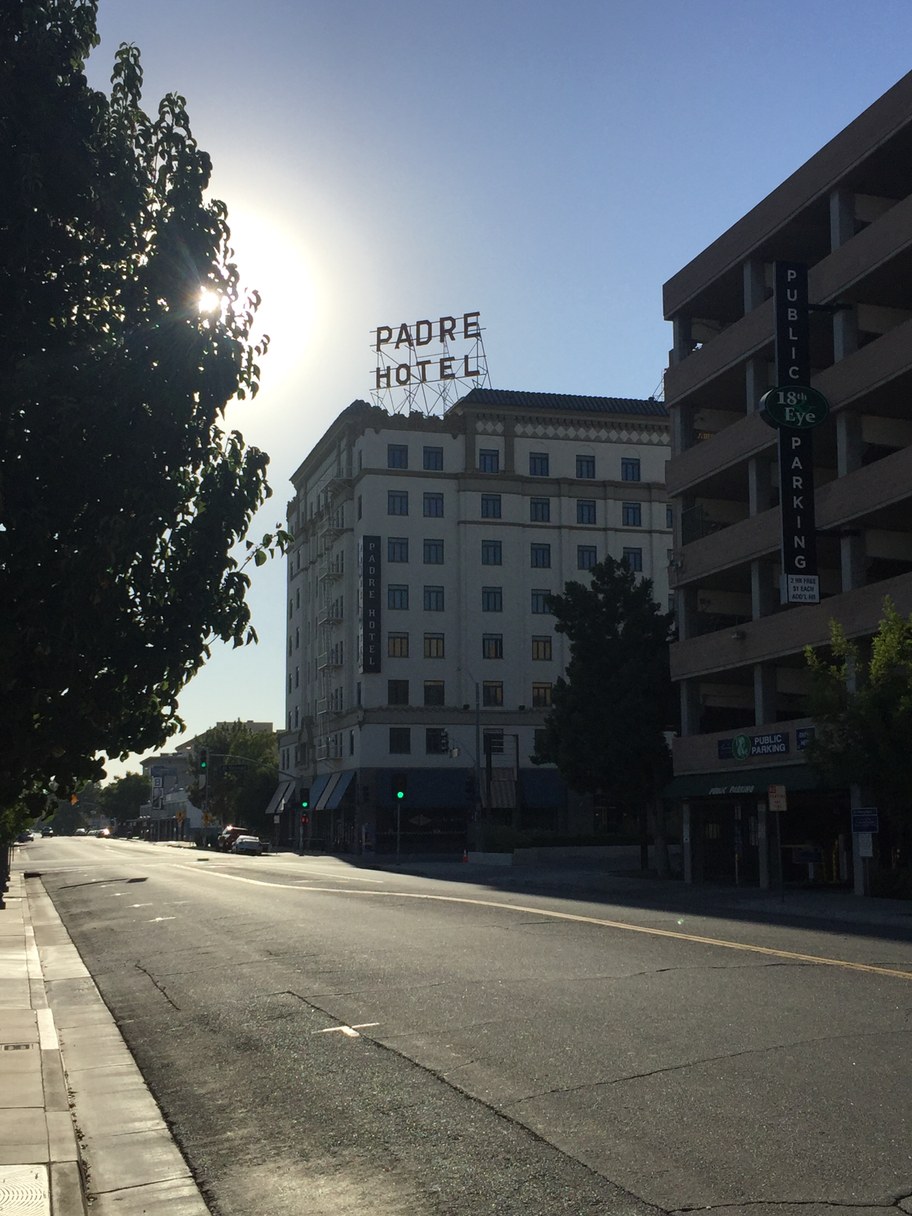 The Padre Hotel is a downtown Bakersfield landmark. On a recent hot afternoon, the streets of town are mostly abandoned as the summer heat and the pandemic keep people indoors. Photo by Matt Guilhem/KCRW.

Still, some of the restaurants in the heart of town have set up makeshift patios to serve as many customers as possible outside. The staff at most places are masked.

The key phrase is most places. During a recent visit to the community, a local greasy spoon called Zingo’s was fairly lax on following safety protocols. The staff weren’t masked, and it looked like if you were a regular you could sit inside rather than sitting in a small covered outdoor area.

Lynch is sitting inside a diner without a mask amid a global health crisis that’s claimed the lives of nearly 200,000 Americans; it’s clear he doesn’t trust the data. He also doesn’t trust the numerous doctors and experts that have come out against hydroxychloroquine. He says President Trump’s much touted coronavirus remedy works and that we don’t need an actual vaccine. 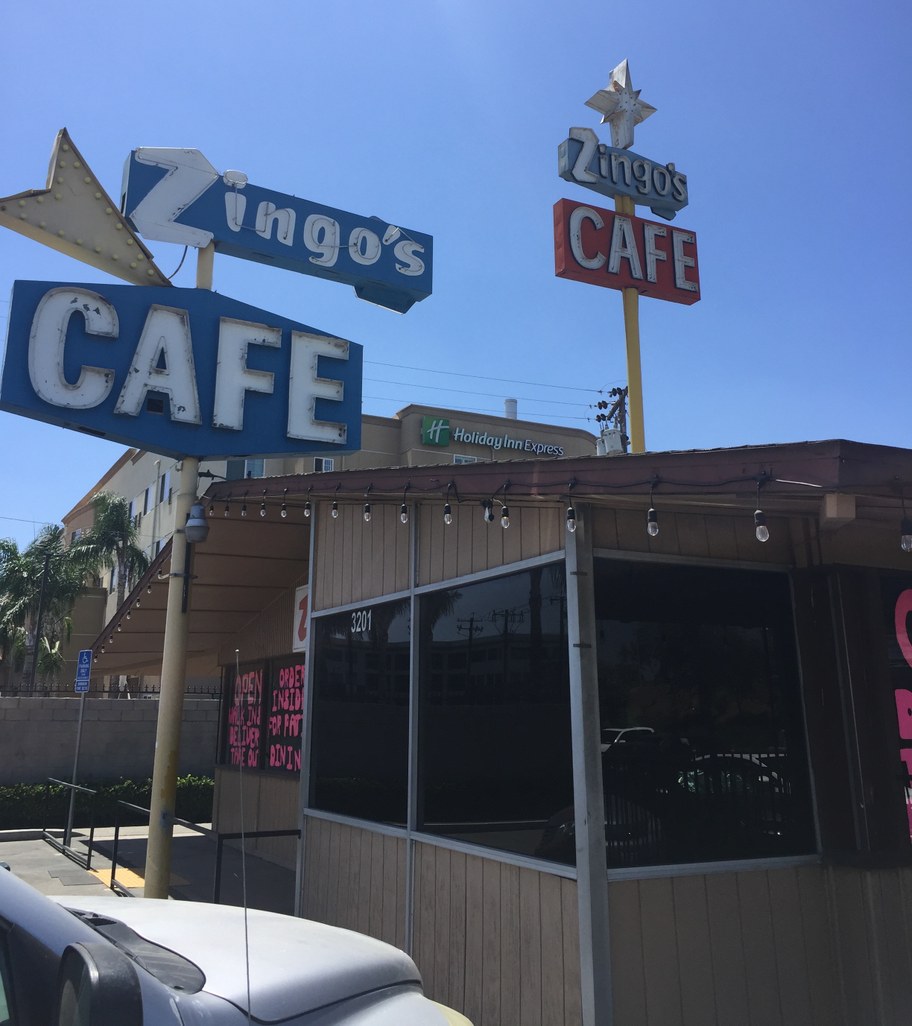 Zingo’s is a favorite with truckers. The diner offers things like ribeyes and BLTs along with chicken fried steak.. Photo by Matt Guilhem/KCRW.

Lynch isn’t alone in his faith in the president’s medical expertise. A couple of Bakersfield physicians who are part of a group called America’s Frontline Doctors posted a video online downplaying masks and boosting hydroxychloroquine as a treatment for COVID. Although the group has been rebuked by the medical establishment, Trump retweeted the video.

President Trump admitted to misleading the public about the severity of the coronavirus from early on in the crisis. He told journalist Bob Woodward in a recorded interview he consistently downplayed it, alleging he didn’t want to cause a panic.

While that’s how the top elected official in the land chose to deal with the COVID-19 pandemic, it’s a different story at the local level. In LA, where most city and county leaders are Democrats, Mayor Eric Garcetti and the LA County Board of Supervisors acted quickly to shut things down. They also moved fast to momentarily reopen this summer — something they’ve been criticized for, but in general they’ve followed the governor’s lead.

In Kern, the response has been a little different. Complaints are coming in from both sides: authorities aren’t doing enough to protect people or they’re overstepping and torpedoing people’s freedom with health restrictions.

The county sheriff, Donny Youngblood, has taken a firm position. He says his deputies aren’t going to be the mask police.

Youngblood is from Kern County and describes himself as the product of a conservative home. His laissez-faire approach syncs up with what we’ve seen in places like Orange County, where many residents view wearing a mask as a choice they should be free to make without government input.

As the pandemic has gone on, the virus has become increasingly political. That tension is clear when Youngblood describes how he thinks about enforcing health policies.

“As the Sheriff, I've struggled with my government wanting me to arrest people for going to church, to cite people for not wearing a mask, but to allow protesters to protest side-by-side without any concern,” says the sheriff.

Youngblood isn’t alone in saying his officers aren’t going to be the mask police. Don Barnes, the Orange County sheriff, said early on he too wouldn’t be playing that role. But California is a big place: 58 counties, 58 sheriffs, and 58 public health offices that are responsible for working with the state government to get through the crisis. Invariably, the situation is complicated and generates friction between some local governments and Sacramento.

In Kern County, several business owners give the state poor marks for its handling of the pandemic. Jenny Poncetta, the co-owner of Wool Growers is among them. The famous Basque restaurant has been in Bakersfield for more than 60  years and is something of a local institution. 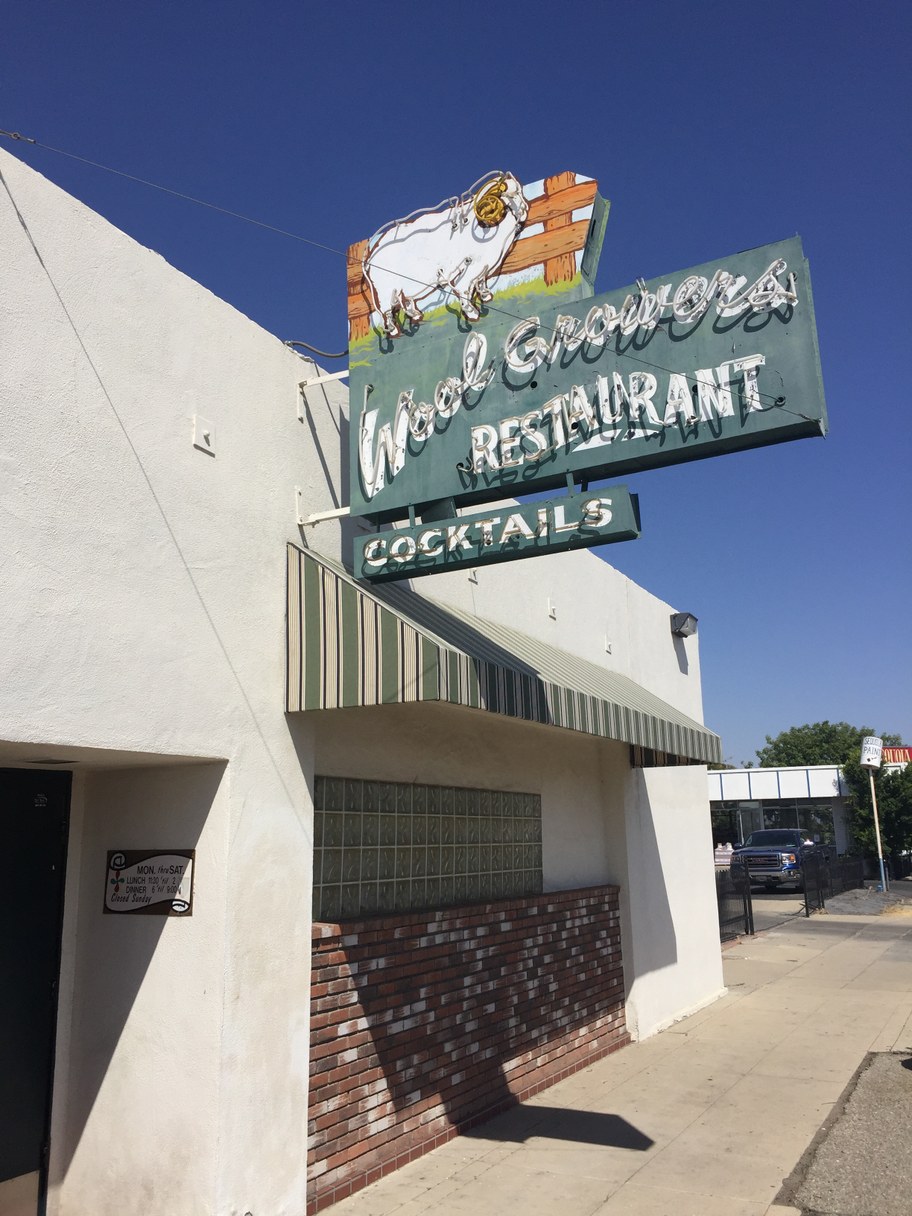 Wool Growers is known as a community gathering place in Bakersfield. Families have gone there for generations to mark a range of occasions, from weddings and holidays to funerals. Photo by Matt Guilhem/KCRW.

When it comes to masks and social distancing, Poncetta is completely on-board. While those messages have been consistent for months, she says communication from Sacramento has been anything but.

"The Governor gave us a day and a half notice when we got to be open after being closed for two and a half months,” Poncetta says with exasperation. “I mean, how in the world do you get a day and a half to get all your people back to work, clean up?  And then when he shuts you down, the same thing.  Or you hear it on the newscast, at noon, that you're to close--immediately.  Not tonight, not tomorrow morning, but immediately.  It's been crazy the way they handle it."

Some local health leaders also have a beef with the way the state’s handling things.  Matt Constantine, the Kern County public health director, told the LA Times he’s not getting the support he needs from Sacramento. He says he’s gotten the runaround from various state agencies when he’s turned to them for clarifications.  And he says the state hasn’t done enough to back him up when it comes to cracking down on local businesses violating health orders.

Meanwhile, Jenny Poncetta at Wool Growers says she’s doing the best she can to stay afloat.

"We're just hanging on by a thread,” says Poncetta. “I keep telling everybody, 'I'm not going to give up on my parents' dream.' I'm just going to keep hoping that we'll get the vaccine, that things will get better.  People like to come inside and dine. If it was cooler in Bakersfield and we could eat outside, that would be great. But it's not.  If we could get people to come inside again, I think we could get going.  And I feel hopeful that we will. It's just not knowing when." 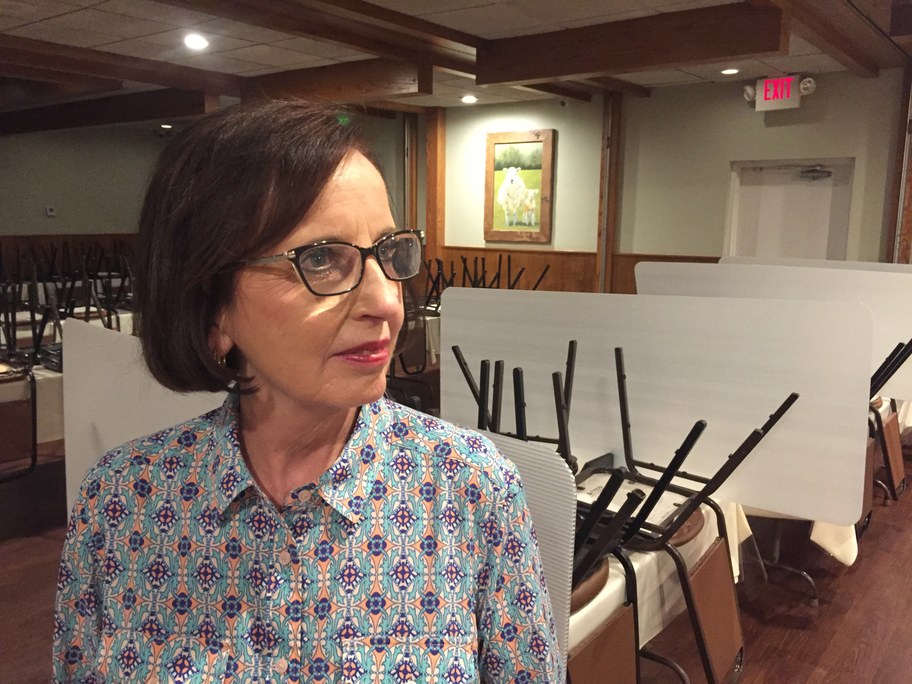 Jenny Poncetta runs Wool Growers with her daughter. The restaurant is one of a handful of Basque restaurants in Bakersfield that have been open for decades. During the brief period restaurants were allowed to reopen for indoor dining this summer, Poncetta invested in plastic partitions to separate guests at the traditionally family-style meals that are a hallmark of the Basque. Photo by Matt Guilhem/KCRW.

She says customers have been calling to book Christmas parties and that she’s already taken a few reservations. But, with no clear idea of how things are going to go, she doesn’t know if the restaurant will be able to fully reopen by the holiday season.

That sense of the unknown is not unique to Kern County. Restaurant owners, bar owners, and other business owners in Los Angeles have been confounded by the on-again, off-again health orders this whole time. That may actually be a point of agreement that extends beyond politics.

One area where a place like Kern County is very different as compared to Los Angeles is the large population of farm workers -- mostly Latino, heavily undocumented.

That population is having a hard go of it. Agricultural communities face really high rates of coronavirus infection. That’s especially true for California’s Central Valley. Politico found that six out of seven of California’s most COVID-ridden counties, per capita, are in the Central Valley, which is some of the most productive farmland in the nation.