Eliott Motta is a 40-something, single, warehouse manager born and raised in Los Angeles. He moved to Bakersfield a couple of years ago. Photo by Matt Guillhem/KCRW.

The coronavirus pandemic has thrown the door wide open to where some of us can live. After all, if you're going to work from the den or the kitchen table, you don't necessarily have to be close to your employer's office anymore. And that has some people looking to ditch high priced cities like LA and San Francisco. One of the top destinations for Angelenos pulling up stakes is just up the I-5 to Bakersfield in Kern County. It's a trend that's been gaining steam over the last few years as some LA expats look for a slower pace of life, where their housing dollars will go farther. In this edition of Red County Blue County our ongoing series about the connections between LA and its neighbor to the north Kern County, we talked with someone who's taken the plunge. 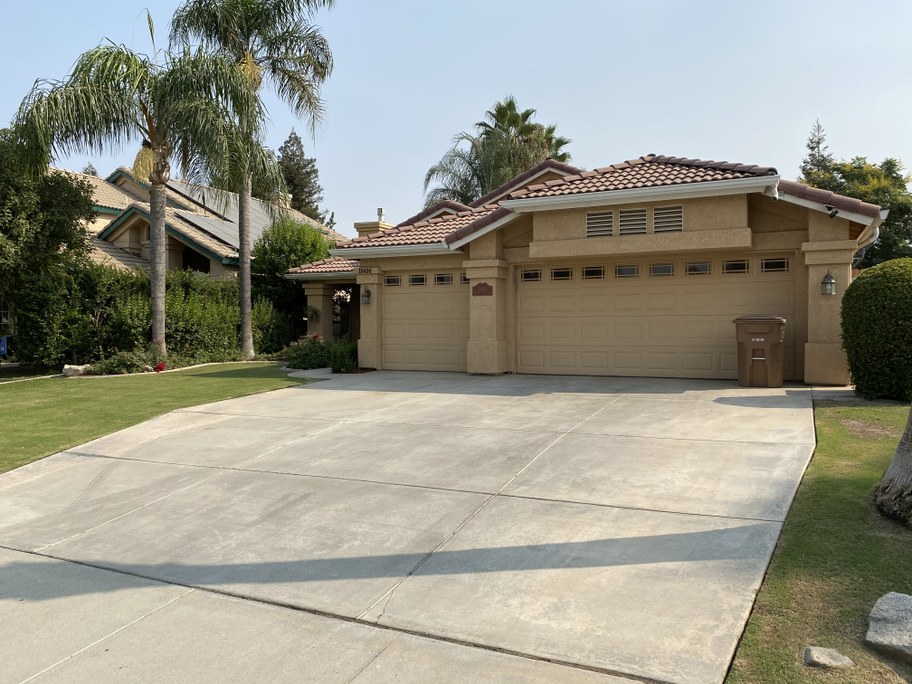 Eliott Motta is a 40-something, single, warehouse manager born and raised in Los Angeles. He moved to Bakersfield a couple of years ago, he bought a home there that's 50% bigger than his place in LA. One of his favorite parts of the house is his man cave.

And then there's the backyard with a pool.

“Also, I have my barbecue grill out here, we'll all grow on the weekends,” Motta says. “I do enjoy having guests over where we can barbecue especially when my family makes it out from LA out here. We have a good time hanging out in the pool.” 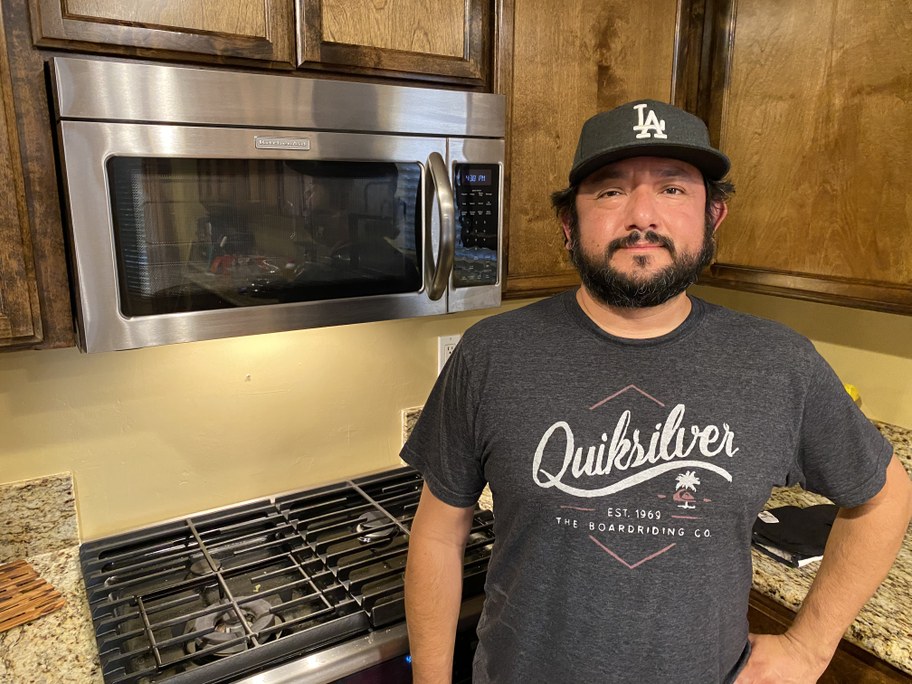 As nice as digs are. Motta says he originally made the move to Bakersfield because of work.

“My company consolidated some distribution centers in California and opened one up here in Shafter. So I was able to go ahead and transfer up here and open up that facility here.”

KCRW: What was your first thought when you got this job opportunity? Was it one of those situations where you say, hey, sounds like a good gig. But you know, I really wish it were somewhere else other than Bakersfield.

Motta: “Kind of I'm familiar with Bakersfield. So the first thing that comes to my mind was the heat. And then after thinking about it, knowing that it's only about two hours away from LA, I could have been somewhere else it could have been out of state. So I think Bakersfield was fine. And after I gave it some thought, it was it was something that I definitely wanted to do, especially with the opportunity I was given originally, you know, it was just more concentrating on work. But now that I've been here about a year, you know, I've been kind of you know, going out and making friends here. So, so far, it's been good.”

KCRW: Now some people might say, okay, you can afford a nice house in Bakersfield. That's great. But don't you miss LA, you know, the restaurants, the concerts, the clubs, all all the stuff to do?

Motta: “I do. And I did probably for the first year. But then just getting used to the quiet life here. I don't miss it as much. There's things to do here. They do have concerts, and I'll go to an occasional concert here and there. So it might not be LA but it still has a little bit of everything here to do in here in Bakersfield.” 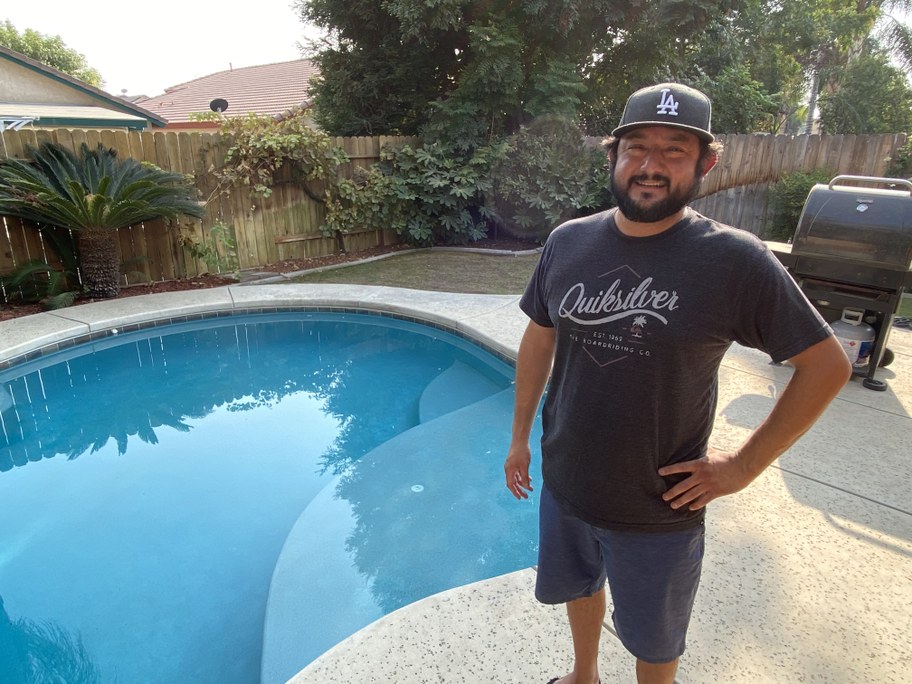 KCRW: How about your commute? How's that?

Motta: The commute is fantastic. It's actually about the same that it was in LA, it's 10 miles, but it's 15 to 20 minutes all the time versus my 10 mile commute in LA on the 605 which was anywhere from 30 minutes to an hour at any given time.”

KCRW: What about your co workers? Are they able to afford their own homes?

Motta: “Yes, a few of them also transferred from different areas and they also purchase their homes. Even some of our distribution center workers are able to buy a home in LA was rare for a warehouse worker to actually buy a home; you really didn't hear much of that going on just because of the property prices and the home values out there.” 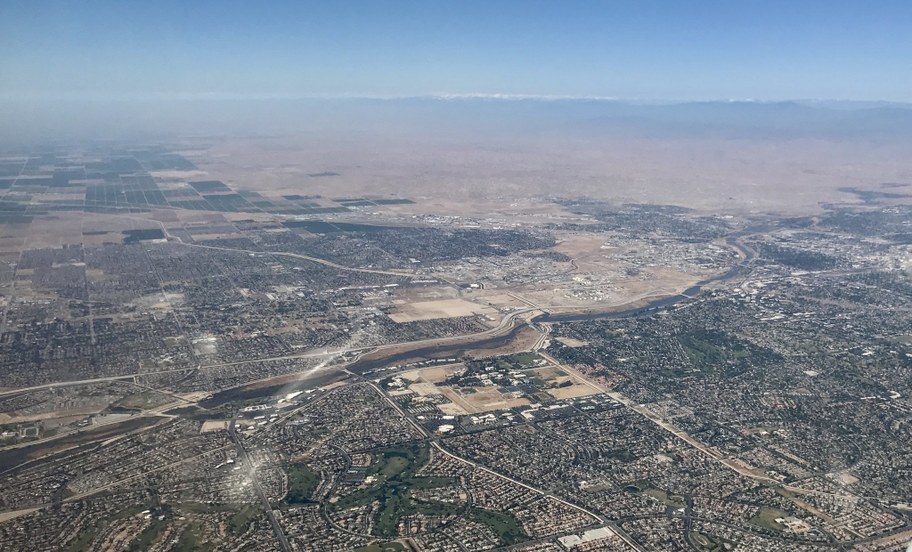 Aerial view of Bakersfield. Photo by Adam Reeder/Flickr (CC BY 2.0)

Jeanne Radsick is a realtor in Bakersfield and head of the California Association of Realtors. She says finances and job opportunities are often what attract people to the area. The median sales price at the moment is at about $285,000

“People consistently over the years have thought ‘oh my gosh, I'm going to Bakersfield. Holy smokes.’ Then they get here and they realize what a nice community it is. It's very much a Midwest feel,” Radsick says.

Radsick says the quality of life convinces them to stay.

“Our median sales price at the moment is at about 285,000,” she says, it's inching up no question. But think about what that buys you anywhere in the LA basin. It doesn't buy you much of anything. And so if you're looking at something under 350,000 I mean that's really a very lovely home. Perhaps up to 2000 square feet, it may or may not have a pool, but it's in a nice area. Trees. You know, what's not to like?”

Radsick has been working in the Bakersfield market as a realtor since 1987.

KCRW: Have [you] seen a lot of trends come and go is this development of people moving from LA from Orange County to Bakersfield? Is this fairly new or has it been going on for a while?

Radsick: “Yeah, actually is kind of cyclical. So I've been in the real estate business for Just some short period of time, when all of a sudden in the late ‘80s, there was a spike in pricing down in the Los Angeles basin, they were priced out of the market there. So they could come to Bakersfield, buy a brand new home in a lovely, lovely neighborhood and move in [and] go to good schools. And unfortunately, there was a commute cost, well, then, fast forward a couple three years and the market changed. And so when the property values drop down in Los Angeles, then they were able to sell their home here, and move back down to be closer to their jobs.”

KCRW: The stumbling block, sort of historically has always been that commute to work that if you work in the LA area, you're living in Bakersfield, it's a really rough ride to be doing that every day. But do you find that things are starting to change the last few years with more and more folks working remotely and saying, Hey, you know, I actually don't have to drive in every day.

Radsick: “We have seen that change. And of course, over the last five, six months with the COVID pandemic playing out? Yes, that's been an obvious change. And I don't think we'll never go back. I don't think we'll ever all go back to being in these huge offices, because productivity is actually better when you're on your own, and you're not facing all the interruptions.”

KCRW: Are there certain preconceptions about Bakersfield you find yourself having to address over and over again, that you're just like, gosh, I am so tired of hearing this.

Radsick: “One is the heat. And you know, the reality is I tell you what, you go from your air conditioned house to your air conditioned car to the air conditioned mall to the air conditioned office. So don't go mow your lawn when it's 100 degrees out, okay? Just don't do it. Otherwise, you're living your life the same way you would, I don't care where you live. So the heat is, is probably the biggest one. Air Quality is not as wonderful as what we'd like. With all the fires up in Northern California. We're at the bottom of a big bowl mountain range. So all the smoke from those fires has been trapped down in Bakersfield or at the bottom. And so yeah, I know we have periodically poor air quality.”

Radsick: “It started actually in the early 1960s. Bakersfield was a huge Basque community. A lot of sheep herders came from the Pyrenees. So they had some wonderful Basque restaurants that are still going today. Well, Johnny Carson, when he was a fledgling comedian, played to one of those local eateries that had a stage and he totally bombed. And he forever only referred to Bakersfield in less than glowing terms on his show.”

Listen to all our Red County Blue County stories here.