Santa Monica proposes to cut staff and amenities amid COVID-19 The Santa Monica pier and beaches on the Pacific Ocean are empty after California issued a stay-at-home order due to coronavirus disease (COVID-19) in Santa Monica, California, U.S., March 25, 2020. Photo credit: Lucy Nicholson/Reuters.

The affluent beach city of Santa Monica relies heavily on tourism and retail for its income. But during the COVID-19 pandemic, the city has seen a dramatic reduction in hotel occupancy taxes, retail sales tax, and parking fees. Santa Monica anticipates a $224 million deficit over the next two fiscal years (this year’s operating budget was just over $700 million).

Staff have proposed a plan to the City Council to restructure, rethink priorities, and reduce programs and services. According to a restructuring report, they propose city-wide reductions of $86.2 million in net ongoing costs, including laying off 337 permanent staff and 143 temporary staff.

Dilg emphasizes that even a shrunken city government will stay true to its traditional core values. She tells KCRW, “Long before COVID-19, our City Council articulated values of equity, inclusion, resilience, safety, stewardship, accountability and innovation. So how do we run a changed city government that still is a leader on sustainability and well-being? Those are hard decisions. But we do take them very seriously. We will continue to be Santa Monica.”

However, many of the programs and amenities that gave the city its civic identity will be gone or reduced. These include family-friendly programs at parks and libraries,   after-school programs, service on the Big Blue Bus, and bike safety programs.

The city’s two public pools, which symbolize equity and inclusion while promoting public health, are affected. The Annenberg Community Beach House pool will be closed through 2020. There will be severely reduced hours at the popular Santa Monica Swim Center, which offers subsidized swim lessons to thousands of children.

Architectural ambition will be diminished as the city cuts an urban designer position and their Architectural Review Board. (The ARB helps maintain a high level of design in the city’s new buildings.)

The city is consolidating job positions and departments and moving some tasks around. For example, the police will take on some responsibilities previously handled by the Department of Planning and Community Development.

When it comes to possibly cutting salaries rather than jobs, Dilg says, “Salary cuts do not help address where we are as a city. Our revenue decreases are too deep for that solution.”

Messaging will also be cut back. The city has cancelled its Tuesday night City Council meeting broadcast on KCRW.

Even before COVID-19, the city was already facing huge debt. It had an estimated $448 million in unfunded pension liability. According to the Santa Monica Lookout, Santa Monica tops the list of California cities with the biggest pensions —  15 of its retirees collect more than $200,000 each.

Some city insiders wonder if the pandemic has enabled the city to make politically unpalatable cuts that it otherwise wouldn’t make. Dilg tells KCRW that the city did not take advantage of COVID-19 in this restructuring. She adds that they still plan to pay down that unfunded pension liability, but on a slower timetable.

In an ironic twist, later this month, the city is set to open its City Services Building, which cost $75 million to build. Designed by Frederick Fisher and Partners, it’s meant to be environmentally friendly, with waterless/composting toilets. 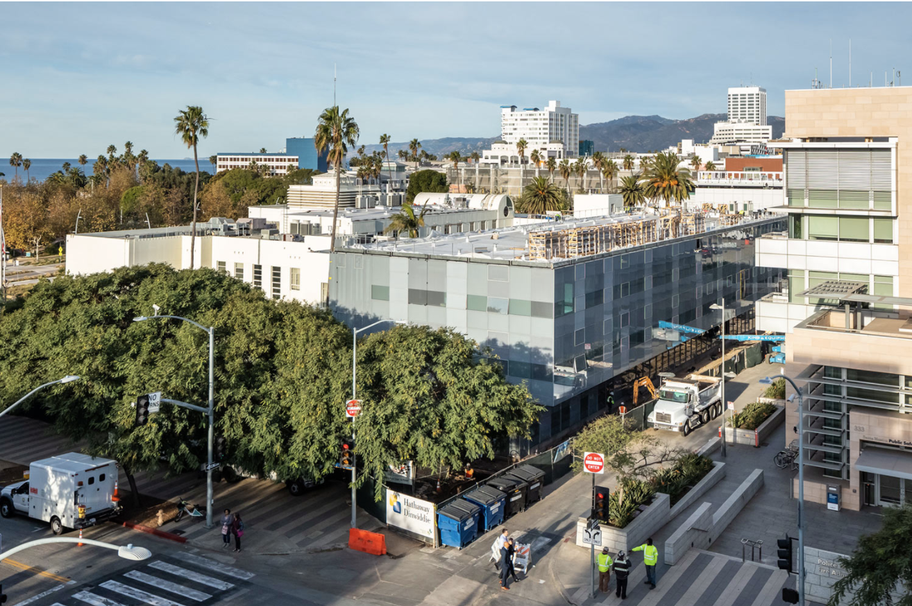 The City Services Building in Santa Monica is a costly but ambitious display of commitment to sustainable design. It’s designed by Fred Fisher and Partners, and engineered by Burohappold. Image courtesy of burohappold.com.

Santa Monica residents are up in arms about the drastic cuts, which were first floated in April. In the uproar that followed, City Manager Rick Cole agreed to resign. City staff and council members have received thousands of emails.

Some residents argue that the city has been overspending for years, and it’s time for a reset. But there is no consensus on what programs should be axed.

A bigger long-term question is about the fundamentals of Santa Monica’s economy. COVID-19 has exposed the underlying weakness of tourism-based economies, according to Wouter Vanstiphout, a professor of “design as politics” at the Technical University of Delft.

While some services and jobs may be restored as revenue returns, Santa Monica is going back to basics for now.

UPDATE: May 6, 2020: Santa Monica City Council approved the austerity plan on May 5, which eliminates up to 247 full-time employees. Another 126 employees are expected to receive buyouts. That’s on top of 150 part-time workers who have already been let go.

The City Council approved the layoffs 6-1, with one council member asking that city staff first do an analysis of the salaries and demographics of laid-off employees. Interim City Manager Lane Dilg says the cuts have been “nothing short of excruciating." But she says they are necessary to ensure a “sustainable future for our city.”

It’s possible that some jobs could be saved if employee unions approve pay cuts.

UPDATE: May 7, 2020: Constance Farrell of the City of Santa Monica tells KCRW, "By voting 6-1 on layoffs, that is the $86M. The budget is set for adoption June 23 which will reflect the restructured, smaller organization and will meet the budget gap."