On the first Wednesday of each month, hundreds of students line up at Santa Barbara City College for free food. That’s a sign of how expensive college has gotten. By the time students pay for tuition, books, and housing, many find they don’t have money left to buy something to eat.

According to the College Board, the cost of attending college has risen steadily since 1971. The average cost of tuition and fees for the 2017-18 school year was more than $34,000 for a private college and almost $10,000 for a public college.

Many students now graduate with tons of tuition debt. To add to the pressure, there’s the high cost of housing. In Santa Barbara, a studio can run close to $2200/month.

Then students are left with so little money that some are forced to skip meals. 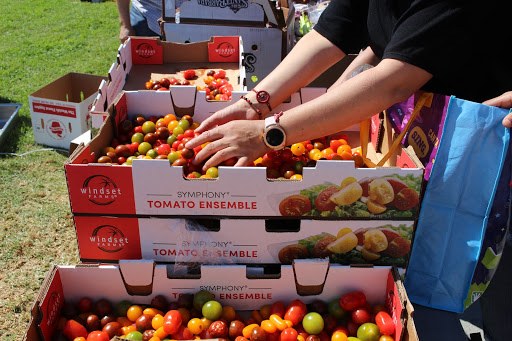 Students at SBCC saw food bank donations increase from 119,00 pounds to 183,000 pounds this year. That’s nearly a 54% increase compared to the year before. Photo by Kathryn Barnes/KCRW

Lauren Coriano, a first-year student at SBCC, relies on the food bank to minimize meal costs and supplement her weekly trips to the grocery store.

However, other students may have stronger motivations to line up. Carl Banks has been living out of his van for six months. He says, “I'm homeless and I have to compete with younger people who show up on their iPhones with their AirPods and a box of food that they just got from the cafeteria. Maybe they paid $20 for a hot meal there, and they're coming down to the pantry just to get more stuff… It's sometimes frustrating.”

Erik Talkin, CEO of the food bank, says most people who are willing to stand in line for free food need it. “It's not a kind of social activity or something that makes you feel wonderful. So in reality, people generally do need the food.”