The rise and demise of Carpinteria’s Santa Claus Lane The story of Santa Claus Lane in Carpinteria starts in typical California fashion -- with an orange juice stand.

Pat and June McKeon bought the business in 1948, before Highway 101 snaked through Santa Barbara County. Instead, Californians cruised up and down Pacific Coast Highway, enjoying the end to World War II’s gas rationing.

The original owner had called the juice stand “The North Pole,” to attract hot, thirsty motorists in the summer. But the McKeons didn't think that sounded too inviting, so they changed it to “Santa Claus.”

“First, they just had hand stamps where they would stamp the kids’ hands with a picture of Santa Claus. But by 1950, they had expanded and had several buildings,” said Roxanne Lapidus, who has lived in Carpinteria her whole life.

She remembers watching as this spot became a roadside attraction for families traveling through the area. 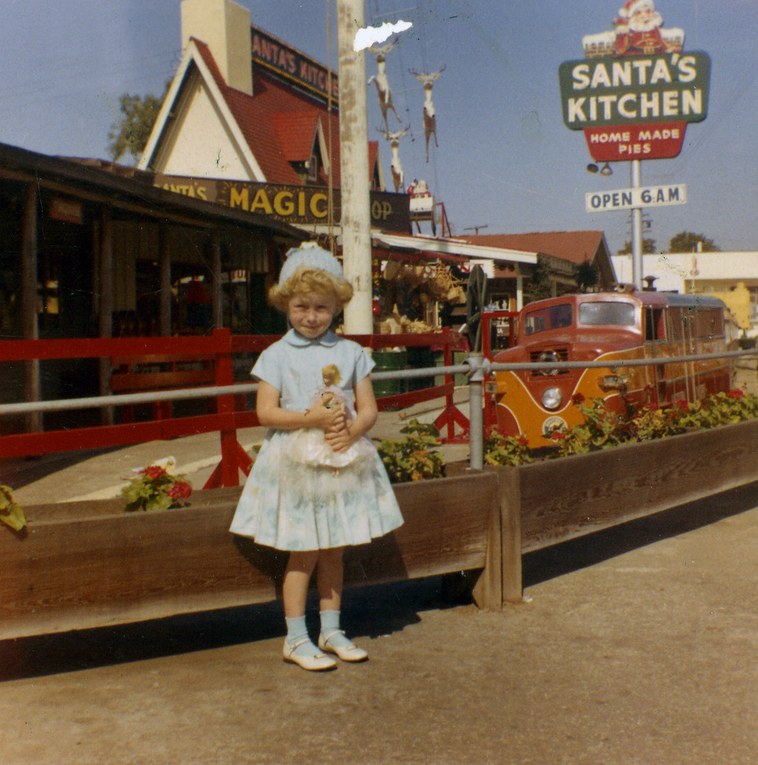 A gleaming miniature Southern Pacific Daylight locomotive making the rounds at Santa Claus Lane in the 1950s. Courtesy of the Carpinteria Valley Museum of History 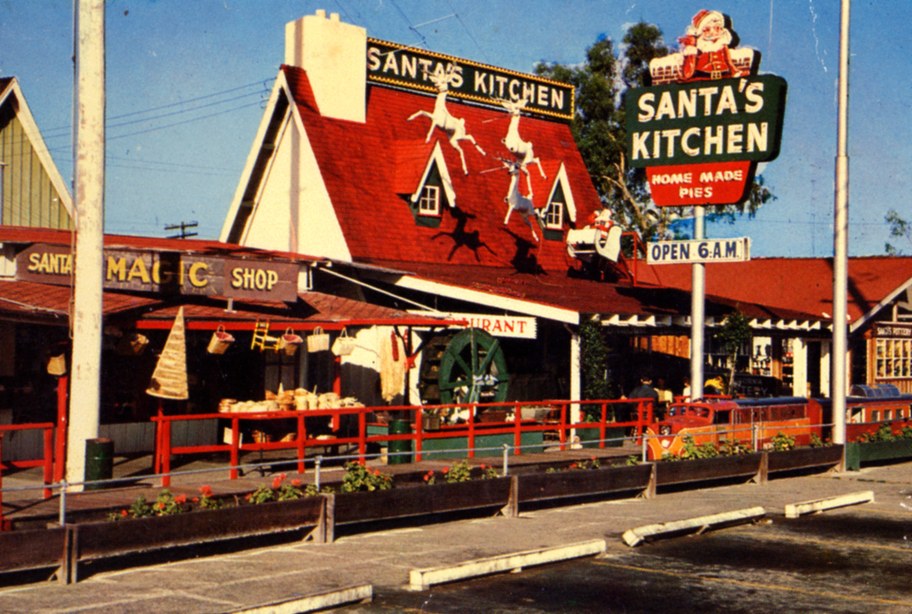 This early postcard shows the wishing-well water wheel, which powered the overhead reindeer and sleigh taking flight from the rooftop of Santa’s Kitchen. Courtesy of the Carpinteria Valley Museum of History

“For a while, there was a zoo,” said Lapidus. “But that folded after the monkeys escaped and went across the freeway and got into people's avocado trees.”

The business owners opened a post office so people could postmark their holiday cards from Santa Claus, California.

Above it all, literally, was the man himself. A Santa Barbara sign maker asked the McKeons if he could build a giant Santa Claus on top of their juice and date shake shop.

“When you rode the school bus, you could watch the progress. When it was done, it was 18 feet high,” said Lapidus. 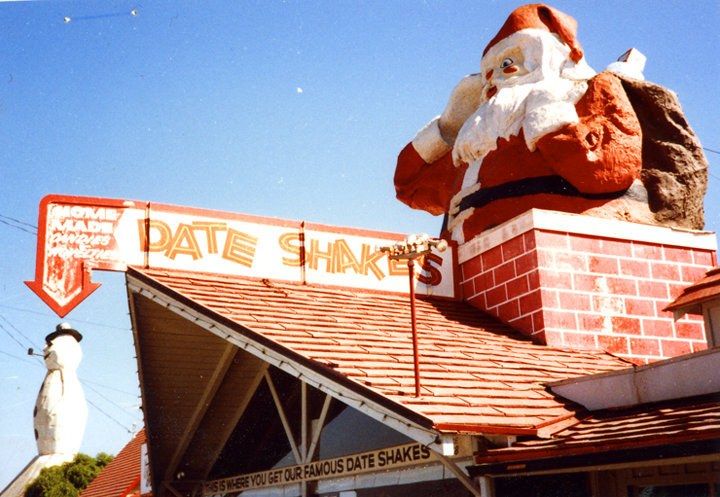 The Santa Claus was a landmark. To kids, he was magical.

But Southern California was changing in the 1950s.

The newly built Highway 101 sent families zipping by, and roadside attractions could no longer compete with theme parks like Disneyland. Businesses began to falter and the Christmas theme began to wear out, says Lapidus. “Some people even said it was tacky.” 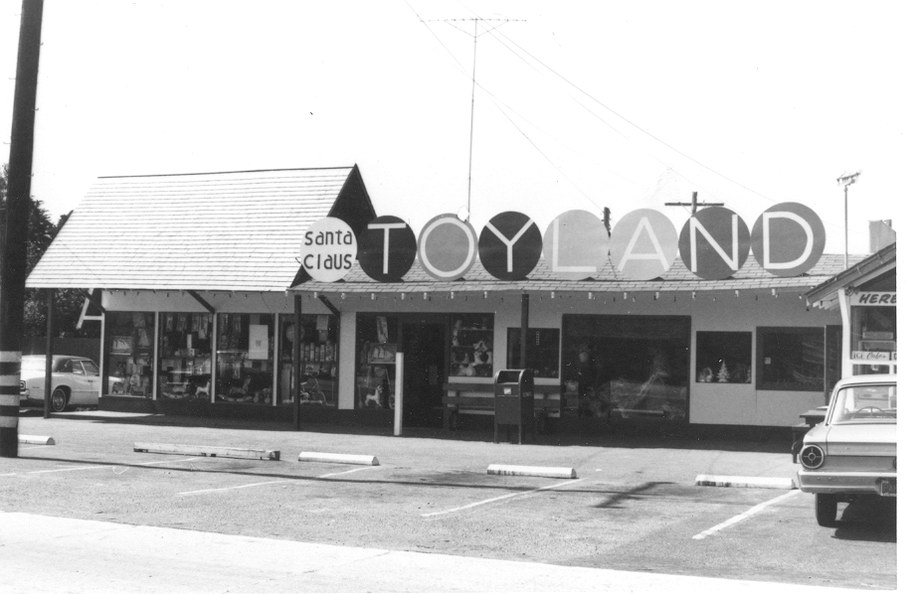 Some days saw few visitors to the Lane, as evidenced by the empty parking lot in this snapshot from the late 1960s. Courtesy of the Carpinteria Valley Museum of History

New people with more money moved into the hills above Santa Claus Lane, and they didn’t like shabby Santa ruining their ocean views.

In 1986, new owners on the lane wanted to swap the faded Christmas theme with something more beachy.

“There was a lot of pushback,” said David Griggs, director of the Carpinteria Valley Museum of History. He was among a vocal group of residents who called for Santa to stay.

Local preservation societies got involved. For a time, Santa was designated a historical landmark. Local newspapers had a field day with headlines like “Santa Better Watch Out” and “Santa Decision on Ice.”

The controversy even made its way onto the Daily Show with Jon Stewart.

Eventually, Griggs says it was a leaky roof that did Santa in.

“All the arguments and debates became moot in 2000 when a structural engineer declared that the building Santa sat on was unsound,” he said. “He was declared an unsafe menace.”

With few options for where to put Santa, the owner of a small water company in Nyeland Acres, near Oxnard, offered to install him in a park along Highway 101, where he sits today. 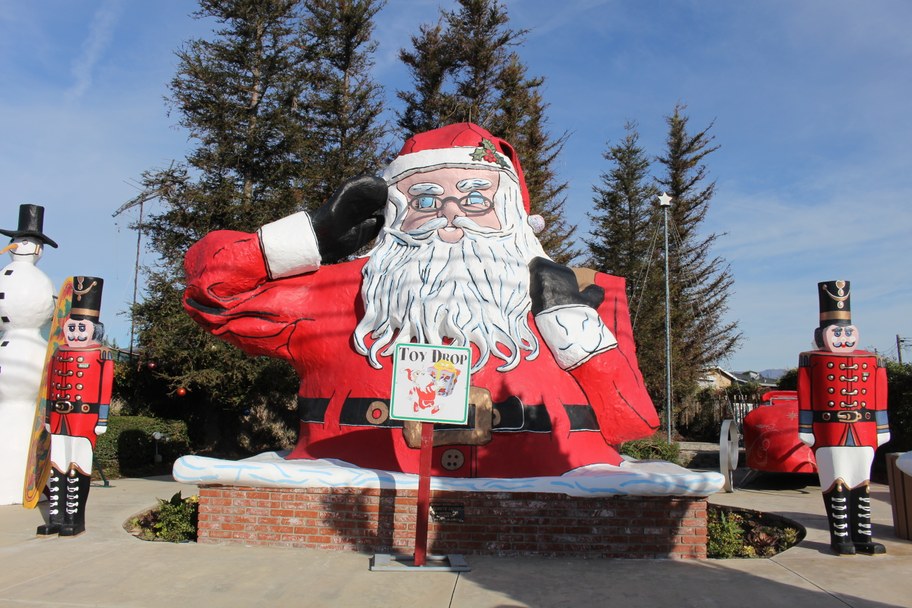 Santa Claus has risen out of a faux chimney in Nyeland Acres since it was moved from Carpinteria in 2003. Photo by Kathryn Barnes

Instead of tourists, Santa is now surrounded by a small neighborhood made up of mainly Mexican immigrants who speak Spanish and indigenous languages like Mixteco and Zapoteco.

He’s the starting point for a Santa to Sea 5k race, and hosts an annual toy drive for the community.

“He brings joy to the kids, brings them toys, and he’s close to the community,” said Alejandra Frias, who lives near Santa Claus.

Many longtime Carptineria residents like Griggs and Lapidus wish Santa could have stayed, but they’re content knowing he has a new home where he’s well loved.