A home destroyed in a debris flow on January 9, 2018. Photo credit: Kathryn Barnes/KCRW

That’s according to emergency leaders at a recent community meeting in Montecito.

“We’re looking at an average of about 80% cover in the upper watershed, probably 90% down below,” says Kevin Cooper from the Montecito Fire Protection District, who's been tracking the vegetation growth in the burn scar for the past two years. “So that’ll go a long way to slow down the possibility of a debris flow.”

The more plants grow and root into the ground, the more stable that ground becomes.

“We’re past the highest risk, but not quite at no risk because our community has such a long history of flooding. We’re right in the middle of that three to five year risk period,” says Taylor.

Last year, 1,500 properties were at risk from flooding and debris flows. This year, about 500 properties are at risk, according to the county’s updated map. 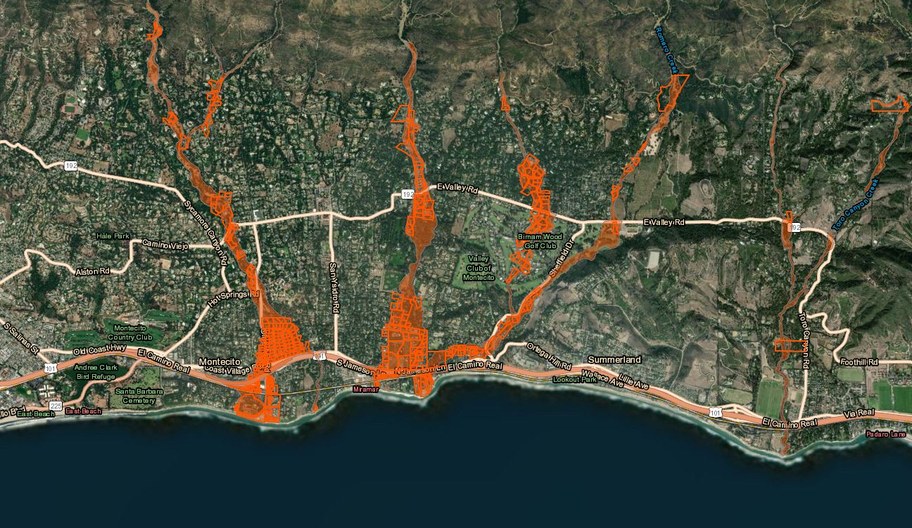 Areas in red are at risk during large storms this winter. Courtesy of Santa Barbara County.

On January 9, 2018, heavy rains triggered a debris flow in the Thomas Fire burn scar, killing 23 people and destroying about 100 homes.

“When I look at that house right next to us, it still has a mud line three or four feet up the sides of the exterior walls,” he says. “A horrific event occurred. A debris flow that was really initiated by an intense rainstorm on a burned watershed.” 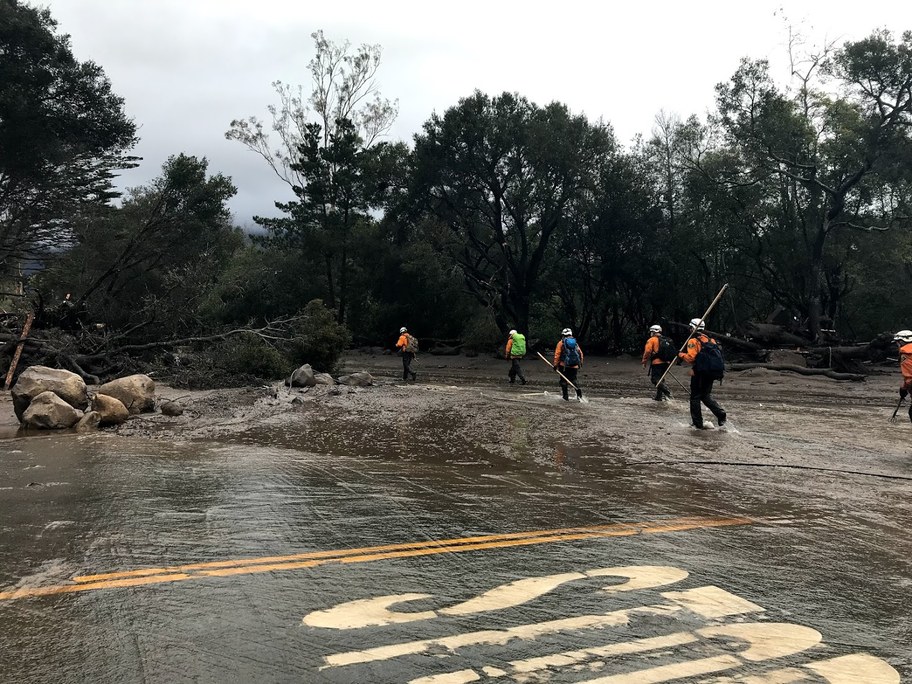 A search and rescue team sets out to look for people the morning after the debris flow in Montecito on January 9, 2018. Photo credit: Kathryn Barnes

During the January 9 debris flow, mud and debris inundated local basins built to protect the homes and infrastructure below.

Last year’s winter storms brought some material, but county crews were able to handle it.

“This year, we expect a totally different character. In the storms that we've had so far, there's been very little coming down into the basins.”

The county is pursuing millions of dollars from FEMA to construct two new debris basins and enhance the existing ones.

Residents living in high risk zones were ordered to evacuate several times last winter. This winter, emergency officials say evacuations will likely take place if there are several big storm systems forecasted in a row that could lead to high saturation levels.