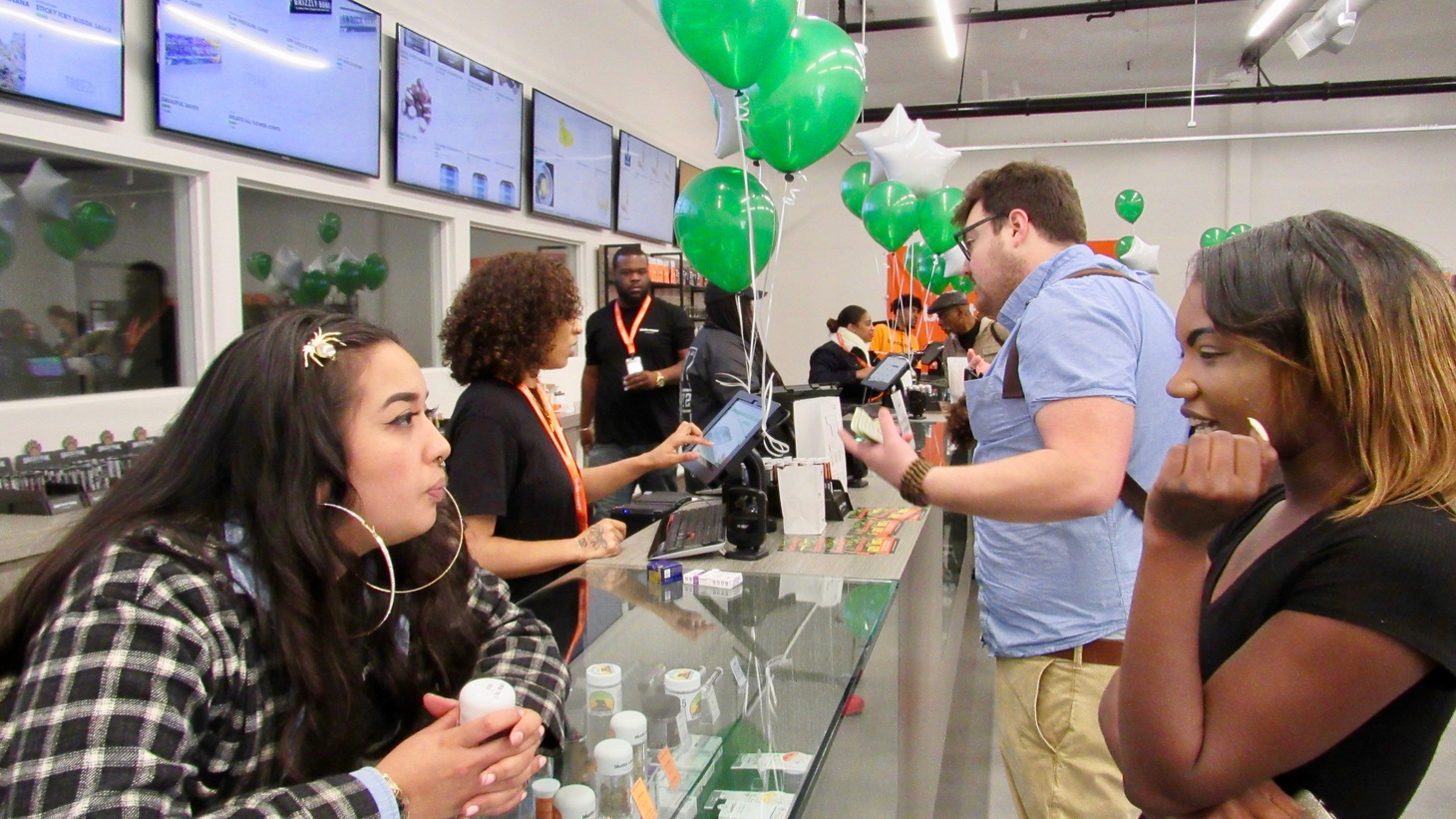 A “budtender” speaks to a customer at the grand opening of the Blunts and Moore dispensary in Oakland, CA. Photo by David Downs/Leafly.

As more states legalize marijuana, job growth in the field has exploded. More than 428,059 full-time cannabis jobs now exist, according to the 2022 Leafly Jobs Report. Leafly Senior Editor David Downs explains it’s another year of growth for the $25 billion cannabis industry in the United States.

David Downs: It’s torrid because we keep adding new legalization states to the United States. This jobs report looks at 38 states — 11 of which have adult-use sales. You can think of these cannabis jobs on the legal side like a wave that’s sweeping across the nation. … There's a 33% increase in jobs year over year. That’s 280 jobs a day. And this is a fifth year straight that those gains have been 27% or more.

What types of jobs are there in the legal weed market?

Our equation turns the state's annual retail sales revenue into a job equivalent. That’s everything from a farmer in the field to the professionals in offices like lawyers and accountants who are participating in the industry now more than ever.

We get those revenue numbers for each state from the California Department of Tax and Fee Administration, and we turn those into those jobs numbers.

Describe the scale of cannabis jobs in California.

California did $5.1 billion in retail sales in 2021. That worked out to 83,607 jobs with the addition of 21,000 jobs last year. It's only up 15% in 2021 compared to 64% in 2020. These are mind-boggling numbers, but they speak to this massive state switching over from its decades-old illicit industry to it's now 5-year-old legal retail and adult use industry.

Why did California’s cannabis job growth slow down in 2021 compared to 2020?

It cooled in 2021, and the tax revenue showed that too.

California isn't really killing its golden goose here, but it's caged it, and it has clipped its wings. High taxes like 38% in retail are an enormous red tape that can take millions of dollars in years to surmount, and retail bans in 68% of cities and counties in California are slowing down that maturation and growth of the California legal industry.

California is this big state, and it's on its own slow metabolism. From a cannabis jobs perspective, the state is still asleep. Three in four cannabis dollars spent in California are spent in the illicit market, so it's going to take a generation to move those customers over.

We’re in a golden age for the professionalization of cannabis. I'm seeing job openings for chemists, communications experts, engineering experts and genome assists.

The number of farmers is shrinking, but on the larger scale, the professional side of things is really diversifying. I would encourage anyone to bring their professional trade and skill set into the cannabis space.

Do you see the “cannatourism” industry taking off in 2022, or will other fields see bigger job gains?

The experiential cannabis tourism side of things is actually one of the tougher spots because you need a license to bring people to consume THC. For example, San Francisco's cannabis lounges got creamed over the last few years due to COVID. I think the tourism aspect is going to be a slow roll.

What we're going to need more of is armies of this traditional stuff you see that is hot in the economy. We need tons of engineers. We need accountants. We need high [school] teachers and professors that study cannabis at colleges. Think about those high-skill, high-education jobs versus the inverse in the prohibition era where the job qualification was just having a pretty high tolerance for risk.