North Hollywood tiki bar Tonga Hut gears up for reopening, with help of its dedicated community Dedicated Tonga Hut customers set up the netted roofing inside the lanai. Photo by Danielle Chiriguayo/KCRW.

Tonga Hut co-owner Kevin Murphy took to Facebook in April, calling for a construction crew to build a pandemic-safe lanai. He expected a handful of volunteers to help. But like much of the last year, the unexpected happened. More than two dozen dedicated tiki heads signed up to help within the first few hours.

Tonga Hut sits on a busy patch of Victory Boulevard, having never truly shut its doors in its 63-year history. Murphy says the 14 months of pandemic closure is the longest stretch the bar’s ever been closed. Fortunately, the bar is planning for a grand reopening next week. He credits that to the bar’s pre-pandemic success.

“Before the pandemic, the economy was ripping. We put the brakes on what was going to be a record year for us. And I don't feel like I lost that momentum. I feel like I went in for a pitstop, but the race is still going strong,” Murphy says. “We're still one of the strong contenders. We got new tires on. We got the oil change. And we're just going to shoot out and catch back up and start the race again.” 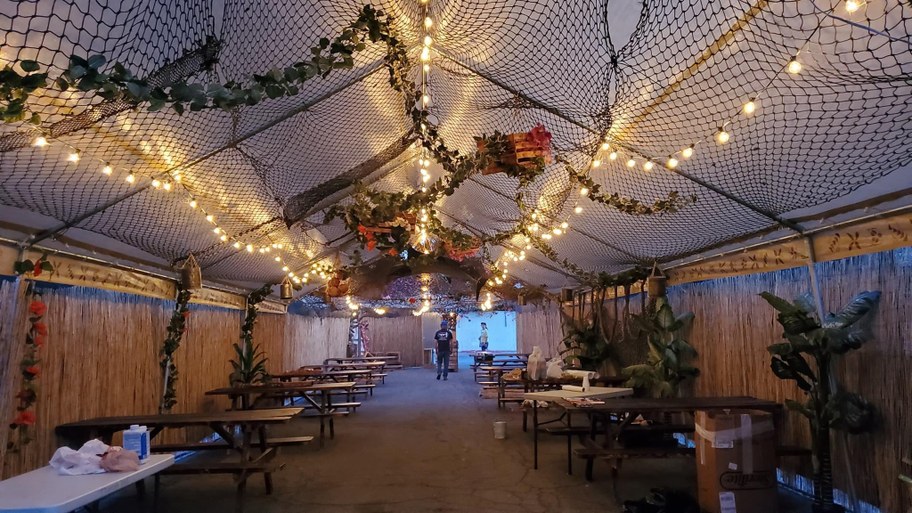 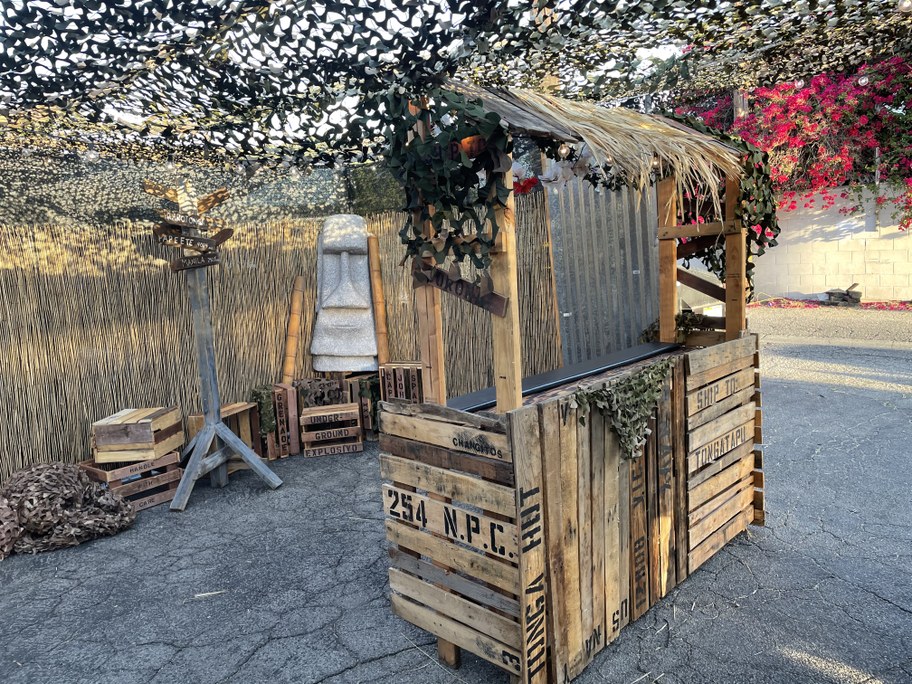 A host will welcome guests at the lanai’s entrance. Photo courtesy Marie King

Now the Victory Boulevard mainstay is back with a 2,000 square foot outdoor space. It’s a spot that dozens of patrons flocked to over the last week and helped build a tropical getaway.

They set up canopies and bamboo fencing, laid string lights, and pitched a netted roof. It’s rife with classic polynesian pop culture bric-a-brac, such as potted palms, a moai, and a six-foot vintage swordfish. Some items, like the swordfish, were donated by volunteers, while others were recycled from the bar’s sponsored room at the 2018 Tiki Oasis, the longest running tiki festival.

Others took blowtorches to patio tables to help weatherize wood through an 18th century Japanese technique called “shou sugi ban.” After charring the tables, folks brushed off charred remains, and oiled down the surfaces to help seal them. 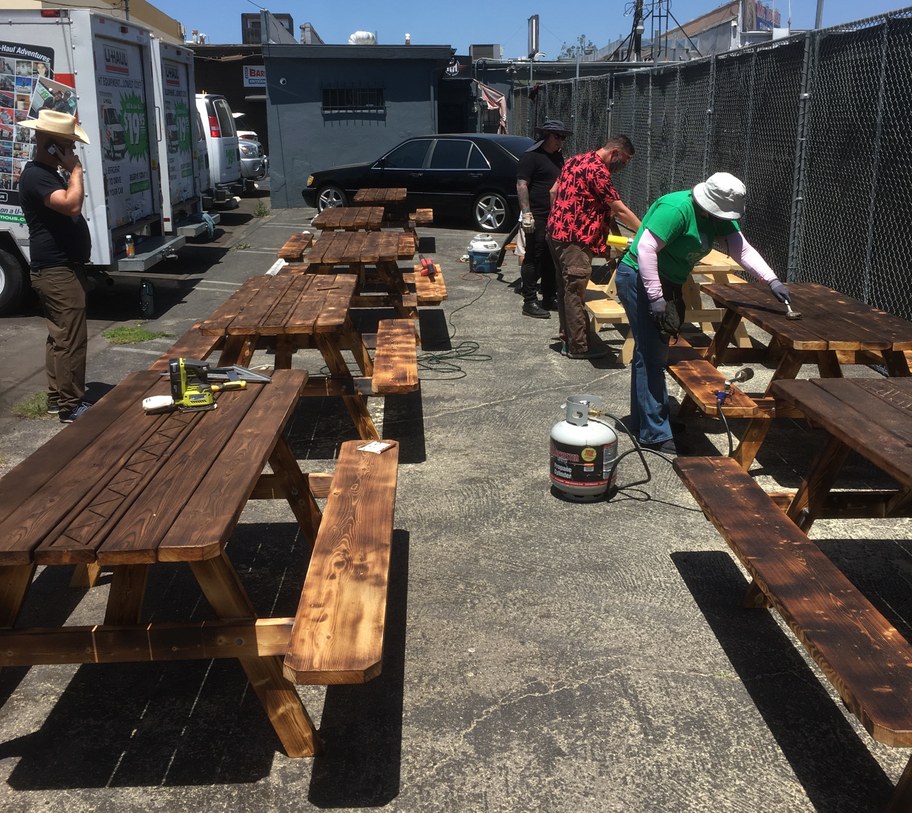 “They're out here building a bar, but they've all done this at home,” Murphy says. “These guys have now built out the most fabulous home bars with 12 months of being in quarantine. They've built these things that look better than Disney.”

For 55-year-old Richard David, helping build the space was a no-brainer.

“I decided to come out here and be part of history — part of the tiki history and part of San Fernando Valley history. We don’t have that many places here that are still around that have this real home feeling that isn't a corporation,” he says. 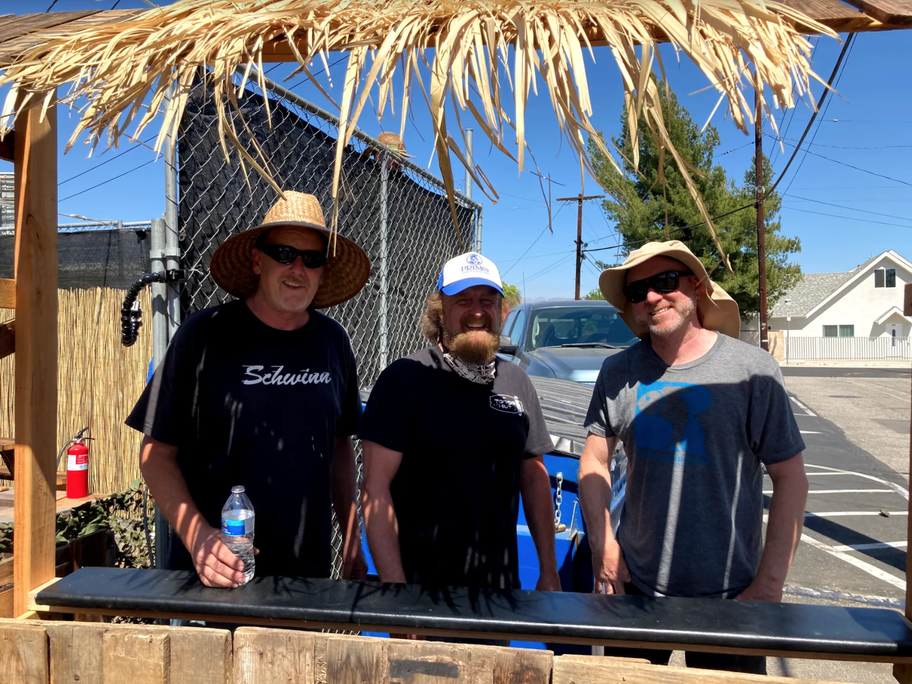 Arriving bright and early on the first day of construction, David helped wherever he could: pressure washing the outdoor space, setting up fencing, and pitching the canopy and hanging netting.

“It’s evolving from a back valley parking lot into a little oasis ... in San Fernando Valley. It's going to be shaded, it’s going to be open, and we can get back to drinking and having fun.”

An LA native, David didn’t visit Tonga Hut until 2016 — he was a regular at Tiki Ti before. But after his first visit, he vibed with the Valley haunt almost immediately. Today, he’s a member of an exclusive club of patrons called the Loyal Order of the Drooling Bastard. In order to make the cut, prospective bastards must drink through the Grog Log: a list of 78 cocktails compiled by Tiki Historian Jeff “Beachbum” Berry. They have a year to complete it. 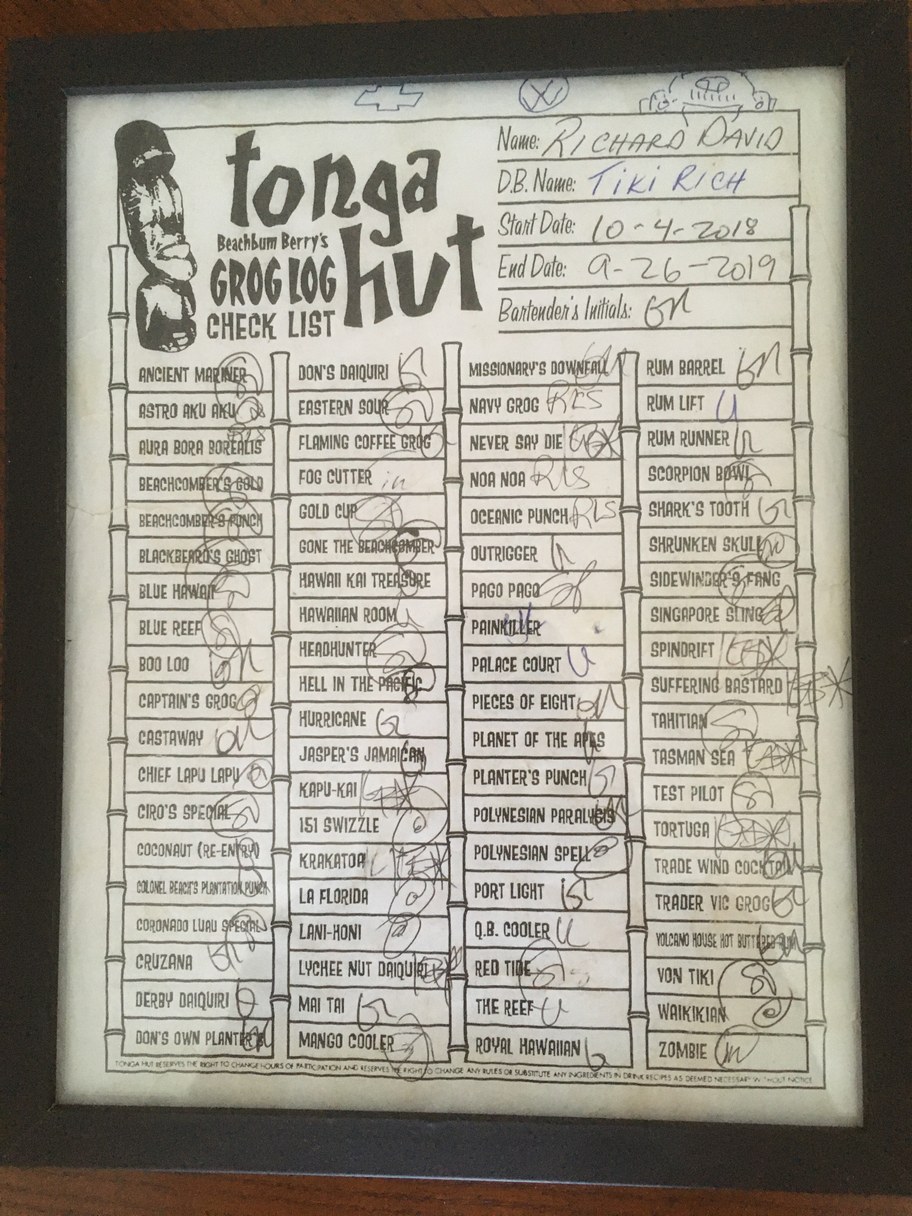 In 2018, Richard David joined the Loyal Order of the Drooling Bastard. He framed and hung his Grog Log. Photo courtesy of Richard David.

For Ladies Who Tiki founder Michelle Perez, helping build the lanai felt like coming home to support the family. She first grabbed a drink at Tonga Hut in 2013. Over the years, she became a Sunday regular.

“It really just made sense to lend a helping hand. If any of the local tiki bars needed help, I'd be there. No questions asked. I want to see small businesses around Los Angeles come back to life, whether they've been around 60-plus years or not.” 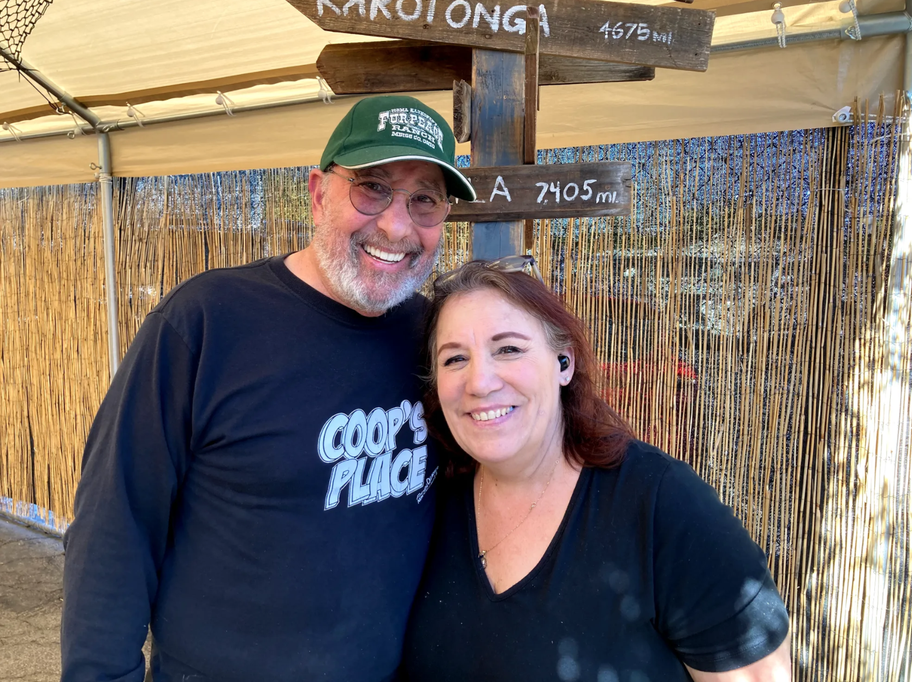 Couple Christal Williams and Peter Friedkin traveled from Orange County to help construct. Friedkin grew up down the street from Tonga Hut, and the bar is a reminder of his childhood.

“This place is nice because nothing else is on this stretch of Victory [Boulevard]. Everything else that was here back then is now gone. The bakery across the street where my mom always used to shop at — they're long gone. A little market that was across the street, and a neighbor had the butcher shop in there, that's gone too,” Friedkin says. “Everything changes, everything grows, things evolve. But it's just nice that some places still have remained. This is an old Valley institution.”

As bars and restaurants continue to reopen, the industry has been hit with staffing shortages. But according to Marie King, Tonga Hut’s general manager, all staff will be returning following the bar’s reopening.

“I think that is a tribute to how much of a family we are here, that all of our bartenders are coming back. Because so many bars in LA are just struggling to staff right now,” she says. “If you're in this business, it's part of your DNA. And to feel that creative energy that flows through you, when you're making these drinks, it's very powerful. And we've all missed that. We've also missed the camaraderie of being with each other.“

But even as Tonga Hut prepares for its grand reopening, the bar does have some surprises up its sleeves. That includes an all new grog log for members of the Loyal Order of the Drooling Bastard.

“Pre-pandemic, a lot of these bastards — as we call them fondly — have wanted a second part of this challenge because people like coming in sometimes and just being told what to drink,” she says. “If you have finished the Grog Log and you are a drooling bastard, then we are now going to do Jeff Berry’s second published book ‘Intoxica.’ So if you have finished, you will be now an intoxicated bastard.”

As for those who didn’t finish the first grog log in 2020? King says they’ll have an extra six months to complete the original 78-drink grog log. Loggers will also have the chance to drink an extra log entry when they visit. That’s because guests will be able to take a drink to-go after a Tonga Hut visit.

King says the outpouring of support from the bar’s community is a testament to how close Angelenos still hold Tonga Hut to their hearts.

“I mean, how is it that just because you're friends of a bar, you're going to show up and put your blood, sweat and tears into building something? It's amazing, but it also gives them ownership. It also gives our regulars a feeling like ‘I did this. I'm now even more part of something.’”

Murphy adds, “We could build anything with this crew and it'd be amazing. But maybe that's what happens when you keep tiki people sober for 12 months,” he says. “They're all eager to come use it too. They've got a stake in this now. It's their bar, it's not really my bar, and they'll come back, and they'll use it.”

Tonga Hut’s grand reopening is set for Friday, May 14, and welcomes both walk-up guests and reservations. Each party will have a 90-minute time limit.