It’s been just over a year since Los Angeles legalized commercial cannabis, and while sales of the drug are in full swing, some city efforts to regulate the industry have been slow to get up-and-running.

Take the city’s “social equity program,” an effort to help minority communities hardest hit by the war on drugs succeed in the legal industry. Eligibility for the program is determined by things like whether or not the applicant lives in a certain neighborhood, is classified as low-income and/or have been prosecuted for marijuana-related crimes. To assist these applicants in getting up-and-running, L.A.’s social equity program facilitates partnerships between them and more-established businesses, who get to cut to the front of the line for city licensing in exchange for providing financial support and mentorship.

That’s where Gabriel Guzman and Michael Hurt come in.

“Gabe and I talk literally every day to make moves, so to speak,” said Hurt. “To get things lined up so when the city does give us that license, we’re getting into shops.”

Hurt is the Chief Executive Officer of an edibles company called Supreme Organics. He and Guzman are both applying for cannabis manufacturing and distribution licenses with the help of the social equity program. Hurt has helped bankroll Guzman, worked with him to develop recipes and marketing campaigns, and provided access to his state-of-the-art space. In exchange, he gets to cash in on a shorter wait time for a permit.

Hurt has big plans for his own company - in addition to the one he’s helping Guzman get up-and-running.

“Kind of like how California produces over 80 percent of the produce consumed in North America, and we export a lot too, I think it’ll be the same for cannabis,” he said.

Like Hurt, Guzman is no newbie to the industry. He’s spent the 15 years working in various capacities as a cannabis advocate, delivery service operator and medical marijuana license holder. He’s also experienced the dark side of cannabis, having been racially profiled, handcuffed, and detained by law enforcement numerous times.

This experience isn’t an anomaly, as experts say that while the rate of cannabis consumption between blacks, whites and Latinos is about the same across the country, enforcement rates are, on average, three times as high for blacks and Latinos.

“There was a lot of times where we were in the wrong place at the wrong time and the police showed up to bust that particular dispensary,” said Guzman. “We were all held up asked to lay on the floor. We were all let go, but just having that experience in general was not only traumatizing but it’s just a struggle - and those are the struggles that I’ll never forget.”

One day, while sitting in his car outside a park in Carson, Guzman was approached by a cop, questioned and arrested for possession. Now, Guzman is able to use this incident to his advantage, because L.A.’s social equity program prioritizes people who’ve been arrested for cannabis. Now, he’s trying to launch a company that he likens to a type of “Herbalife brand,” which will sell high-end edibles, topicals, concentrates and more, all targeted at the latino community.

With Hurt’s help, Guzman’s been able to gather start-up capital, access to operating space, and a bit of guidance on how to get a manufacturing company up-and-running. For Hurt, participating in the social equity program means he doesn’t have to wait until the final phase of licensing to apply for a permit - a move that could risk his chances of getting a license at all. That’s because of the sheer number of applicants and the range of restrictions on businesses, from zoning requirements to limits on the density of cannabis operations.

Hurt’s been in the business since 2002, when he got out of the army and decided to start growing marijuana. He started extremely small.

“I started below ‘mom and pop.’ I started at like homeless, literally not kidding, like living in my van before #vanlife was cool,” said Hurt. “It was ugly. I lived in there for over a year with my cat.”

Hurt operated a delivery service out of that van, and eventually, moved into a less-mobile living situation and began experimenting with cooking edibles. He soon leveled up, hiring a chef to try and elevate his products from granola bars and baked goods, to cannabis-infused versions of your favorite childhood candies, like Reese’s and Starburst.

Now, he’s putting the finishing touches on a pharmaceutical-grade production facility in the San Fernando Valley which will be used for both his and Guzman’s companies. Located in a nondescript office park, this plant can produce gel caps, tinctures, oils, lotions and even, edibles. The whole setup is pristine and has the capacity to push out products 24/7. Hurt sees an opportunity to supplement income by also doing contract manufacturing for other businesses.

Inside the cavernous manufacturing space, some machinery is still in crates but the pieces that are on the floor are shiny, high-tech and look a lot like what you’d find in a brewery. All of the machinery is designed for mass production - like the Twinkle Machine. 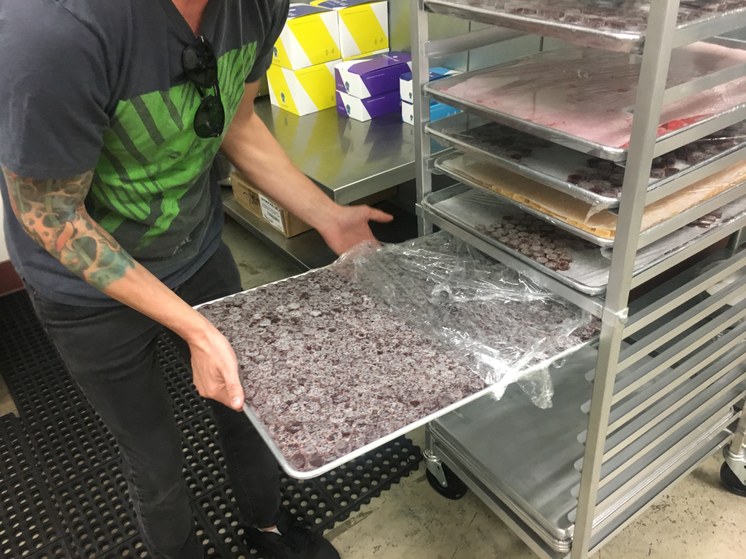 Michael Hurt pulls out a tray of cannabis-infused gummies at his manufacturing space south of Downtown LA. Photo by Hayley Fox

“Basically it’s a gummy machine that will produce a million pieces every 10-hour shift,” said Hurt

Hurt says one machine can produce several hundred thousand vape cartridges in a day, and another, about 3 million softgels. Then there’s an automated pump station, that can fill bottles with an exact, predetermined amount of liquid.

Guzman and Hurt formally began the application process with the city of LA in August, and have had to submit numerous rounds of paperwork, pay application fees, get fingerprinted, identify their relationship and more. Hurt’s now in the process of courting an investor who can help support the large-scale factory and prepare for what Hurt sees as the inevitable federal legalization of cannabis.

“Long term strategy in building that facility is the national and ultimately international market,” he said.

Meanwhile, Guzman is also thinking strategically. He wants to create a bigger market for legal cannabis among other Latinos. He and his wife Fanny founded a non-profit called Latinos for Cannabis and they speak to groups about the research behind the drug’s medicinal uses and more.

When talking to older Latinos, Guzman says he steers clears of phrases like “smoking weed” and talks more about medicinal topicals. He also likes to remind older generations of holistic traditions practiced within the culture. He says things like: “Hey you know, when you’re taking medicine, you’re taking ruda, or whatever it is you’re taking, you’re taking it for its medicinal benefits it’s the same thing with cannabis.”

Now, after six months of waiting and working with the city to receive his temporary approval, Guzman is  just a few weeks away from getting his company officially up-and-running. He could be selling his products as early as February.