Left, Right and Center Presents: Diaries of a Divided Nation 2020 Diaries of a Divided Nation: 2020 is a people’s history of the United States recorded in real time.

Over the past year, a team of audio journalists have documented the lives of seven ordinary people with different views, living in different places, and with different stakes in politics. Each participant has recorded their thoughts and experiences as the extraordinary events of 2020 have unfolded. These are their stories. 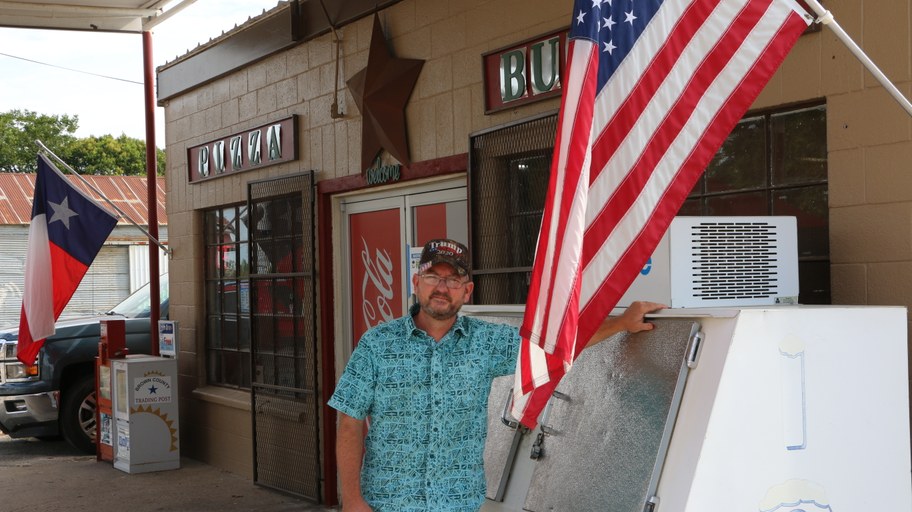 Sonny Garman is a white proprietor of a small convenience store in rural Texas.

“If I had to pick one thing for society to be better it’s just raising children. Raise them the right way, just simple, ‘Yes ma'am, no ma'am,’ or whatever. Teaching your kids to be hard working. Helping your neighbor, and being kind to others. And I think that that old fashioned respect is gone away."

“[The impeachment is] wasting a ton of money for what? What are we going to get out of it? It won't help any orphans, won't help any poor families and everything else that are struggling. You know, when we grew up, there were times we didn't have hardly anything to eat. We didn't have a toilet, running water, electricity and everything else, had to listen to our Mom cry on Christmas ‘cause we didn't have electricity and she didn't have any Christmas presents for us. And all I wanted was for her to not cry. That's all I wanted. And then to blow millions of dollars because they're up there bickering who's going to be in charge, Democrat or Republican? It’s nonsense."

“Are we gonna have to pick up like our forefathers did and grab a dadgum gun and say look: this is our country, this [expletive]’s gonna stop? If they keep doing the things that they're doing, they're going to push a civil war. They're gonna make it happen.” 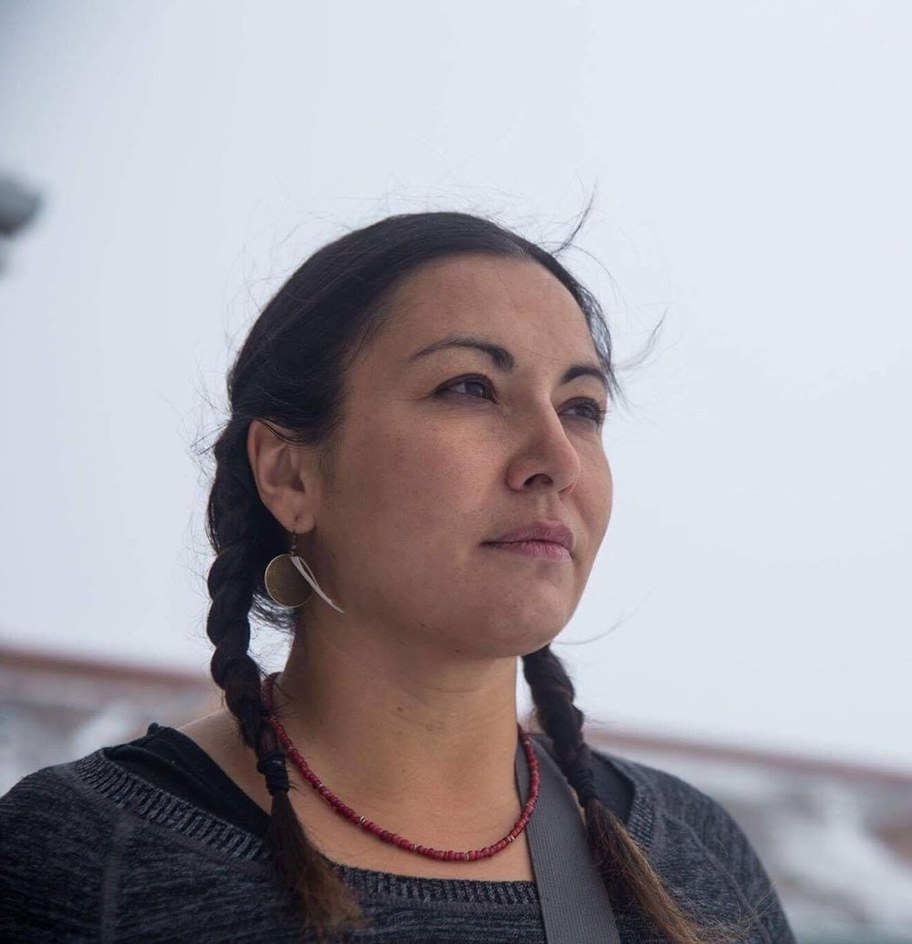 Christine Nobiss is an organizer for Indigenous justice and sovereignty and is Plains Cree/Saulteaux of the George Gordon First Nation.

“Being born Native is a political act. You're born having to defend yourself from some pretty hostile racism. We're still in a genocide. We're still being colonized. We're still fighting for our lives. Some of our tribal nations have murder rates that are ten times higher than the national average. I just want people to realize we face this on a daily basis."

“I don't believe in the Democrats or the Republicans. I don't think either of them can make the change that is required."

“The white hetero patriarchy is dying, and when you are in your death throes, that's when you fight the hardest. That's why Trump is in power.”

Christoper Briggs is a traditionalist Roman Catholic with nine children.

“My whole adult life, from the time I discovered The National Review at age 14 up through my college experience and beyond, into my professional career, I can't tell you how many times I've been called a fascist, a bigot, a racist homophobe and a Nazi. For holding views that are none of those things, that are simply within the mainstream of the American political tradition, and certainly within the Christian tradition of the West. "

“There is a kind of intensity of rhetoric coming from the Left towards members of the conservative Right that have just been ad hominem, just utterly destructive of–I mean, that's the goal is to destroy you. We finally have a candidate who's willing to kind of do the same thing back. And I find Trump refreshing in that sense. He's willing to kind of push back and call names a little bit. Is it admirable? No. But is it understandable? Yes. You know, it may be a little bit of a correcting of the balances.” 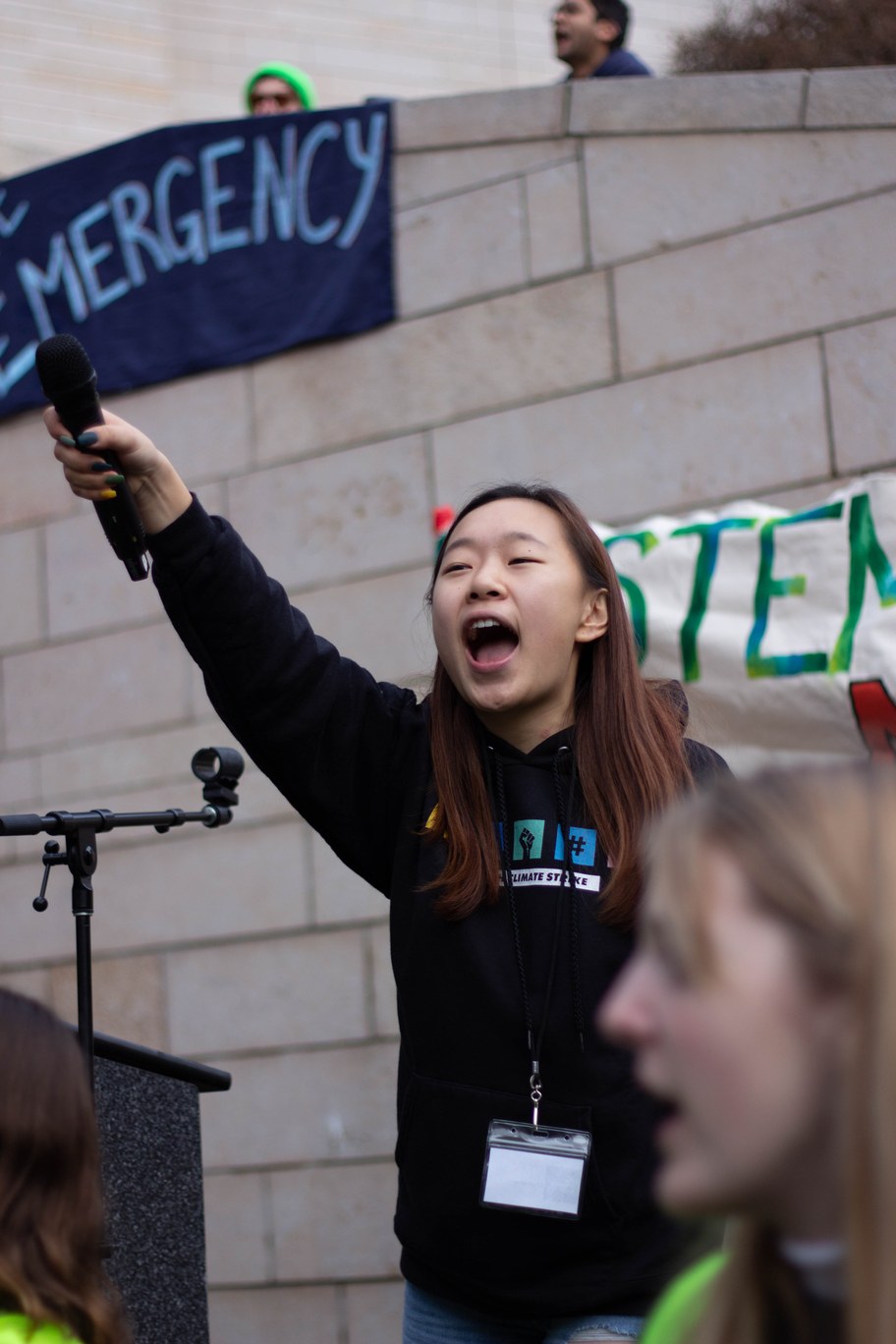 Nara Kim is the daughter of immigrants, a high school student and a youth activist.

“My parents have just urged me to focus on school and that if I wanted to get some extra cash here and there, I could just work at the restaurant that my parents own. It's a Chinese restaurant, which is funny because they're Korean. They work so much. And it just blows my mind how they manage to do everything."

“There have been protests here in Seattle. I was going every other day from like 11 to as late as I could be there at night. So I was there for like 12, 11 hours every other day with my friends."

“We've been learning a lot of protesting tactics from the Hong Kong protests. So like when cops throw teargas, put a traffic cone over it and spill water on it.  Or have umbrellas up in the front to deter mace and teargas and stuff.” 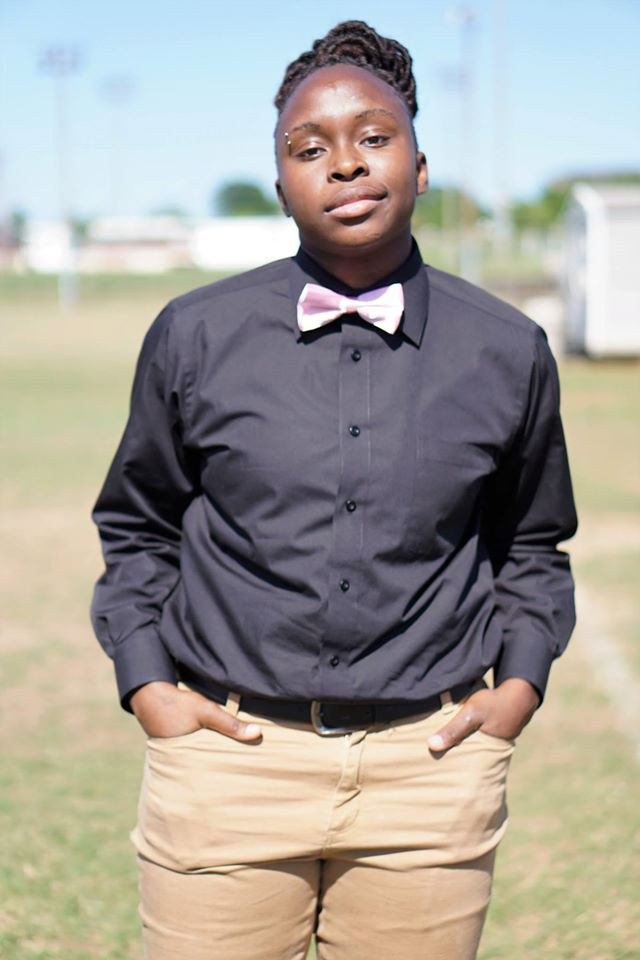 Vic Harris is a Black Queer Millennial who identifies as non-binary.

“Protests in Minneapolis. Protests in Columbus. This Black trans guy was killed."

“I hate it. I hate that this is something that has to be done. I hate that it's happening right now. We're in the middle of a pandemic. And we can't just get a breather. We can’t just be left alone. And when I say we, I mean Black people, we can't just be left alone. We have whole groups of Black people out protesting right now in the middle of a pandemic where Black people are being disproportionately affected. And I hate it. I hate that we have to do it. I hate that this is happening. AndI don't know what to do about it. Am I supposed to be saying something? Do I get in my car and go somewhere? What do I do? What do I do?” 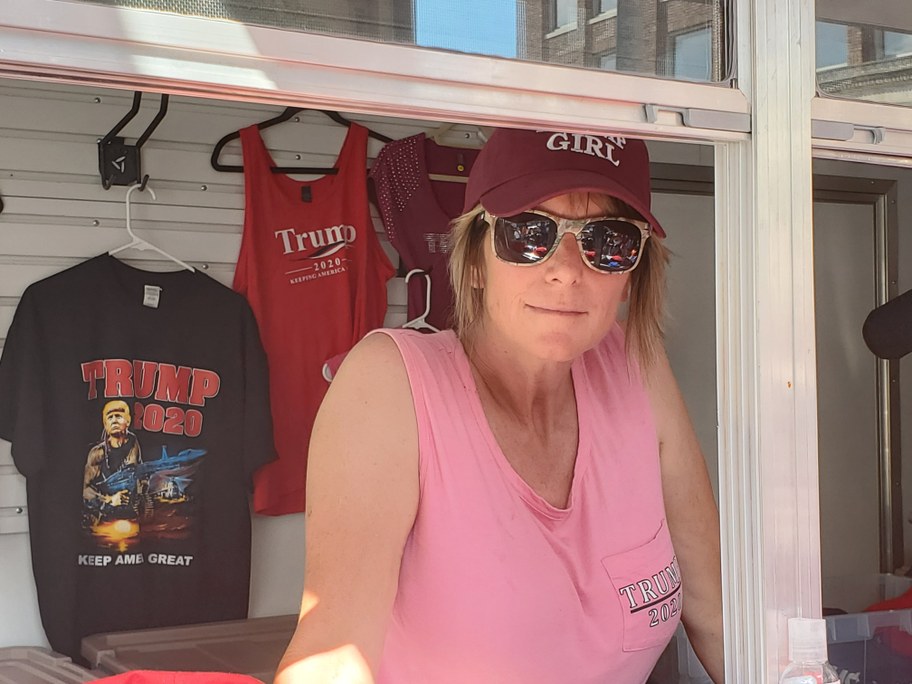 Lori Levi is an entrepreneur who sells Trump merchandise at rallies.

“If anything, the last few months of lockdowns have really put people on notice of how close we are to losing this country to socialists. We’ve just lived through it, the first experiment of it. When the government controls darn near everything, whether you can go in a restaurant, whether you can do this, whether you can get your haircut."

“I think [Covid-19] was actually a ploy to literally destroy the economy. What’s his name, Fauci, this expert is the one that's telling us, you know, 200,000 people are going to die if we don't do all this. And then the next thing you know, it's, ‘Well, maybe our numbers were a little off.’ It's like global warming. It's all a model, and it's all turned out to be seriously wrong.” 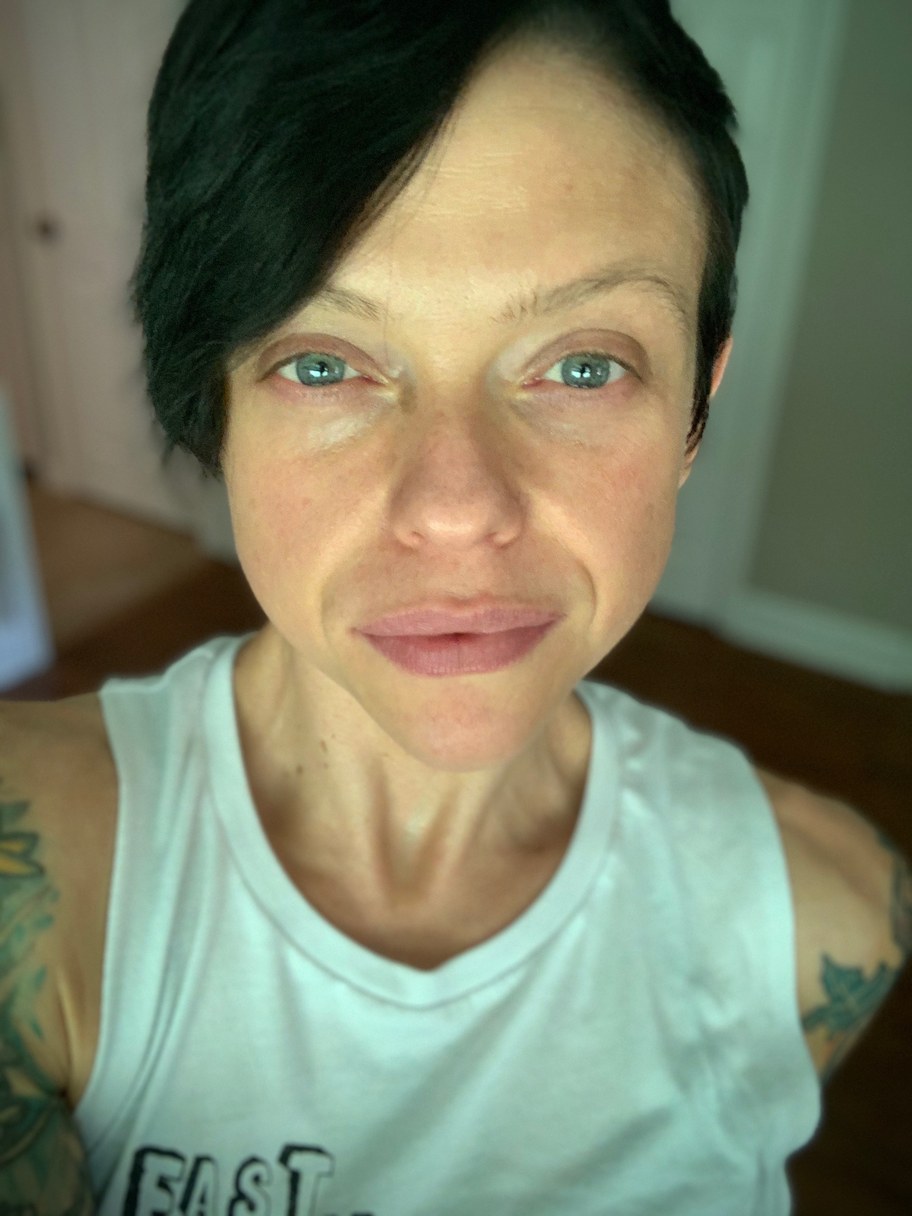 Kelli Hansel Haywood is the mother of three daughters.

“My dad is still a coal miner. I'm the first of five generations to not have worked in coal.”

“Anytime I’ve traveled, and when I lived outside of the region, I would be publically made fun of and humiliated for my accent. And for being from where I’m from. It doesn't matter that I have a master's degree, as soon as I open my mouth and they can tell I’m a hillbilly, then there's a level of disrespect there that is hard to see past, and it hurts."

“I learned from going outside of the region that various cultures are beautiful. And it takes a lot to really understand them. And we can't learn anything well – really well – from what we see on television."

“Our political system is broke, straight broke. I don't care if Biden wins, I don't care if Trump wins, it's broke. It’s gonna get really really bad before it gets better.”

The stories in this program were reported by:
Elizabeth Nakano
Max Green
John Fecile
Heather Claborn and
Jesse Dukes

The executive producer of this program was Jesse Dukes

And, of course, all the thanks in the world to Christine, Christopher, Kelli, Lori, Nara, Sonny and Vic for sharing your stories. The views they have expressed in this program are their own, and do not reflect any organizations with which they are affiliated.