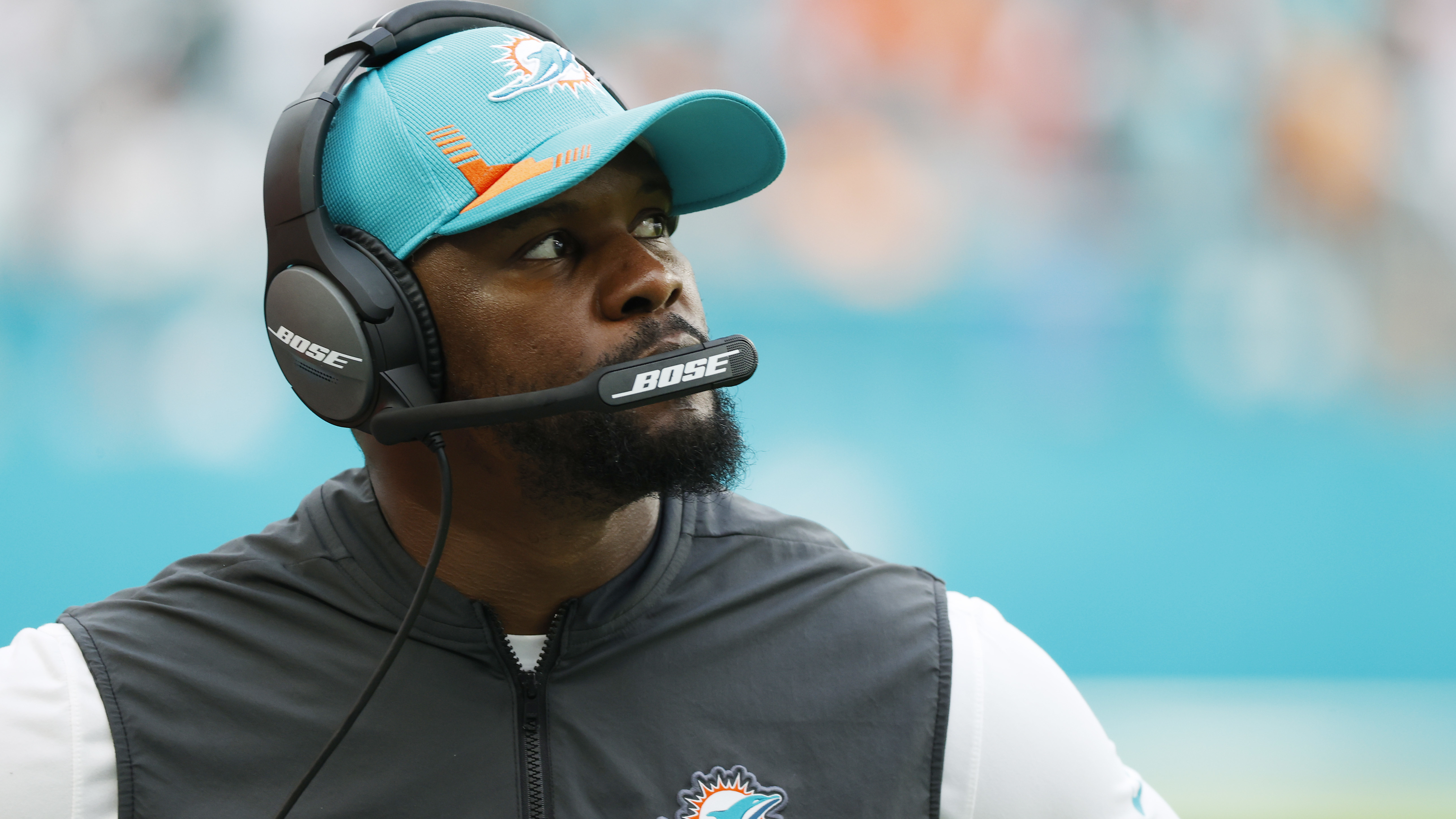 Former head coach Brian Flores of the Miami Dolphins looks on from the side line during the game against the New York Jets at Hard Rock Stadium on Dec. 19, 2021 in Miami Gardens, Fla. Photo by Cliff Hawkins - Getty Images

Brian Flores, who was fired as head coach of the Miami Dolphins in January, filed a class-action lawsuit Tuesday against the NFL and three of its teams for alleged racial discrimination. But the suit is "much bigger than coaching," he said in an interview with CBS Mornings on Wednesday.

Flores has alleged that race was at the center of his removal from the position, a problem that he says is endemic in the NFL. And despite the risks to his career — Flores has not yet secured a new coaching position — he felt a responsibility to speak out.

"I understand the risks, and yes, it was a difficult decision. I went back and forth," he said Wednesday. "I love coaching. I do. It's something that I'm passionate about. It brings me joy. And I love helping young people reach their potential and become the best version of themselves. I'm gifted to do that. But this is bigger than that."

Flores, who has more than a decade of coaching experience in the NFL, was fired as the Dolphins' head coach after three years in early January, despite having signed a five-year contract with the team, according to the Pro Football Network.

During Flores' tenure, the Dolphins went 5-11, 10-6 and 9-8. The team, however, failed to make the playoffs during those three years.

The suit, filed on the first day of Black History Month, is intended to "shine a light on the racial injustices that take place inside the NFL," according to a brief statement released by Wigdor LLP, the law firm representing Flores.

"We fully expect coaches and players of all races to support Brian as he embarks on his journey to create positive change," the statement adds.

Flores alleges in the suit that the NFL is racially segregated and "managed much like a plantation," charging that its 32 owners, none of whom are Black, profit from the labor of its players, 70% of whom are African American.

The 58-page lawsuit names the NFL, the New York Giants, the Denver Broncos, and the Dolphins — along with the other 29 teams in the league as "John Doe's."

The lawsuit seeks compensatory and punitive damages for all Black head coaches, offensive and defensive coordinators and quarterback coaches as well as general managers and African American candidates for those positions.

It also seeks a declaratory judgment that the NFL and its teams violated the laws of the United States and New York and New Jersey.

According to the lawsuit, in 2019 Dolphins owner Stephen Ross told Flores he would pay him $100,000 for every loss during his first season because he wanted the club to "tank" so it could secure the top pick in the NFL draft.

The lawsuit also alleged that Ross then pressured Flores to recruit a "prominent" unidentified quarterback in violation of the League's tampering rules. Once Flores refused to do so, he alleges he was cast as the "angry Black man" who was "noncompliant and difficult to work with" — resulting in his termination as head coach.

Ross did not immediately respond to the lawsuit.

The NFL "lives in the past," the suit states, and "remains rife with racism, particularly when it comes to the hiring and retention of Black Head Coaches, Coordinators and General Managers."

The suit went on to point out that, despite the fact that 70% of NFL players are Black, none of the 32 team owners are, and Black people are scarcely represented among the ranks of head coaches, coordinators, and general managers.

Currently, only one head coach in the league, Pittsburgh's Mike Tomlin, is African American. David Culley, who is also Black, was fired by the Houston Texans at the end of the regular season.

In response, the NFL released a statement saying it will defend "against these claims, which are without merit."

"The NFL and our clubs are deeply committed to ensuring equitable employment practices and continue to make progress in providing equitable opportunities throughout our organizations," according to the NFL.

"Diversity is core to everything we do, and there are few issues on which our clubs and our internal leadership team spend more time," the statement adds.

Flores also alleged that he learned last week in a text exchange with New England Patriots Coach Bill Belichick that the Giants had moved forward in hiring Brian Daboll as their new coach — before Flores had his interview with the team.

The Giants, too, released a statement following the release of the lawsuit, saying the coach they hired they felt was "most qualified" to be their next head coach.

"We are pleased and confident with the process that resulted in the hiring of Brian Daboll," the Giants said in a statement, according to ESPN's Jordan Raanan. "The fact of the matter is, Brian Flores was in the conversation to be our head coach until the eleventh hour."

The lawsuit also alleges that Flores was forced to undergo a "sham interview" with the Denver Broncos three years ago.

Then-Broncos general manager John Elway along with President Joe Ellis and others showed up an hour later for his interview, looking "completely disheveled" as if the group was drinking heavily the night before, the lawsuit says.

"It was clear from the substance of the interview that Mr. Flores was interviewed only because of the Rooney Rule," the lawsuit states, referring to the NFL's policy requiring teams to interview at least two external minority candidates for open head coaching positions.

In a statement obtained by The Associated Press, the Broncos said allegations in the lawsuit were "blatantly false."

"Pages of detailed notes, analysis and evaluations from our interview demonstrate the depth of our conversation and sincere interest in Mr. Flores as a head coaching candidate," the statement said.

"Our process was thorough and fair to determine the most qualified candidate for our head coaching position. The Broncos will vigorously defend the integrity and values of our organization — and its employees — from such baseless and disparaging claims," the statement adds.

In the lawsuit, Flores states his treatment by both the Giants and Broncos is just an extension of how the Rooney Rule has been applied in the league for the last 20 years, giving examples of teams who have failed to comply with the rule.

NPR has compiled a list of stories, performances and other content that chronicles the Black American experience for Black History Month. See the whole collection here.