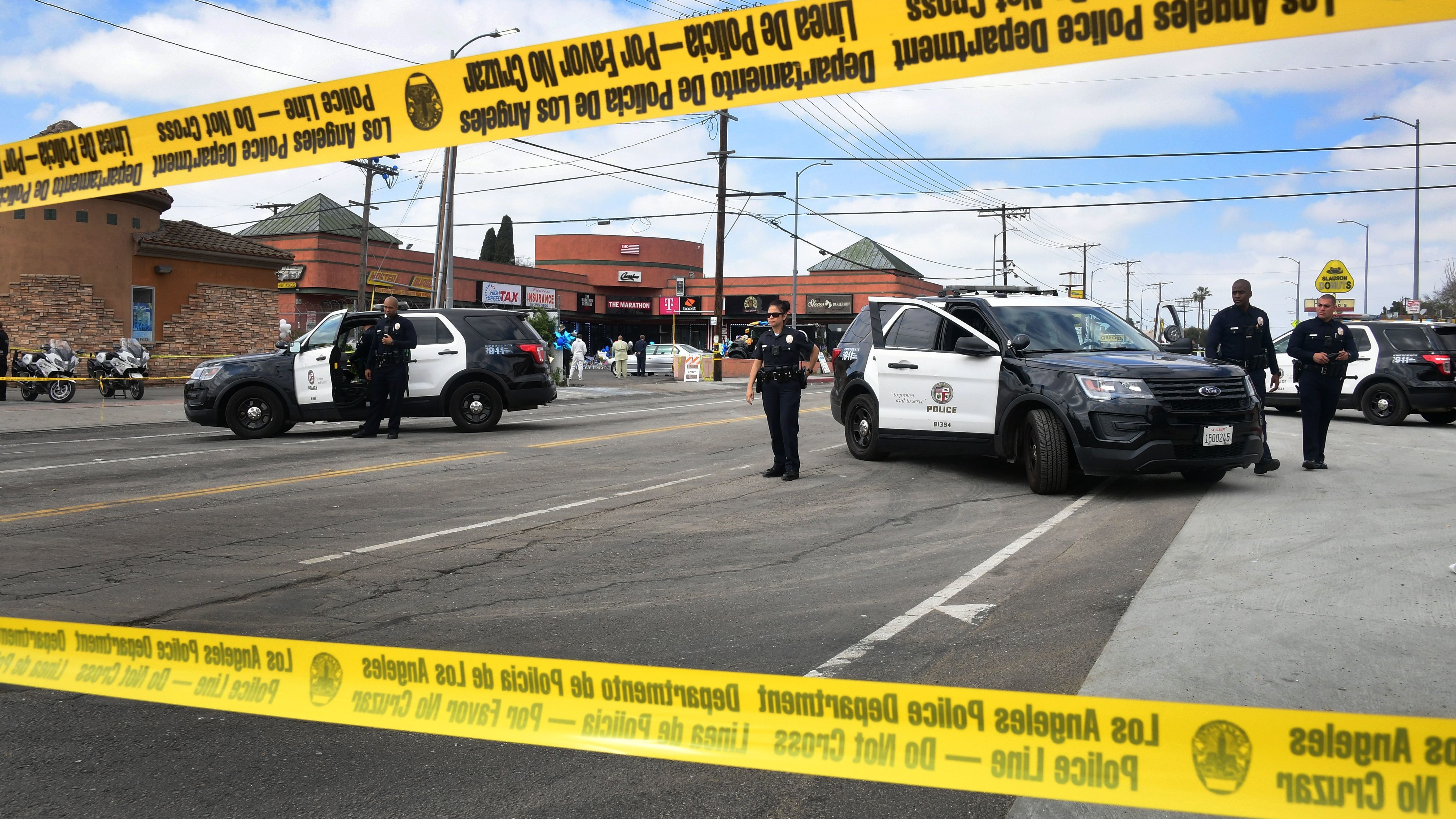 Police monitor a roadblock in front of the late Nipsey Hussle's The Marathon Store in Los Angeles on Tuesday. Authorities announced the arrest of the shooting suspect in the rapper's death. Photo by Frederic J. Brown - AFP/Getty Images

On Tuesday afternoon, the LAPD announced that it has arrested Eric Holder, a 29-year-old Los Angeles man whom authorities have identified as the suspect in the Sunday killing of rapper and entrepreneur Nipsey Hussle on Sunday afternoon.

The suspect was first arrested by police in the city of Bellflower in Los Angeles County, the LAPD confirmed to NPR.

According to a police statement issued on Monday, it is believed that Holder walked up to three men in front of Marathon Clothing, the 33-year-old musician's store in the Crenshaw area of South Los Angeles, and fired numerous times at them. Holder then allegedly fled the shooting as the passenger in a white 2016 Chevy Cruze driven by an unidentified woman. The LAPD told NPR on Tuesday afternoon that it had no updates on the woman driving the car.

At a press conference held Tuesday morning that included L.A. Mayor Eric Garcetti and LAPD chief Michel Moore, Moore said that based on video evidence and witness statements, Holder allegedly spoke to Nipsey Hussle, left the area and then came back with a gun. He added that the police believes there was some kind of dispute between Nipsey Hussle and Holder, but declined to characterize the nature of the argument. (Moore later said, in answering a question from the media, that the LAPD believes that Holder is a gang member — and Nipsey Hussle's past gang activity is known — but Moore declined to say that the killing was in any way gang-related.)

The Grammy-nominated Nipsey Hussle, born Ermias Asghedom, died from his wounds. A longtime community philanthropist and activist, he had been scheduled to meet Tuesday with L.A. police commissioner Steve Soboroff and Moore about ways to help stop gang violence. "I'm very sad," Soboroff wrote on Twitter.

Meanwhile, there was a stampede at a memorial vigil held for Nipsey Hussle Monday evening. At the Tuesday press conference, Michel Moore said that someone in the crowd who was armed either brandished or displayed a gun, and that another person attempted to disarm him to protect the crowd.

Moore posted on Twitter Monday night that 13 people sustained injuries as attendees fled; 12 were treated onsite. Multiple news outlets later reported that, per the Los Angeles Fire Department, at least 19 people were injured. Most of those were injured by falls, sprains and being cut by glass; Moore said that some in the crowd were throwing glass at the police. One person was reportedly stabbed.

The chaos in the crowd was frightening. "Tonight was the first night in a while that I honestly felt scared on the job," ABC7 reporter Veronica Miracle wrote on Twitter. "Babies were screaming, people were shoving themselves under our @ABC7 news van for cover while crying, people were trampled. My heart hurts for everyone who came here to mourn @NipseyHussle's death."

Chief Moore also posted on Monday evening that Nipsey Hussle's death was one of 26 shootings and 10 homicides that have occurred in Los Angeles in the week since March 24.

"That's 36 families left picking up the pieces," Moore wrote on Twitter. "We will work aggressively with our community to quell this senseless loss of life."

END_OF_DOCUMENT_TOKEN_TO_BE_REPLACED
KCRW's Power in Numbers Drive: Today, your dollars will be doubled up to $25,000, thanks to the generosity of Paul & Renee Haas.
Give Now
Give Now