Why There's A Global Outcry Over Volunteering At Orphanages 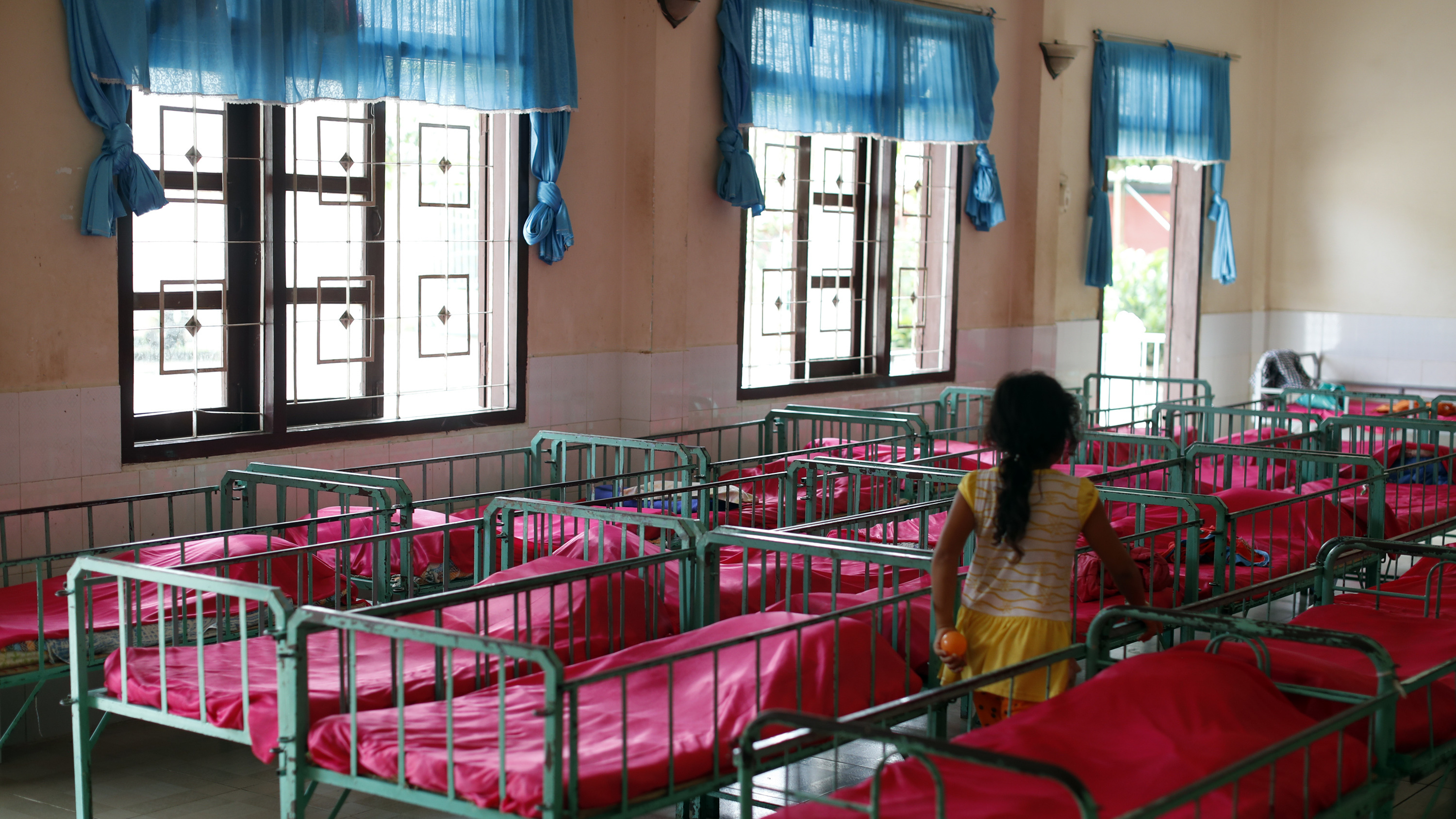 The dormitory in an orphanage in Vietnam. Photo by Godong - Universal Images Group via Getty

There's a growing global campaign which may seem harsh and heartless. The message: Don't visit orphanages.

Last year, the British government updated its travel advice to discourage tourists from visiting or volunteering in orphanages, saying it could have "serious unintended consequences." In April, the Dutch parliament held a debate on the practice and its connection to human trafficking.

And at an October conference for global leaders sponsored by the One Young World group, author J.K. Rowling spoke on the issue: "Despite the best of intentions, the sad truth is that visiting and volunteering in orphanages drives an industry that separates children from their families and puts them at risk of neglect and abuse."

There are at least 2.7 million kids in orphanages and institutionalized care around the world, according to UNICEF's latest estimate from 2017. The actual number is likely far higher, the agency says, because many countries don't include children living in privately run facilities in their tallies.

For decades, spending time in orphanages has been a popular voluntourism activity. Critics call it "orphanage tourism." Sometimes it's a preplanned trip with a full week at the institution, arranged by an organization, church or travel agency. Other times, a vacationer might just set aside a couple hours to visit an orphanage and play with the kids.

Although the unregulated nature of orphanage tourism means there are no reliable numbers on how many volunteers participate each year, the practice is widespread enough that the U.K. and Australia as well as the U.S. have taken public stands.

These trips can bring a lot of money into orphanages in the form of fees and on-site donations. In addition, visitors often convince family and friends back home to make significant donations as well. Orphanage Support Services Organization (OSSO), for example, has volunteer opportunities in Ecuador and Thailand with a $190 application fee, a requested $100 donation and a $695 fee for one week to cover living expenses, transportation to the orphanage and other expenses.

According to their founder, Rex Head, most of those fees cover the costs of a volunteer's stay as well as living expenses and additional costs for an on-site volunteer director. Any leftover fees go to the orphanage. Head, who is a doctor, says the staff at his medical practice take care of OSSO's other administrative duties, and the organization donates an additional $300,000 to $400,000 in goods and cash from other funding streams each year to orphanages.

Critics say there's a problem with this type of community service and generosity. All that money has led unscrupulous institutions to promise food, education or a better life to recruit children from families into the orphanages, according to the U.S. Department of State's 2018 Trafficking in Persons report. "Child finders," as the report calls the recruiters, capitalize on parental concerns about poverty, conflicts, natural disasters and a lack of resources for a child with disabilities in order to convince parents to turn over their children, who are then used to attract lucrative international donations and volunteers.

A Save the Children report published in 2009 estimated that globally, at least four in five children in institutional care have at least one living parent. (The estimate is based on surveys and studies conducted by government agencies and nongovernmental organizations in seven countries plus Central and Eastern Europe and the former Soviet Union to determine if children in institutions have one or both parents alive.)

The Trafficking in Persons report says that some institutions force children to perform traditional dances or interact with visitors to encourage more donations. In addition, the report notes, they are sometimes malnourished or not given sufficient medical attention to garner more sympathy — and money from visitors and donors. Between the recruiting and the forced labor, critics are calling these practices modern slavery. In 2018, Australia became the first country to criminalize recruiting children into orphanages as a form of slavery.

What's more, some researchers who study child welfare question the role of all orphanages.

The United Nations' Convention on the Rights of the Child declares that every child has the right to grow up in a family environment, and its Guidelines for the Alternative Care of Children states that institutional care should be a temporary "last resort" for the "shortest possible duration."

Andrea Freidus, an assistant professor of anthropology at the University of North Carolina at Charlotte, says that in her extensive research of orphans and orphanages in southern Africa, she found that extended families and social networks are "very resilient" as an alternative to institutionalization.

"[Orphans] are just not abandoned in the way people in the West think," says Freidus. "If there are family networks that these children are willing to go to, then why institutionalize them? We don't do that in the U.S. anymore, and most [Western] European countries don't do it anymore, because we know it's bad for kids."

Many studies, going back decades, conclude that children who grow up in institutions have poorer outcomes. For example, a 2006 UNICEF report cited a study in Russia that suggested that "one in three young people who leave residential institutions becomes homeless, one in five ends up with a criminal record, and one in ten commits suicide." Other studies point to increased rates of mental illness, physical and intellectual underdevelopment as well as a higher risk of being trafficked.

"If you really want to help them, help their extended families take care of them," says James Kassaga Arinaitwe, CEO and co-founder of Teach for Uganda and an Aspen Institute New Voices Fellow. Arinaitwe was raised by his grandmother after his mother died of cancer and his father of AIDS.

Even if children in an institution have a positive experience with a short-term volunteer, there's a potential downside. When the volunteer departs, a child's feelings of abandonment and emotional stress can be heightened, the U.S. Department of State's Trafficking in Persons report warns.

But some researchers still think the right kind of group setting can be beneficial. Kathryn Whetten, a Duke professor of public policy and director of the Center for Health Policy and Inequalities Research, is one of them. She's been studying a group of 3,000 orphaned and separated children in Cambodia, India, Ethiopia, Kenya and Tanzania since 2005.

"We see the same continuum of bad and good care in the group homes as we see in the family settings," Whetten told NPR last year. "What the kids really seem to need is a home-like environment."

Bud Philbrook, CEO and co-founder of Global Volunteers, an organization that assigns short-term volunteers to various development projects abroad, including a children's home in Peru, says it's "irresponsible" to condemn all orphanages.

"To use a broad brush and say all orphanages are somehow adversely affecting the children is problematic," Philbrook says. "Ideally, we want children to be with their parents at home, but that requires parents to be able to [feed] their kids and ensure their health care and education."

OSSO's founder, Head, says that in the 24 years he's worked with orphanages, he's certainly come across unscrupulous institutions, but he's worried that the backlash against orphanages will send children into abusive families, either their own or in foster care without sufficient oversight.

"Good foster care is better than a good orphanage, but bad foster care isn't," Head says. "The most important thing for children is that they are loved, and that can happen in many types of settings."

Still, more groups are opting to put a stop to orphanage visits. In September, the Association of British Travel Agents partnered with the British charity Hope and Homes for Children to set up a task force that aims to discourage tourists, governments and travel agencies from supporting orphanage tourism. VSO — which committed in 2016 to no longer send volunteers to orphanages — also helped launch a "Global Standard for Volunteering in Development" in October. Organizations can use these guidelines to design responsible volunteering opportunities, ones that are led by local communities, promote cultural exchange and bring in individuals with skills that aren't available locally.

VSO hopes that, as more organizations commit to the "Global Standard," orphanage tourism can be eradicated.

"Just because it's been happening for decades doesn't mean it's right," says Chloe Setter, senior adviser on trafficking, modern slavery and voluntourism at Lumos, the children's rights organization founded by Rowling in 2005. The idea isn't to shame orphanage volunteers, she says, but to start "questioning and challenging our own beliefs."

Joanne Lu is a freelance journalist who covers global poverty and inequity. Her work has appeared in Humanosphere, The Guardian, Global Washington and War is Boring. Follow her on Twitter: @joannelu