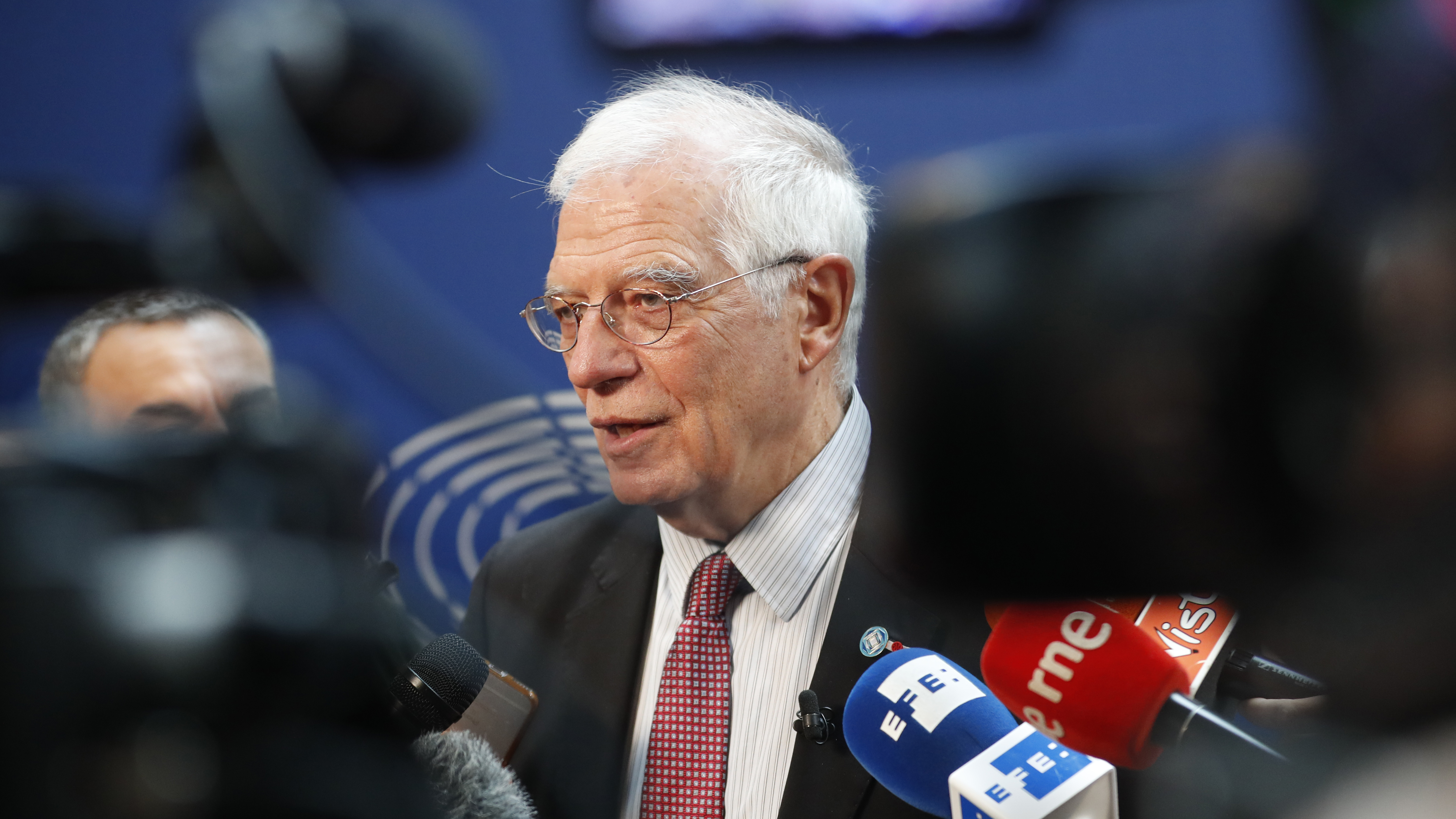 The European Union's foreign policy chief, Josep Borrell, talks to reporters Tuesday at the European Parliament in Strasbourg, France. The same day, the U.K., France and Germany announced they were lodging a dispute against Tehran under the Joint Comprehensive Plan of Action, or JCPoA, better known as the Iran nuclear deal. Photo by Jean-Francois Badias - AP

The 2015 Iran nuclear deal, already teetering after the U.S. withdrawal and subsequent breaches by the Iranian government, has suffered yet another grave blow.

The foreign ministers of the U.K., France and Germany — half of the deal's remaining signatories — announced Tuesday that they are lodging a formal complaint that Iran is not meeting its commitments. To do so, they are triggering a dispute resolution mechanism in the agreement, known as the Joint Comprehensive Plan of Action.

The move launches a negotiation period of up to 60 days, during which the countries will seek to bring Iran back into full compliance. Should that process fail, U.N. sanctions on Tehran that were lifted as part of the deal, including an arms embargo, are likely to be reinstated.

Still, the three countries stressed that their goal is the deal's survival, not the resumption of sanctions.

"Our three countries are not joining a campaign to implement maximum pressure against Iran," the diplomats explained in a joint statement released Tuesday. "Our hope is to bring Iran back into full compliance with its commitments under the JCPoA."

"We do this in good faith with the overarching objective of preserving the JCPoA and in the sincere hope of finding a way forward to resolve the impasse through constructive diplomatic dialogue, while preserving the agreement and remaining within its framework," the diplomats explained in a joint statement released Tuesday.

They explained that, while they are concerned with recent Iranian violations, the decision to hash out the dispute using procedures laid out in the deal reflects their continued faith in its effectiveness — and their continued rejection of the route taken by the Trump administration, when it unilaterally pulled out over its own concerns and reinstated sanctions on Iran in 2018.

Since then, Iran has repeatedly breached the terms of the agreement, which stipulates that the country refrain from enriching its stores of uranium more than 3.67% — an amount commonly seen in nuclear power reactors around the world. Weapons grade uranium, the kind that could be used in a nuclear weapon, typically has enrichment levels closer to 90%.

In November, Iranian authorities announced plans to bump enrichment levels to 5% and ramp up operations at a controversial underground facility. Both steps violate the nuclear deal.

As hopeful as Tuesday's announcement sounds, the move — which the deal's other remaining signatories, Russia and China, did not join — is unlikely to improve the outlook for the battered nuclear deal. Tehran has forcefully rejected the idea that this move is a productive one — and, in a Foreign Ministry statement Tuesday, vowed to meet it with its own "serious and strong response."

The three European countries "can save JCPOA but not by appeasing the bully & pressuring the complying party," Iranian Foreign Minister Javad Zarif said Monday, in a statement anticipating the move and associating it with "bully" Washington. "Rather [the group] should muster the courage to fulfill its own obligations."

The move comes at a particularly turbulent time for the Iran, which is reeling from the news that its military mistakenly shot down a Ukrainian passenger jet amid heightened tensions with the United States. Tehran admitted the "unforgivable mistake" late last week, after spending several days forcefully denying that one of its own missiles brought down the jetliner, killing scores of Iranians, Canadians and other passengers.

Iran carried out the unintentional strike around the same time it executed an attack it did intend — a series of strikes on Iraqi bases that host U.S. troops, in retaliation for the Washington-ordered killing of prominent Iranian commander Qassem Soleimani one week earlier.

Amid this deepening friction, British Prime Minister Boris Johnson likely made no friends in Tehran by suggesting that he is open to scrapping and replacing the Iran nuclear deal with a new agreement orchestrated by President Trump.

"If we're going to get rid of it, let's replace it, and let's replace it with the Trump deal — that's what we need to see. And I think that would be a great way forward," Johnson told the BBC in an interview released Tuesday, without explaining details of what that deal would entail or how it would differ from the 2015 agreement.

"President Trump is a great dealmaker, by his own account and many others," Johnson added. "Let's work together to replace the JCPOA and get the Trump deal instead."

Despite Johnson's remarks, his foremost diplomats and those of France and Germany reiterated that they hope above all to preserve the JCPOA.

"Given recent events," they said, "it is all the more important that we do not add a nuclear proliferation crisis to the current escalation threatening the whole region."

So, what's next in the dispute?

According to Paragraph 36 of the agreement, the matter will be referred to a joint commission composed of representatives from Iran, Russia, China, Germany, France, Britain and the European Union.

The commission will have 15 days to offer a resolution, though the participants can agree on an extension. If there is no resolution after this period elapses, the matter is then, for another 15 days, referred to the group's foreign ministers or an advisory board with three members — one each appointed by either side and a third, independent member.

Only then, after at least 30 days, can the complainants use the dispute as acceptable grounds for withdrawing from the agreement and notifying the U.N. Security Council of Iran's noncompliance.

After such a notification, the Security Council would need to pass a resolution in order to continue Iran's relief from U.N. sanctions — which would be a tall order, given the veto power of by the U.S., the U.K. and France. Should no such resolution be approved, previous U.N. sanctions would snap back into place.