How COVID-19 Kills: The New Coronavirus Disease Can Take A Deadly Turn 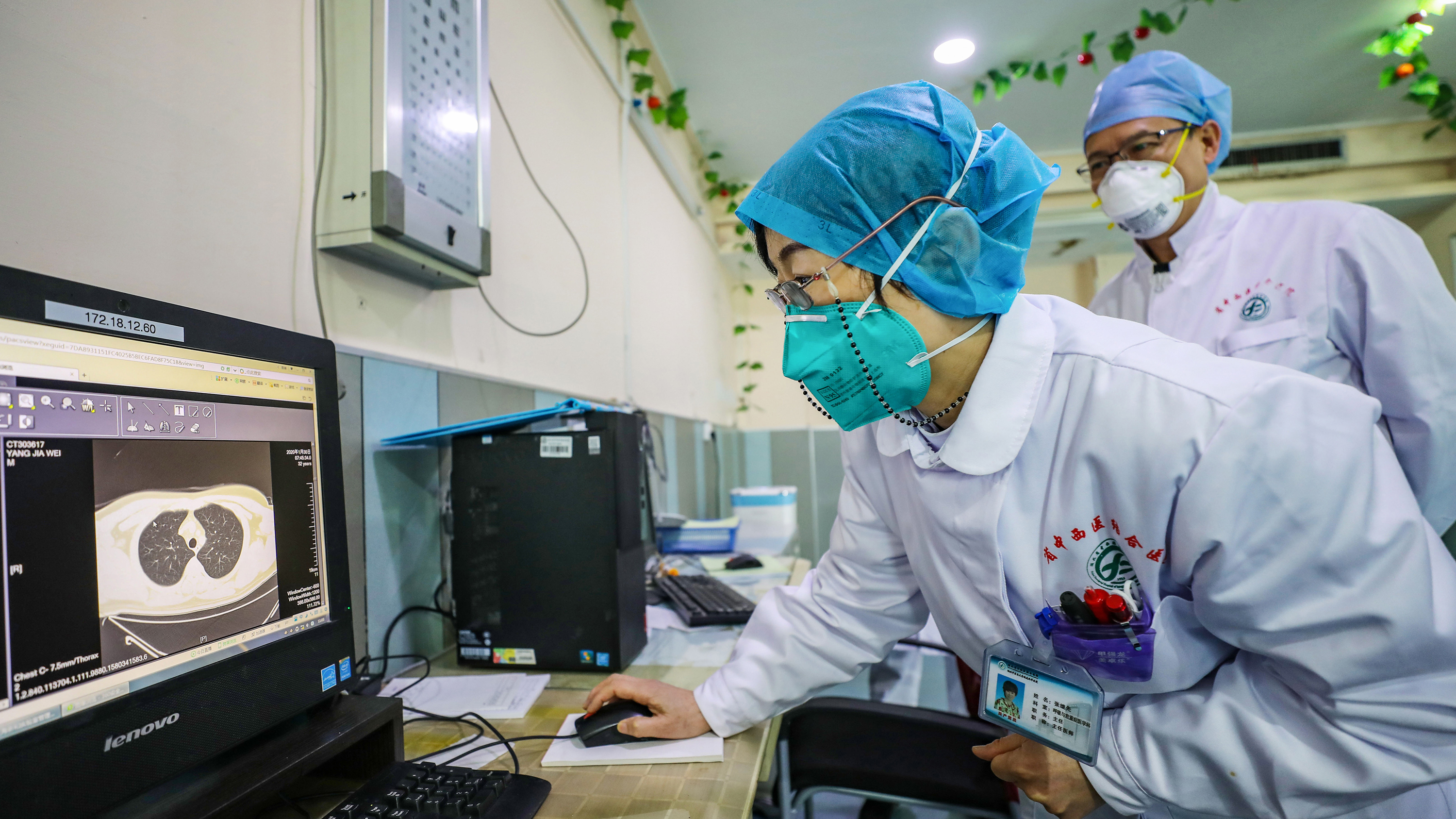 A doctor wearing a face mask looks at a CT image of a lung of a patient at a hospital in Wuhan, China. Photo by NPR - AFP via Getty Images

More than 1,300 people, almost all in China, have now died from COVID-19 — the newly minted name for the coronavirus disease first identified in Wuhan, China, that has infected more than 55,000 people.

Yet according to the World Health Organization, the disease is relatively mild in about 80% of cases, based on preliminary data from China.

What does mild mean?

And how does this disease turn fatal?

The first symptoms of COVID-19 are pretty common with respiratory illnesses — fever, a dry cough and shortness of breath, says Dr. Carlos del Rio, a professor of medicine and global health at Emory University who has consulted with colleagues treating coronavirus patients in China and Germany. "Some people also get a headache, sore throat," he says. Fatigue has also been reported — and less commonly, diarrhea. It may feel as if you have a cold. Or you may feel that flu-like feeling of being hit by a train.

Doctors say these patients with milder symptoms should check in with their physician to make sure their symptoms don't progress to something more serious, but they don't require major medical intervention.

But the new coronavirus attacks the lungs, and in about 20% of patients, infections can get more serious. As the virus enters lung cells, it starts to replicate, destroying the cells, explains Dr. Yoko Furuya, an infectious disease specialist at Columbia University Irving Medical Center.

"Because our body senses all of those viruses as basically foreign invaders, that triggers our immune system to sweep in and try to contain and control the virus and stop it from making more and more copies of itself," she says.

But Furuya says that this immune system response to this invader can also destroy lung tissue and cause inflammation. The end result can be pneumonia. That means the air sacs in the lungs become inflamed and filled with fluid, making it harder to breathe.

Del Rio says that these symptoms can also make it harder for the lungs to get oxygen to your blood, potentially triggering a cascade of problems. "The lack of oxygen leads to more inflammation, more problems in the body. Organs need oxygen to function, right? So when you don't have oxygen there, then your liver dies and your kidney dies," he says.

That's what seems to be happening in the most severe cases. About 3% to 5% of patients end up in intensive care, according to the WHO. And many hospitalized patients require supplemental oxygen. In extreme cases, they need mechanical ventilation — including the use of a sophisticated technology known as ECMO (extracorporeal membrane oxygenation), which basically acts as the patient's lungs, adding oxygen to their blood and removing carbon dioxide. The technology "allows us to save more severe patients," Dr. Sylvie Briand, director of the WHO's pandemic and epidemic diseases department, said at a press conference Monday.

Many of the more serious cases have been in people who are middle-aged and elderly — Furuya notes that our immune system gets weaker as we age. She says for long-term smokers, it could be even worse because their airways and lungs are more vulnerable. People with other underlying medical conditions, such as heart disease, diabetes or chronic lung disease, have also proved most vulnerable. Furuya says those kinds of conditions can make it harder for the body to recover from infections.

"Of course, you have outliers — people who are young and otherwise previously healthy who are dying," Dr. Anthony Fauci, director of the National Institute of Allergy and Infectious Diseases, recently told NPR's 1A show. "But if you look at the vast majority of the people who have serious disease and who will ultimately die, they are in that group that are either elderly and/or have underlying conditions."

The WHO has said most deaths so far appear to be from multi-organ failure and has calculated the case fatality rate at about 2% or less, based on earlier data from China. However, infectious disease experts note that it's hard to know the true numbers at this point in the epidemic.

But del Rio notes that it's not just COVID-19 that can bring on multi-organ failure. Just last month, he saw the same thing in a previously healthy flu patient in the U.S. who had not gotten a flu shot.

"He went in to a doctor. They said, 'You have the flu — don't worry.' He went home. Two days later, he was in the ER. Five days later, he was very sick and in the ICU" with organ failure, del Rio says. While it's possible for patients who reach this stage to survive, recovery can take many weeks or months.

In fact, many infectious disease experts have been making comparisons between this new coronavirus and the flu and common cold, because it appears to be highly transmissible.

"What this is acting like — it's spreading much more rapidly than SARS [severe acute respiratory syndrome], the other coronavirus, but the fatality rate is much less," Fauci told 1A. "It's acting much more like a really bad influenza."

What experts fear is that, like the flu, COVID-19 will keep coming back year after year.