Last night at the Grammy Awards, Kendrick Lamar gave an electrifying performance about being black in America. He came on stage shackled in chains, wearing prison blues, while his band performed behind bars. Meanwhile, Hillary Clinton is scheduled to deliver a big speech on race in New York today. Both she and Bernie Sanders have had to address issues facing African-Americans and minorities as they compete in more racially diverse states. Mass incarceration, police brutality, inequality, Ferguson … the list looms large in this election. We discuss it all with two guests. 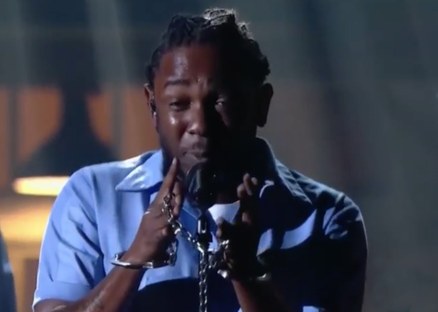 The fallout from Supreme Court Justice Antonin Scalia’s death is being felt on the campaign trail. One of the most controversial decisions he backed was Citizens United, the...

Porter Ranch: What’s in the Air?

L.A. County Supervisor Mike Antonovich, Sen. Barbara Boxer and other state and local politicians are calling for more testing to make sure the area around the gas leak in...

The Real Story of Bringing the NFL Back to LA

For years and years – since the Rams left in 1994 really – there’s been talk about bringing pro football back to Los Angeles. Now, it’s finally happening. The Rams and maybe...

Last night at the Grammy Awards, Kendrick Lamar gave an electrifying performance about being black in America. He came on stage shackled in chains, wearing prison blues,...