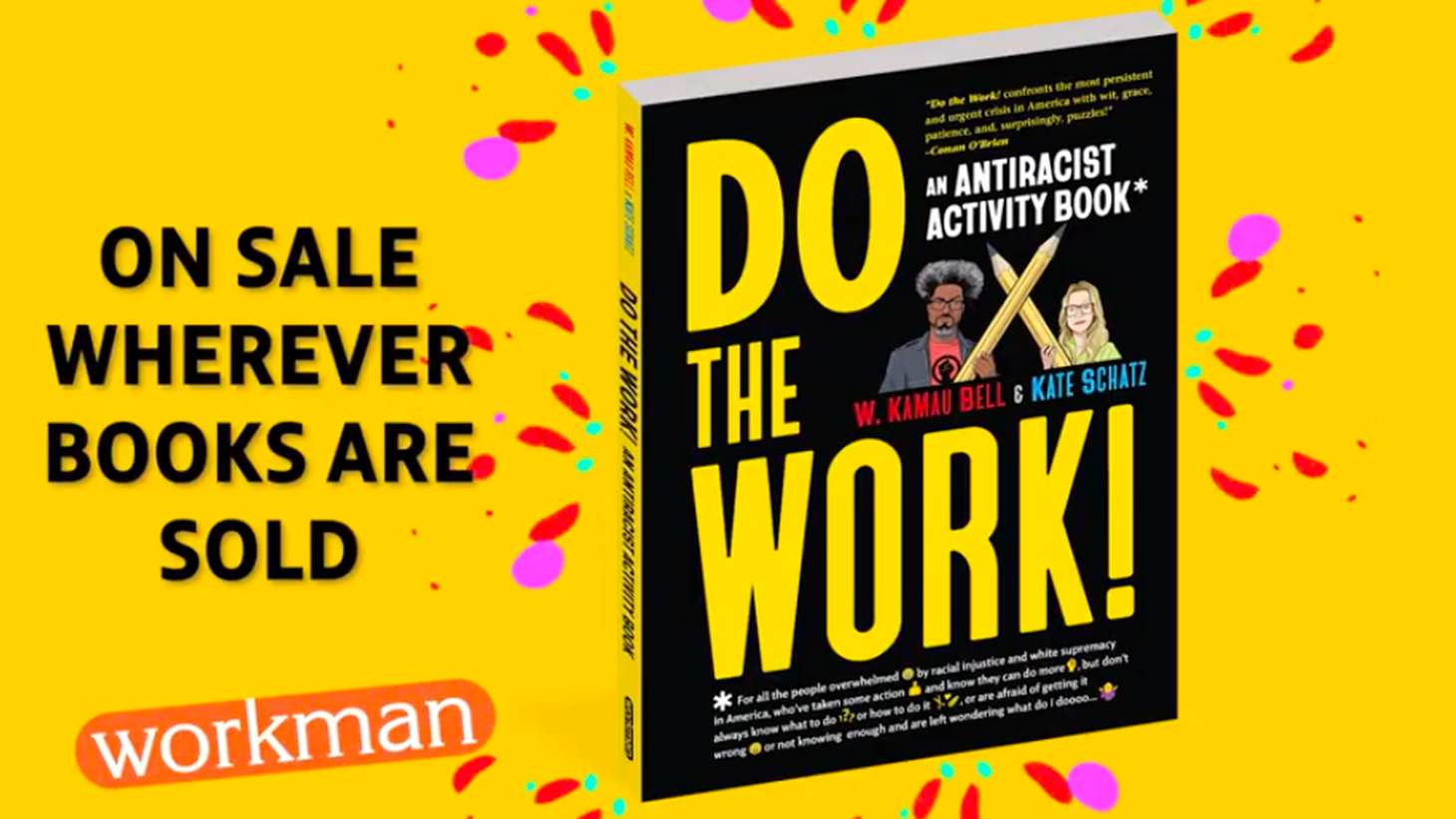 “Do The Work! An Antiracist Activity Book” is an interactive book to help people understand and dismantle systemic racism. Credit: YouTube/Workman Publishing.

It’s now been two years since America really started to grapple with systemic racism. Protests broke out after the killings of Breonna Taylor, George Floyd, Ahmaud Arbery, and countless other Black and Brown people. With books, documentaries, podcasts, and art exhibits, the idea of being an antiracist entered the collective consciousness.

“Do The Work! An Antiracist Activity Book” tries to drive that message home with comedy, crosswords, cutouts, and even a white supremacy word search. It’s written by W. Kamau Bell, a filmmaker and the host of CNN’s “United Shades of America,” and activist Kate Schatz.

Bell defines the “work” as consciously trying to create an anti-racist society every day.

“[It] means being focused on that and having goals and putting plans in your calendar of ways to create an anti-racist society. I think sometimes we get caught up in like, ‘It's voting day. It’s the day to do the work’ or it's going to the one protest. But if you live in the Bay Area like we do, you see activists doing the work every day. So we want people to understand that that's what we have to do.”

The two authors’ relationship crucially shows how people of different backgrounds can come together to have difficult conversations. Some of the book’s subject matter is even based on real-life talks that Bell and Schatz shared.

Humor is a particularly effective way to start uncomfortable dialogues, she points out.

“People like to laugh. And humor is a powerful tool because it can disarm people. And it can lighten something that is actually incredibly heavy and is hard to talk about,” she explains.

Kids can talk about race too

Bell and Schatz are both parents, and they believe it’s important to discuss race with kids.

Racism should be brought up from the very beginning, Schatz says, and other challenging topics can be approached later, at age-appropriate times.

White parents can also talk to their kids about how to be better allies.

“It's also not just about having the conversations as a white parent with your kid about all the things that are terrible and horrific about white supremacy, but also making sure that they are being brought up with an exposure to people who don't look like them,” she explains.

Bell doesn’t understand why people hesitate to discuss race with kids, as those feelings don’t exist with other sensitive topics, like death.

“You're okay with your kids confronting the death of a parent, but you don't want to talk to them about racism? When we talked about ‘you,’ we’re talking about the white ‘you’s’ out there, because my Black mom didn't make a decision about it. Because if she hadn't told me about racism, it would have been negligence.”

Owning up to your mistakes

Bell says no one is immune to white supremacy and it can lead to uncomfortable interactions, but it’s important to acknowledge your mistakes.

“We are all a part of it and get caught up in it. And I think the problem becomes when you make a mistake, and you retreat to your corner, or you get defensive, as we see happen on the internet every day,” he says. “So for me, that's the example. Make the mistake, and as the wise Daniel Tiger says, ‘Saying I'm sorry is the first step, then, how can I help?’”

Schatz adds, “If someone calls us out, or we mess up, we freeze and we get so afraid because it's a horrible feeling when you think that you've messed up. And I actually think that more often than not, when you do a genuine apology and you own it, it's a lot easier to move on … and to grow than we think it's going to be.”

Bell says not much progress has been made in the two years since George Floyd’s murder. He acknowledges that the officers involved were convicted and some went to prison, but unarmed Black men continue to get shot and killed.

“We can look at that one case with George Floyd and say maybe that's some sort of progress. But I think we have to understand we can't look at the micro. Look at the macro.”

He adds that some of the work is still performative, like buying Juneteenth branded ice cream at the grocery store.

After the activity book

At the end of the activity book, readers can fill out a Mad Libs-style certificate.

But Bell says the work doesn’t stop there. “If the work is effective, it is all pointing towards your elected officials. When are they coming up for reelection? Who are the people in the community who you can work with on a daily basis to create less racism in your community? What are the things you can do every day?”