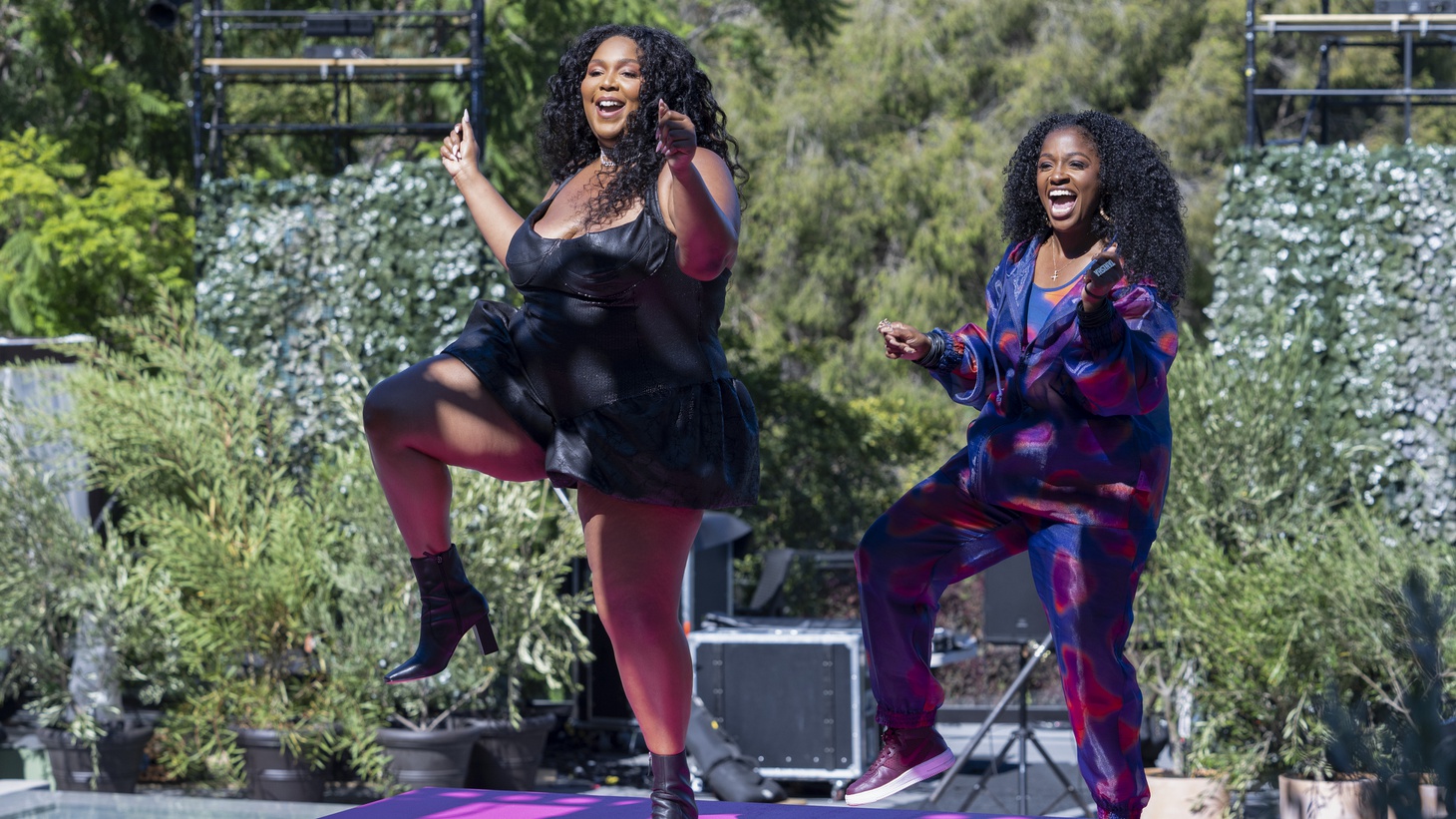 Lizzo and choreographer Tanisha Scott appear in “Lizzo's Watch Out for the Big Grrrls.” Photo by James Clark/Amazon Prime Video.

Lizzo is known for radical anthems about self-love and positivity, and she’s changed the world’s perception of what a pop star looks like. This month, she racked up six Emmy nominations for her new reality competition show, “Lizzo’s Watch Out for the Big Grrrls.” Streaming on Amazon Prime Video, the program documents her journey to find the next talented addition to her dance crew in a world full of skinny dancers.

“I call it docu-ality because I was like, ‘How can I bring some elements of my authentic … creativity, and then also bring in elements that everyone loves — competition, dancing — and really give it something new and dynamic?’” says the show’s director Nneka Onuorah.

She says that whenever Black and Brown women are on television, their characters are always framed as racy or edgy to attract viewers, but they aready experience enough social pressure in real life.

“There was a competition within the person, within themselves, because this is their dream — to dance with Lizzo, to be in front and center in terms of their dance skills. And with that comes a lot of breaking and just dismantling all these ideas of who people say you should be and what you should look like,” Onuorah explains.

She adds, “Sometimes we have internalized competitions with ourselves. … That was a much stronger point of view because it's more authentic, and we're not forcing people to leave when people are doing it to themselves.”

When directing, Onuorah says she works to understand her subjects from the inside out by asking them about their stories. She particularly enjoyed working with those in the Barbie challenge.

“Charity [a contestant from North Carolina] ... had a wig piece on her where she had to throw it off of her head, and she wasn't used to having hair on her head. And that brought up a big story and opened up a vulnerability in her. We had Jayla just moving her body and looking at herself in that mirror representing the trans women.”

She adds, “When you have to use your own story to be creative, it takes you to a deeper, more vulnerable place. … We just talked about some of the nuanced things that people don't typically get to see. We talked about the commercialized ideas of what it means to be plus-sized. But there's a lot of other nuances. ... It’s color. It’s skin complexion. … It’s health.”

Lizzo is humble enough to admit when she’s wrong

Controversy recently swirled around “Grrrls,” one of Lizzo’s latest songs, because it includes a word considered a slur towards people with disabilities. After listening to community feedback, the singer admitted she didn’t know about the use of the word and changed her lyrics.

That’s just one example of how much Lizzo listens to her fanbase, Onuorah says.

“​​We all don't know everything. We all can't be everything to every community. But because she does have such a big platform, she's humble enough … to go back and support and change things and admit that she's wrong, which a lot of people in this day and age are not able to do. And so I love that about Lizzo.”