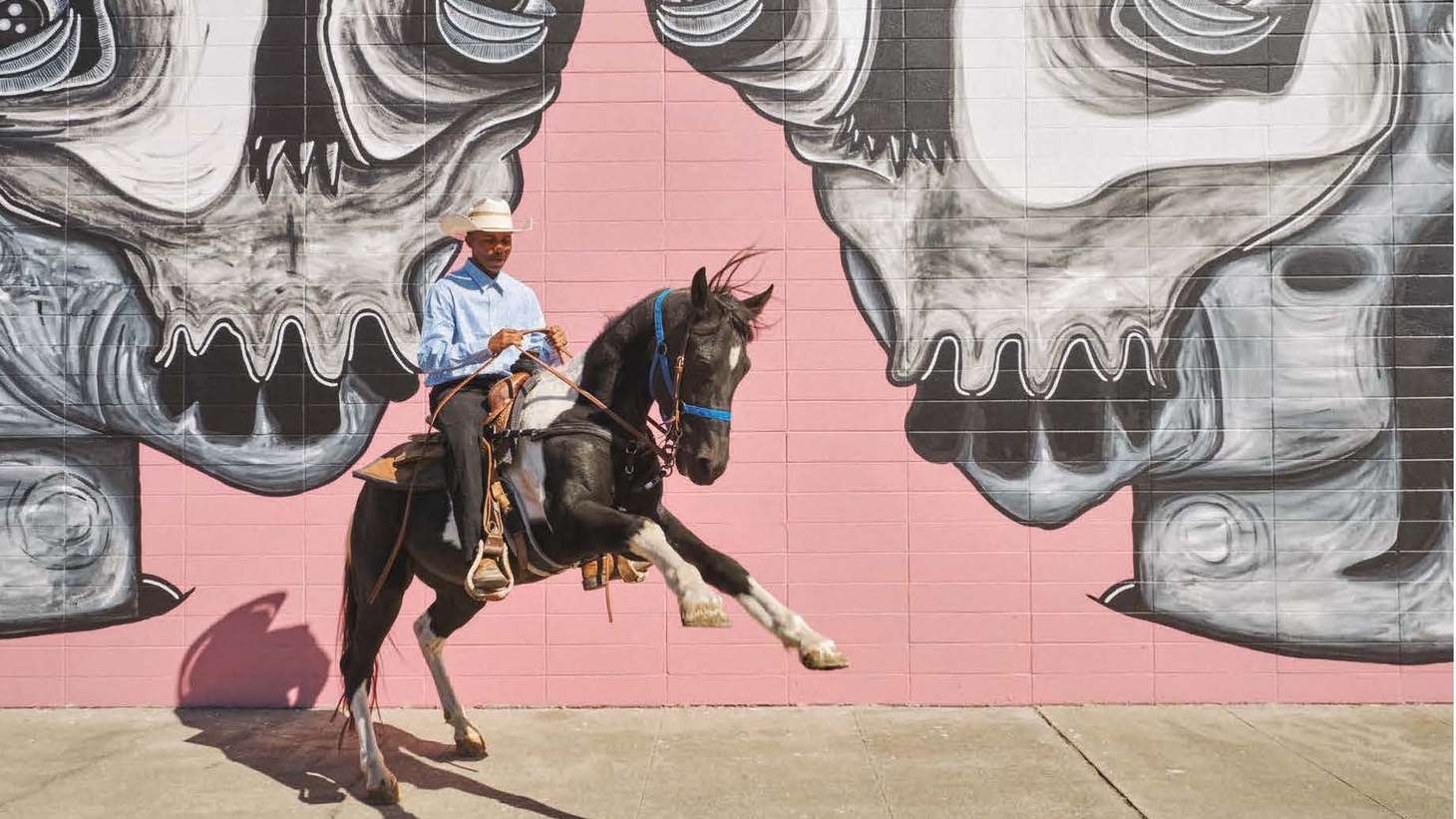 Cowboy Jordan Miller mounts his horse. “Just the fact that there's this culture, this Black community just hidden out here in the hills of the East Bay just kind of blew my mind, because it is one of the safest, warmest, fun communities I've met in a long time,” says photographer Gabriela Hasbun. Photo by Gabriela Hasbun.

Over the last decade, Gabriela Hasbun has photographed African American cowboys and cowgirls when the Bill Pickett Invitational Rodeo comes to Oakland (the rodeo takes place in multiple cities nationwide). She tells their stories in her new book, “The New Black West: Photographs from America's Only Touring Black Rodeo.” KCRW talks to Hasbun, as well as KK Brinson, who’s been competing since she was 13 years old.

Brinson first rode a horse when she was 9 years old at summer camp. It was a sorrel horse and she was frightened by its size. She acclimated within a week, then fell in love with horse riding a year later. She eventually transitioned from camp to a group called Spurred Up, which brought city kids to the countryside. That was when she learned how to do team penning. This weekend, Brinson will be competing in the barrel race at the Bill Pickett Invitational in the City of Industry.

“You have three barrels and a triangle shape. Two barrels sit from 20 feet, and a third sits in between 100 feet, depending on their arena size. And you have the choice of going to the left or right first. And basically you will go outside of the barrel. You're trying to beat a clock to see who has the fastest time on the horse.” 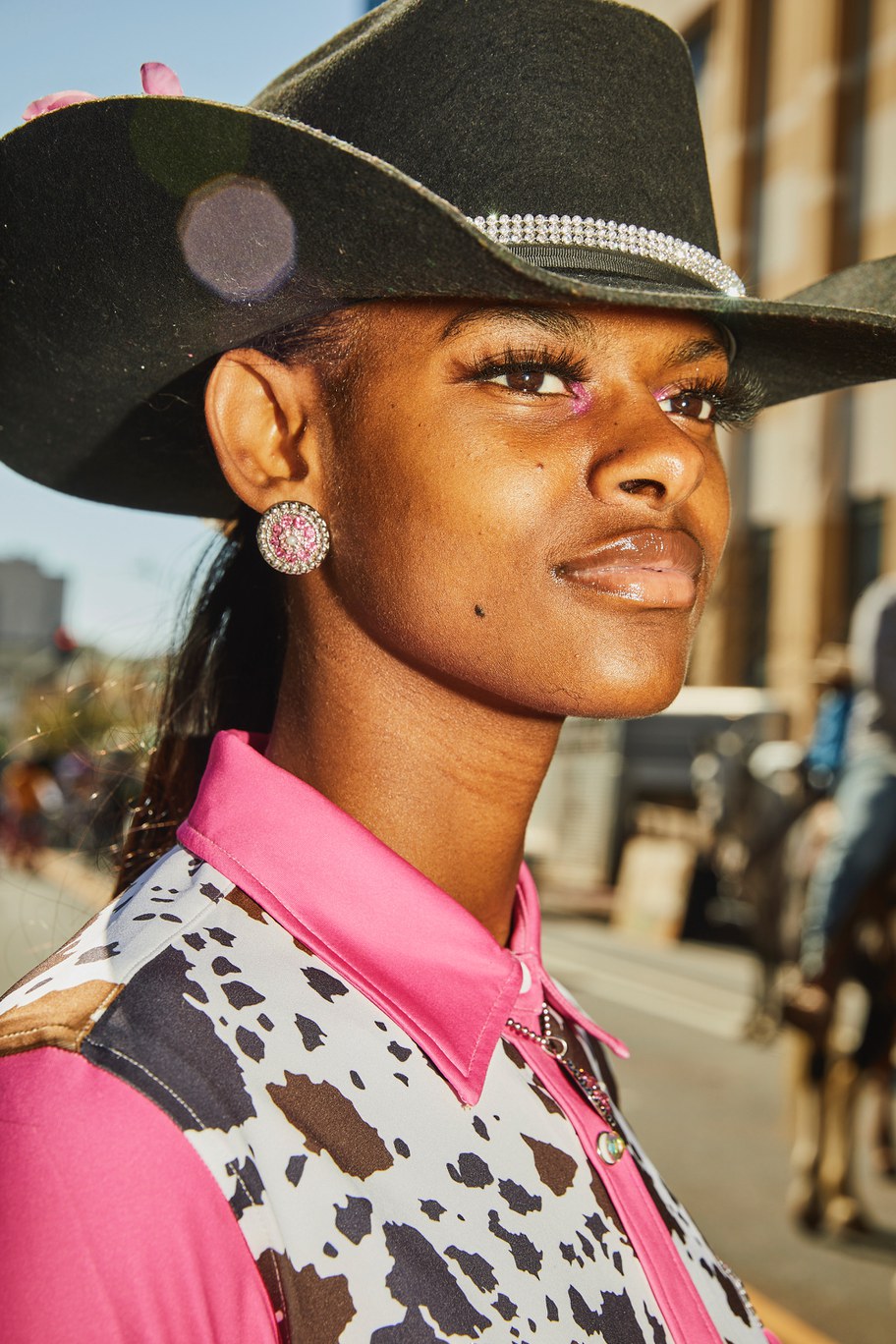 KK Brinson is a rodeo rider from West Oakland. She first fell in love with the profession as a pre-teen. Photo by Gabriela Hasbun

Photographing a hidden Black community in the hills

Hasbun first came across Black cowboys in 2007 when her neighbor was on the hunt for authentic fried catfish. They decided to visit the local rodeo, which turned out to be the Bill Pickett Invitational. She says the first year she attended, she took awful photos. But by the next, she was prepared and loved the results.

“I just really love taking pictures of participants and their horses, what they were wearing, everything was amazing. And then just the fact that there's this culture, this Black community just hidden out here in the hills of the East Bay just kind of blew my mind, because it is one of the safest, warmest, fun communities I've met in a long time. It's really the people that ended up like bringing me back every year just because meeting them was so special,” she explains.

Many of the riders are often fashionably dressed, wearing crisp cotton shirts, customized belt buckles and boots, and designer saddles. Hasbun says she’s always in awe of how stylish they are, including Brinson.

“She's one of the most fashionable people at the rodeo. She's always wearing something amazing. And it's everything from the snakeskin boots that like Leroy, who's a bull rider and retired cowboy. He will go to Tijuana to buy these amazing snakeskin boots. People are also obsessed with Louis Vuitton. Pat Davis, [who] owns a barbecue joint here in Berkeley, had a custom Louis Vuitton saddle made for his horse, Hercules. So it's just really personalized.” 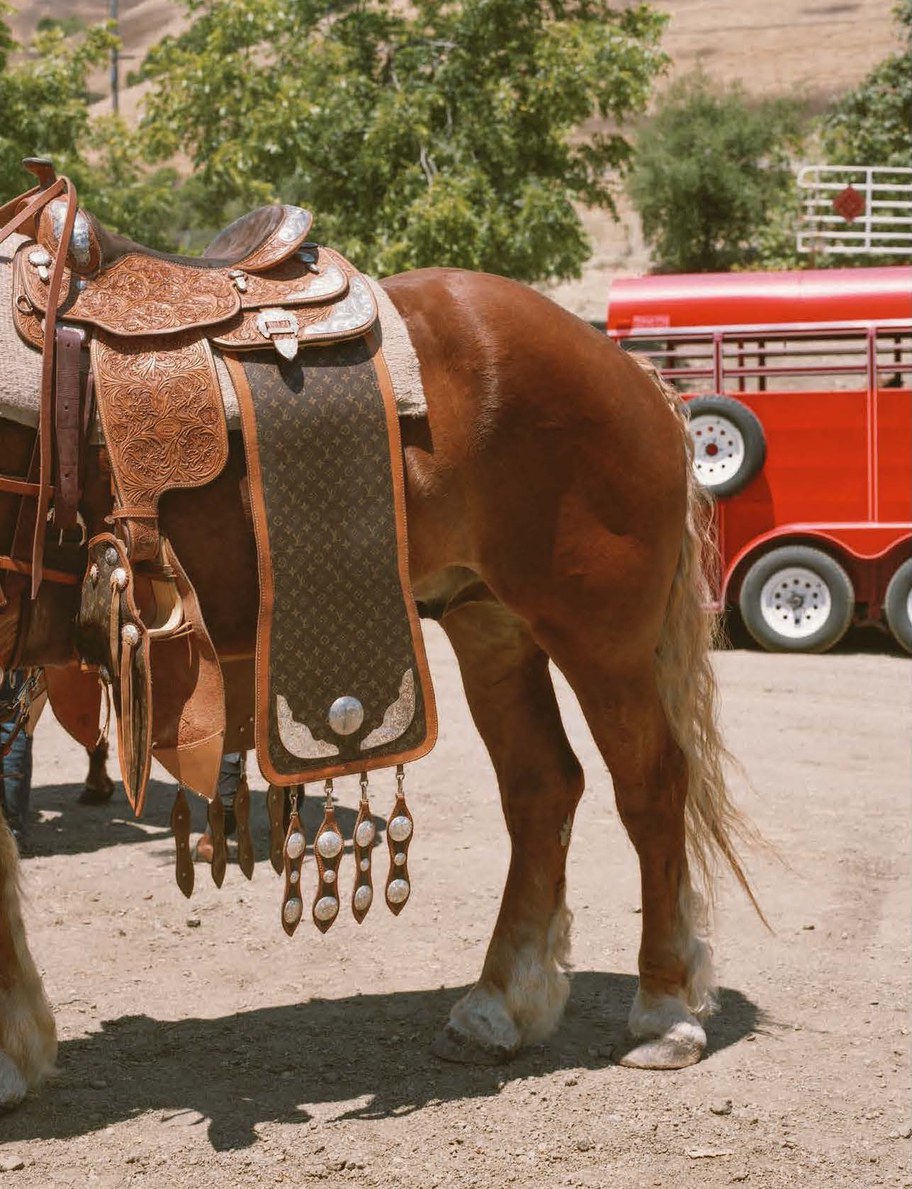 “Pat Davis, [who] owns a barbecue joint here in Berkeley, had a custom Louis Vuitton saddle made for his horse, Hercules,” explains photographer Gabriela Hasbun. Photo by Gabriela Hasbun.

Brinson says she naturally loves to look as stylish as possible. Plus, it helps people remember her. 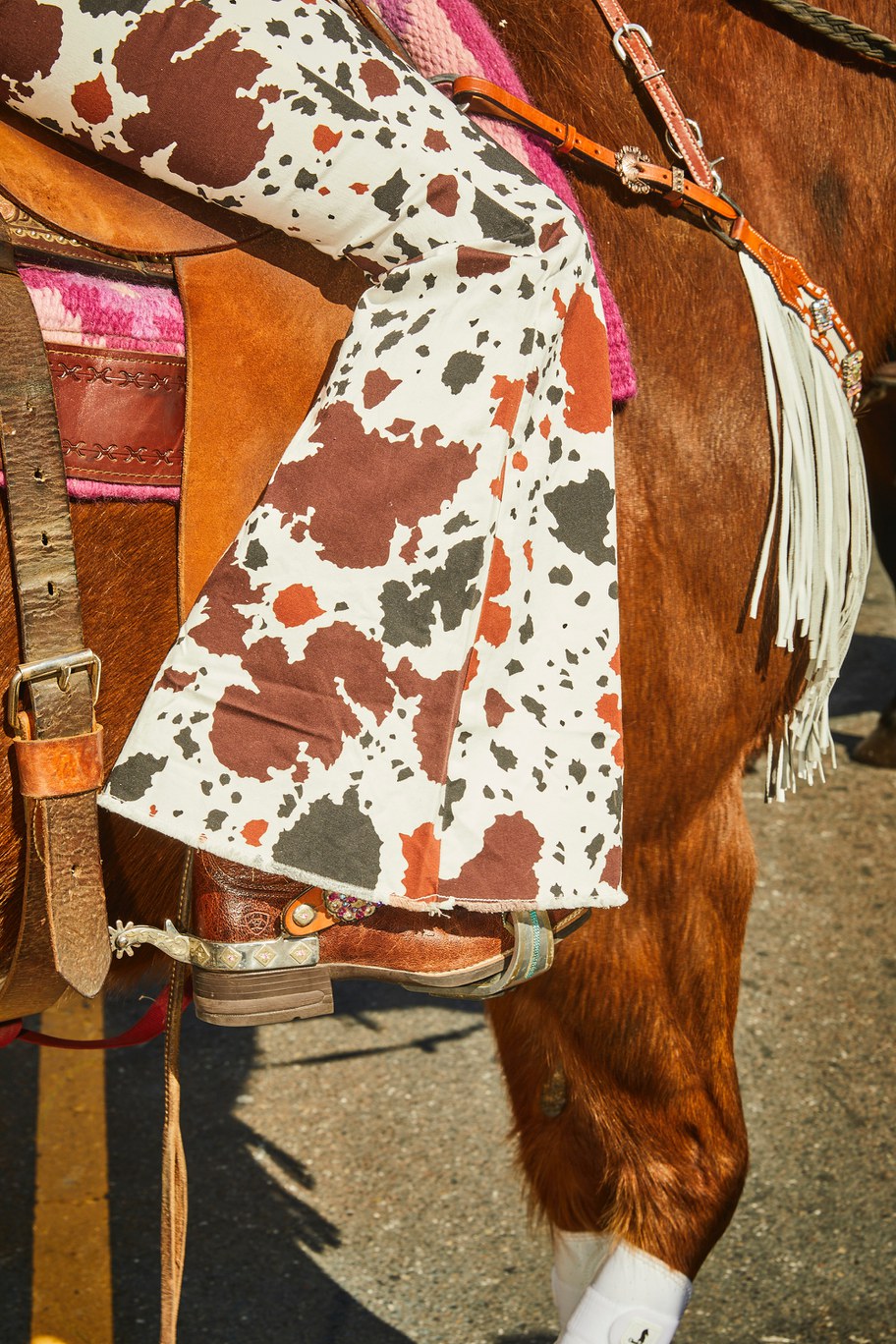 Hasbun says that creating a sense of Black pride and Black heritage is central to the Bill Pickett Invitational.

“[They] really do an amazing job at highlighting the national Black anthem, the Black flag, and just really highlighting these important historical and community things that we don't see on a day-to-day basis at our schools [and] in our communities,” Hasbun says. 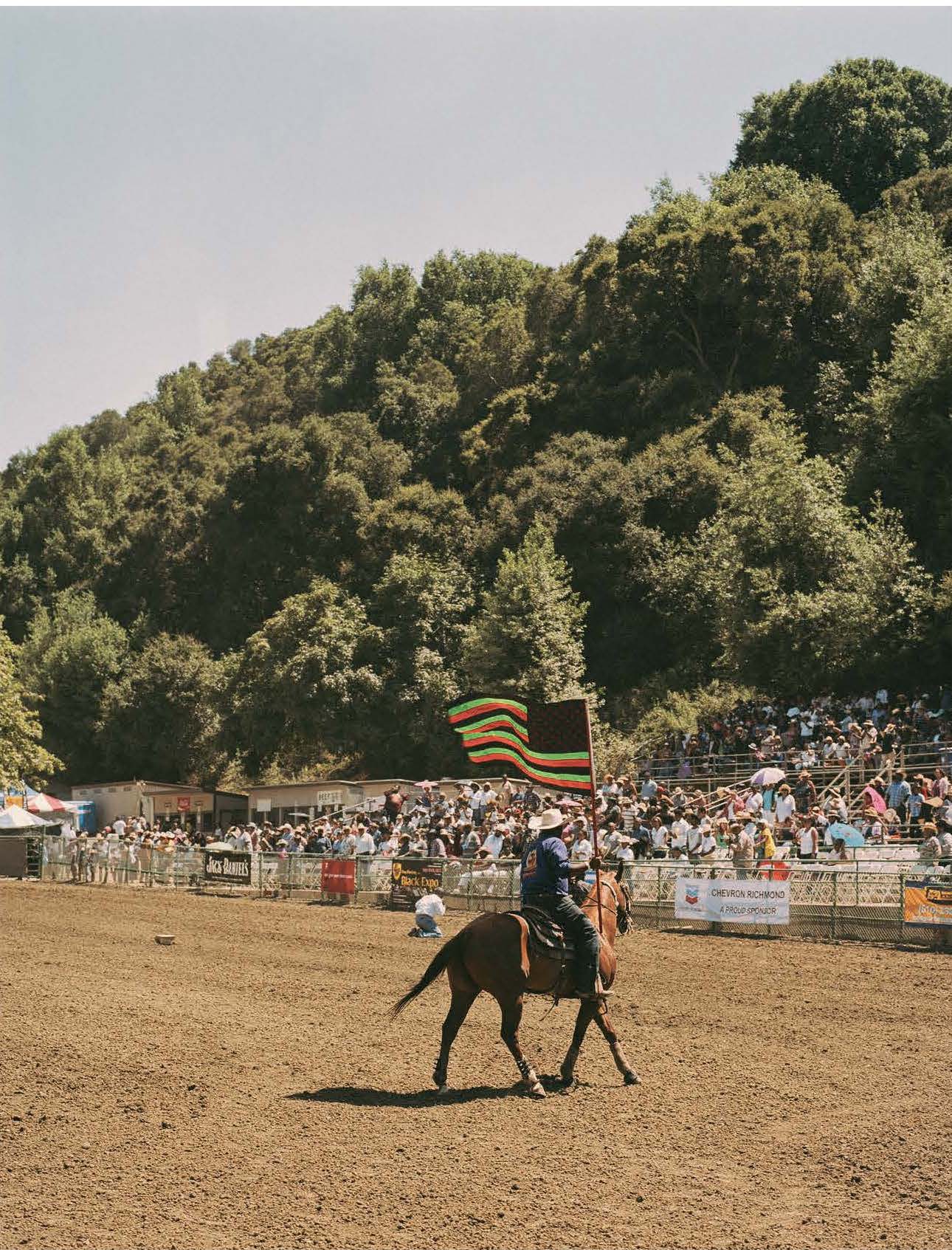 Central to the Bill Pickett Invitational is emphasizing the importance of Black pride.“[They] really do an amazing job at highlighting the national Black anthem, the Black flag, and just really highlighting these important historical and community things that we don't see on a day-to-day basis at our schools [and] in our communities,” says photographer Gabriela Hasbun. Photo by Gabriela Hasbun.

She adds, “For me, this was an education, and that's what they want to instill in the younger kids. I feel like they really just want to remind them where they come from and what their history is.”

Creating a safe and unique space for inner-city kids

Brinson says that entering the rodeo world was therapeutic for her. As a kid from West Oakland, she says there weren't many unique opportunities for her and her peers. When she got too tall for gymnastics, Brinson says horse riding changed her life.

“It was a remarkable moment. Still to this day, it leaves an impact on me. When I get off work, I go straight to my horses. I take care of my priorities, go home, go to sleep, and repeat. If I didn't have horses in my life, I actually don't know where I would be at this moment. I really don't know.” 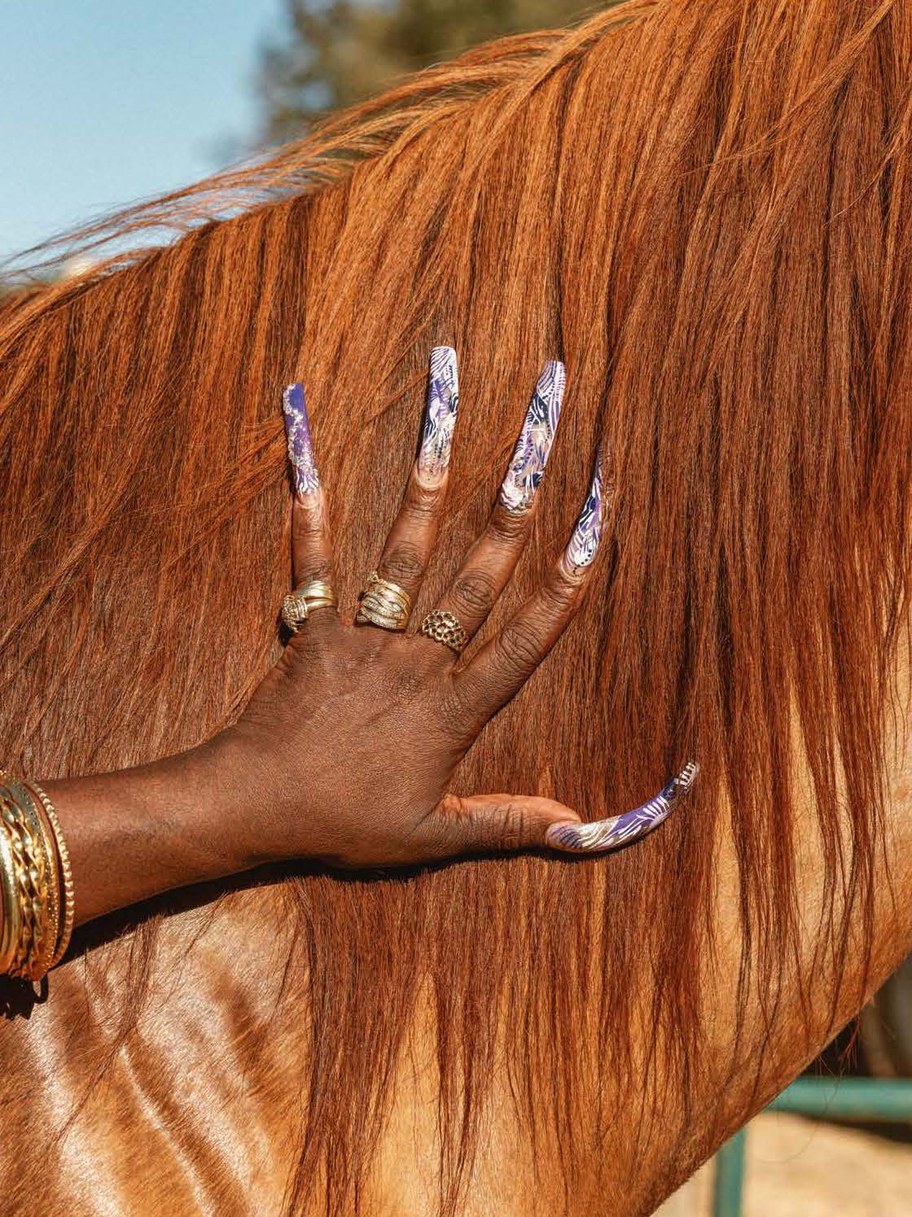 Style is taken seriously even among spectators. Photo by Gabriela Hasbun.

One year, Brinson stuck around after the rodeo to let fans ride her horse. A young girl called her a Black princess and said she wanted to be like her when she grew up. It was a meaningful moment.

“It warms my heart when a child says, ‘I've never seen this before. I want to be like you. You're a Black princess.’ And it's like, ‘Wow!’ You never think of that, especially when you're doing something that — I wouldn't say it's like, not normal — [but] to hear a female from Oakland, California say, ‘I’m a barrel racer and I ride horses.’ And then they're like, ‘What?’”

LA County has received some 7,000 monkeypox vaccine doses from the federal government. With COVID still spreading, can the public health system fight a second virus?

“The New Black West” is a photography book that highlights Black cowboys and cowgirls in the Bay Area. Photographer Gabriela Hasbun says this is one of the safest, warmest,...

‘The Gray Man’ tries to give emotional depth, mostly about fights, says critic

Critics review new movie releases: “Where The Crawdads Sing,” “Mrs Harris Goes to Paris,” “Murina,” “The Gray Man,” and “Paws Of Fury: The Legend Of Hank.”

Could Dodgers’ ‘amazing alchemy’ lead them to World Series?

Dodger Stadium will host the All-Star game next week, and UCLA and USC are joining the Big Ten Conference.