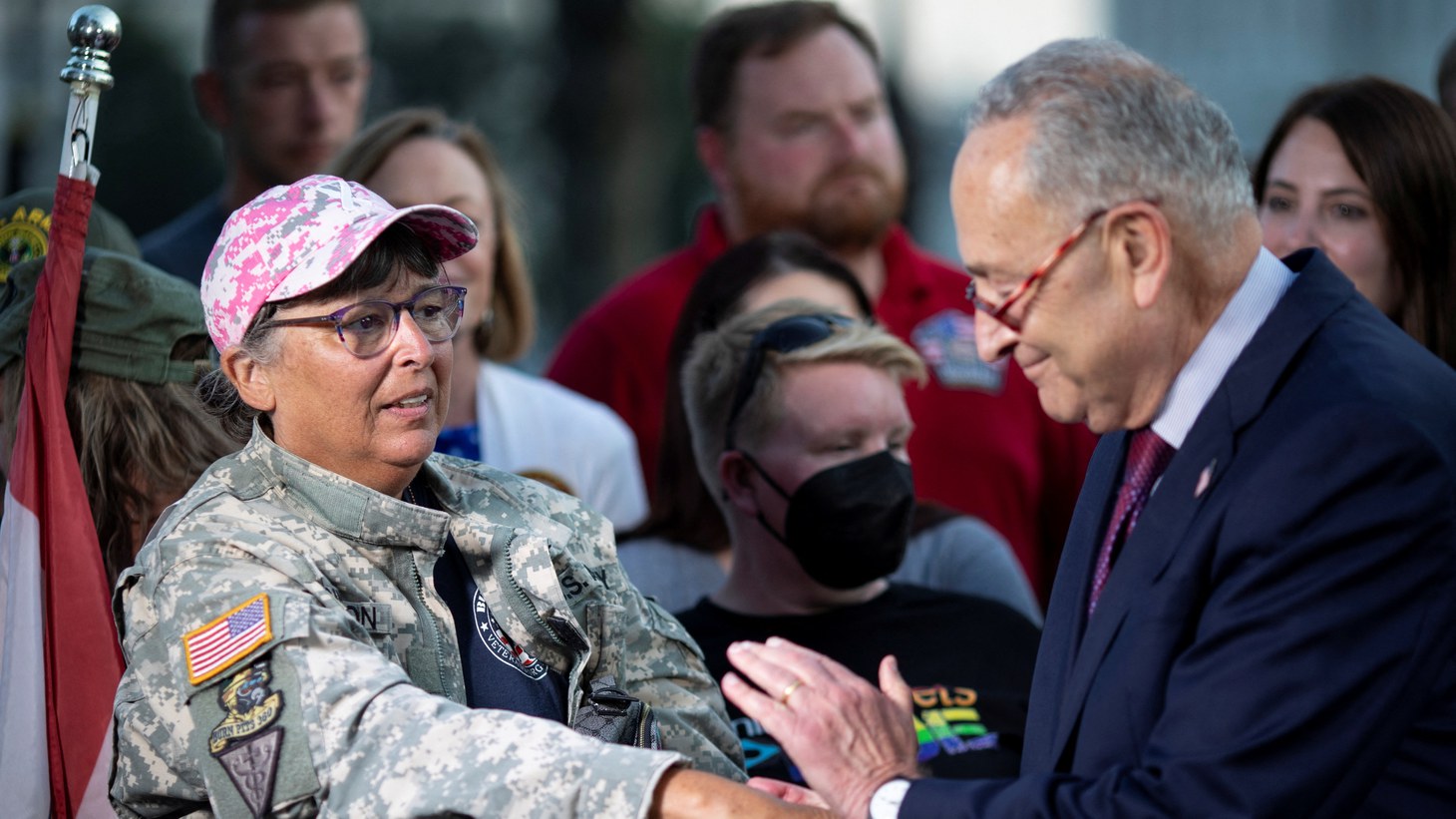 Senate Majority Leader Chuck Schumer (D-NY) embraces a veteran during a news conference, following the completion of a vote on the Promise to Address Comprehensive Toxics (PACT) Act on Capitol Hill in Washington, U.S., August 2, 2022. Photo by REUTERS/Tom Brenner.

On Tuesday the Senate approved the Promise to Address Comprehensive Toxics (PACT) Act, which would help veterans struggling with health problems after being exposed to toxic chemicals mainly in Iraq and Afghanistan.

Republicans had blocked it after Democrats won other, unrelated victories last week. Veterans were outraged, so Republicans backtracked, and now the bill is expected to be signed into law by President Biden.

“This bill basically will provide an immediate medical service for veterans who come down with a known list of 23 cancers due to their military service in the Middle East,” explains Andrew Myatt, an Army and National Guard veteran who developed multiple cancers after serving in the Middle East. The list includes respiratory-related conditions, and family members of veterans who died from those conditions can also receive benefits.

Myatt says he was fortunate to have private health insurance. Without it, he likely would have died.

“My insurance paid out, I think, $3.5 million by the time I had stopped counting for my treatment. So that would crush a regular human being if you were having to try to figure out what to pay for that,” he shares.

Myatt says he believes he got his cancer from being exposed to burn pits. “If you've ever been in the Middle East, the primary method of getting rid of refuse is just setting it on fire. … Everywhere you go, there's something burning, and then you throw 100,000 combat soldiers on top of that. …  With the amount of water we're drinking, it was a half million empty plastic bottles a day that had to be destroyed. … Where you slept, where you drove, where you were fighting, there was something burning.”

He emphasizes one of the most important things about the PACT Act: “If you do 20 years in the military, more likely you're getting out of the military when you're 38 to 43 years old. And you've been actively exercising and in good health. The last thing you're thinking about is coming down with some crazy cancer, so yeah, this bill is very important as far as when these things do come out of the blue … then you can actually go somewhere to get help.”

He explains that at the VA, veterans had to prove that their burn pit exposure was the cause of their cancer(s). Now that burden of proof is gone. “That was the giant hurdle that nobody could get over. Because we're not scientists. And I don't have 20 years of empirical studies on if burning X causes Y.”