“Star Trek: Exploring New Worlds” includes set pieces and props from the series, including Captain Kirk’s chair, a tunic worn by Spock in one of the “Star Trek” films, and the main navigation console from the bridge of the USS Enterprise. Photo by Robert Wedemeyer.

“Star Trek: The Original Series” debuted in 1966 and ran for three seasons. Since then, the franchise is constantly being reimagined. It's given birth to nine spin-off shows and more than a dozen movies. What did series creator Gene Roddenberry stumble upon that captured so many generations of fans? A new exhibit at the Skirball Cultural Center examines why “Star Trek” is an iconic piece of television history. It runs from October 7, 2021 to February 20, 2022.

Curator Laura Mart says the Skirball — a Jewish institution — aims to highlight programming that connects with Jewish values such as inclusion, optimism, discovery, and hope. And because those values are at the core of “Star Trek,” she says it made sense to introduce an exhibit that showcases the show’s legacy.

“People love ‘Star Trek’ because they see themselves in ‘Star Trek’ … one of the first shows to really present an inclusive cast. Nichelle Nichols was the first Black woman in a leadership role on television,” she tells KCRW. “It had George Takei as Lieutenant Sulu, who was a Japanese American on screen at a time when there was still a lot of leftover anti-Asian sentiment after World War II. You had a Russian on screen during the Cold War. There was that kind of inclusion of earthly different groups from Earth, who were at the time not necessarily getting along super well.”

She adds that the 1960s were a polarized time, when the U.S. was grappling with the Vietnam War and the Civil Rights movement.

“There's always been an element of wonder, but also of hope, of optimism,” she says. “‘Star Trek’ gave people something to be hopeful about for the future. Here you had people having overcome some pretty serious challenges [like] war and conflict. And finally people on earth had gotten their act together and created this utopian society. They'd made contact with other interplanetary cultures and formed alliances.”

“Star Trek: The Original Series” is also known for depicting one of the first interracial kisses on television. Set in season three of the show, the kiss between Captain Kirk (played by William Shatner) and Lieutenant Uhura (portrayed by Nichelle Nichols) had never been seen on television before. Because of its subject matter, Mart says many TV stations in the South did not air the episode — or threatened to not air it.

But according to Mart, the kiss was initially supposed to take place between Spock (portrayed by Leonard Nimoy) and Uhura. “The story goes that William Shatner read the script and he said, “Oh, no, no, if anyone gets to kiss Nichelle Nichols, it's going to be me. If anyone kisses Lieutenant Uhura, it's going to be Captain Kirk,’” she explains.

Set pieces and props from the series are part of the exhibit, including Captain Kirk’s chair, a tunic worn by Spock in one of the “Star Trek” films, and the main navigation console from the bridge of the USS Enterprise. 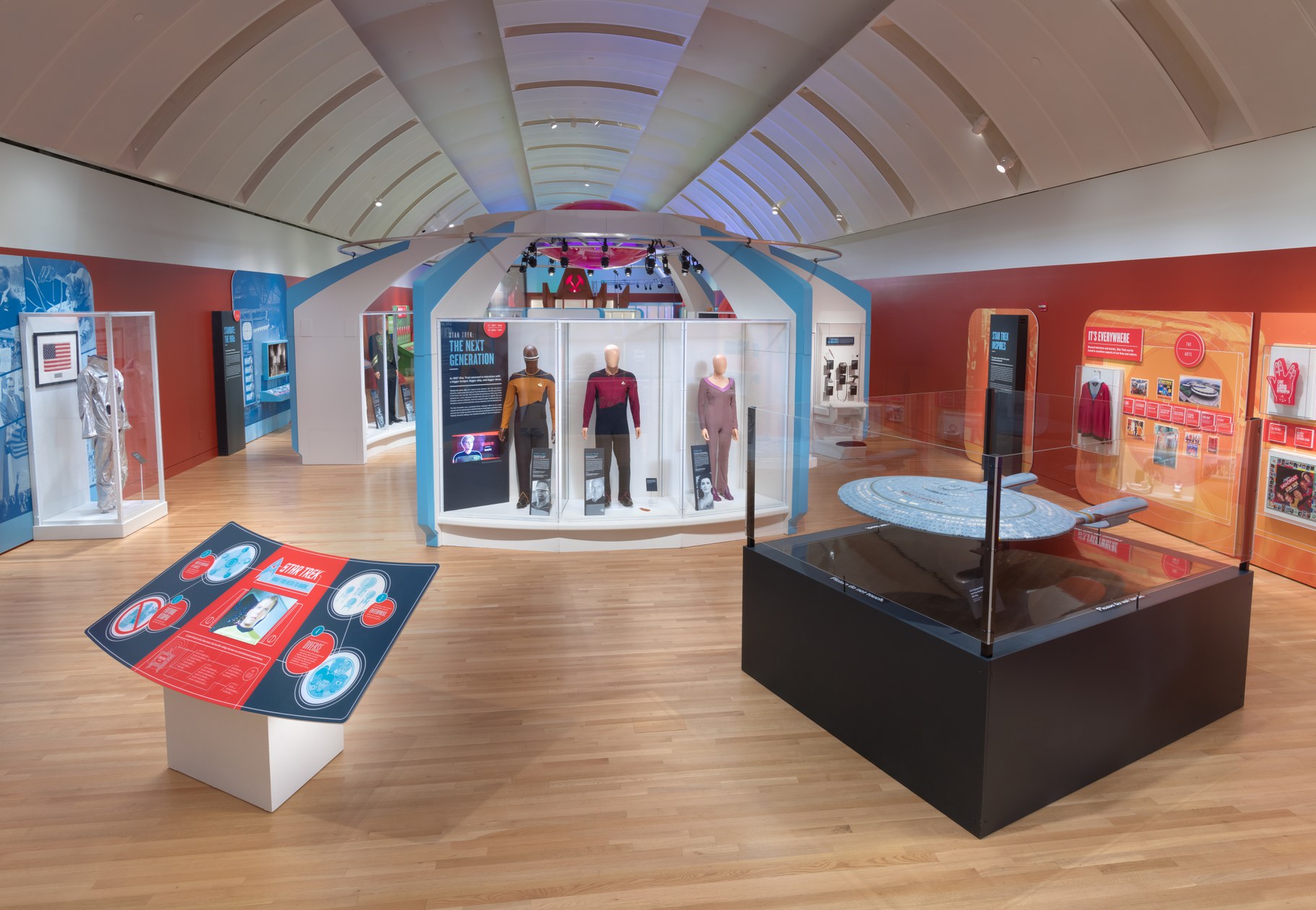 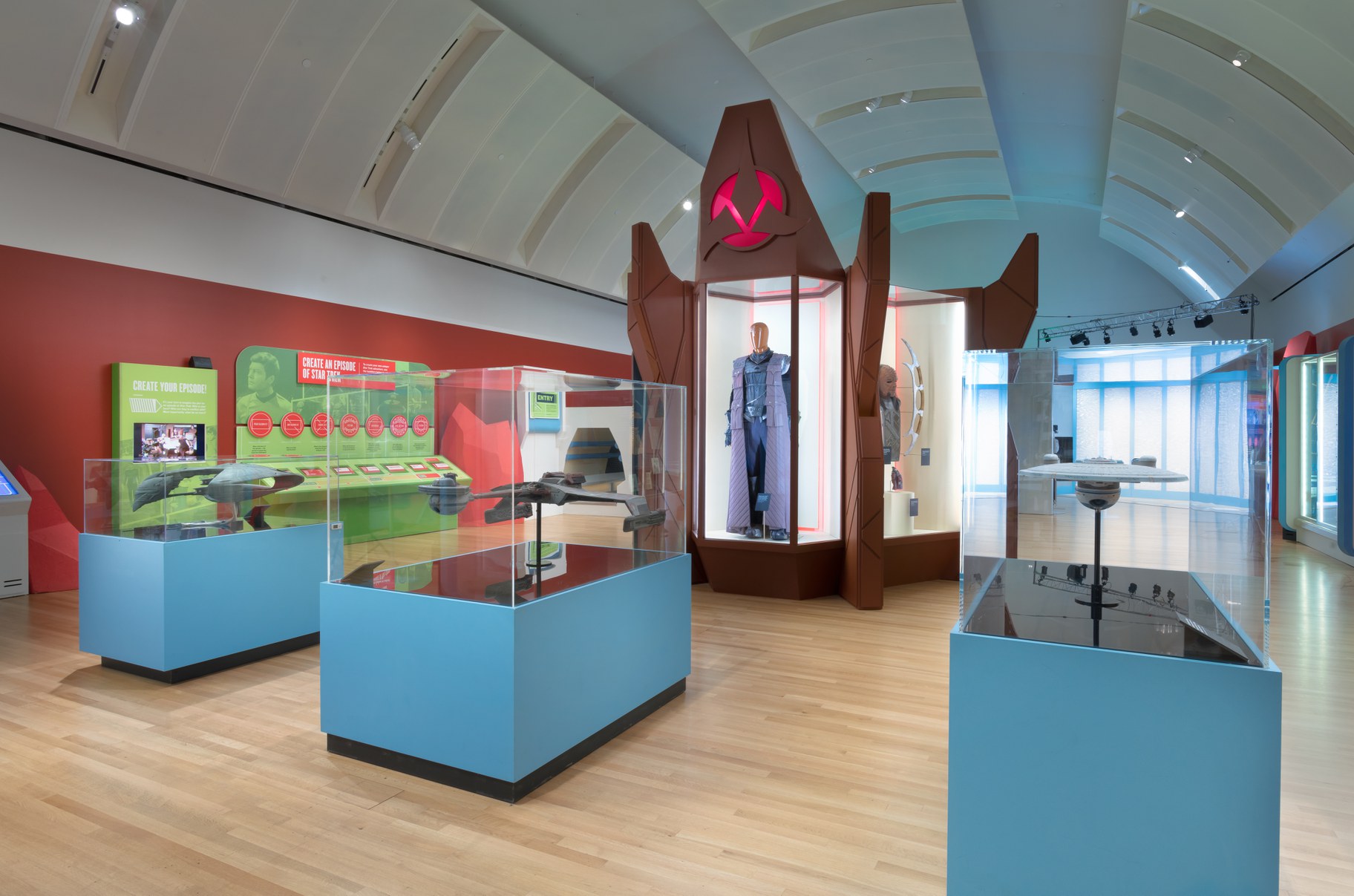 The “Star Trek” exhibit at the Skirball Cultural Center runs through February 20, 2022. Photo by Robert Wedemeyer.

Although the years haven’t been kind to the console — the 1960s set piece is made out of plywood and the paint is chipped — Mart says it tells a fascinating story of how vintage Hollywood props used to be treated and how they’re regarded by fans.

After its use on the show, she says the console was bought by a die-hard “Star Trek” fan who worked on restoring the set piece.

“This even included going so far as to carefully watch episodes of the original series and noted the timing of each light’s blink pattern and programmed at all to blink in just the correct manner. And I think that really says a lot about how passionate ‘Star Trek’ fans are about what they love, right? ‘Star Trek’ is really, I don't want to use the word obsession, but in some cases it might rise to that level. There's … an attention to detail, a love, and a care that ‘Star Trek’ fans have.”