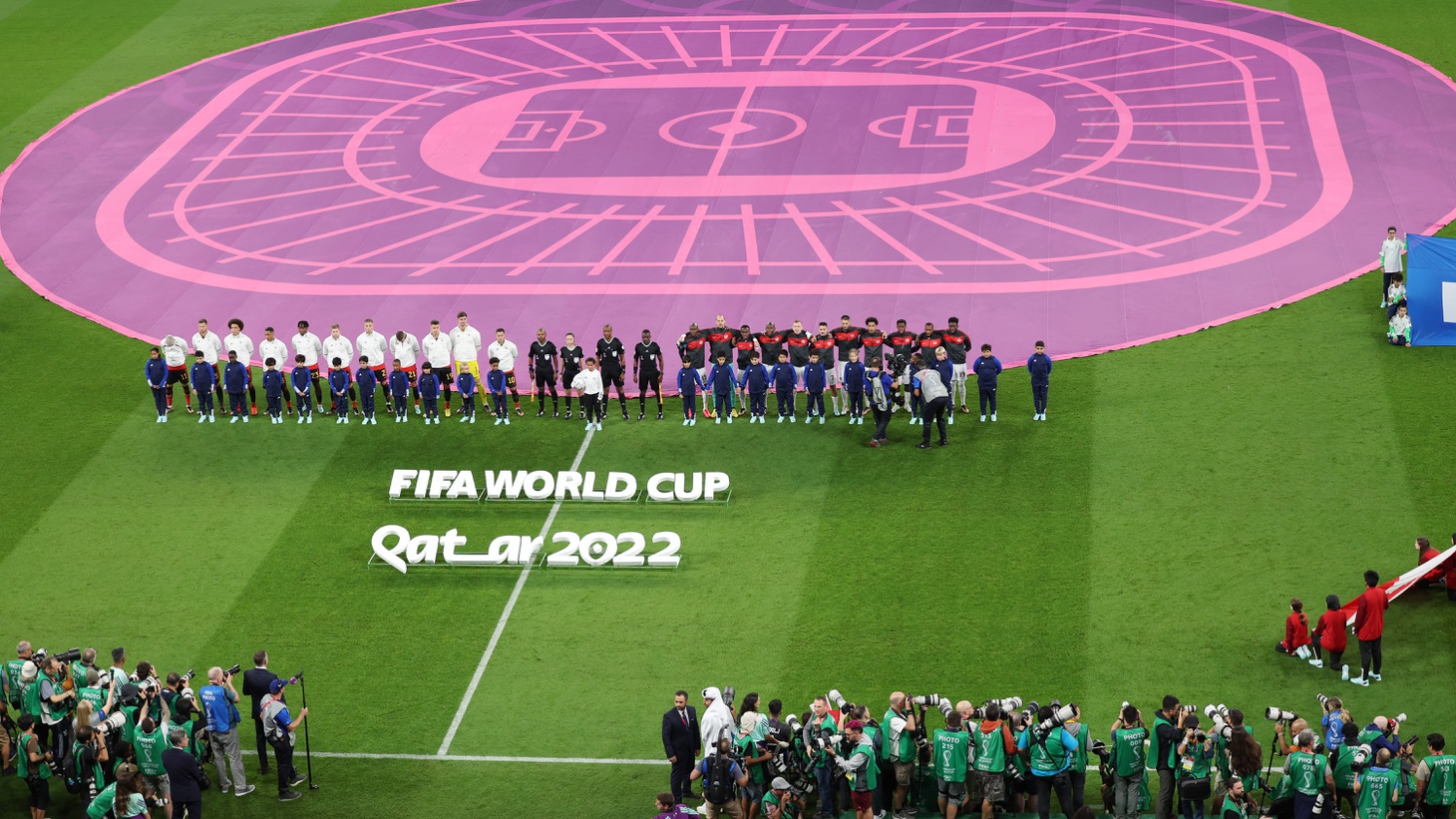 Belgium and Canada teams line up before their match at Ahmad Bin Ali Stadium in Qatar, November 23, 2022. “The Qatari regime is controlling this tournament and showing it in moments like two days before the tournament saying, ‘Oh, actually, after 12 years of preparations, we're not going to allow beer in the stadiums.’ It's less about the beer, in my opinion, than it is about the Qataris showing they can move the goalposts; that they can control a number of things, and that no matter what FIFA says, that's not something that FIFA can guarantee,” says Grant Wahl, U.S. soccer writer for CBS sports. Photo by Molly Darlington/Reuters.

The 2022 FIFA World Cup in Qatar has so far included shocking upsets that stunned fans. Argentina fell to Saudi Arabia, while Germany lost to Japan. There’s also plenty of drama off-field. Right before the World Cup began, Qatar banned beer sales at the tournament’s eight stadiums, reversing an earlier decision to allow it. Before today’s game, Germany’s starting line-up placed their hands over their mouths during a team photo — protesting FIFA’s threat to penalize the captains of European teams who planned to wear rainbow armbands in support of LGBTQ rights. Homosexuality is illegal in Qatar.

American journalist Grant Wahl says he was detained by stadium security for wearing a shirt with a soccer ball surrounded by a rainbow.

Wahl says he was stopped at the media checkpoint entrance at the United States-Wales match. They told him that if he didn’t remove the shirt, he wouldn’t be allowed in. He then took a selfie and posted it on Twitter. Wahl says his cell phone was then forcibly taken by security, who refused to return it for nearly half an hour.

“At one point, a security guard came over and stood right above me, very threatening and angry, said, ‘You must take off your shirt.’ And I said again no. Then they made me stand up and turn and face a closed circuit TV camera above us. I guess there was someone on the other end. … Finally after about 25-30 minutes, a security commander appears and tells me I can go on in and I can keep my shirt on.”

Wahl says the commander apologized for the interaction, stating there was a language problem among guards who didn’t speak English well. He says another guard told him that he was trying to protect Wahl from people harming him inside the stadium. Eventually, someone from FIFA apologized to Wahl.

He says World Cup Qatar is an example of sports washing — where entities use sports for good publicity.

“David Beckham is making more than $200 million from the state of Qatar to be an ambassador for Qatar right now. Fox Sports in the U.S. is being paid millions of dollars by Qatar through sponsorships for Qatar Airways and the Qatar Foundation on the Fox broadcast in the U.S. Fox has said very publicly, ‘We're not going to touch any of this stuff about human rights in Qatar.’ And I've been watching their broadcast — it’s sports washing. It's embarrassing.”

Wahl adds that FIFA’s move to threaten players with a yellow card for wearing the “One Love” armband is proof that the organization doesn’t have control over the tournament.

“In many ways, the Qatari regime is controlling this tournament and showing it in moments like two days before the tournament saying, ‘Oh, actually, after 12 years of preparations, we're not going to allow beer in the stadiums.’ It's less about the beer, in my opinion, than it is about the Qataris showing they can move the goalposts. That they can control a number of things, and that no matter what FIFA says, that's not something that FIFA can guarantee.”

He adds, “The ability to wear a rainbow shirt, that’s about human rights. If Qatar is going to crack down on gay people who come to visit a World Cup, there's going to be a problem. Even FIFA said that. And obviously, FIFA shouldn't have put the World Cup here. The whole thing has been corrupt. And here we are. And it's actually gone, probably, worse for Qatar in the first week than people even expected.”

On the match upsets

Wahl is astounded by Argentina’s 1-2 loss in its match against Saudi Arabia. He says the South American team went 36 games without a loss leading up to the competition.

“They've got Lionel Messi, who I still think is the best player in the world, or at least has had the best career of anyone currently playing. And they lost. It's one of the things I love about the World Cup. … You never know what might happen. Saudi Arabia winning? That's a little bit like in the NCAA basketball tournament, a 15 seed beating a two seed.”

This year, many Black Friday, Small Business Saturday, and Cyber Monday deals have already started. What’s going on, and are they any good?

Some of the country’s top law schools are pulling out of U.S. News and World Report’s rankings, which critics say penalize schools.