“He [Jeff Bezos] wanted to be a successful entrepreneur. He was selling books, not because he had a passion for reading — which he did actually — but because it was tactical, it was a beachhead for further expansion. His vision was to have a store where he could sell everything,” says Brad Stone, author of “Amazon Unbound.” Photo credit: Annegret Hilse / SVEN SIMON via www.imago-images.de.

Amazon has come a long way from its roots in a small garage in Bellevue, Washington in 1994. Originally, it sold books. Now it’s also a cloud computing company, a grocery store chain, a home security company, and a movie studio. It’s worth $1.7 trillion.

On July 5, founder Jeff Bezos will step down as CEO. He will remain as the company’s executive chairman. But how did the company get so big?

Bezos could see the possibility of the internet marketplace, says Brad Stone, author of “Amazon Unbound: Jeff Bezos and the Invention of a Global Empire.”

“He wanted to be a successful entrepreneur. He was selling books, not because he had a passion for reading — which he did actually — but because it was tactical, it was a beachhead for further expansion,” Stone says. “His vision was to have a store where he could sell everything.”

He describes Amazon as a boulder rolling down a hill, with nothing able to stop it.

“He's been not just prescient every step of the way, but really aggressive about it. I describe him in the book as basically the most aggressive gambler at the craps table, and always willing to bet on the power and the opportunity of the internet.”

While Bezos steps down as Amazon’s CEO, he’ll likely focus more on his philanthropy and space exploration endeavors, says Stone. He will be part of the first crewed mission to space in a ship created by his company Blue Origin. 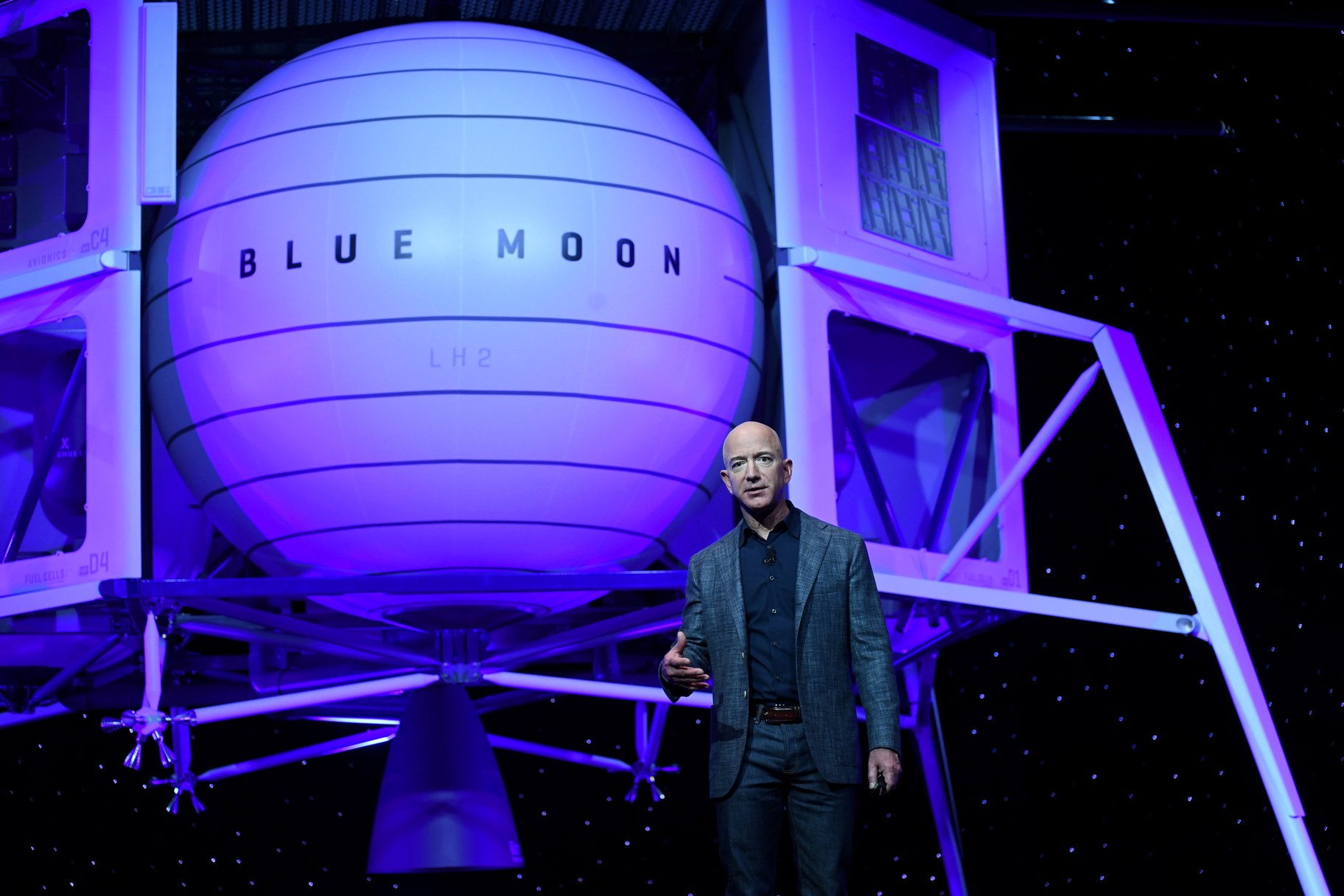 “The space trip is almost unbelievable, right? He's taking the very first crewed mission [in a spacecraft that is untested in] carrying actual human passengers,” Stone says. “Spending more time with his space passions definitely will loom large. I write about Blue Origin. It is a company that is struggling right now. He has spent billions of dollars over 20 years without much to show for it.”

The global addiction to Amazon

The communal obsession with Amazon can be traced to how easy it is to use services and buy goods, says Christine Whelan, a clinical professor of consumer science at the University of Wisconsin at Madison.

“In the world of consumer spending, when you can make it easier, people spend more money. So it really is sort of a genius product for Amazon. Once I put my credit card in, then I don't have to ever do it again. It's a one-swipe shopping experience,” she says. “It really creates brand loyalty when things arrive quickly. And you feel like you're saving money because it arrives free after you pay off your Amazon Prime subscription.” 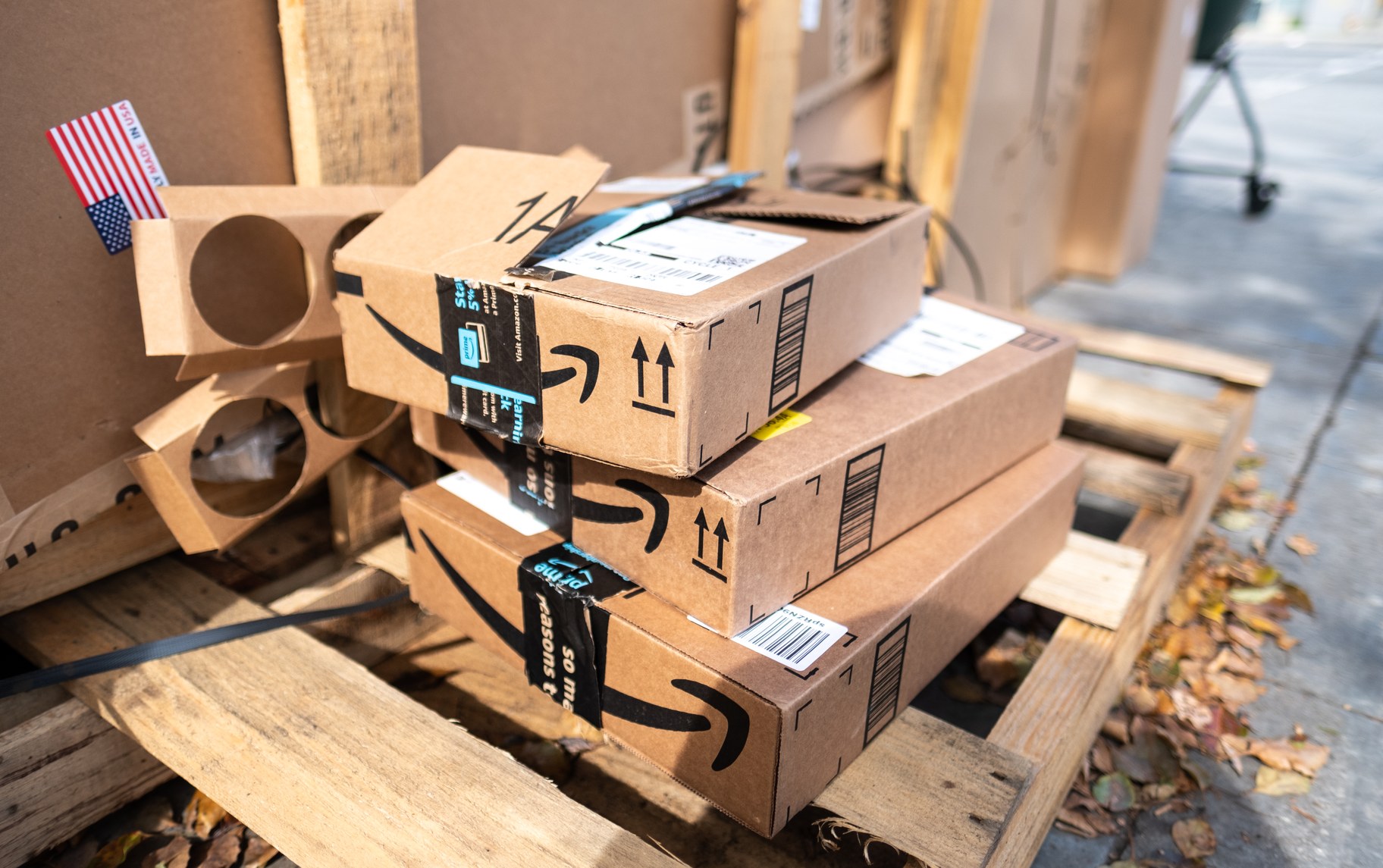 Whelan points out that the brown Amazon box provides anonymity for its customers and feeds into consumer addiction.

“It is frictionless, both in terms of your time, in terms of your effort, in terms of any psychological cognitive dissonance about making the purchase,” Whelan says. “It very much feeds … this idea of the hedonic treadmill, where we are constantly trying to buy the next thing and feed the next urge. We're never satisfied, we're always looking for the next hit.”

The Atlantic editor Ellen Cushing argues that Amazon’s business model has habituated its customers to tactics that are tough for other businesses to replicate.

“Amazon pulls it off because it has this vast network of warehouse workers who have reported high [rates of] injuries. It’s a very surveillance-based job. It's a tough job. Many people would argue it's not really a job that is a path to the middle class,” Cushing says. “And then they have this network of delivery drivers, which is similar work. [It’s] not very stable, [workers are] under a lot of pressure to perform.”

How does society wean itself off of Amazon?

Whelan says consumers must remind themselves of their values. “Are we concerned about the environmental impact of all these shipping trucks? If so, is there a way to ameliorate that? And are you in fact willing to sacrifice some of the benefits of getting things faster?”

She says it’s important to note that humans are poor judges of what will make them happy. “And so buying things immediately and having them delivered immediately, while we think that that is going to make us happy, anticipation is nine-tenths of delight.” 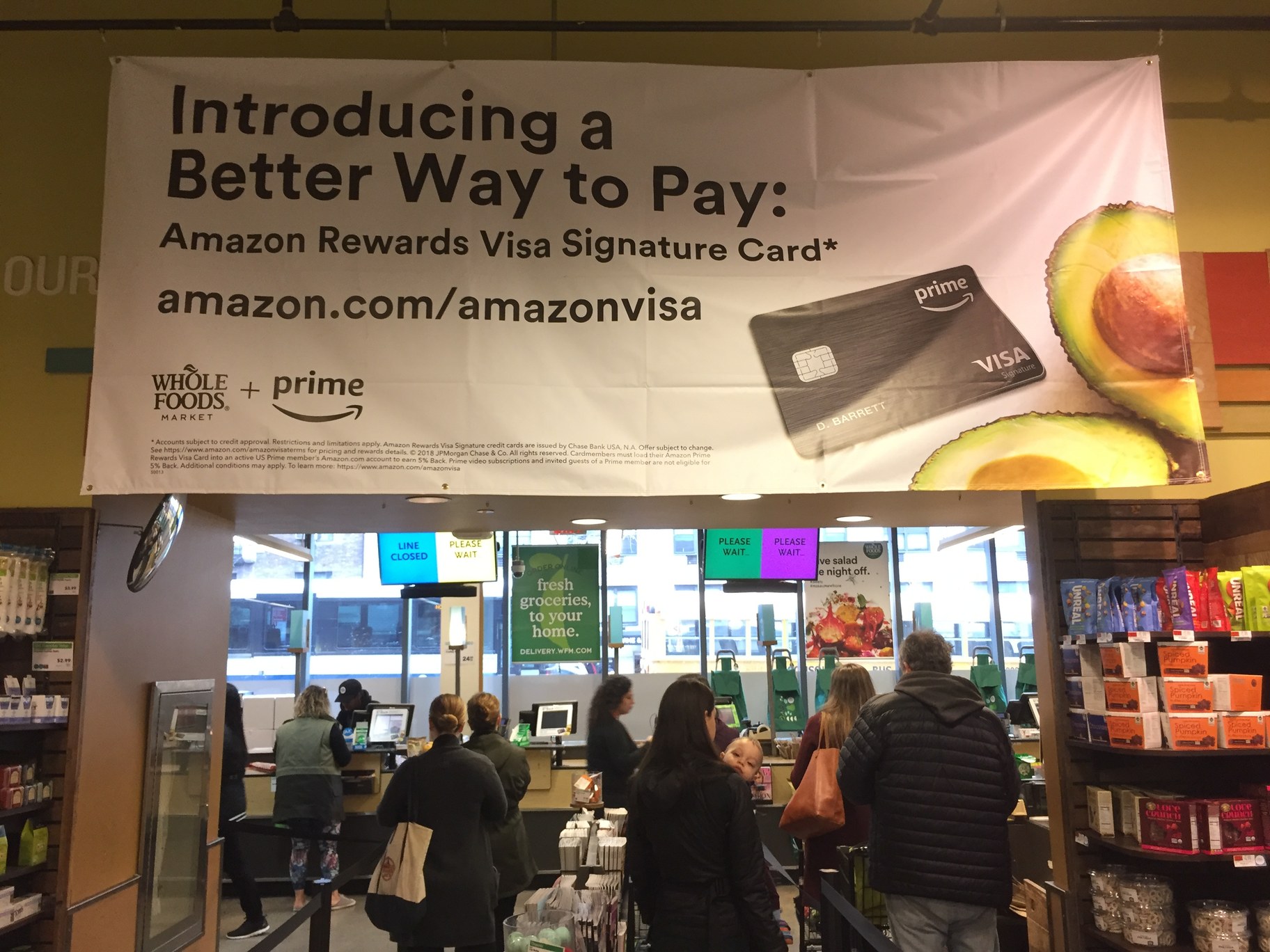 In New York City, a banner advertises getting Amazon rewards by paying with your Visa Signature credit card. Photo by Shutterstock.

Cushing says that during the worst of the COVID-19 pandemic in the U.S, many people turned to Amazon to avoid going out into a potentially deadly world. Now she challenges others to rethink their relationship with the e-commerce company.

The scrutiny around big tech and Amazon

Criticism over Amazon and other big tech companies has mounted over the last few years. More than 50% of Americans want big companies like Amazon to be more regulated, reports a Gallup poll from earlier this year.

People are afraid these large companies will exploit their power and their platforms, says Barry Lynn, executive director of the Open Markets Institute.

He uses the example of Amazon’s cloud computing division AWS, which can track what other businesses are doing and what activities are popular.

“They're using the services that they provide to other companies that are storing their data online to basically spy on those companies. That's a problem.” Lynn says. “Amazon uses its power to favor certain companies over other companies in a rather arbitrary way. And that's actually not how a marketplace is supposed to work.”

As a major book retailer, Lynn says that Amazon can manipulate buyer and seller interactions, and can even affect what the greater society is reading.

“Their system is designed in ways that actually lead them to, day after day, manipulate the interaction between buyers and sellers in ways that doesn't [sic] necessarily serve the buyer. [It] doesn't serve the interests of the seller. It just serves Amazon's interests.”

He adds, “What we now have is a company that's going to encourage you to buy certain books. And they will encourage you using all kinds of different tricks, different kinds of promotions, different kinds of pricing,” he says. “This actually has a larger effect on what we, as a society, think [and] the debates that happen in our society. It has an effect on each of us, because some books that we might actually want to read, maybe we never come across that book.” 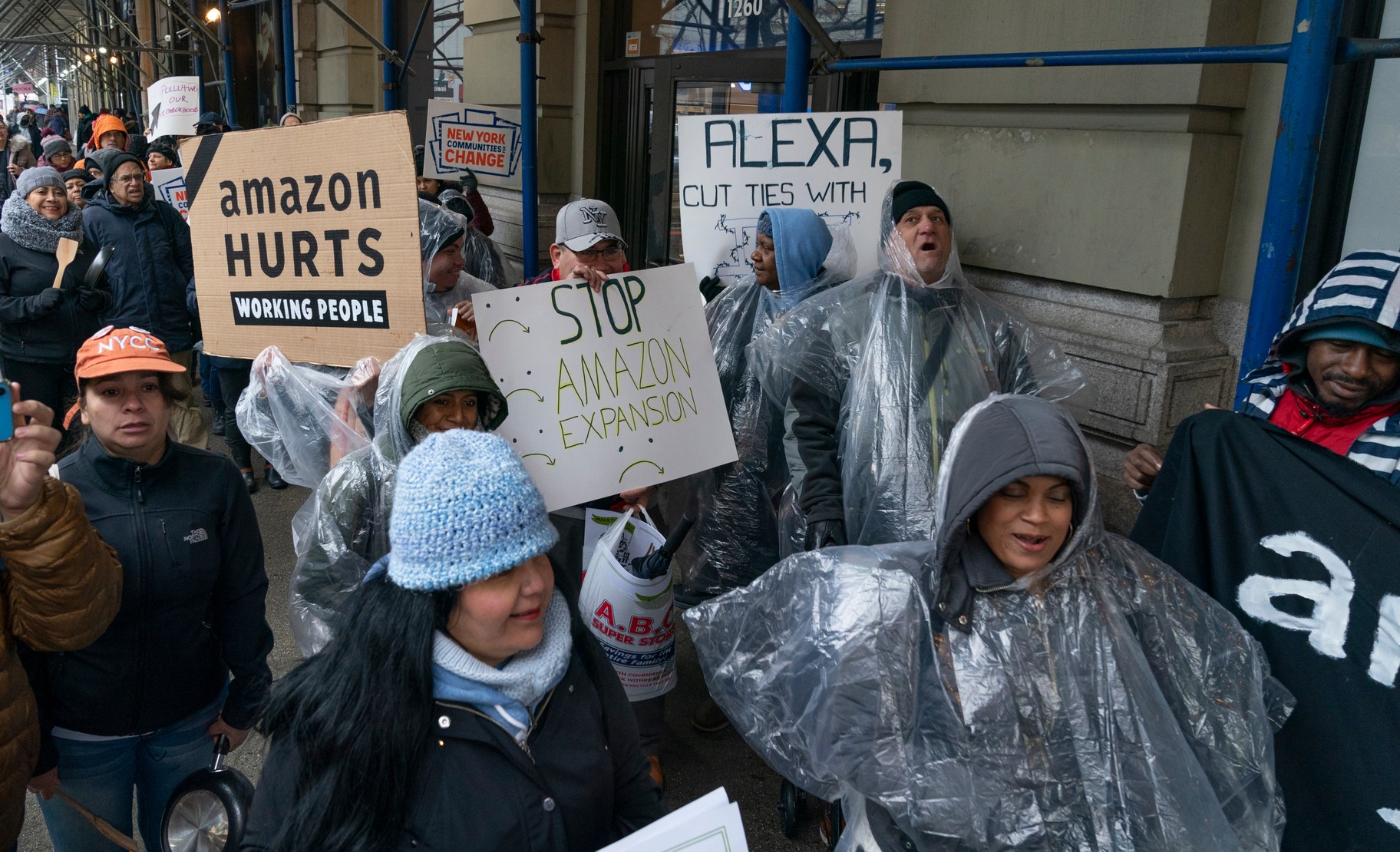 He points out that the monopolistic nature of Amazon isn’t new in American society. This is just the first time big companies are not subject to the typical laws preventing monopolies.

“Now that these corporations are on top of the world … they're using their power to crush all rivals, so they can better exploit us.”

He adds that even if Amazon were broken up into individual corporations, it would still exist and be capable of use by its customers.

“The day after we have broken up certain parts of Amazon, as a customer, you're still going to go on your phone or go online. You can hit a button and you're going to get everything that you ever needed, delivered to your house just as fast as it was the day before,” he explains. “There's not going to be any degradation in service whatsoever from any of these actions. If anything, what we see is more rivalry, more competition and better service coming to us much faster than we get it now, because you have a powerful actor whose interest is often to block new ideas.”