Written by Amy Ta, produced by Brian Hardzinski May. 16, 2022 International 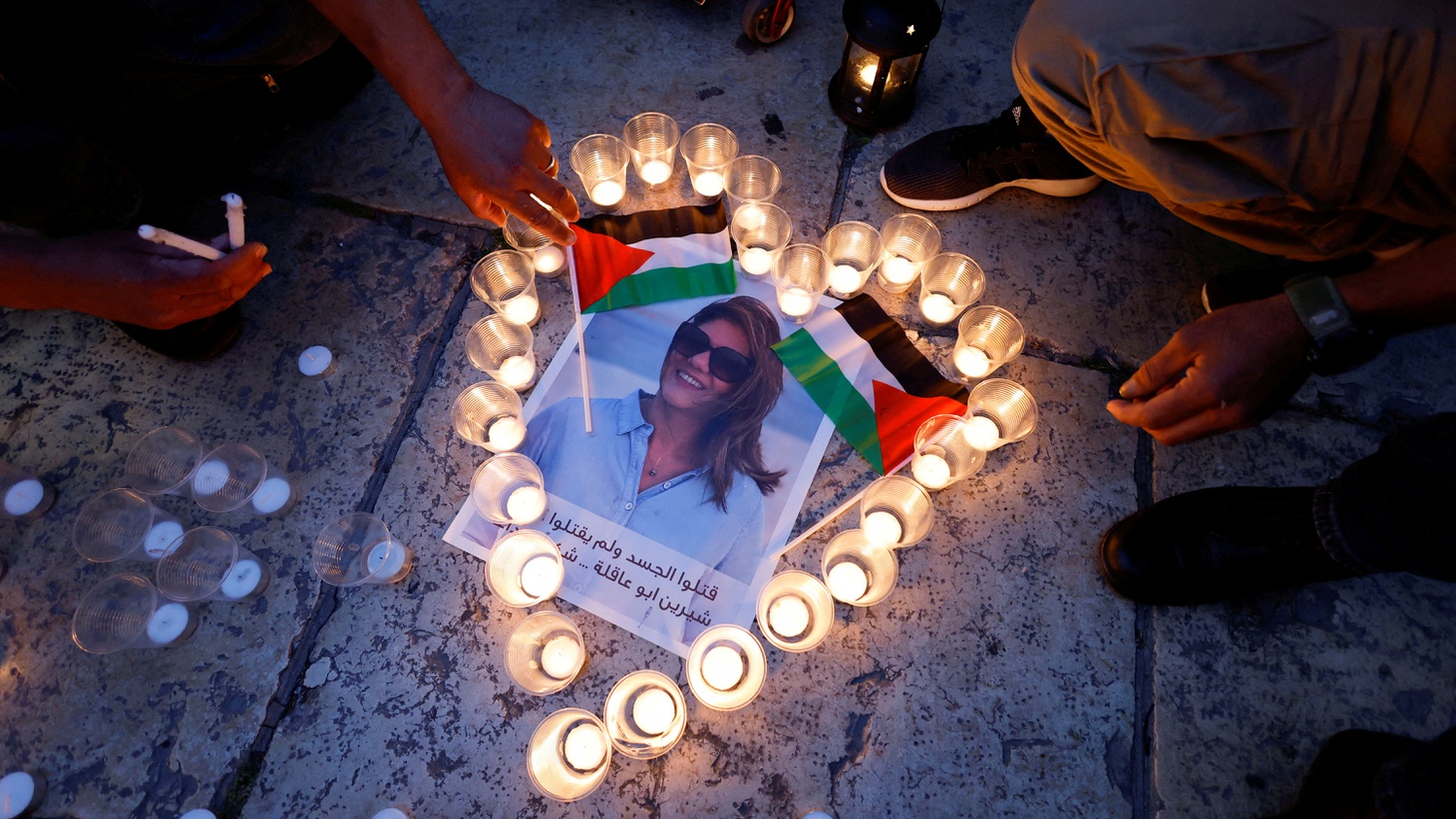 People light candles during a vigil in memory of Al Jazeera journalist Shireen Abu Akleh, who was killed during an Israeli raid, outside the Church of the Nativity in Bethlehem, in the Israeli-occupied West Bank, May 16, 2022. Photo by REUTERS/Mussa Qawasma.

Israeli police say they plan to investigate how the funeral of a prominent Palestinian journalist turned violent last week. Shireen Abu Akleh was a household name in the Middle East, spending more than two decades covering stories from occupied Palestinian territory. She was fatally shot while covering an Israeli raid on a refugee camp in the West Bank. Palestinian officials and witnesses say she was shot by Israeli army fire, and Israeli officials now acknowledge that’s possible. On Friday, as thousands gathered to mourn her, they were beaten and attacked by Israeli police, causing pallbearers to almost drop the casket.

“Shireen is the kind of journalist that managed somehow, magically, grandly, professionally to gather everybody around her,” says Rania Zabaneh, producer for Al Jazeera English in the West Bank. “She was a person who was smart, humble, professional, down to earth. She was at peace with herself. She loved what she did. And I think people can see through that.”

Zabaneh says Abu Akleh always looked for the human side of the story, and spoke to people on the streets handfirst. She loved what she did, and wouldn’t let anyone else do the work for her.

Zabaneh personally learned a lot from Abu Akleh too, and says she’s humbled and proud to have worked with her.

“Knowing Shareen, anybody would tell you that any story she'd embark on, she'd do a mini PhD on the side to work on that story. She didn't only rely on her charisma and her character and her language. She'd also do the research old-school style.”

Palestinian journalist Jalal Abukhater says he knew of Abu Akleh since he was 7. Then as an adult, his father (who’s also a journalist) introduced her to him.

“I felt safety in her presence. She'd be doing her job for Al Jazeera. I would be covering events for different outlets or trying to report on my own. But I always felt inspired by her presence wherever she was on the field. Whenever I was on the same spot with her, I'd feel this support and inspiration,” he says.

Looking back on the day Abu Akleh was fatally shot while reporting, Zabaneh says video footage shows that she received the bullet near her ear, which was the only area uncovered by her helmet. She adds that Abu Akleh had been a very cautious journalist who was never previously injured on the job.

Meanwhile, Israel says it wants a joint investigation, but Palestinian officials haven't agreed to turn over the bullet they retrieved. Zabaneh doesn’t believe such a probe would be possible, nor should it be, she says. “The criminal shouldn't investigate himself.”

She emphasizes that Palestinian journalists have lost many colleagues over the years, but they — and Al Jazeera — will not be silenced. “We'll carry on telling the story. And the burden is definitely much heavier now, but the urge and the drive is much stronger than before.