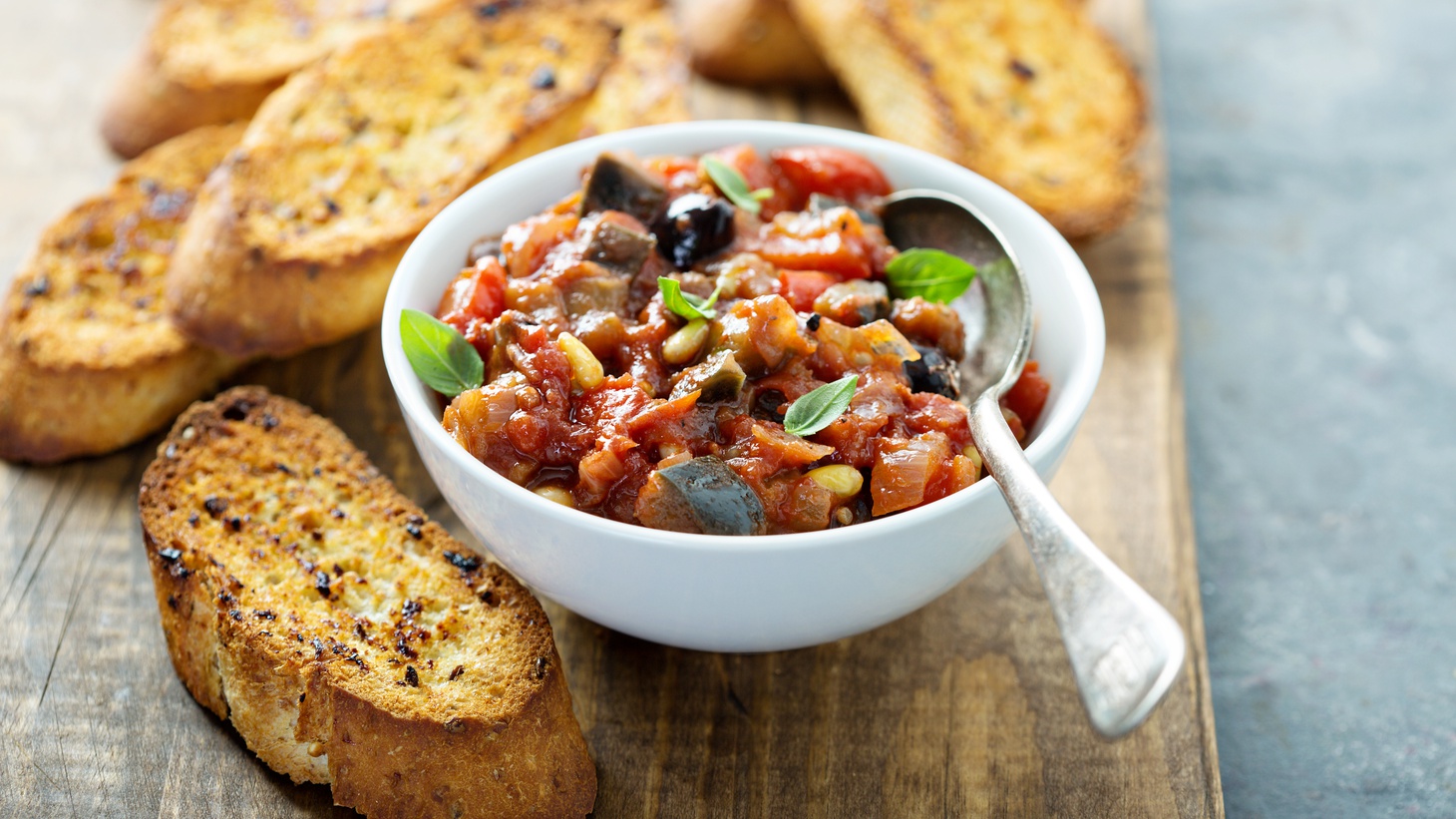 Caponata is a sweet and sour Sicilian vegetable dish that’s an ode to the purple orb. Photo by Shutterstock.

We recently talked about sweet peppers. This week we’re embracing another late summer crop, eggplant. Just the other day I was at Jon’s Market on Santa Monica Boulevard, and there were three varieties of eggplant on offer. It reminded me that it was time to make caponata, the sweet and sour Sicilian vegetable dish that’s an ode to the purple orb.

That said, if you are a farmers market shopper and you see a table with a large pink to lavender Rosa Alba eggplant, feel free to buy it. They have a lovely yielding texture when cooked and no bitterness. Caponata is lovely as part of an antipasti spread also known as a charcuterie board, or good on its own as a satisfying starter served with crackers. I enjoy it as a light lunch or dinner served atop bruschetta with a crisp salad on the side. If I make too much, eventually I’ll toss it into some pasta topped with good quality grated pecorino.

Because of eggplant’s relatively subtle flavor, the texture is all important. Your first step is to choose good quality eggplants. The skin should be smooth and shiny and they should feel firm but not as hard as a rock. The color, whatever it is, should be vibrant, not muted. The stem must be green and firm with no trace of mold softness. You might think that there is little difference between a farmers market eggplant and one from the grocery store but you would be wrong. It’s all about the freshness. 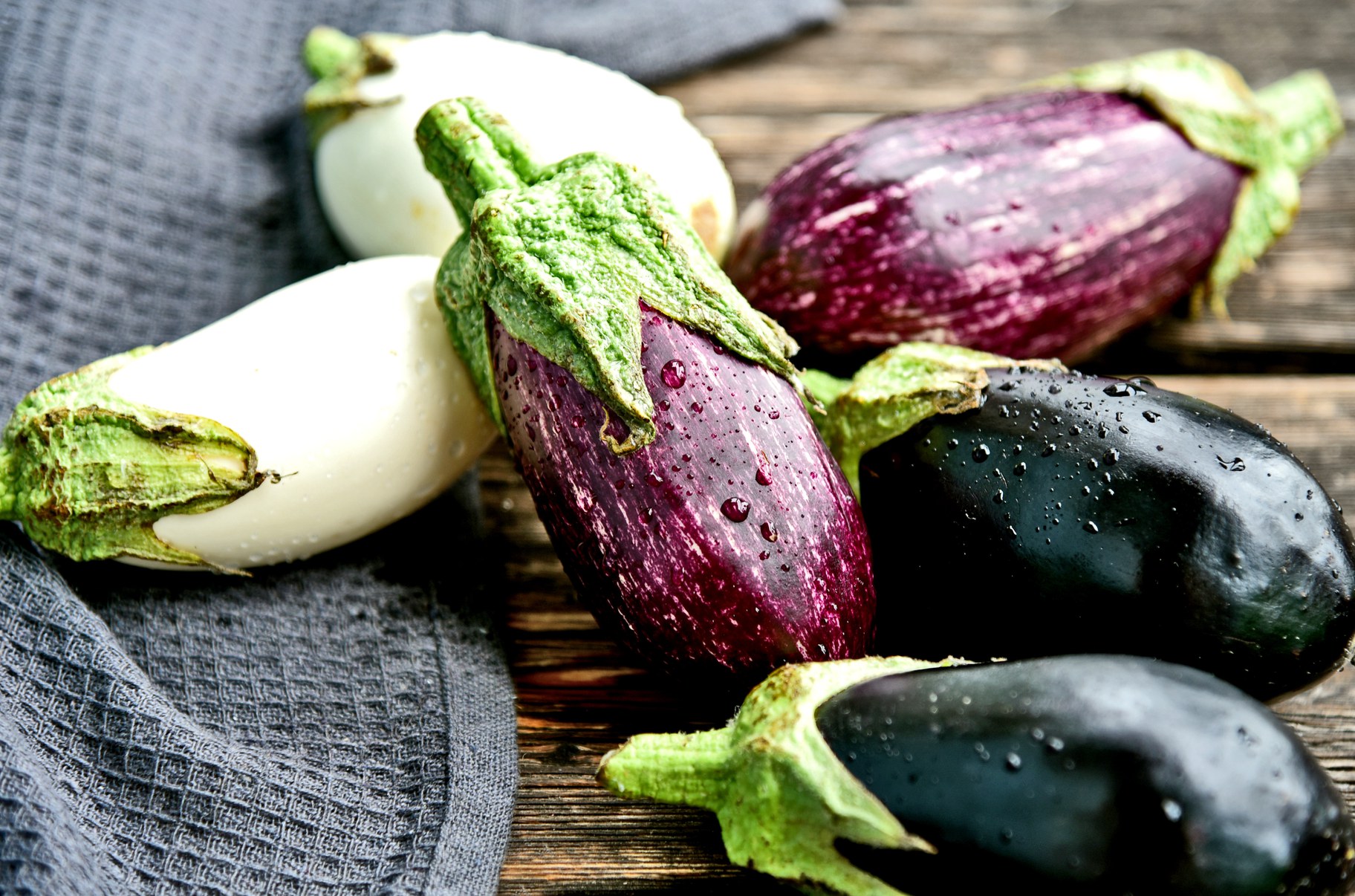 In choosing good quality eggplants, the skin should be smooth and shiny, and they should feel firm but not as hard as a rock. The color, whatever it is, should be vibrant, not muted. Photo by Shutterstock.

Once cooked, eggplant should be soft without a hint of leatheriness. And yes, I salt my eggplants. Often you hear that it’s to purge the eggplant of bitterness, but I also think it’s to remove a bit of the liquid from the spongy vegetable. For a sponge it is, especially if you’re frying it. Eggplants have a nearly unlimited capacity to absorb oil, which isn’t necessarily a bad thing if you’re making caponata, but you don’t want to go overboard and end up with a dish that’s literally swimming in oil.

After my eggplant sits with salt for an hour in a colander, I rinse it off and dry it by rolling it up in a towel. Then I fry it in enough oil so it floats. I use olive oil because I want that flavor. Despite warnings about frying with olive oil, it actually has a relatively high smoke point. The most important part of this process is lifting the fried eggplant out of the pan with a slotted spoon and letting it drain on paper towels so as to avoid a caponata swimming in oil.

A few years ago during a trip to Sicily, I opted to order the dish at every single meal except breakfast. It gave me the opportunity to experience many variations on the theme. Some came to the table warm, others were at room temperature. Some were swimming in oil and others seemed nearly dry. Even the way the eggplant was prepared was variable. Peel was left on or off, it was cut into substantial chunks or small dice. And the eggplant was accompanied by a variety of other vegetables and ingredients. Some reminded me of the splendid caponata that Angeli chef Kathy Ternay used to make with peppers and zucchini in addition to eggplant. Olives sometimes make an appearance and capers are always included, and in my opinion celery is a must. Its crunch, even when cooked, plays off the yielding texture of the eggplant. The sweet and sour balance is left to the taste of the cook.

My favorite version was made by the restaurant La Nicchia. It was a caponata made simply out of large peeled chunks of eggplant, enough celery to perceive the fresh green flavor, enough onions for natural sweetness, a hit of tomato for color and taste, all perfectly balanced between sweet and sour. The caponata was served warm and topped with chopped toasted almonds.

A great trick in their recipe is to cook the celery and onion together in a mixture of oil and water. This makes the process faster as it softens the celery more quickly and prevents it from picking up too much caramelization which would bring its characteristic bitterness. The water evaporates off and you sauté the onion and celery just until barely golden. Buon appetito!