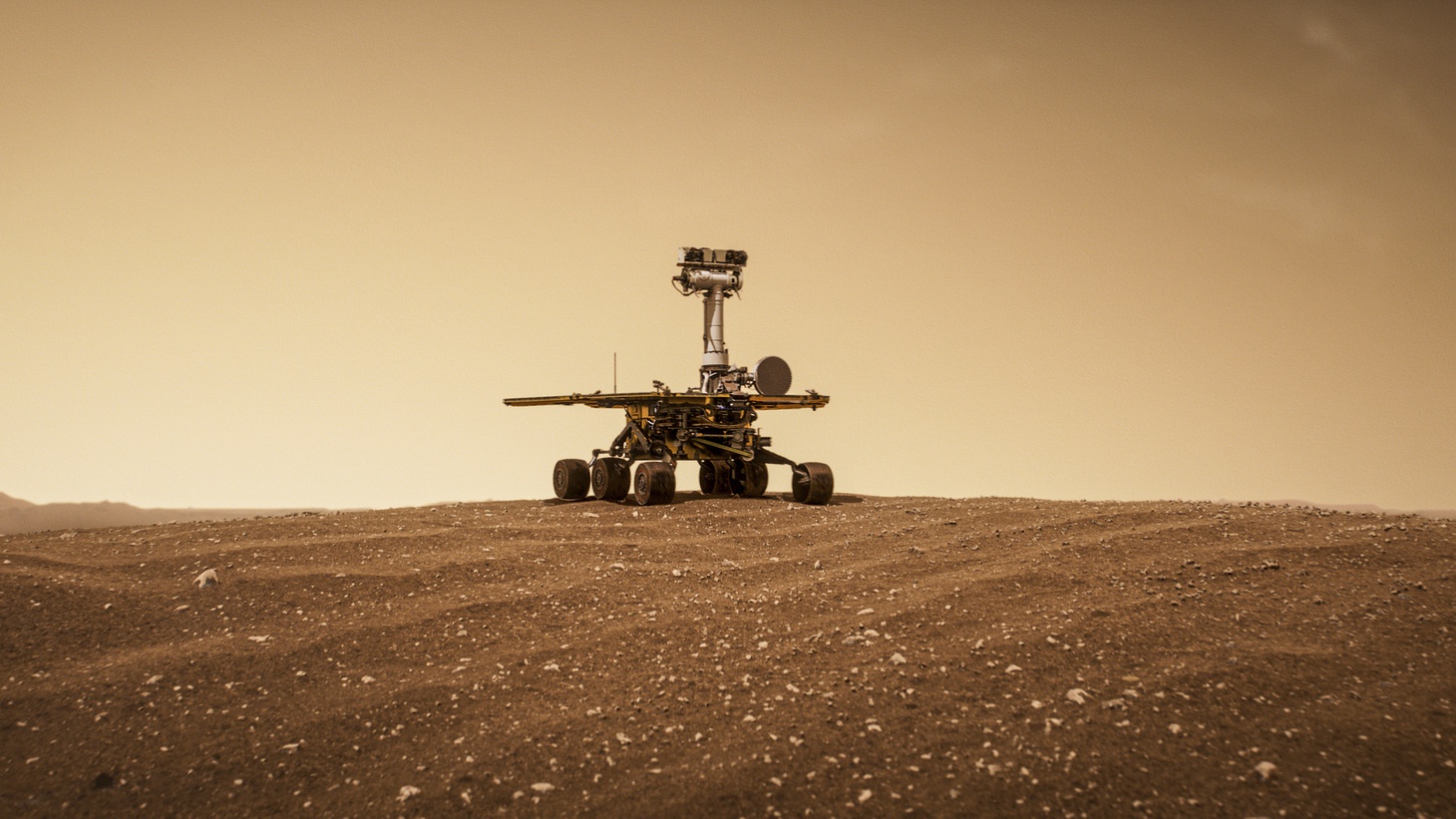 “Opportunity literally landed [on Mars], opened her eyes, and there was incredible science 20 feet right in front of her,” says NASA scientist Doug Ellison. Photo courtesy of Prime Video.

Nearly 20 years ago, NASA launched a twin pair of rovers to Mars. Six months and tens of millions of miles later, they landed on the Red Planet to look for past signs of water and life. The mission was supposed to last three months. But Opportunity, one of the rovers, far exceeded expectations and continued to roam the Martian desert, exploring craters and analyzing rocks for nearly 15 years.

During that time, scientists at NASA’s Jet Propulsion Lab in Pasadena formed such a close bond to the rover that when the mission unexpectedly ended in 2018, it was like losing a family member. Filmmaker Ryan White tells that story in a new documentary called “Good Night Oppy.” It debuts on Amazon Prime Video on November 23.

White tells KCRW that much of the attachment to the rovers stems from their human-like characteristics.

“They have a face, they have eyes. They have wheels that act as our legs, they have a mechanical arm that can take measurements. And so they very much look like an adorable, lovable creature, and are definitely anthropomorphized to a certain degree,” White explains.

According to NASA scientist Doug Ellison, they were designed that way on purpose. He points to their eyes that act much like human eyes.

“You want to have something that can trundle around to get the lay of the land and the pairs of cameras that look like eyes – that's entirely by design. Because it is by having pairs of eyes that humans can sense depth, we can sense the distance to things,” Ellison says. “You end up with … a cute robot. It is a human-scale robot, there is a cuteness to it. But it comes from a place of wanting to build mobile field geologists.”

Ellison notes that what made Opportunity particularly special was her ability to pass tests that her counterpart Spirit had trouble with.

“Along comes Opportunity a few weeks or months later and passes that test with flying colors. And that just carried to Mars somehow,” Ellison says. “Spirit had to cover miles and miles and miles to make amazing scientific discoveries, whereas Opportunity literally landed, opened her eyes, and there was incredible science 20 feet right in front of her.”

As engineering camera payload uplink lead, Ellison helped take hundreds of photos during the last 18 months of Opportunity's mission. That includes a series of shots she took of herself.

“The rovers predate the phrase ‘selfie.’ But that is exactly what we did. We took 17 images with a microscope turned around. And instead of looking at rocks right in front of it, it was looking at the rover right behind it. It came out better than I think most people were expecting. It's low resolution. It's black and white. It's fuzzy. But it is the first time that any of us had seen the rover at that point getting on for 16 years,” Ellison says.

“We took 17 images with a microscope turned around. And instead of looking at rocks right in front of it, it was looking at the rover right behind it. It came out better than I think most people were expecting. It's low resolution. It's black and white. It's fuzzy. But it is the first time that any of us had seen the rover at that point getting on for 16 years,” says NASA JPL scientist Doug Ellison. Photo courtesy of Prime Video.

Ellison adds that seeing the photos was like looking at an old friend: “You could see the tread on the front wheels at the front of the rover. You could see how dust had accumulated on the camera mast, but only in certain places, because there's tape that held wires in place. … You can see the cameras on top of the mast. You can see the antennas on the back of the rover.”

How filmmakers brought Mars to life

WIth the help of special effects company Industrial Light and Magic and the hundreds of thousands of photos and data collected over the years, the robots’ journey on Mars is translated to the big screen in “Good Night Oppy.”

“Each robot has nine cameras on her. So every day that she went through something that might be detailed in my film, we know exactly what it looked like. It's not a mystery anymore,” White explains. “The biggest compliments we've been receiving are from people like Doug, who spend every day working on the surface of Mars through their proxies, through their avatars, these robots and saying, ‘We never expected it to look this real.’”

The film details a number of mission-ending close calls. That includes times where Opportunity almost crashed into a steep crater, and where she almost got stuck in a sand dune.

The rover spent 15 years on Mars and traveled more than 25 miles across the planet’s surface. About 5,100 days into the mission, the Mars Reconnaissance Orbiter (which takes daily weather images of the planet’s surface) discovered a dust storm brewing. The storm ended up engulfing the entire planet.

“We went from having a rover that had all the solar power in the world — 600 Watt hours, right? Enough to recharge a laptop six times over. Loads of power. We could do anything we wanted. We could stay awake all day. We could drive. We could use the arm. We could take pictures — To you're done in about 10 days. We were not expecting something that harsh to happen that quickly. There was absolutely nothing we could have done,” Ellison says.

The last time scientists heard from Opportunity was in a message stating that its battery was low.

As Ellison recalls: “We had that last communications pass and hoped that maybe the rover might speak to us for another couple of days before essentially browning out. And then we tried for a little over six months to try and recover the rover. But sadly, we never heard from her again.”

Ellison remembers the last night, which he spent with several dozen others, including Abigail Fraeman, who worked on the mission since she was in high school.

“That last effort to talk to the rover — it felt like a wake. It felt like we were saying goodbye to a family member. It really really did. The emotions were all out there, and Ryan had access to every second of that roller coaster that we went through. And I'm glad that that footage is now out there for people to see because I think they can understand just how and why we seem to be in emotional turmoil over saying goodbye to what is essentially 400 pounds of metal.”

Ellison adds, “What you're saying goodbye to is the rewarding experience, the camaraderie of coming together as a team to do this incredible stuff that's on the absolute limit of the human experience, right? These robots were the first overland expeditions on another planet. And to see one of them come to an end, it was hard. It was really hard.”

Ellison says the team not only learned how to operate robots on the surface of another planet, but discovered ancient Martian aquatic history. Rovers found evidence of how rocks on the planet were formed by acidic waters, which Ellison compares to battery acid.

But through Opportunity’s years-long journey, scientists also learned that Mars was home to other forms of water.

“We found evidence of rocks that were laid down in the presence of neutral pH water — water you might even have been able to drink. And that speaks to a habitable environment. These robots were never really kitted out to find life. But what we did find was evidence on both sides of the planet, of the sorts of places where on Earth, we see life all the time.”

Today, Ellison is the planning team chief for the Curiosity rover. He says there’s still so much of Mars to explore.

“We are literally, with the Curiosity rover, crossing through different layers of sedimentary geological record. … We've almost done Opportunity's mission in more detail and backwards.”

The Perseverance rover, which is also on Mars currently, is collecting samples that scientists on Earth can study.

“Instead of trying to squeeze laboratories into something the size of a shoebox, we can use the entire scientific community, the resources of laboratories around the world, to pick apart these samples and truly figure out did Mars ever have life?”

NASA scientists had unexpected connection with Mars rovers. See it in new film

On Saturday, a gunman burst into LGBTQ bar Club Q and killed five people and injured 17 others. The suspect has a history with law enforcement, including a 2021 bomb threat.

A shooting at Colorado Springs bar Club Q left five people dead. Two worked at the establishment and another was a mother to an 11-year-old daughter.

A new documentary tells the story of Opportunity, a NASA rover that exceeded expectations, and explored and analyzed the planet’s surface for nearly 15 years.

As home cooks know, there will likely be hiccups and frustration when putting together a masterful Thanksgiving spread. Good Food host Evan Kleiman shares last-minute hacks.