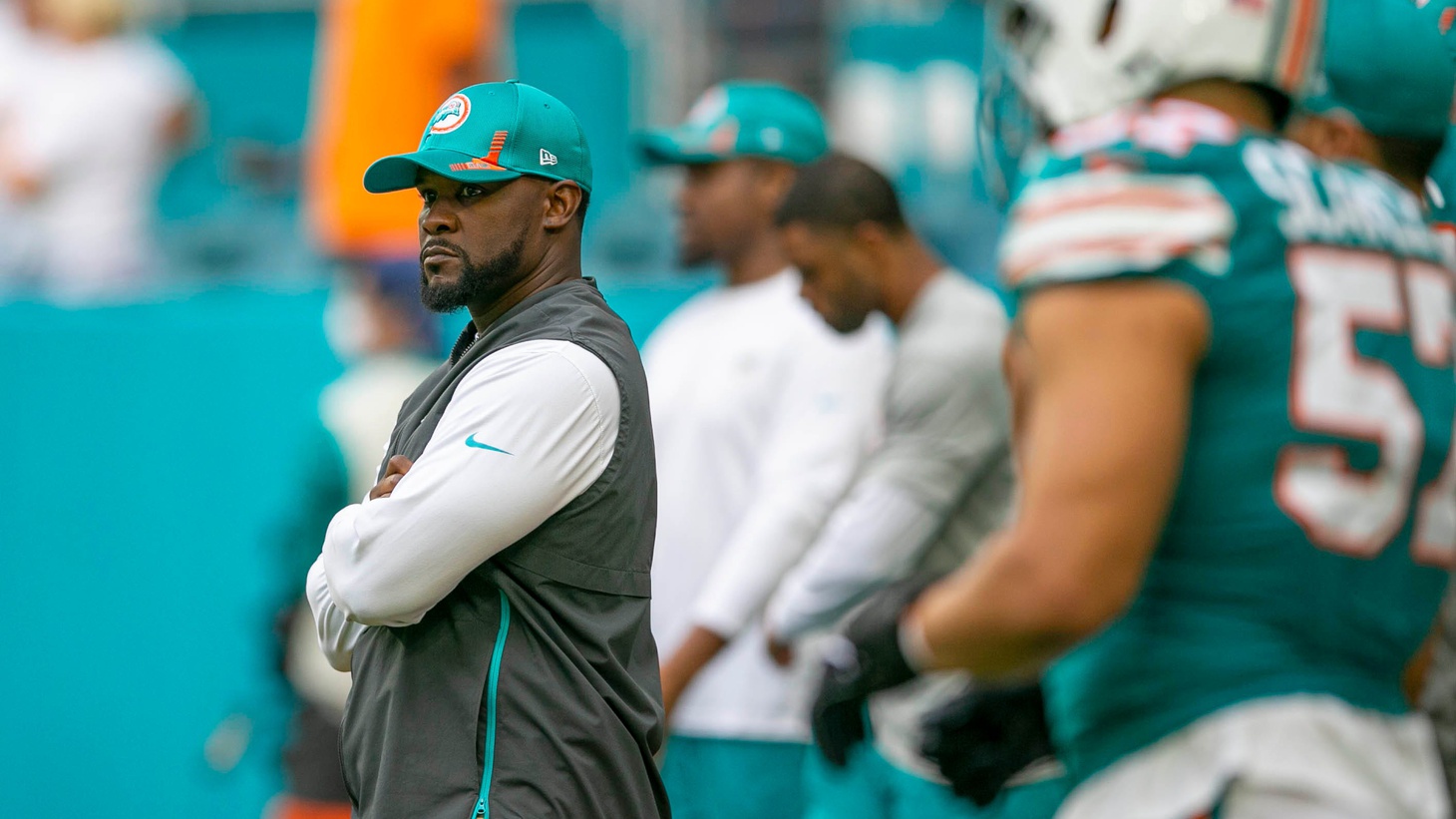 Brian Flores was fired in January as head coach for the Miami Dolphins after three seasons. This week, he filed a class-action lawsuit against the NFL and all 32 of its teams, alleging that their hiring practices discriminate against him and other Black coaches. It further claims that the Rooney Rule — the league’s approach to diversity that requires teams to interview candidates of color — is a sham.

Flores, 40, is a good plaintiff in this lawsuit because the Dolphins ended the season with a 9-8 record after starting on the wrong foot, says Kenneth Shropshire, a professor and the CEO of Arizona State University’s Global Sport Institute.

“The best plaintiff is always somebody that really is still in the middle of whatever the activity is, not someone who's [on the] outside and was once in, or is a failure,” he says.

Detailed in the lawsuit are two interview processes, one with the New York Giants and another with the Denver Broncos, which Flores alleges he was not legitimately interviewed for.

“Brian Flores worked for [head coach] Bill Belichick with the Patriots. And as this [coaching] job began to come down to the wire, Bill Belichick sent Brian Flores a text saying congratulations,” explains ESPN senior writer Howard Bryant. “Brian Flores hadn't yet interviewed for that job. And what apparently had happened was that he was congratulating Brian Flores for a job that Brian Daboll actually got, who was a white offensive coordinator with the Buffalo Bills.”

Why the NFL still needs the Rooney Rule

Shropshire says that despite calls for an end to the Rooney Rule, the NFL needs the tool because it has a majority African American player pool. Out of 32 teams, only one has a Black head coach.

“It's not working very well right now. And that's the lowest number, even at the inception of the Rooney Rule. The first couple of years, there were two or three. … We got up to the high of six, maybe eight, at one point,” Shropshire points out. “This is the most dismal moment after we had our woke, post-George Floyd pandemic year. It's really pathetic that this is where the league is.”

Bryant adds that there are plenty of Black position coaches, but rarely do they become head coaches.

He adds that the issue at hand with Flores’ lawsuit is a hiring procedure that is not being followed, despite the NFL long knowing that diversity problems exist.

“We're not really even talking about whether or not Brian Flores got hired or not. We're simply talking about an interview process. That's the first step here,” Bryan says. “So if you're going to go backwards from the interview process, that doesn't even mean he's getting a job. So it really does show you what's taking place here and why this is an important lawsuit.”

According to Bryant, the NFL says it’ll look more closely at Flores’ lawsuit, despite first claiming it had no merit. He says the response shows how ambivalent the league feels about diverse hiring: “The National Football League is extremely hostile toward hiring Black coaches at the top level. It's been this way from the beginning. They were the last league to integrate coaching, … and this is an issue that's been going on for 35 years now.”

*Feb. 4, 2022 correction: In this audio segment, a guest incorrectly stated that John Elway says he was impaired during a 2019 meeting with Brian Flores because he was recovering from the effects of Ivermectin. That account circulated on social media, but in fact Elway did not make that claim. A statement from Elway says, in part, "If I appeared 'disheveled,' as he claimed, it was because we had flown in during the middle of the night — immediately following another interview in Denver — and were going on a few hours of sleep to meet the only window provided to us."

Former Miami Dolphins head coach Brian Flores this week filed a class-action lawsuit against the NFL and all 32 of its teams, alleging that their hiring practices...

It appears that Republican Leonard Moty will be recalled from Shasta County’s Board of Supervisors, and be replaced by a militia-backed candidate.

‘Moonfall’ is ‘stupid but almost not stupid enough,’ says critic

Critics review new movie releases: “Moonfall,” “Jackass Forever,” “Alone With You,” and “The Worst Person in the World.”

Give Valentine’s love to LA women chefs at Eszett, Jar, and more

This Valentine’s Day, show your love to women-owned restaurants and food businesses. They’ll reciprocate with delicious treats for you and your partner or pal(s).