On Saturday, Rolling Stone magazine published an interview with the Mexican drug lord known as El Chapo. The interviewer? Not a seasoned journalist, but Sean Penn, the actor. El Chapo was captured last week after breaking out of prison, but Penn conducted his interview back in October, when the kingpin was still on the run. Apparently El Chapo did the interview at least in part because he wants a movie made about his life. The whole situation is so surreal, it sounds like a movie already. But not everyone is amused. We hear from a critic. 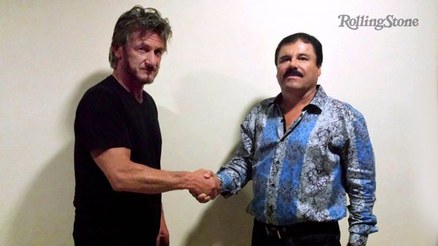 Bowie died on Sunday, two days after releasing his 25th studio album, “Black Star.” The album came out on his birthday. He had just turned 69. Born David Robert Jones in...

On Saturday, Rolling Stone magazine published an interview with the Mexican drug lord known as El Chapo. The interviewer? Not a seasoned journalist, but Sean Penn, the...

The Supreme Court heard arguments today in a case that could gut the power of public employee unions. The case is called Friedrichs v. California Teachers Association. And...

Bernie Madoff, Clark Rockefeller, Frank Abagnale, Charles Ponzi: All con artists able to deceive a lot of people out of a lot of money. We often look at the people who fall...

As is the case most years, the viewers were the real winners at last night’s Golden Globes. The Oscars’ drunk little brother was full of surprise wins, boozy celebs and of...