Will the pandemic change how we value motherhood? Four moms on juggling home and work life “You're supposed to have all the answers. You’re supposed to know exactly what to do. Even your partners are looking to you for that if you're in the mother role,” mom and family therapist Thea Monyeé says. Photo by Shutterstock

It’s hard enough to be a mom outside of a pandemic. Factor in lost jobs, reduced hours, juggling working from home with virtual learning, and anxiety about sending kids back to the classroom amid a late summer COVID surge — moms are in crisis right now. KCRW speaks with four moms from across the country to talk about how they’re doing and whether the pandemic can create a turning point in how society values motherhood on a policy-level.

Jennifer Haynes is a Rancho Cucamonga resident and a single mom of twin boys. She’s a self-described ‘self-care mom’ who works from home, and will step away for a change of scenery. But due to the pandemic, she says life at home has been busy. One of her sons is autistic and has a different learning style. It’s led to working hands-on with both her kids through virtual learning.

“With children at that age, they have to have that attention from you. They need to be able to have the time and patience in order to help them be successful because obviously, this pandemic has affected our children in a crazy way, as well as not being able to play with friends and connect. So it's been a well rounded job by itself, aside from work,” Haynes tells KCRW.

Haynes works as a caterer, and she says her last day working in the role was March 14, 2020. The job was a source of 95% of the household’s income. She pivoted into holding online cooking classes, but she says its earnings paled in comparison to her regular job.

Jessica Grose is a New York Times parenting columnist, as well as the editor of “The Primal Scream,” a series that focuses on the impact of the pandemic on working moms. She’s also the author of the forthcoming book “All Powerful And Totally Useless: The Creation of the Ideal American Mother.”

Grose says Haynes' experiences navigating through the pandemic is similar to what she’s heard from other moms.

“​​Moms are still just not okay. I talk to them every day. … Overall, they still have to do the majority of domestic work. The majority of childcare and the majority of them still have paid work outside the home. And trying to do all of those things at the same time is just much worse than it was before the pandemic,” Grose says. “We just piled this harder kind of experience on an experience of American parenting that was already much more difficult than it had to be.”

Grose is also a mom to two young girls. She says this last summer has felt like a breath of fresh air because they’re both at in-person summer camp. But with the delta variant spreading, she says she’s concerned.

“It just felt like I had this month of reprieve where things were semi-normal, and we were vaccinated, even though my kids couldn't be vaccinated, the case rates were pretty low here,” Grose says. “And now it just feels like it's all coming back. And I feel a little foolish for even having that six weeks, two months, whatever, where I felt relieved and optimistic.”

The economic and psychological effect on moms

Gema Zamarro is an economist at the University of Arkansas and the mother of two elementary school children. She also sent her children to summer camp, which provided momentary relief. Now, they’re surrounded by rising COVID cases in the state.

Zamarro says that typically, economic crises impact male-dominated sectors. In contrast, the pandemic has impacted the service sector, where more women and women of color often work. She adds that the closure of schools has left an undue burden on moms and has pushed them to take on heavier work at home with parenting and other domestic work.

“Even in two parent households, moms have been doing most of the work. What we see is that for one, they lost more jobs, [and] that also it’s taking them much more time to recover and find another job,” Zamarro says.

She adds that the pandemic losses women have experienced might even push gender equality in the labor back. 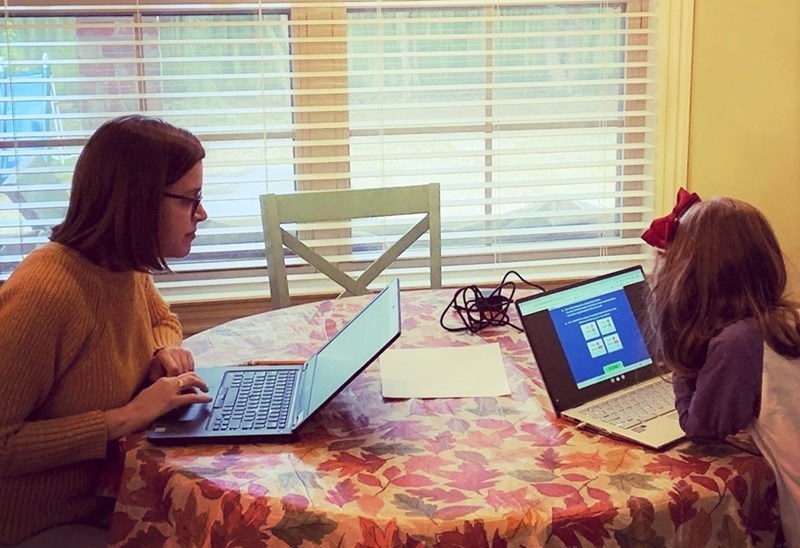 Gema Zamarro sits with her daughter while working at home. Photo courtesy of Gema Zamarro

Thea Monyeé is a family therapist in Pasadena and the mother of three teenage girls. She says that many moms have been gripping with the expectations of motherhood and not being able to be beacons of perfection.

“You're supposed to have all the answers. You’re supposed to know exactly what to do. Even your partners are looking to you for that if you're in the mother role. So this state of uncertainty which, in truth, we’re always uncertain — those of us who've been mothering for a while and know it's kind of a crapshoot most of the time,” Monyeé explains. “But this is a different level of uncertainty, right? This is like not being able to give your kid or yourself certain assurances.”

Monyeé adds, “It's definitely unleashed and revealed some deep, deep vulnerability and some cracks in that [motherhood] mythology that in truth, we were there before the pandemic, right? Mothers were stressed out. Too much was being put on them. Too much has been asked of them. But the pandemic has definitely widened those cracks.”

So what techniques can moms use to navigate through the anxiety and uncertainty of the pandemic? Monyeé recommends taking on a childlike approach to life and leaning into creativity and optimism. She says it could also help to admit feeling uncertain to family members.

“So just kind of releasing that authoritative role of all knowing and just admitting what we don't know,” Monyeé says. “Joining with our families in the ‘I don't know’ can still allow mothers and their children and their families to have a degree of joy that's not dependent on whether or not we wear the mask, or the mandates change, or whatever the news story is for that day.”

Monyeé explains that in her own life, she’s surrendered some of the control in her own home, such as cooking, to her daughters and husband.

“It gave me a chance to like, say, ‘Okay, there are things in my family that people here can hold. I do not have to hold everything. What don't I have to hold? What can people in this household also hold? How can they hold me? How can they take care of me? How can I be more honest about what I need and have more of a balanced relationship with them?’”

As a Black parent, Monyeé says grappling with the aftermath of the racial reckoning during the pandemic was a priority. She says she worked to navigate through the anger and grief in the aftermath of the Brianna Taylor verdict with her kids. She also points out that modern-day society isn’t built to emphasize mental health, especially in times of crisis.

“Mental health is sort of a litmus test of the values of a society. It'll reflect if a society is actually living according to its values, right? And so we cannot overturn centuries, decades of sexism, racism, wealth inequities in a year and a half,” Monyeé says. “That's the reason why we can't get back to some form of functionality. Because we did not design a country that put well-being at the forefront.”

She adds, “We don't know how to sustain a peaceful, equitable society, because we're trained to only think about ‘What do people need in a crisis situation’ as opposed to ‘What do we need ongoingly so that we don't end up in crisis?’“ 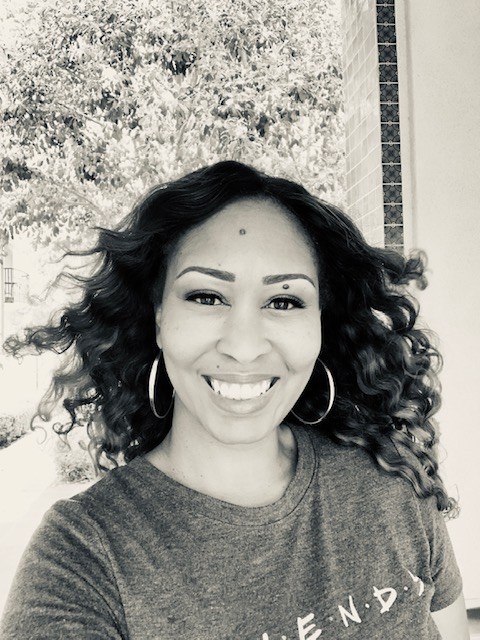 Grose says that in times of crisis, some families revert to old-fashioned gender roles. She credits that as one of the reasons women have taken up so many responsibilities in the household during the pandemic. Some men have stepped up, she admits, but that’s due to the stressors of the pandemic revealing the work women do at home.

Grose points out that there are some structural barriers that prevent dads from being fully involved, such as how women are penalized less for taking care of family in comparison to men by employers. But she notes that women are often negatively impacted when they have children in comparison to fathers.

Why the current system doesn’t work for moms

As schools and businesses reopen, Grose points out that there isn’t a lot of structural support in place for working moms. She uses the example of a lack of affordable childcare.

“I'm hearing places that had a waitlist of 20, now have a waitlist of 200 for daycare or after-care for elementary school kids. And in other places, there is an abundance of childcare spots, and not enough people who can afford to use them. And so I think we are entering this fall, there's not that much progress from where we were six months ago.”

Although the pandemic could be a prime opportunity for a re-examining of these systems, Grose says there isn't much energy on the Federal level to create systems of care that would provide help for communities. The last time there was big enough support was in 1971, when President Richard Nixon vetoed a Federal child care bill that passed in Congress.

She points out that it will take time to build a wrap around system that could provide enough care for families.

“I have heard energy, even from Republicans who don't often support big entitlement plans like this, it will take a lot of time to create a structure that before was just a patchwork of individual solutions across the country,” Grose says. “I am optimistic in the sense that we are finally talking about child care again. But to create an actual workable system and a funding system that could work could take a decade at best. It's not something you can just kind of pull out of thin air.”

Can the pandemic be a turning point in how we value motherhood?

Will the pandemic change how we value motherhood? Four moms on juggling home and work life

“You're supposed to have all the answers. You’re supposed to know exactly what to do. Even your partners are looking to you for that if you're in the mother role,” mom and...