Ellen Reid scored more than 20 miles of trails throughout Griffith Park for her app called "Ellen Reid SOUNDWALK." The music is GPS-enabled, so what you hear is based on your specific location in the park. Photo by Erin Baiano.

Picture yourself hiking in Griffith Park up to the observatory. You hear people talking, a dog’s leash jingling, birds chirping, and your shoes crunching on the dirt. Then a chorus of voices swells and there are faint sounds of heavy breathing underneath, almost in sync with your own breath. Then the strums of a harp come in.

The music is created by composer and sound artist Ellen Reid. She’s scored more than 20 miles of trails throughout Griffith Park for her app called "Ellen Reid SOUNDWALK."

How it works: You download the app on your phone before heading to the park. You hit play when you’re at the trailhead. The music is GPS-enabled, so what you hear is based on your specific location in the park. It’s like a curated soundtrack for your walk.

Reid launched the project in New York’s Central Park last year, and she has more “SOUNDWALKS” in the works.

She also won a Pulitzer Prize in 2019 for her debut opera “prism.”

Reid tells KCRW that she got the idea for this two years ago while jogging in New York’s Prospect Park.

“I was overwhelmed by the sense of meaning that I get from my running route, and thinking about the number of people that have these other associations with the same parts of the park,” Reid says. “I wondered if there is a way to create an art project that held space for this amazing multi-layered urban experience that exists in parks through time.”

That line of thinking inspired Reid to create a soundtrack to illuminate these urban landscapes and make space for one’s personal experience. After her Central Park project, Reid turned westward.

But Griffith Park, with its sprawling trails, sky-stroking vistas, and sloping peaks, provided an entirely different palette — and set of challenges — compared to the neatly-designed architecture of Frederick Law Olmsted’s Central Park.

“It's really strenuous to hike in Griffith Park, so the things I was playing with were about endurance and the challenges of climbing uphill,” Reid says. “How can those things work together into a soundscape that supports what you're doing, but leave space for whatever's happening around you?”

The results: “Steep Burning Ascent,” a chugging cacophony of horns, piano and percussion that kicks in at a steep incline approaching the Griffith Observatory; and sounds like the feeling of trying to catch your breath. 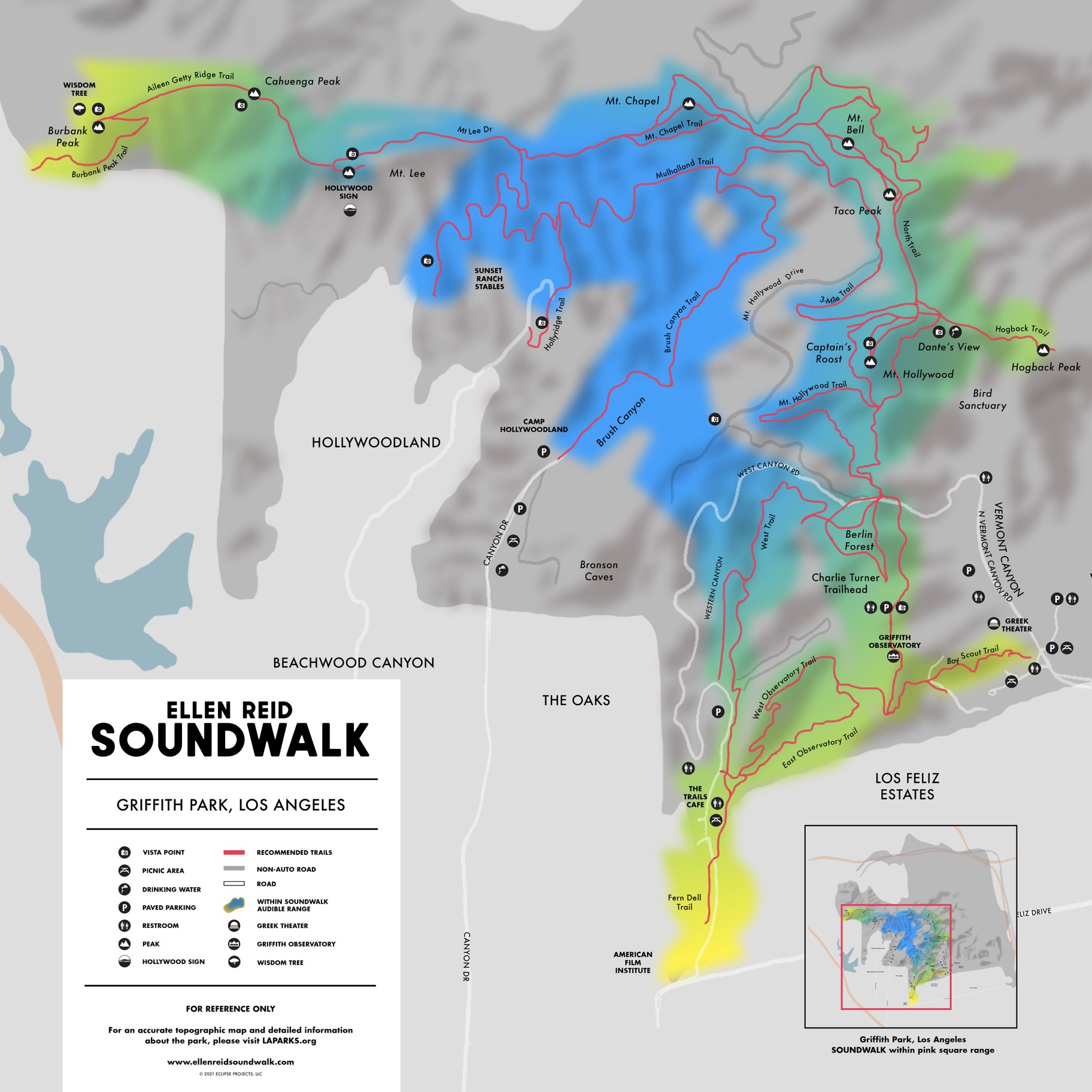 Besides the park’s varied topography, Reid’s composition process took into consideration the pacing and directions with which individuals might approach the terrain. Some people may walk, while others run. Some may climb uphill, while others may saunter across.

“I had to create this kind of spider web of connective tissue that works musically across the whole park,” she says. “I built a lot of micro scenarios of what the music could sound like, and walked them and logged miles and miles and miles, just testing the material in different ways.”

“West Coast Sky Forever,” for example, is a dreamy composition that features expanses of lush, raw strings performed by classical-experimental luminaries Kronos Quartet. The piece pops up at various vista points throughout the park, such as the approach to Captain’s Roost and a park bench view along the Brush Canyon Trail.

“I always say the music in this is like a kaleidoscope where there are all these different parts that tumble around and arrange themselves, depending on your pace, and where you hit those certain points,” Reid says.

The idea for “SOUNDWALK” took root before the coronavirus pandemic, but Reid says the circumstances accelerated the project’s development. Designed as a solo activity experienced through headphones,  it makes for an ideal outdoor adventure for socially-distanced times.

“It's a really different way of having to think about music than a concert experience, or scoring a film or something, where there's this very controlled experience and people are locked into this amount of time,” Reid says.