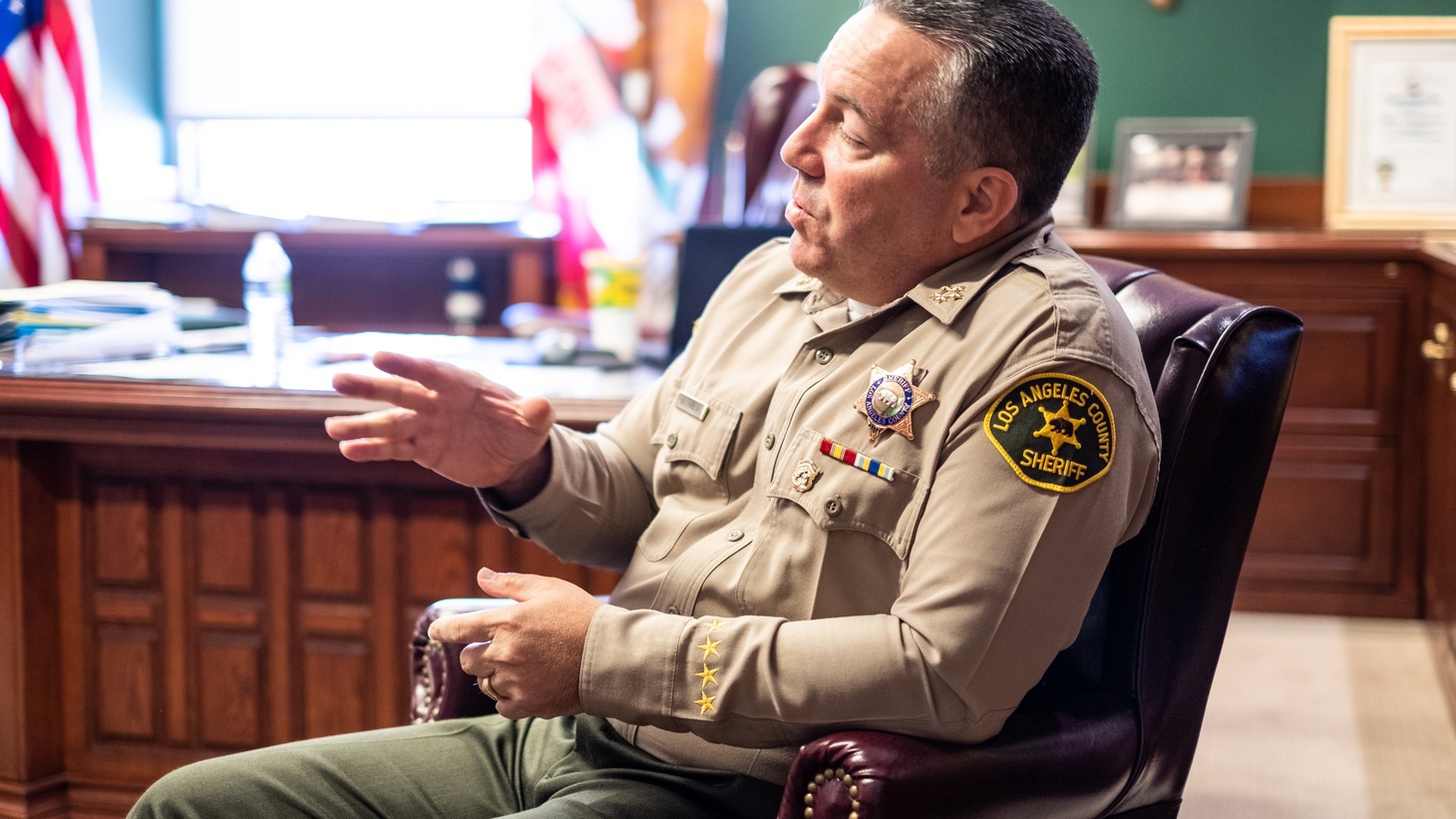 LA Sheriff Alex Villanueva has faced immense scrutiny over the last four years over denying the existence of deputy gangs and a series of misconduct among his rank-and-file. Photo by Amy Ta/KCRW

Since his 2018 election, Villanueva has faced scrutiny for denying the existence of deputy gangs, allegedly covering up an incident where a sheriff kneeled on an incarcerated person’s head, and most recently for publicly threatening to criminally investigate the reporter on that story.

It’s a far cry from four years ago, when Villanueva ran as a progressive reformer with the support and endorsement of the Democratic Party.

“Villanueva has really alienated so many people, from the Board of Supervisors to the Oversight Commission, to the voters,” says Laurie Levenson, professor of criminal law at Loyola Law School and a former federal prosecutor. “I mean, he didn't get enough votes to go ahead without a runoff. And there are many people who were running against him. If they consolidate for the lead candidate right now, Robert Luna, Villanueva is going to have a tough fight.”

She says she expects the Democratic Party to get more involved in ousting Villanueva, who’s been anything but the progressive law enforcement officer he portrayed himself as.

“In fact, he made a sharp right turn while he was in office. … There are a lot of people who are quite concerned about what his action has been on homelessness, a bit of grandstanding on that, where he's threatened to actually do an investigation against the inspector general. This is the kind of conduct that makes people worry. And you can add on to that the whole issue of the sheriff's gangs just recently.”

She says that rank-and-file sheriff’s deputies are worn out by Villanueva, and describes both the jails and streets as dysfunctional.

“I don't think anyone looks at the streets and say that they're safer. And the rank-and-file really initially backed him because he took the strong stance against COVID-19 vaccine mandates, but that's behind us now. And now the rank-and-file, all they know is that there's so much negative publicity that comes out every day against the sheriff, and it portrays the Sheriff's Department as a bunch of gang members.”

She points out that Villanueva’s rhetoric has been harmful too. “He has sort of this bully, and literally bully pulpit, where he makes nasty remarks about people on the progressive or liberal side. Well, he's running in a county that has a lot of liberal progressive and Democrats, and they don't take too well to that type of name calling.”

As for Robert Luna, who has a law enforcement background and served as the first Latino head of an agency in Long Beach, “he brings everything that Villanueva brought the first time, but not all the negative baggage that he has now,” Levenson says.

She notes that hopefully people are learning to look beyond campaign slogans to see what kind of person Luna really is, and who he’s surrounding himself with.