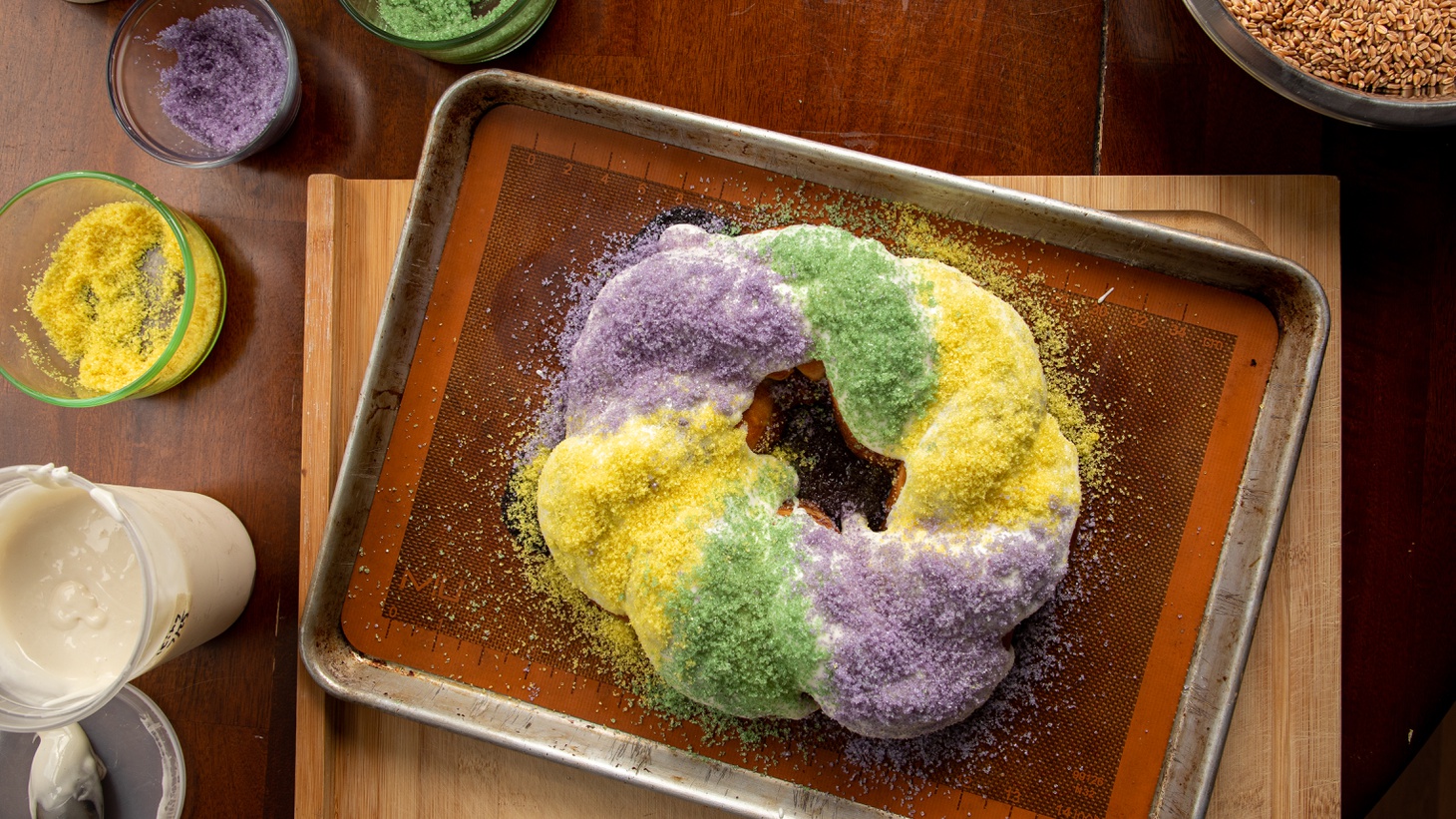 This king cake from Compagnon Bakery in New Orleans is topped with the traditional sugar decoration in the Mardi Gras triad of purple, green and gold. Photo by Randy Krause Schmidt.

Have you had your slice of king cake yet? If not, you better make plans soon because the rules of Mardi Gras say you only have from The Feast of the Epiphany on January 6 until Fat Tuesday, which falls on March 1 this year, to get your blinged-out rings of dough. If you’ve never been initiated into the world of king cake, you’re in for a treat. 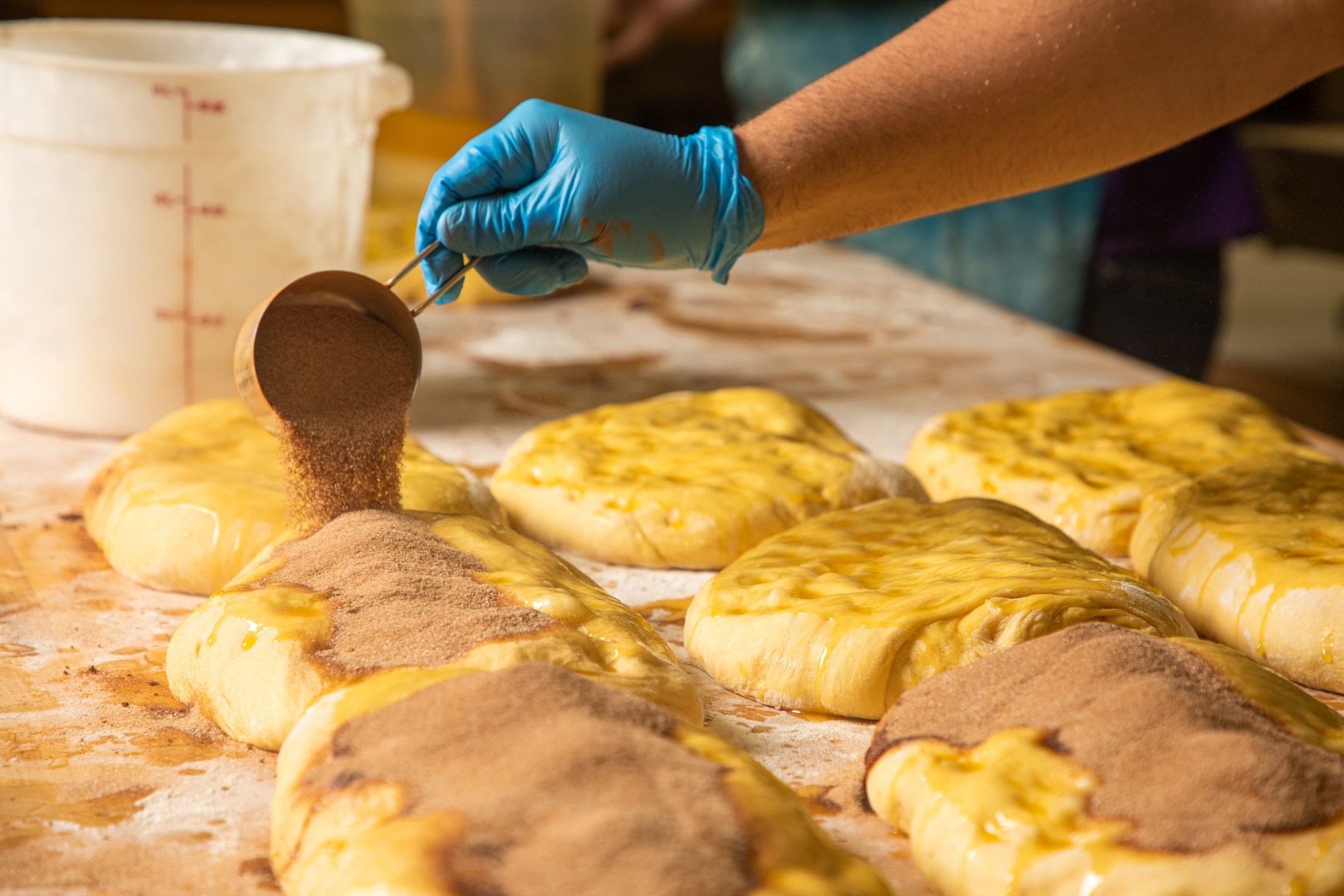 Like most pastry traditions, there is a great deal of variety, but add in the New Orleans vibe, and you have everything from simple icing-free rings of sweetened dough to filled enriched dough rings covered with edible bling. Fillings range from the traditional sweetened cream cheese to creations from pastry chefs.

The most traditional decoration is sugar in the Mardi Gras triad of purple, green and gold. But new bakers push the envelope by airbrushing luster over the dough — or use chocolate, caramel drizzles, or even fruit and whipped cream. Toppings can be spare or lavish.

There is a new coffee table book celebrating the tradition, variety, and community that surround the pastry in New Orleans. It’s called “The Big Book of King Cake: The Stories & Bakers Behind New Orleans’ Sweetest Tradition” by Matt Haines. It’s a love letter to this joyous New Orleans tradition. Haines tasted and documented the stories of 80 of the city’s notable offerings. It’s a life-affirming celebration of a New Orleans fundamental tradition.

Back to the cake and about those colors — one persistent myth about their origin begins in 1872 when the first Rex parade king chose them to honor the Russian Duke, Alexei Alexandrovich Romanoff. The Mardi Gras king of 1982 gave a meaning to each color: gold for power, purple for justice, and green for faith.

Where did the tradition start and what about that plastic baby? It all starts in Rome, with the ancient pagan free-for-all known as Saturnalia, where community feasting included a cake with a bean hidden inside. The person who found the bean became the king or queen of the day.

When Catholicism came into the picture, they found a perfect pivot for the cake. It went from celebrating the sun god to the Epiphany, the day three kings bring gifts to baby Jesus. Spanish, Portuguese and Southern French colonizers and settlers to Louisiana brought their traditions of roscón de reyes, bolo rei, and gȃteau de rois (cake of kings) to the area. The cakes were made of a rich dough baked in the shape of a ring and contained a bean. 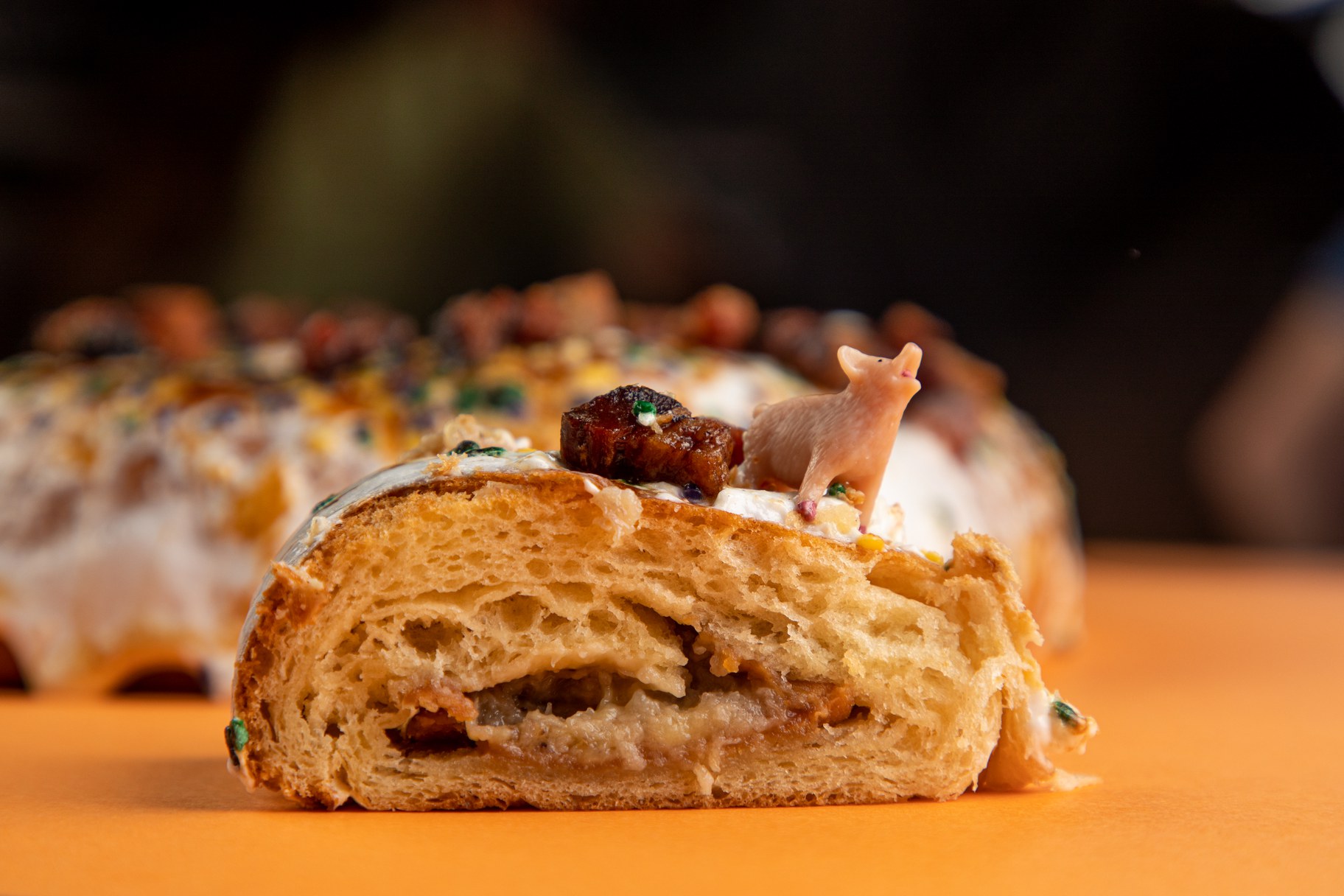 If you get the baby, or pig in the case of cakes at Cochon Butcher, you have to buy the king cake for your group’s next celebration. Photo by Randy Krause Schmidt.

Centuries later and the famed King Cake of New Orleans is richer, sweeter, more colorful, and the bean is now a plastic baby. If you get the baby, you have to bring the next king cake to your group celebration, since sharing the cake with friends and family is what it’s all about.

Start by making the cinnamon filing.

Next, it’s time to make your king cake dough.