Written by Amy Ta, produced by Bennett Purser May. 25, 2022 National 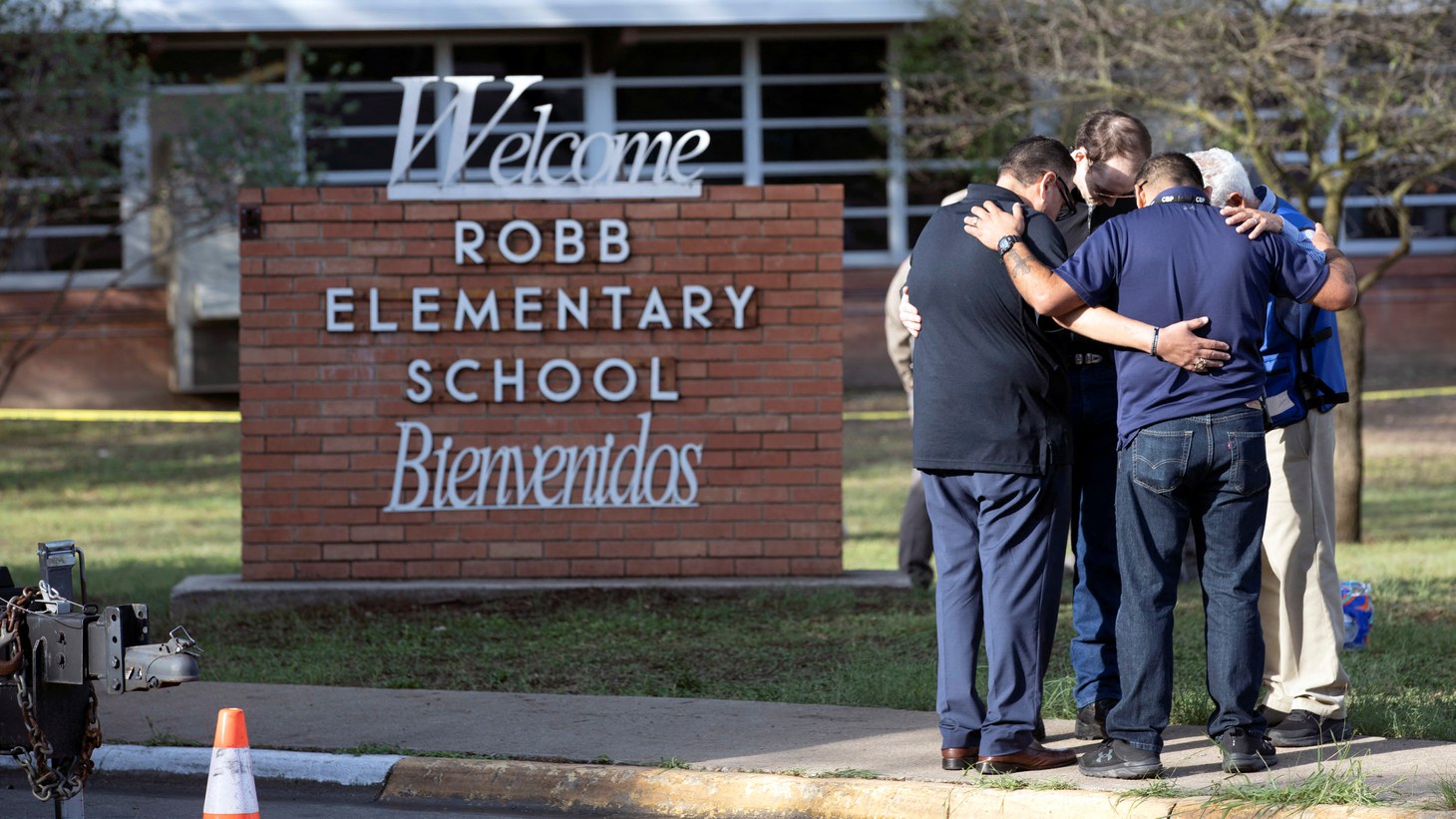 People gather at Robb Elementary School, the scene of a mass shooting in Uvalde, Texas, U.S., May 25, 2022. Photo by REUTERS/Nuri Vallbona.

An 18-year-old used a rifle to fatally shoot at least 19 children and two teachers at an elementary school in Uvalde, Texas, on Tuesday.

Those who died included 10-year-old Xavier Lopez, whose grandmother told ABC News that her grandson was the life of the party and loved making TikTok videos with his mother; 10-year-old Amerie Jo Garza, whose father told the New York Times that his daughter loved Play-Doh, was full of life and jokes and smiles; 10-year-old Jose Flores, Jr., who loved baseball and video games, and received an honor roll award just hours before his murder; and fourth grade teacher Eva Mireles, who reportedly died trying to protect her students.

To process the grief and trauma, KCRW turns to Rabbi Steve Leder, who leads Wilshire Boulevard Temple in Los Angeles.

He says it’s helpful for him personally to think of such a darkness as an eclipse. “Just like with an eclipse, we do know that there are these moments of real darkness and loss and pain. But none of that is literally more powerful than the power of the sun and the power of light, which will reveal itself again.”

However, many people are frustrated that not enough action has happened after multiple shootings. On May 14, a gunman opened fire at a supermarket in Buffalo, New York, killing 10 people. How does Leder cut through the sense of hopelessness?

He responds, “Until we deal with gun culture, with violence culture, with misanthropy and hatred, and the othering of people who are different than us — the people who live in that world will always have access to guns and be able to murder the innocent. I think mental health and the general ethos of our country have to be addressed.”

He adds that a psychiatrist told him on Tuesday night that no one suddenly snaps and talks into a classroom to murder people. There are always warning signs.

“We need to be paying attention in a way we have not been. There's this beautiful Buddhist saying … ‘tend the part of the garden you can reach.’ We can all reach within our own sphere of influence, to take care of the mental health of the people we love. … The root cause [of violence] is this misanthropy, this objectification of the other, and whatever part of the garden you can tend to [and] root that out, root it out.”

How can parents talk to their kids about shootings and trauma?

Leder says he would not discuss this with very young children, but for older ones who see the news, it’s important to remind them that this does not accurately reflect the world.

“Most people in the world and in our country are good. Most people … even with mental health problems, do not take assault rifles into fourth grade classrooms and kill 19 people. … If we don't affirm for our children the fundamental goodness, despite the eclipses in life, then we're going to steal their souls from them. And we don't want to do that.”

After Tuesday’s mass shooting in Uvalde, Texas, that took the lives of 19 students and two educators, LA’s Rabbi Steve Leder explains why there’s still hope in this dark...

Democrats tend to push for gun restrictions and assault rifle bans, while Republicans say it’s better to boost school security and/or arm teachers. What would effectively...

George Carlin was known for his brash humor and political commentary. He’s the subject of Judd Apatow and Michael Bonfiglio’s new HBO film.